Microsoft reveals how their next console will reduce tricky input latency. Microsoft has released a minor treasure trove of details this morning concerning their upcoming Xbox Series X, to include how the console will address input latency. Over on Xbox Wire, Microsoft shared a detailed report that broke down how the company aims to reduce input latency across the console, controller, and even the television itself. It’s a rather technical read, but it can be boiled down to a handful of simple points.

The Xbox Series X controller has been built with input latency in mind, abandoning the tried-and-true methods of yesterday for a new “Dynamic Latency Input (DLI)” delivery system. Essentially, older controllers collected and broadcast inputs in eight millisecond intervals, which meant rapid changes to analog inputs would sometimes go ignored if they didn’t make the most recent transmission window.

With the new Xbox Series X controller inputs will instead be delivered “just in time,” or right before the console asks for them. A game can pull every button, stick, or trigger change that occurred between broadcasts as well, further reducing latency. Microsoft has opted to keep their radio protocol for controllers, stating it provided more advantages than the alternatives.

The Xbox Series X console itself has “decoupled” the rendering pipeline from the latency pipeline, allowing them to work independently of one another. According to Microsoft, this means games can now track input states across every frame sent over HDMI, meaning developers no longer need to measure or tune end-to-end latency via the use of a high-speed camera. An second advantage that comes from this change is the Xbox Series X console itself can support 120 frames-per-second. 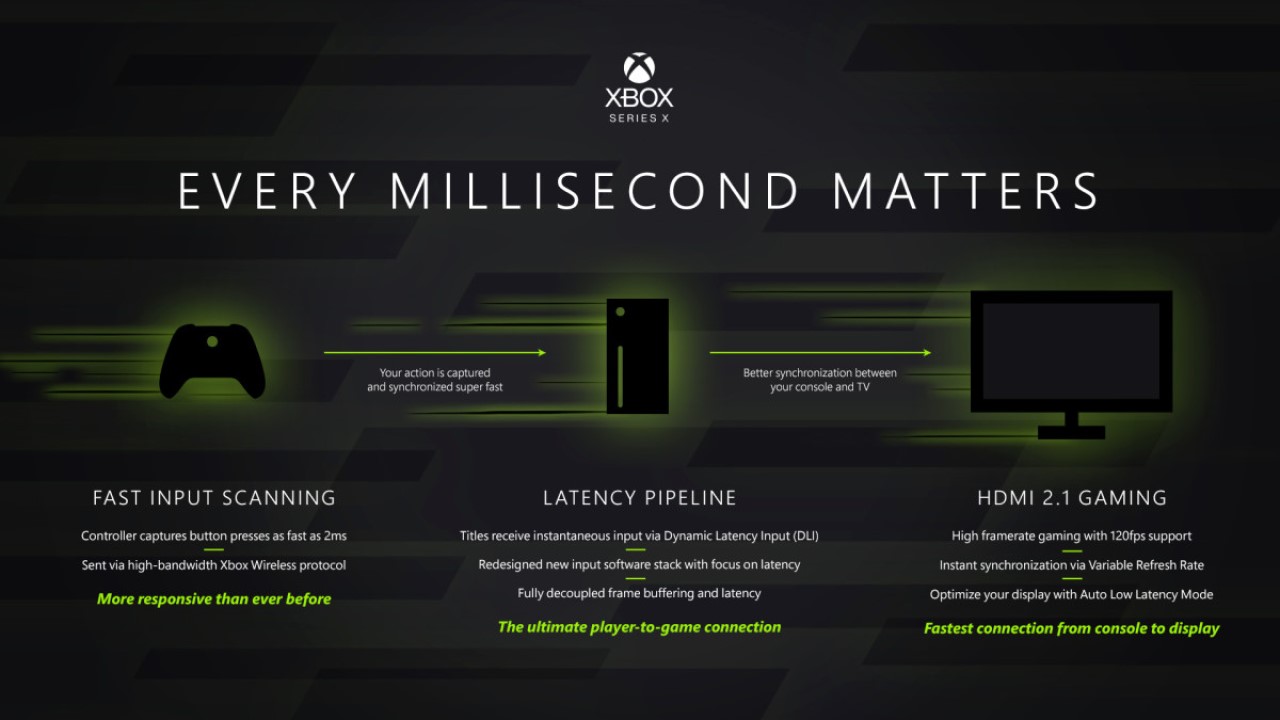 Microsoft has also spent time working with TV manufacturers and the HDMI consortium to ensure HDMI 2.1 standards supported these new features, and that they were included in TVs as early as last year (thus allowing more Xbox Series X owners access to these new bells-and-whistles without having to wait years after release for TVs to adopt these new standards). Things like Variable Refresh Rate (think G-Sync and FreeSync, where the display’s refresh rate is tied to a game’s framerate), automatic enabling of Game Mode on capable TVs (which dramatically reduces input latency as compared to normal display modes), and reduced frame transmission means even your TV will help cull the input clutter.

Microsoft confirmed every Xbox Series X will come with an ultra high speed HDMI 2.1 cable, though it’s on gamers to purchase an HDMI 2.1 compatible display if they wish to take advantage of the TV features. The console and controller tweaks will work for everyone, regardless of the television the console in wired into.

The Xbox Wire article goes a little further into the details, so I recommend reading it if you enjoy knowing the nitty-gritty facts. Just considering their efforts to reduce input latency, add HDR support across all titles, and support ray-tracing it seems Microsoft is poised to dominate the technical side of the next console generation. It will be interesting to see how Sony counters this in the coming weeks and months, but right now it seems Microsoft isn’t keen on letting up on the gas.