The latest news in the world of video games at Attack of the Fanboy
April 30th, 2015 by Dean James 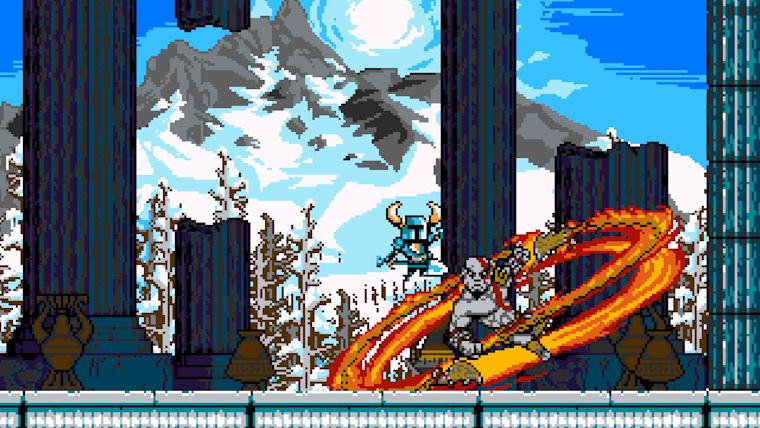 Shovel Knight is now available for just about every platform you can think of, with the game finally arriving on all PlayStation platforms last week. With that release came a bonus boss fight and unlockable weapon that is quite hidden in the game. After playing fully through the game, I thought I would give you a breakdown on just how to find Kratos in the game.

After awhile into the game, you will find a space on the map that is known as the Hall of Champions. To enter this area, make sure you have 5,000 gold to enter. At first you may think it is just full of ghosts that can’t be defeated, but you must actually traverse the entire building to clear it of ghosts. This is done by hitting the glowing orbs found throughout the stage with your shovel. This will bounce them into air and the lightwave must hit a ghost to destroy it. Make sure to check every nook and cranny for either ghosts or even an orb.

Once you have cleared any given room, it will light up and you can move on to the next. This is rather simple to do, though a little time consuming. After defeating all ghosts and clearing every room, you will face off against a giant ghost boss in the upper middle room. After defeating him, you can now access where Kratos is, but it is very hidden.

Now move to the very right side and jump up on the step to the right. Walk as far up to the wall and you can and then use your Shovel Drop move on the drop. This will open up a hidden path to the right. Go to this room and pick up the special Kratos scroll. Now exit the stage completely by walking back through it, so you don’t lose your new treasure.

After retrieving this scroll, you will find Kratos moving around the map like with the other random fights from before. Move over to this and you will instantly begin your two-part battle with Kratos. Neither part is too hard as long as you are careful.

After defeating Kratos, you will receive an item that you can take to the Armorer at the Armor Outpost to receive the Armor of Chaos, which upgrades your attacks to be more like Kratos, including more range on your shovel.