A beautiful novella in an underexplored world. 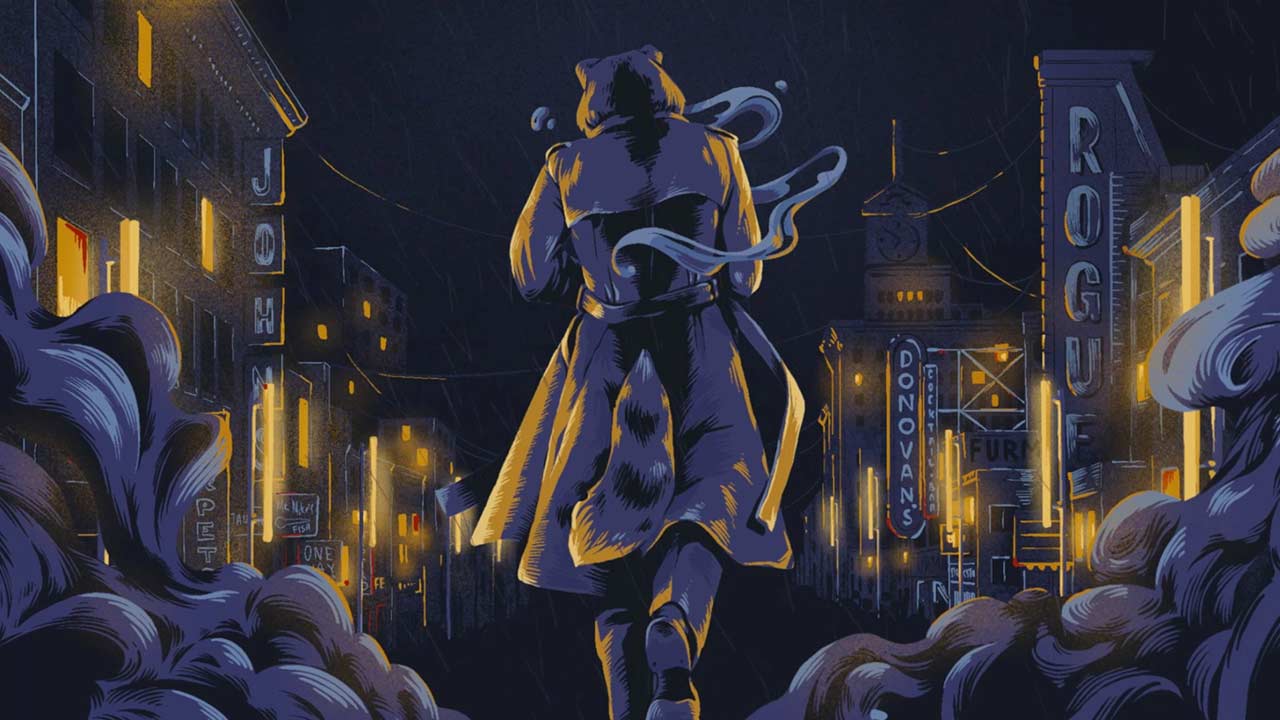 The “point and click revival” is a topic that comes up every few years. It is a genre of games that people are often excited to return to with titles being developed every so often that seek to return in some way to the CRPG’s roots. Games like Dropsy and Deponia (now almost a decade old) seem like they were tailor-made to scratch our nostalgic Monkey Island itch while games like Papers Please flipped the script and brought some seriously inventive stuff to the genre. Backbone does both, striking a balance between nostalgic and new, breathing another breath of life into the genre with its gritty, sad grin. This 2D, sidescrolling, pixel-art noir is a short but solid adventure mystery with stunning visuals and meaningful characters.

Backbone is a solid adventure mystery with stunning visuals and meaningful characters.

The premise of Backbone is more or less straightforward: you are a raccoon detective named Howard Lotor in an animal world. In this world, different animals are afforded different positions within society with raccoons standing only slightly above rodents (like rabbits, mice, etc.) but below carnivores (like bears and wolves) and far below the Apes. Apes and carnivores have access to the best housing, the best food, and the best opportunities for their families while those below them are often shown scraping to get by. All characters (referred to a people and persons throughout) belong to their species, known as their Kind, and many interactions between characters the player and the world focus on the characters’ place within the Kind caste system. One of Howard’s first confrontations is with a bear bouncer who refuses him entry to a swanky bar on account of being a raccoon (“No stripers allowed!”). Later, he meets a rabbit scientist, a member of that lowest “rodent” class, who states that under normal circumstances, her Kind having such a job is frowned upon and borderline illegal. 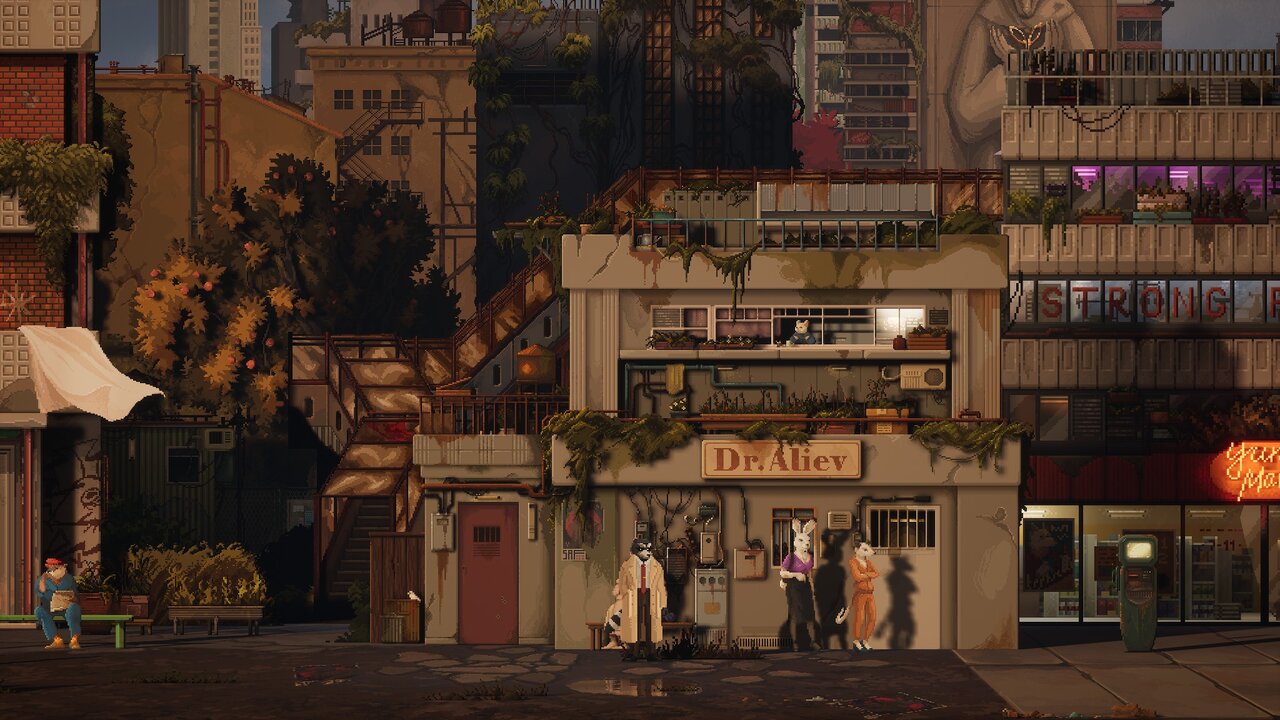 Backbone’s story takes place in The City, a dystopian, isolationist society that is visually and geographically based on Vancouver, Canada. The name “Vancouver” is never explicitly used in the game, but the game’s map is identical allowing players to draw their own conclusions. The Apes rule over this dystopian city as its sole political class, citing the teachings of the city’s god, The Shephard, and its teachings as the foundation for their rule. They forbid residents from leaving the city and have erected a series of massive walls surrounding it.  The player learns early from other characters that climbing The City’s walls is known to be impossible and that attempting to leave The City is strictly forbidden, punishable by death. Throughout the game, no one seems to know what just lies beyond the wall, nor anything of the world beyond it. 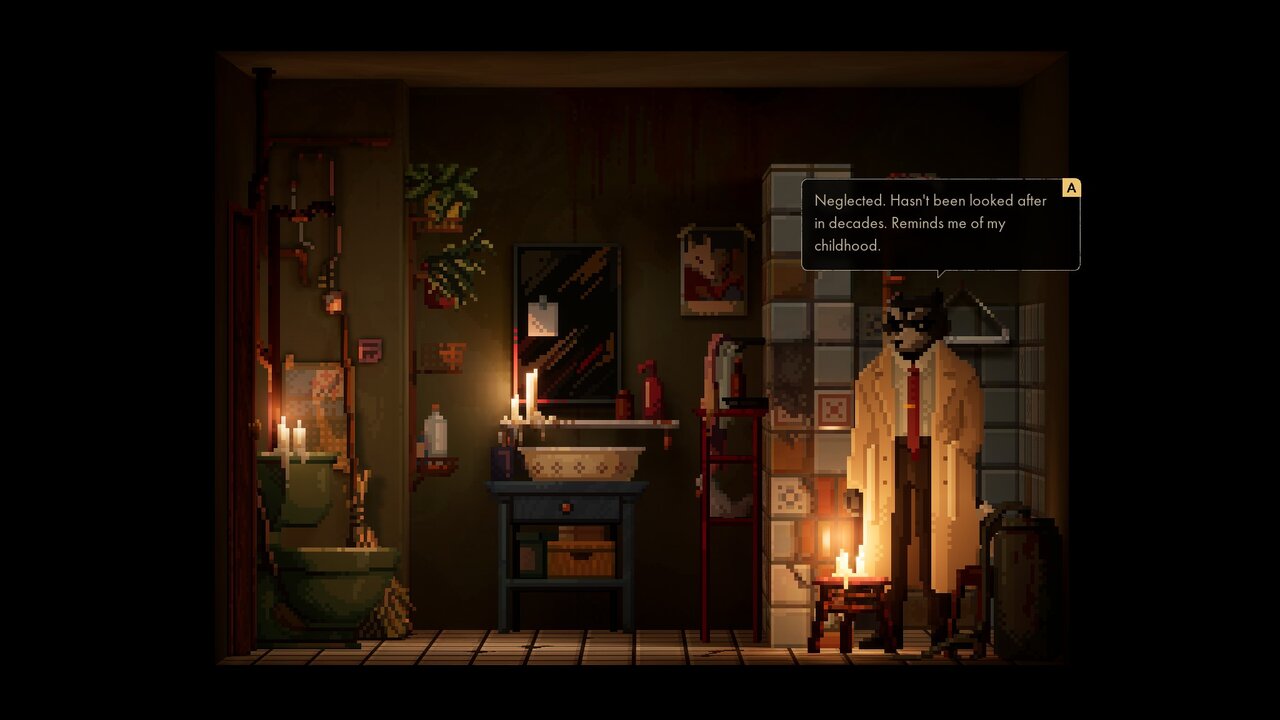 Enter: Howie. As mentioned before, he’s a raccoon. He’s also a detective, a private investigator armed only with a weak stomach and a degree in photography. He loves his Mom (but doesn’t call her very often) and he’s been doing his best, helping people with small-scale investigations. The player is first introduced to Howie as he is preparing to meet with his latest client, an otter named Odette who suspects that her husband Jeremy may be cheating on her. The player and Howie are then tasked with finding the husband and figuring out what he’s been up to, a simple case it seems. However, the case gets complicated fast as it is soon discovered that Jeremy’s favorite place to live-it-up is also where he would die-it-up. Howie finds Jeremy’s corpse in the bar’s basement and soon after learns about some seriously messed up stuff happening in The City’s halls of power. Howie gets the hell out of there, vomits for the first of many times, and then begins to drown his sorrow as the title card rolls for Act II. The game from there is yours to discover but its core gameplay, visual elements, and other systems are discussed further below.

This game is very pretty. It has a concise and well-defined mood (described as “neo-noir”) that is executed perfectly by its visuals and well by its soundtrack. As mentioned above, Backbone is a 2D, pixel-art sidescroller. However, it also features quite a few stunning 3D effects such as dynamic lighting, volumetric fog, falling rain, and some water animations that are smooth as butter. The combination is beautiful and pleasantly disorienting, it adds depth and visual intrigue to every scene. Shadows mix with shadows and light reflects off surfaces that at first glance looked entirely flat to create a signature look fitting of the game’s noir heritage. 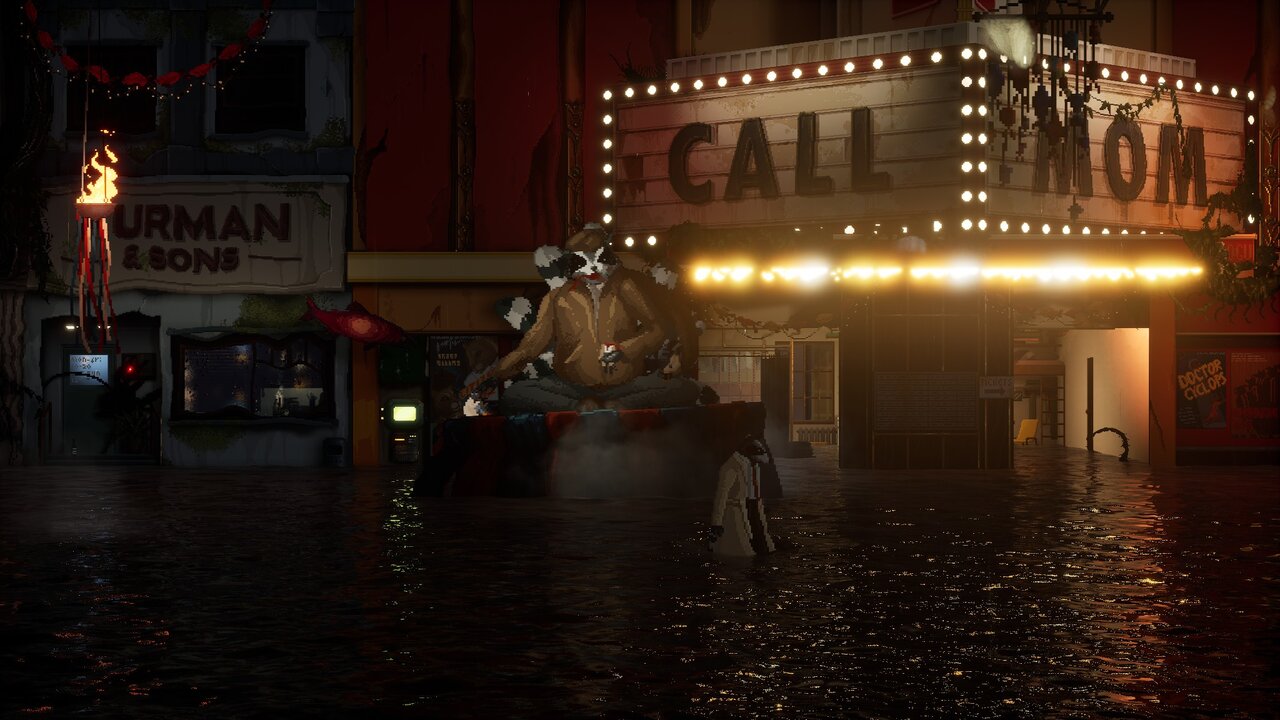 The game’s music is also quite good, but not really the same caliber of impressive. Backbone’s brooding doom jazz was a great listen, but occasionally absent in excess of the noir genre’s standard musical minimalism. When in longer conversations, tracks that were rolling in the background have a tendency to start and not start back up which feels more than a little awkward. Arooj Aftab, Nikita Danshin, and the game’s other musicians put together a gripping soundtrack that made for a rich, melancholy atmosphere, but with stops and starts that felt more accidental than purposeful. There are however two particular examples, both of which are macabre reveals, where this suddenness played perfectly into the moment. Not all bad by a long shot.

Chasing leads that continually expand on the mystery of Backbone is the premise of this adventure game.

Most of the gameplay of Backbone boils down to walking and talking to your fellow critters on a beautifully set, pixel-art stage. After finding Jeremy’s corpse, Howie decides to uncover more about a conspiracy that he believes Jeremy was the unfortunate victim of. He does this by finding and following other leads, traveling to The City’s different districts, and meeting with other people caught up or complicit in the unfolding mystery. Howie can talk to certain characters who will give him clues or further build out the world. Often, these characters will not be entirely forthcoming with their information, requiring Howie to put on his (semi-existent) charm. For example, in an early scene, a dog named Colbie had seen the late Jeremy earlier in the bar that the player is scoping out. However, Colbie will only “remember” this fact after Howie has gotten to know her a bit, talking to her for a few dialogue lines about the musician playing at the bar that night and the kind of music she likes. Before this, using Howie’s other dialogue options will result in Colbie simply saying “I don’t know”. There’s always multiple things you can make Howie say. Some of them help you progress the plot, some of them are comfortably absurd, and some are just rude. In conversations, my Howie was somewhere in the middle: not dumb enough to get himself killed by not smart enough to keep his mouth shut. Conversations made up the bulk of the worldbuilding and objective finding while adding a welcome level of both humor and thoughtfulness, even if most ended up feeling a little railroaded. Interactions in the fourth act in particular felt very wholesome and genuine, a breath of fresh air at that particular point in the story. Backbone also makes you “commit” to most of your dialogue choices in a way that adds gravity to decisions and encourages attentive reading. Unlike a lot of conversation-heavy games, a lot of conversations, even just flavor ones, can only be had once.

It’s not just conversations, there’s plenty more to investigate in this world

Besides conversations, there are many other points of interest in the world to interact with. Most of these are gold-rimmed, black UI bubbles that reward the player’s investigations with a musing or observation out of Howie’s lonely, thoughtful mind. Some of these will prompt Howie to do an action, such as pocketing as a napkin, petting a goose (called a geezer), or prompting one of those talking wall fish for a showerthought. This is the game’s quintessential point-and-click mechanic, standard to the genre and not executed in any specifically unique way. If it ain’t broke, don’t fix it. 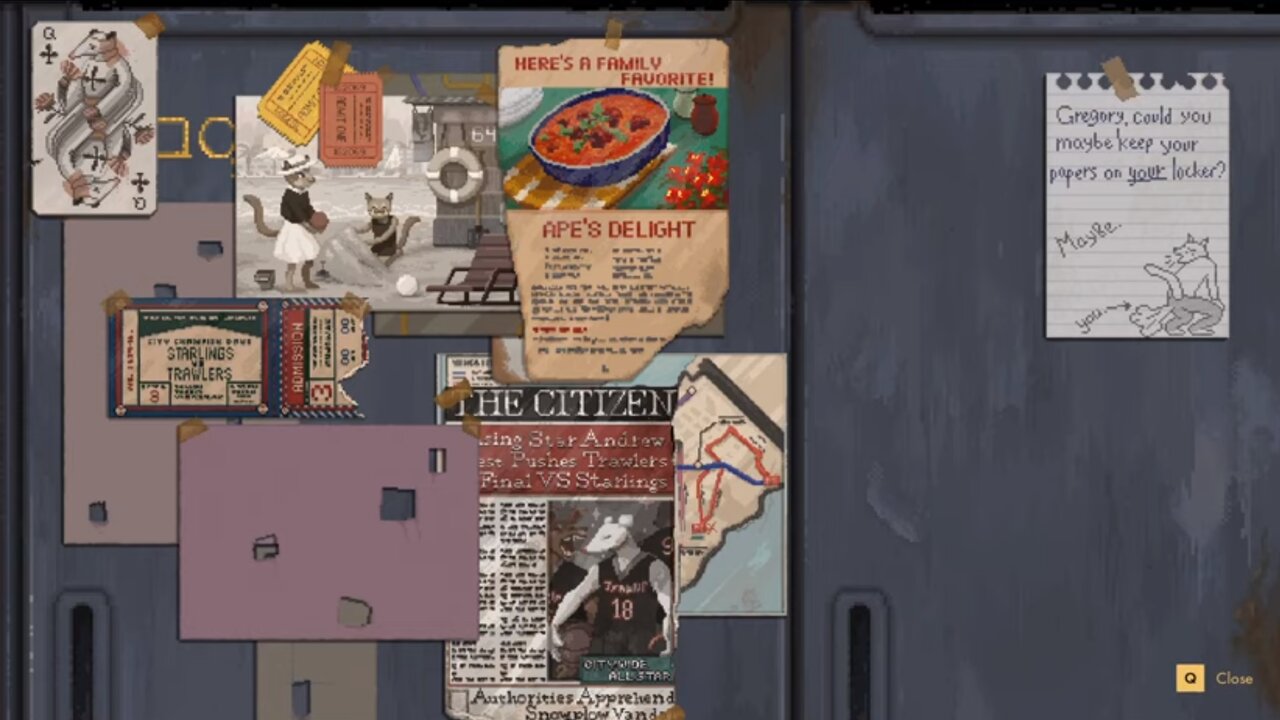 The game includes a couple of fairly interesting puzzles that require any number of the above mechanics in unison to solve them and progress. There are some that require point-and-click plus dragging items around the screen in search of patterns, others that require you to read books, (ew) and still others that feel like a memory game that you could just solve by dialogue-mashing. They are overall interesting but there are only one or two that are really memorable, with arguably the best one being the first. (Also maybe selecting the right kind of tea for Renee is a puzzle? Unclear. Pick hibiscus.)

Finally, there are the game’s stealth sequences which certainly leave something to be desired. There’s not too much to say on this front other than you will encounter them, they’re a little uninspiring, and you probably will only get caught once. That being said, they don’t take anything away from the game, so no harm no fowl. 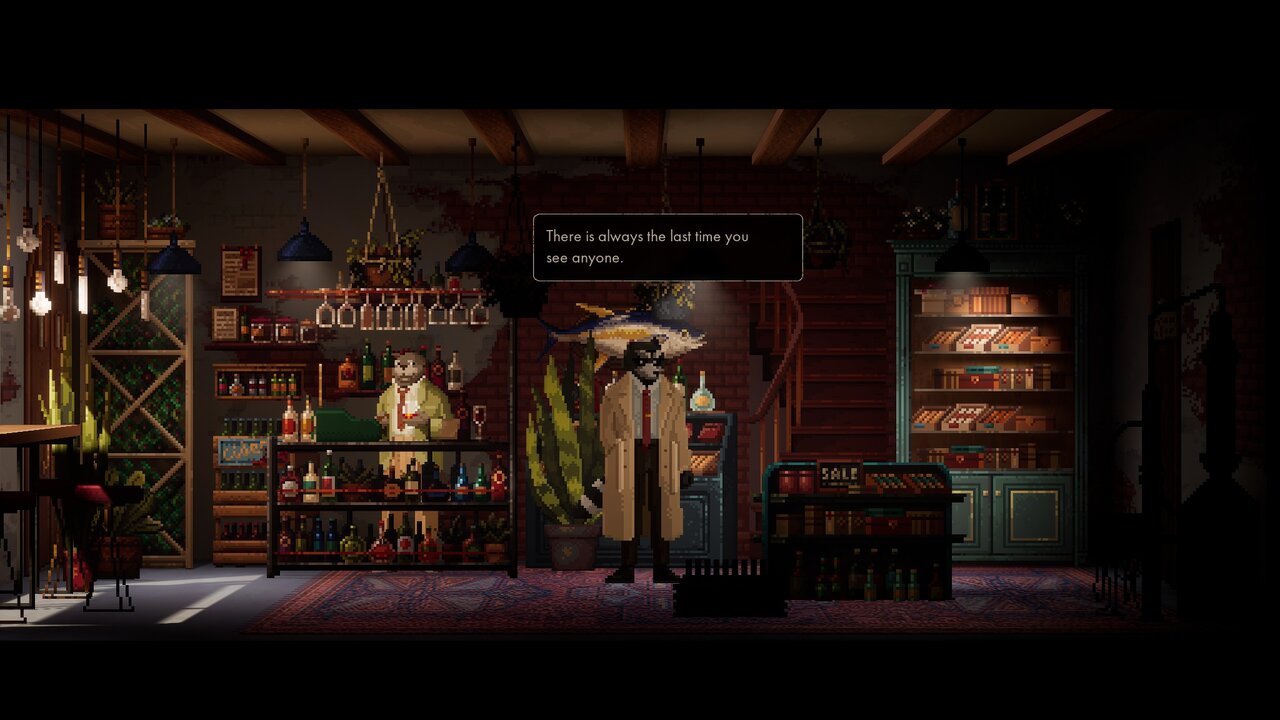 Backbone is a story told through its characters. It’s a game where you really should talk to everyone you see, not because you need to, but because you’ll genuinely enjoy it. Many of the game’s NPCs have some extensive dialogue to read, backstories to uncover, and interesting interactions to be had with Howie. Chapter IV is the most obvious example of this (and also the most rewarding) but characters that are interesting and relatable can be found throughout The City. Some are old, lonely folks who just want a bird-watching buddy, others are rebellious teens trying to bum cigs. Overall though, even this game’s “background” characters are a joy to talk to.

Backbone also features a cast of main characters that the player gets to know fairly well. These include Taxi-Dad Anatoly, tea-sipping Renee, and Clarissa Bloodworth. No way someone named “Bloodworth” is the game’s villain, right? These characters are, as you can imagine, more fleshed out and interesting. The player’s relationships with them prove to be complicated and consequential, and so we won’t be saying much more about them here. Just remember to be nice to Anatoly, the kids keep him up all night.

The game’s story itself is also something best kept under wraps. If you know much about the noir narrative formula, some things will feel predictable while others will definitely catch you off guard. The plot is well scoped to the world, starting small and getting bigger but not in a way that feels either disappointingly narrow nor exhaustingly epic. There’s more than one twist and characters develop in surprising ways, an impressive feat for 4 to 7 hours of gameplay.

Backbone does both, striking a balance between nostalgic and new, breathing another breath of life into the genre with its gritty, sad grin. This 2D, sidescrolling, pixel-art noir is a short but solid adventure mystery with stunning visuals and meaningful characters.