The latest news in the world of video games at Attack of the Fanboy
May 25th, 2021 by Kyle Hanson 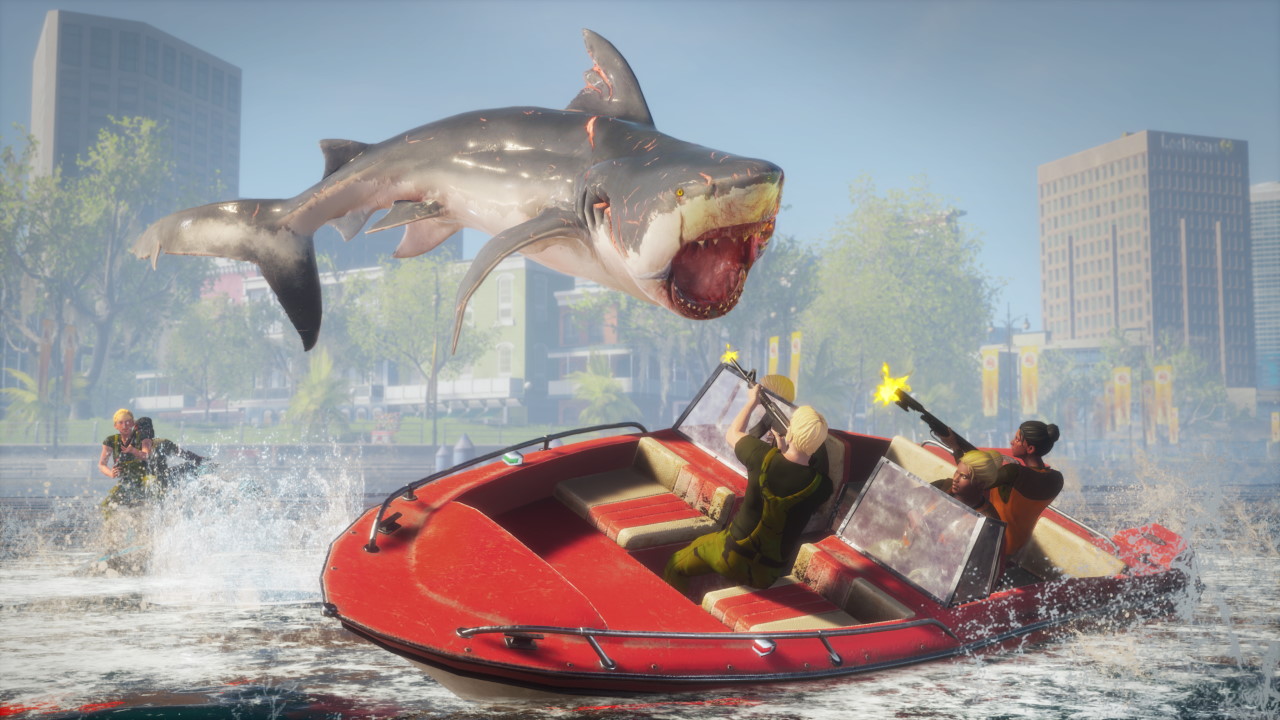 Like the cycles of the moon, gamers have become used to the release schedule that Maneater is about to follow. Released last year to fairly solid reviews, gamers pretty much expected a Switch port to arrive at some point. They might not have thought it would take a year, but with how popular Nintendo’s console is, releasing for it just makes sense if you have a game that will run on it. Of course, with an open world game set in water like Maneater, that wasn’t totally certain. Well, now that we’ve had some time with Maneater on Switch the answer is yes, it can handle the experience, but with some pretty significant tradeoffs.

Maneater won over a lot of fans through its style rather than its gameplay substance. Playing as a shark that’s set on a revenge quest against most humans, but one in particular, gamers enjoyed the unique nature of this action-RPG, or “shARkPG” as developer Tripwire Interactive and publisher Deep Silver have called it. Starting out as a bull shark who has just seen his mother killed by Scaly Pete, star of a Discovery Channel style documentary series, players will feed on smaller creatures, battle larger ones, and devour humans all on a quest to become powerful enough to exact revenge.

The RPG elements are light though, offering just a few varieties to choose from in terms of powers and abilities. You do grow much much stronger throughout the game though, offering a true sense of scale and power as you return to previous areas only to eat formerly difficult foes and mini-bosses as snacks. But that strength mostly just means instead of eating tiny turtles you can now take on seals and barracudas. While the scale does get larger the gameplay itself doesn’t really change all that much from the start of Maneater to its end about a dozen hours later. For more info on how the game plays as a whole you can see our original review for the PC version. 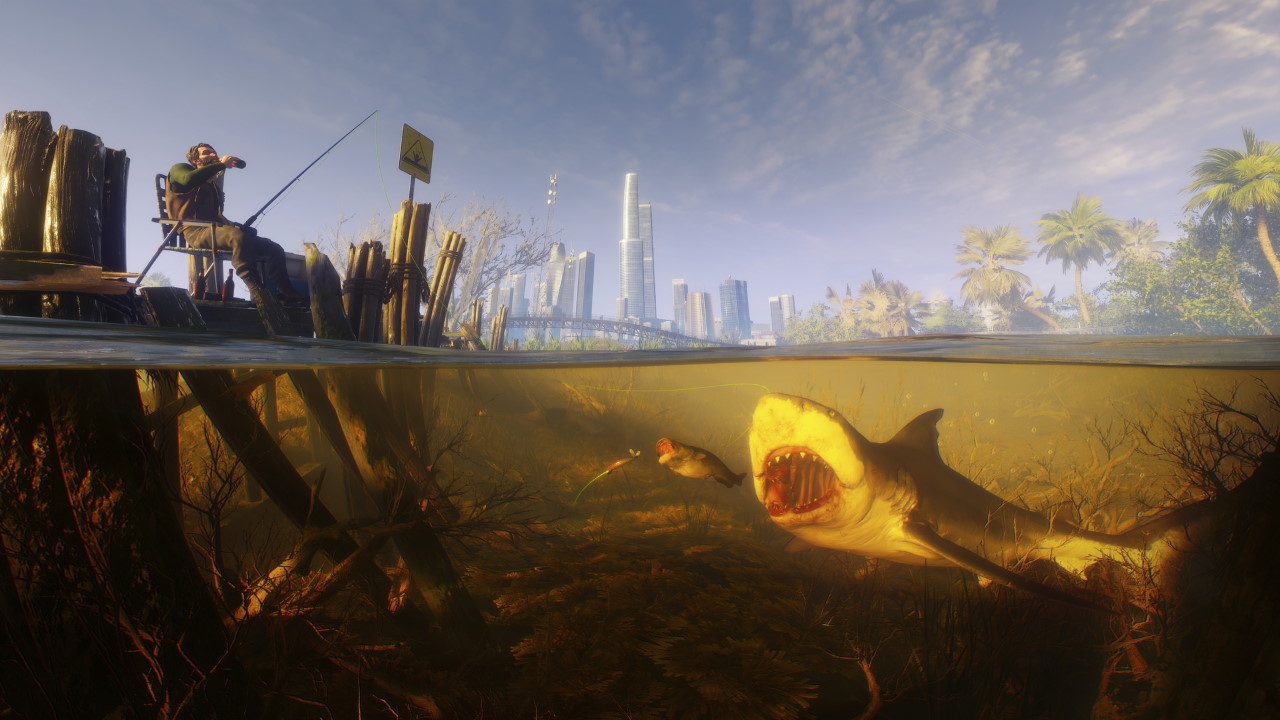 The gameplay of Maneater stays the same in its transition to the Nintendo Switch. And it brings its usual big benefit in that the game is now totally portable. However, as with other ports to the Switch you’re going to be making a technical tradeoff though. The game simply does not run as well on Switch as it did on any of its previous platforms. As an Unreal Engine 4 title, it ports over quite nicely. In fact, it’s pretty surprising how well it does run given how much can be going on at any time, with the 3D maneuvering space of the swamps and ocean of Louisiana, and all of the sea creatures swimming around in it.

The framerate stays fairly solid, with dips in all the expected places and times, but nothing too detrimental to the gameplay. However, draw distance has been shrunk down quite a bit, giving the game much more pop in of textures and world elements. The biggest drawback though is the resolution, with Maneater appearing extremely janky on a larger TV, and still not quite right in handheld mode. The visual drawbacks here are pretty extreme, making this a clearly inferior experience when compared to its other available platforms.

So when looking at Maneater on Switch players will find themselves in a pretty familiar place. There’s a solid game here, though one that fits a niche of early 2000’s action title that some players might not enjoy whether in 720p or full 4K. If that does interest you then you have a few questions to ask yourself if you’re debating picking up Maneater on Switch. Do you care about the visual presentation and overall stability of the game more than you care about it being portable, and how much is price a concern for you.

Launching a full year after hitting PS4, Xbox One, and PC the Switch version is releasing at the same $40 price point, making it a tough buy for anyone with access to those platforms or their recently released (but still mostly unavailable) successors. If you’re not dying to play Maneater on the go then buying it on there will be a better experience all around. The game will be cheaper, or possibly free if you already subscribe to Xbox Game Pass. It will also look and play better in every way. 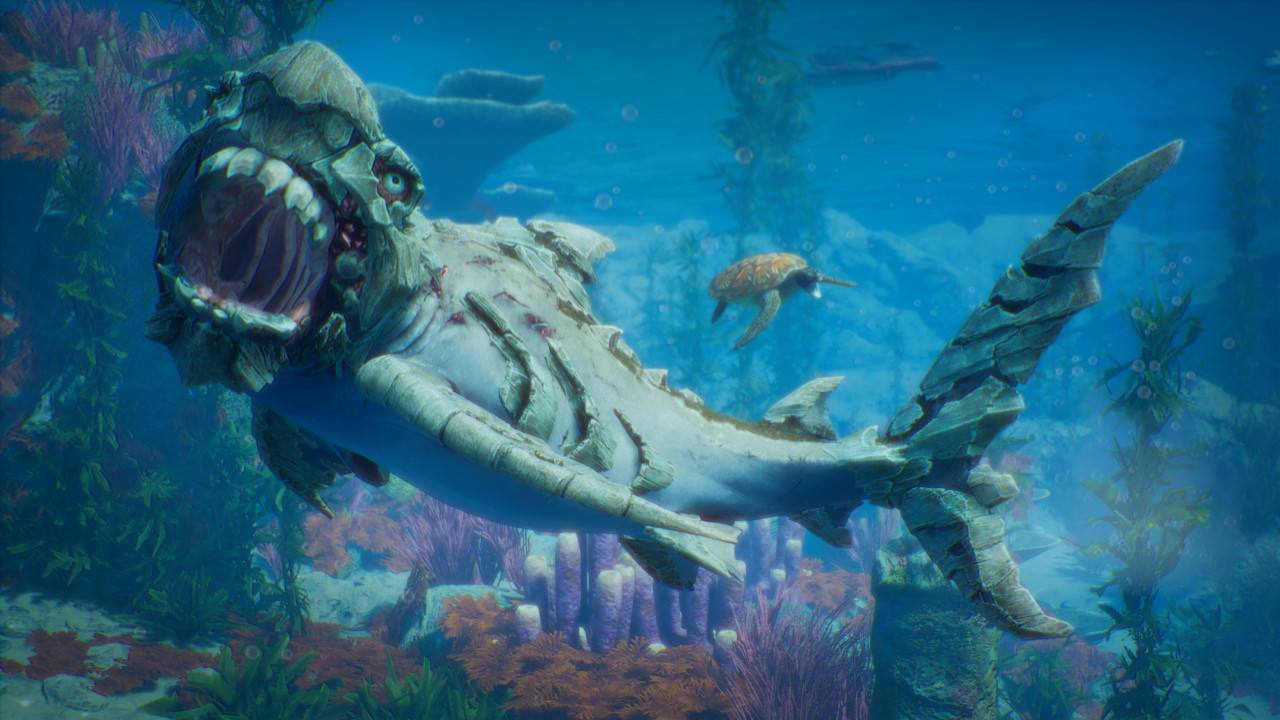 But not everyone owns a PlayStation, Xbox, or gaming PC of course. If you’re a Switch only player then the math makes a lot more sense. Maneater is a fun game, and is actually a fantastic fit for Nintendo’s handheld/console hybrid. It’s a shorter, more action focused game that, despite its open world setting, is mostly set up to be played in short chunks. Missions can be started and completed in 30 minutes or less, and the gameplay rarely enters long stretches where you can’t take a break. As a Switch title, Maneater works quite well and will please those who are seeking something that brings them back to the older days of action games.

But all of that comes at the cost of Maneater’s visual fidelity and overall stability. It runs admirably well on the small and often underpowered console, but that doesn’t make it worth the full price admission unless you have no other way to enjoy Tripwire’s latest action RPG. Unless you’re desperate for a new game to play on the go, the other platforms just offer a better experience all around and should be where you look first.

Maneater is a solid fit for the Nintendo Switch, but porting this ocean-faring adventure onto Nintendo’s handheld/console hybrid after a year of availability does take away a lot of the luster. The game wasn’t perfect on PS4, Xbox One, and PC but it was a surprisingly engaging action-RPG experience. A year later it’s still fun, but with those earlier releases still available at a cheaper price and in better condition they just make more sense for anyone who has a choice. However, if Switch is all you have then Maneater is worth a look if you’ve been yearning for a 2000’s style action game with some new upgrades.