Improvements year over year are minimal. 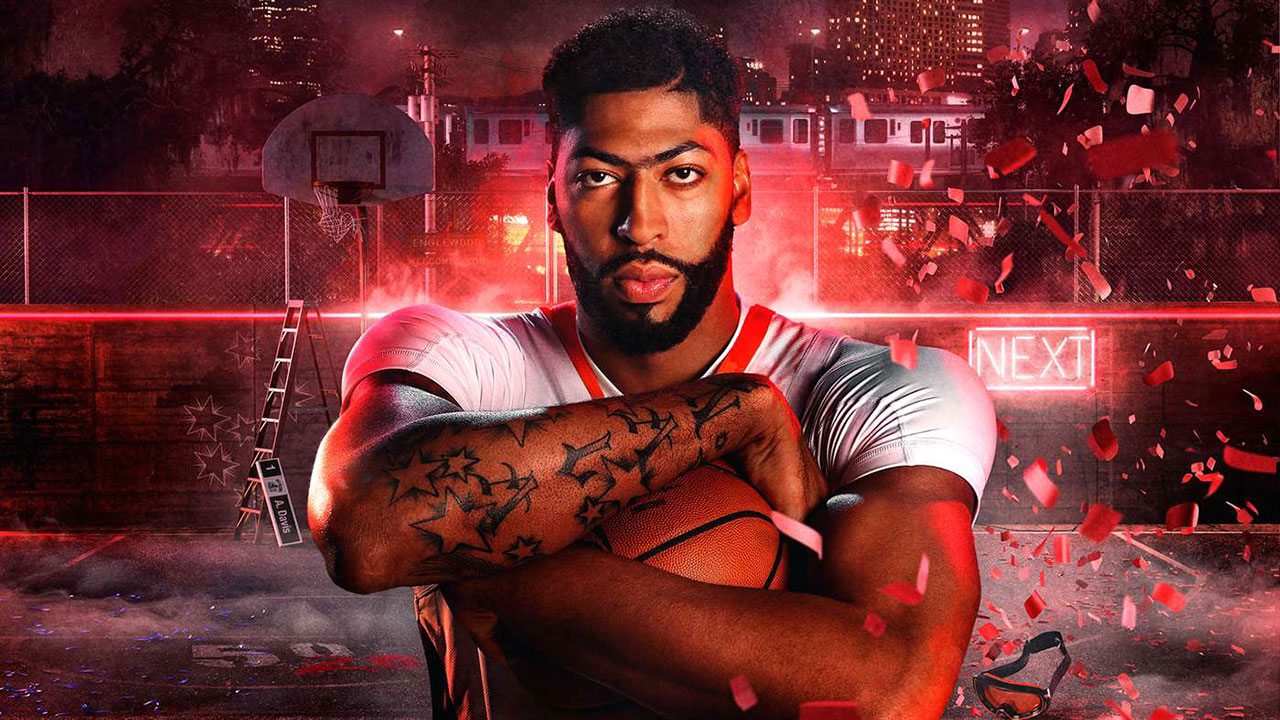 NBA 2K20 isn’t a standout year for the franchise.  When it comes to year over year features, it’s incredibly hard to see any big changes to the game.  Small refinements, perhaps, but it’s the same best-in-class visuals and gameplay when it comes to virtual hoops.  There have been some small tweaks to existing modes, the inclusion of the WNBA, and you can notice that there has been some improvements to the movement system and the way that players collide with one another, but it is most certainly very small tweaks when compared to the years where the annual sports franchise sees major overhauls or improvements.

NBA 2K20 is still the best place to play video game basketball.   This year, we don’t even have something that will launch alongside 2K for comparison’s sake as EA still only has a tentative release date for their troubled hoops franchise.  So all we really have to compare it is last year’s game, and it’s very similar.  While My Team players will get a brand new system with 2K20  and its evolution cards, it’s pretty much structured in the same way other than some very clear routes to high tier cards.  We’ll discuss that a little bit later though.  The other additions are something that many 2K players will likely never see.  I’m not sure how many NBA 2K fans have been clamoring for the inclusion of a WNBA mode, but that’s here if you were.  But modes like the My League and My Player are largely similar to 2K19. 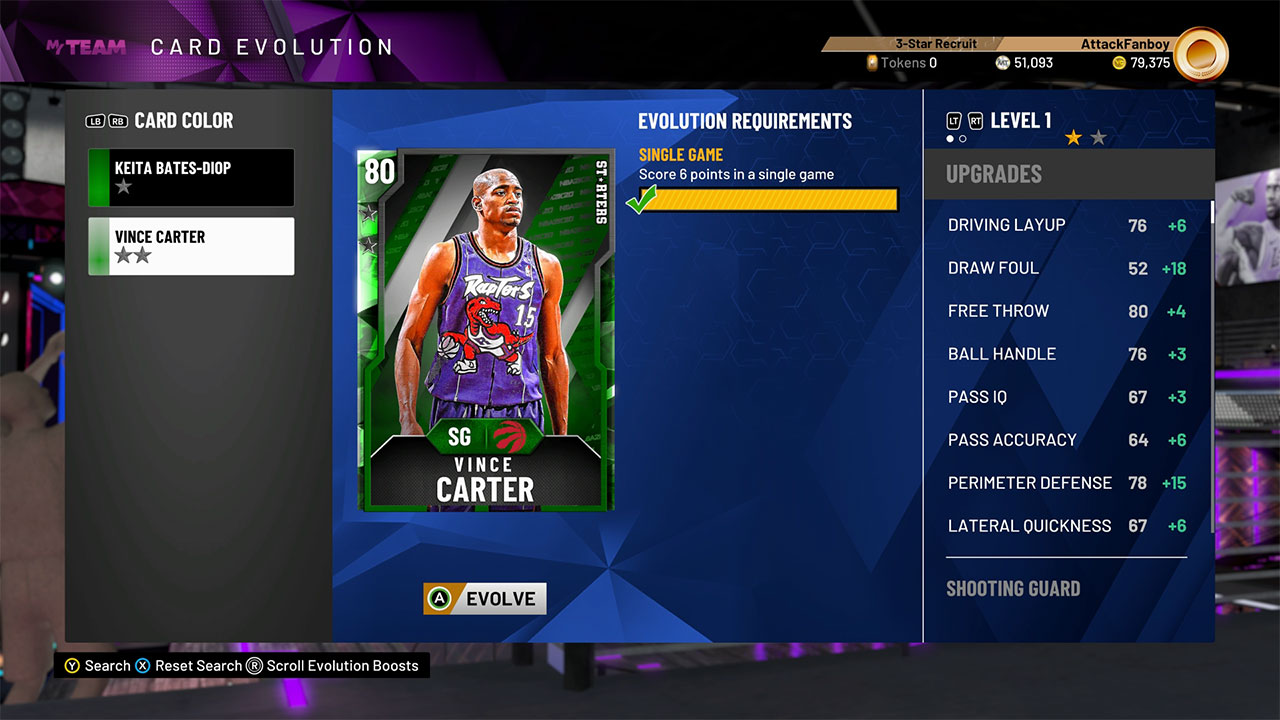 2K’s version of the Ultimate Team modes of other sports franchises, My Team is a card building game which has you earning multiple types of currency and earning card packs to build the ultimate team.  My Team in 2K20 is about what you expect from this mode which has been in the game for quite some time.  It is a mode that has you looking to build out the best possible team you can by purchasing and earning card packs.  In the mode you’ll unlock packs and currency by completing challenges and playing games to build out your team with the high rarity level cards.  There are plenty of ways to play in My Team if Ultimate Team modes are your thing.  Whether you want to build your team to tackle other online opponents or just complete single player challenges, there’s plenty to keep you busy.  The only real complaint about this mode is how slow it starts if you don’t have any Virtual Currency from either purchases, certain editions or pre-orders.  We tried to play this before we started using any of the currency that came with our version of the game and my assembled squad was a bunch of players that I hadn’t ever heard of.  Start throwing some VC or the earnable MT currency at this mode and things get more interesting.  While this is the point of assembling a good team, it feels a little bit slow at the start.

The mode is a little bit more transparent than it has been in previous iterations.  There are new evolution cards which allow you to evolve a card through completing challenges.  Doing so will improve the stats of the card.  There’s also a pretty clear road to the top tier cards, which are essentially locked behind Tokens, another form of currency in the game that is rewarded for completing different challenges across all the modes within My Team.  Since it is a card collector, you’ll earn these tokens in bunches simply by hitting certain milestones in terms of how many cards you have.  You’ll funnel these tokens into different level cards hoping to eventually get to the Galaxy cards at the top of chain. 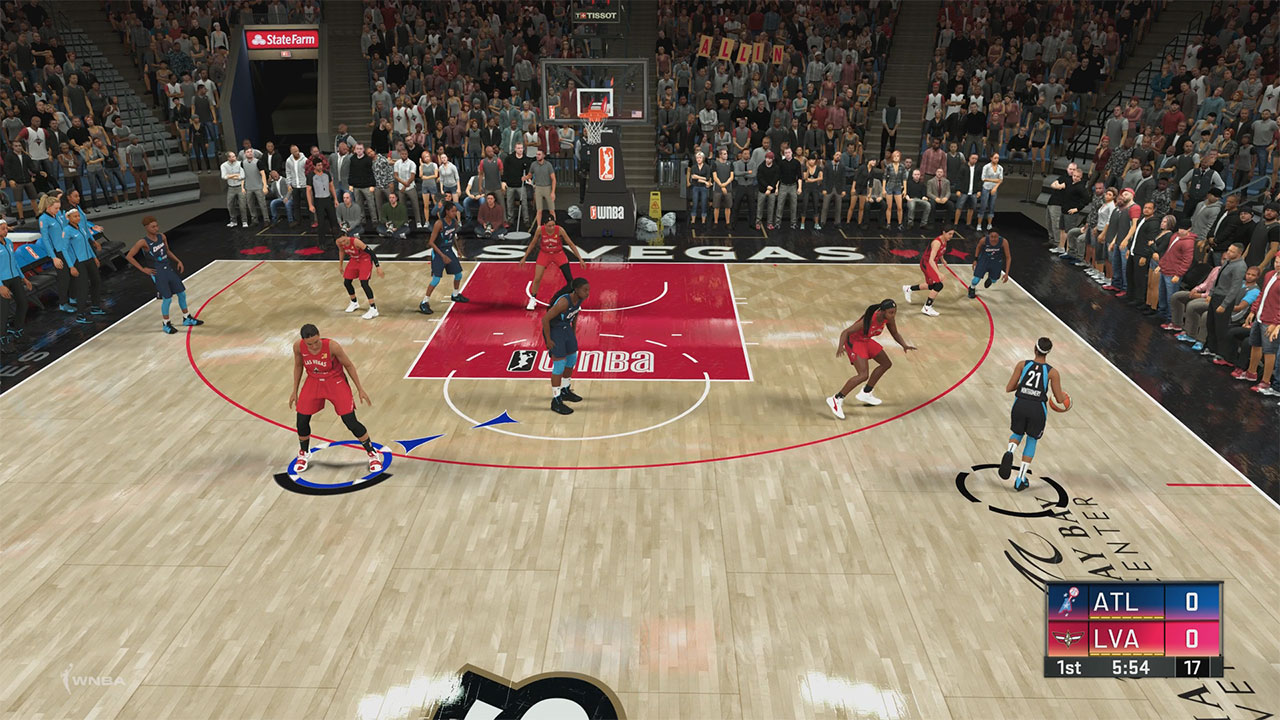 Adding the ability to play WNBA is an incredibly inclusionary move by 2K.  While the WNBA gets only a slice of the love when it comes to modes and ways to play, the actual on the floor gameplay is pretty good.  It’s at the level of the NBA stuff when it comes to player models, arenas, and all the sights and sounds from the on-the-court action.  Players can play in WNBA games in the Play Now section which allows you to play a quick game with any team.  You can also play a WNBA Season in My League.  WNBA doesn’t get the same amount of options that we see on the NBA side in My League.  While there may not be that many who were clamoring for the WNBA gameplay, there will be some who wished there was someway to play with their favorite players from the women’s league and this is a first for the 2K series.

Speaking of My League, if you played that last year it’s exactly the same as 2K19.  That’s not to say that this mode isn’t robust, giving you a pretty solid franchise experience with multiple modes to play, and plenty of options to control when it comes to the success of your franchise.  My League allows you to control almost every aspect of running an NBA franchise from both the coach/player level to the GM level.  In your standard My League you’ll handle things like scouting, signing, salary caps, trades, and more.  Of course, you’ll also handle all the playing in your standard My League as well.  There is a GM mode also, which is much different than the standard league.  In this mode you are handling GM duties and the goal is to get the highest score possible in a pre-determined time frame.  You’ll do things like handle tasks from the owners and coaches to hopefully improve the team. The GM mode could have some potential, but the unvoiced cutscenes in the mode are off-putting, but the tasks and team improvements are streamlined in a way that standard My League isn’t.  You’ll also get a chance to control the team that you’ve built in games during the seasons.  The only difference is you’ll also be spending action points to accomplish tasks in between them.  My League actually is a fairly robust mode for those are into multi-year franchises.  My League can also be played with other players online as well. 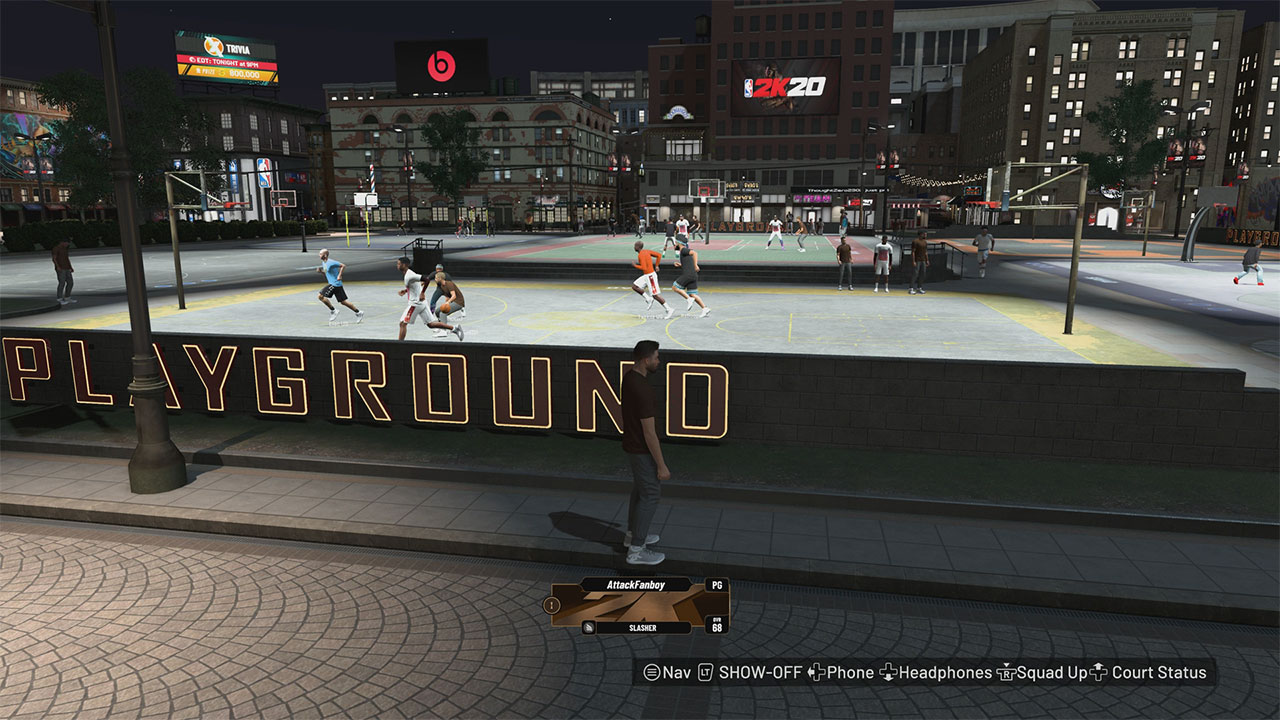 My least favorite mode in 2K20 has to be My Player.  It is such an incredible grind to make a decent player.  Every single step seems like it’s made harder than it should be, just to make you waste time so that you consider buying a litany of items for sale that make the process easier.  Whether that be boosters that allow you earn more quickly or through virtual currency that will let you upgrade your player right away.  Outside of the actual on-the-floor action in My Player, just about everything feels bad and clumsy. Whether that’s the abysmal training exercises, the horrible controls in disc-golf, or slow plodding pace at which you run around this virtual neighborhood once you’ve made it to the NBA.  Anything that can give you the currency for playing the game rather than purchasing it feels bad and uninteresting to interact with.

It also is very similar to My Career in NBA 2K19.  It’s got somewhat of a different story than other years, actually the story that you play through prior to making it to the NBA is probably one of the better ones we’ve seen in recent years.  It’s got some Hollywood talent attached to it with Edris Elba and Rosario Dawson as major characters.  It’s tolerable in a way that other stories haven’t been in recent years, but once you make it to the NBA that story is over and you proceed into your main goal being to win and build your player. This is when you’re let loose in the Neighborhood.  For players that just hop in with low level characters the road is long.  If you don’t have extra VC at the onset it’s going to take a lot of games just to get to a point where you can enjoy the many different things in this mode of the game like the Blacktop or any other mode where you’re playing against other players.  It often feels like you’re over matched by those willing to spend. 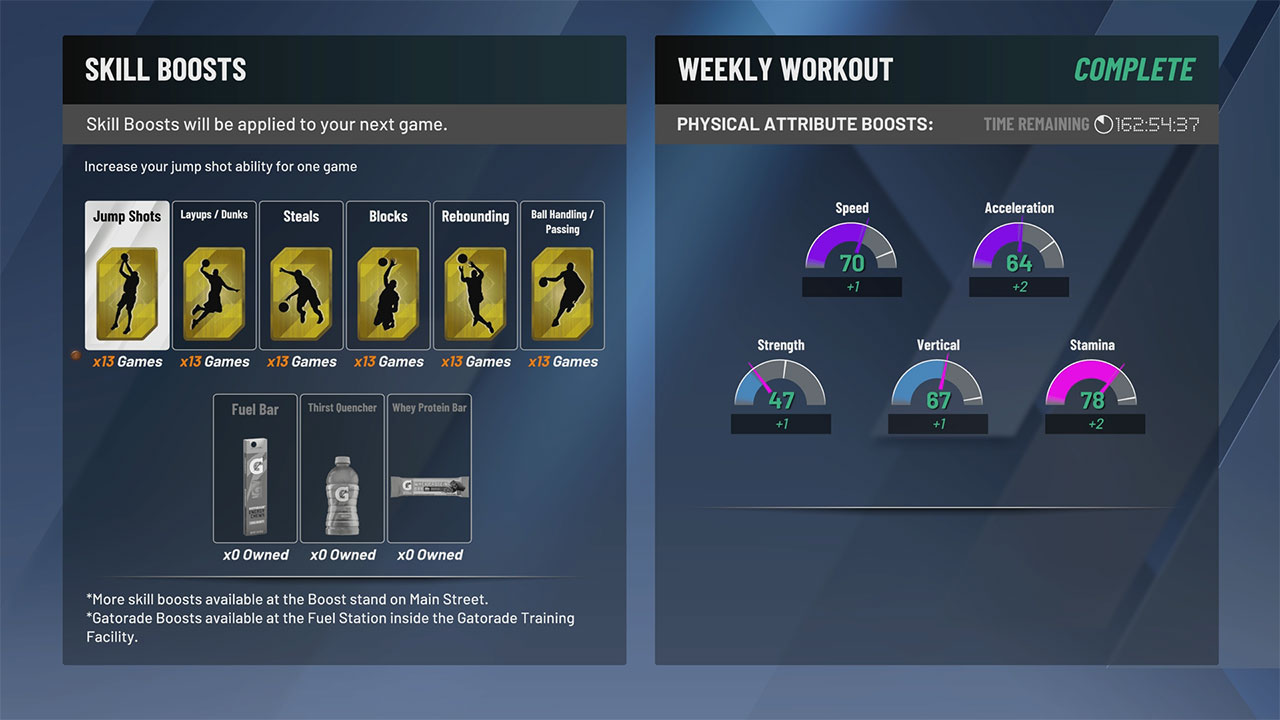 That’s not to say My Career isn’t an incredibly deep mode, because it is.  From the single player story that takes from the ncaa to the pros to many different activities that you’ll find once you make it to the league, My Career is a basketball RPG.  It allows you to build your character from scratch and pit them against real world competition on the blacktop, in wager matches, and other game modes within My Player, even if you never continue your journey in the NBA.

If you’re not into any of that and you just like to play your buddies online or on the couch, there’s still plenty of ways to do that.  You can team up with players much like you did in previous year’s games.  You can lobby up with friends and then head out onto team-up matches.  You can play in head to head on the same console or against others online.  You can play the aforementioned WNBA teams, or head out to the Black Top for some street ball action as well.  These core modes are still largely untouched by the microtransactions of the other core modes, so if this is your thing you’re still going to get the same feature set from 2K19 with the updated rosters and the ability to play the WNBA.

Still, despite the microtransaction-fueled nature of My Player it’s hard not to admire the sheer amount of stuff to do in NBA 2K20. That, and just how detailed and realistic the game is on the court. Casual NBA fans and hardcore 2K players have many different ways to play. That ranges from casual friendly matches to serious money tournaments that you’ll find in My Team if you’re good enough. With NBA 2K20 there’s once again ton of game modes to sink your teeth into, even if they all taste a bit like 2k19.