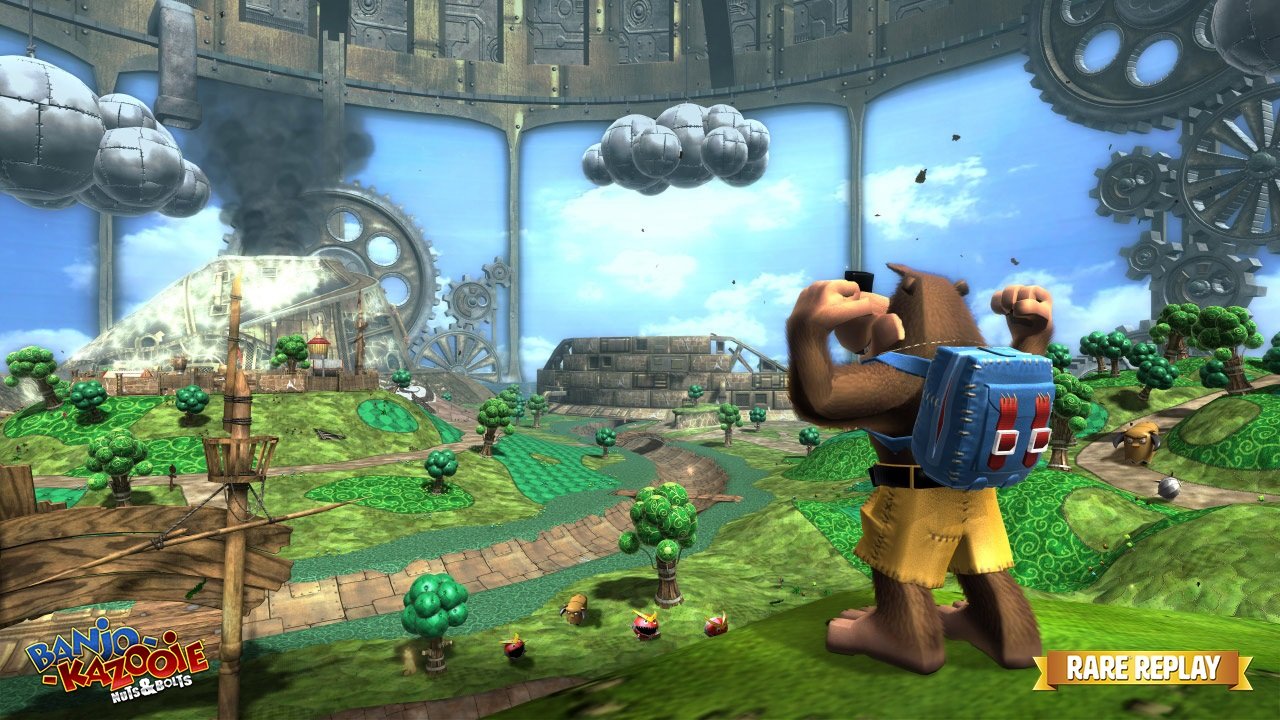 Announced at E3 2015, Rare Replay quickly became one of the most talked about games at the show. It all seemed too good to be true, honestly. 30 games from Rare’s backlog would be packaged together into this one single game, allowing players to dive into the much-loved developer’s backlog with abandon. Hugely popular series, such as Banjo-Kazooie, Perfect Dark, and Killer Instinct would all combine to form a gaming collection like no other. Rare Replay promised a lot to gamers, which usually sets the title up for massive disappointment when it fails to meet those expectations. Thankfully Rare Replay is a definite exception to this rule, giving fans a massive look at the history of one of gaming’s greatest developers.

From the first moment you boot up Rare Replay you understand what sort of experience you’re in for. The opening video takes you through a rush of Rare’s storied past, showing games that you’ve loved, alongside some that you might have missed. It reveals itself to be a true celebration of gaming itself along with Rare’s history, by presenting these games in such a fun and enjoyable fashion.

Once you actually dive into the game proper this revelation only sinks in further, showing that Rare Replay is a true piece of gaming history. Giving you 30 games stretching back the same number of years, Rare Replay is easily one of the most massive gaming collections you can find. The fact that most of these games are actually very good only cements its place as one of the best gaming collections ever released. 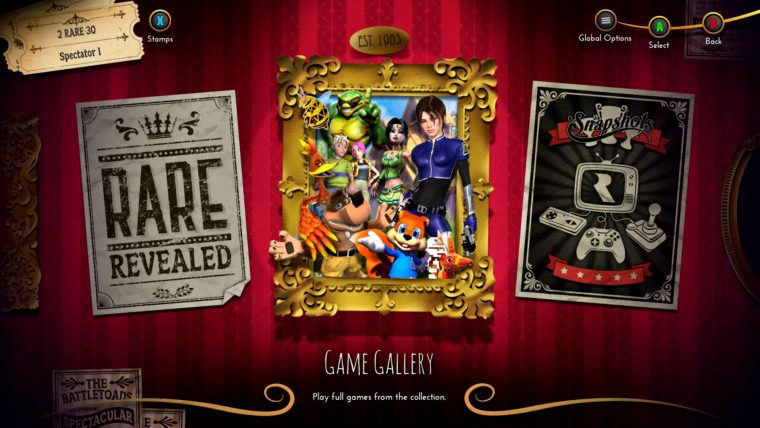 In Rare Replay you get such greats as Banjo-Kazooie, Blast Corps, Jet Force Gemini, Conker’s Bad Fur Day, Battletoads, and Viva Pinata. Along with these come smaller titles from Rare’s past, some of which might have been missed by the player the first time around. Games like R.C. Pro-Am, Snake Rattle N Roll, Cobra Triangle, and even their very first game, Jetpac. These older games feature that fun and highly difficult gameplay that most modern games are lacking. If that difficulty gets to be too much there are optional “cheats” which can be toggled on or off in the main game to make the experience easier. Things like “Rewind” which allows you to manipulate time Prince of Persia-style. The only problem is that not all games feature these great new additions.

Looking at the collection of 30 games as a whole you can see the developer’s history laid bare. From their pre-NES roots all the way up to Xbox 360, there are certainly peaks and valleys to the caliber of the individual titles. Games like Grabbed by the Ghoulies and Kameo might indicate a dip in quality for later games, but then you get to a modern classic like Viva Pinata and understand that while Rare might have changed through the years, they still understand how to make a compelling gaming experience.

Just playing through the base games, even making exceptions for those that might not hold up as well under modern scrutiny, you have a gaming experience that will last you hundreds of hours. Completing the single player portions of such classics as Banjo-Kazooie, Banjo-Tooie, Conker, Perfect Dark, Blast-Corps, R.C. Pro-Am, and the rest will surely take more time than you’ve devoted to almost any game before.

This is just the base game though, and Rare Replay contains so much more than that. Snapshots are a neat new feature that has been added, which extends the life of even the least enjoyable game in the collection. These small snippets of gameplay focus in on one section of whatever game it was made for. They are meant as a challenge, one which will eat up even more of your time thanks to the leaderboards showing off how good or bad you are. 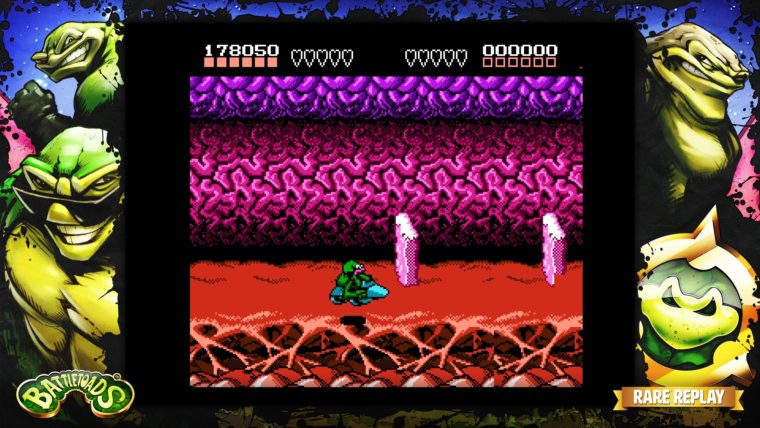 These Snapshots include things like beating a level in a given time limit, defeating certain bosses with modified rules, and, of course, the infinite Battletoads tunnel that sparked an E3 rivalry. Snapshots are a perfect way to dive into a game that you might not really enjoy, giving it some extra flair that enhances the experience. Snapshots can be accessed via the regular game menu, or through Playlists, which arrange them into themed packages. These add even more gameplay to an already ridiculously robust set.

Rare Replay is, simply put, one of the best collections in gaming history

The later entries in Rare Replay, essentially Killer Instinct and anything on N64 or later, don’t have Snapshots at all, These games are simply presented as-is, with some even forgoing the save states that the older titles offer. To save your progress in later entries, such as Viva Pinata and Perfect Dark Zero, you’ll rely on the actual in-game save system of that title. This save inconsistency doesn’t really come up while playing through Rare Replay however, so it’s not a major concern. The lack of Snapshots is a bit unfortunate though as these titles could have featured some of the best.

The older games also have another difference that requires mentioning. Many of these games were already re-released on the Xbox 360, whose version is featured here. Instead of being a part of the Rare Replay set, these games are simply backwards compatible versions that are installed to your Xbox One. You can still launch them via Rare Replay, and your progress is tracked, but they stand out among the tightly cohesive set.

Launching into them even loads a bare-bones version of the Xbox 360 UI, creating a slightly jarring experience that could confuse some. One benefit of this setup though is that you can load up these games directly from the Xbox One menu, without having to dig through the Rare Replay interface to get to them. If the Xbox 360 games are your main draw, and where you spend most of your time with Rare Replay, then this is actually a benefit, rather than a fault. 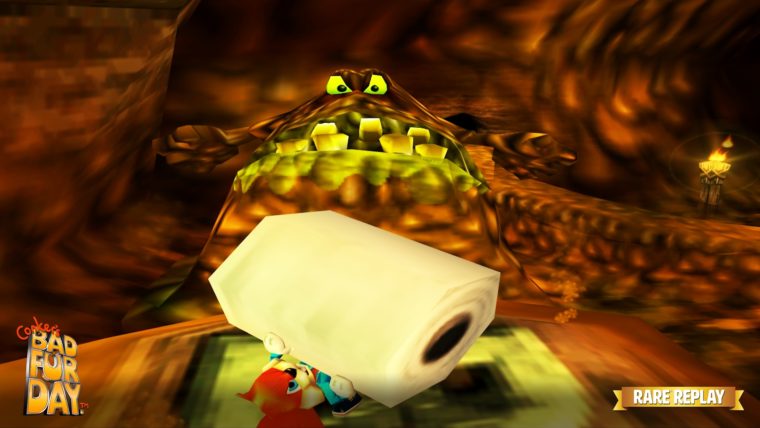 Aside from these extremely minor gripes, Rare Replay continues to excel in almost every arena. Achievements were a big selling point of the collection, with this being the largest amount of Gamerscore available in any single game at 10,000. Along with these come Stamps, which unlock at various milestones within the available games. Collecting more of them will level up your overall rank within Rare Replay. For those that try to perfect every game in their library, Rare Replay will certainly occupy a good portion of their life. Thankfully these items aren’t locked away too far, with the first hour of play in Rare Replay serving up more Achievement points than most gamers will unlock in entire other games.

Playing through the games and unlocking Achievements and Stamps will also make available a set of behind-the-scenes videos, offering players a look at the history of Rare and the games offered in this set. Smaller things add more enjoyment to Rare Replay as well, such as the optional borders around the 4:3 games, giving you a colorful widescreen presentation. Older games also feature an optional filter that makes them appear as though they are being played on a CRT TV. Another fun addition were the transitional loading screens, and the menu interface, all creating a feeling of a massive carnival/museum/theater like experience for the player. It’s these small additions, changes, and options that truly take Rare Replay to the next level in terms of presentation.

Rare Replay is, simply put, one of the best collections in gaming history. 30 games are available here, many of which are classics of their day. Throughout the set you’ll struggle to find a game that doesn’t offer some semblance of fun and interesting gameplay, and even if you do, you can load up the Snapshots for a more unique spin on the game’s core mechanics. Hours upon hours of gameplay await players, and with classics like Banjo, Conker, and Perfect Dark those hours won’t be wasted.