“We’re all connected in this love” 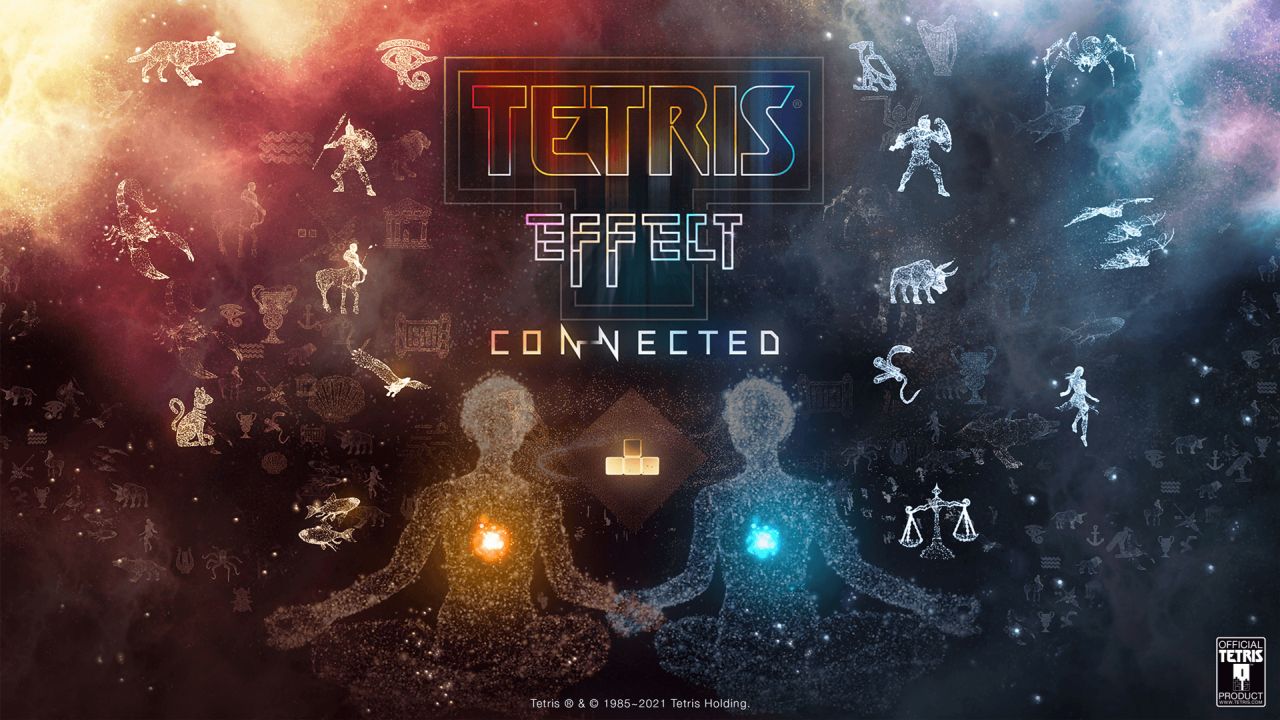 The vanilla version of Tetris Effect has been out for some time and has since then gathered some digital dust in our game libraries. Just last year, it received the massive Connected update which gave the game an entire multiplayer mode. That update was a Microsoft Store exclusive for a bit under a year until it was brought over to PlayStation consoles and PC platforms recently.

Tetris Effect: Connected is perhaps the best Tetris game out there right now. There are other games out there like the Puyo Puyo Tetris games, Tetris 99 on the Nintendo Switch, and the free-to-play browser game Tetr.io that are phenomenal in their own right. They are solid Tetris experiences to say the least, but Tetris Effect: Connected goes beyond what the others do.

This game is a complete package, sporting an abundance of single player modes to master and get better scores for. It also has its recently released Connected Mode which has a variety of head-to-head modes to pick as well as a very interesting co-op mode. 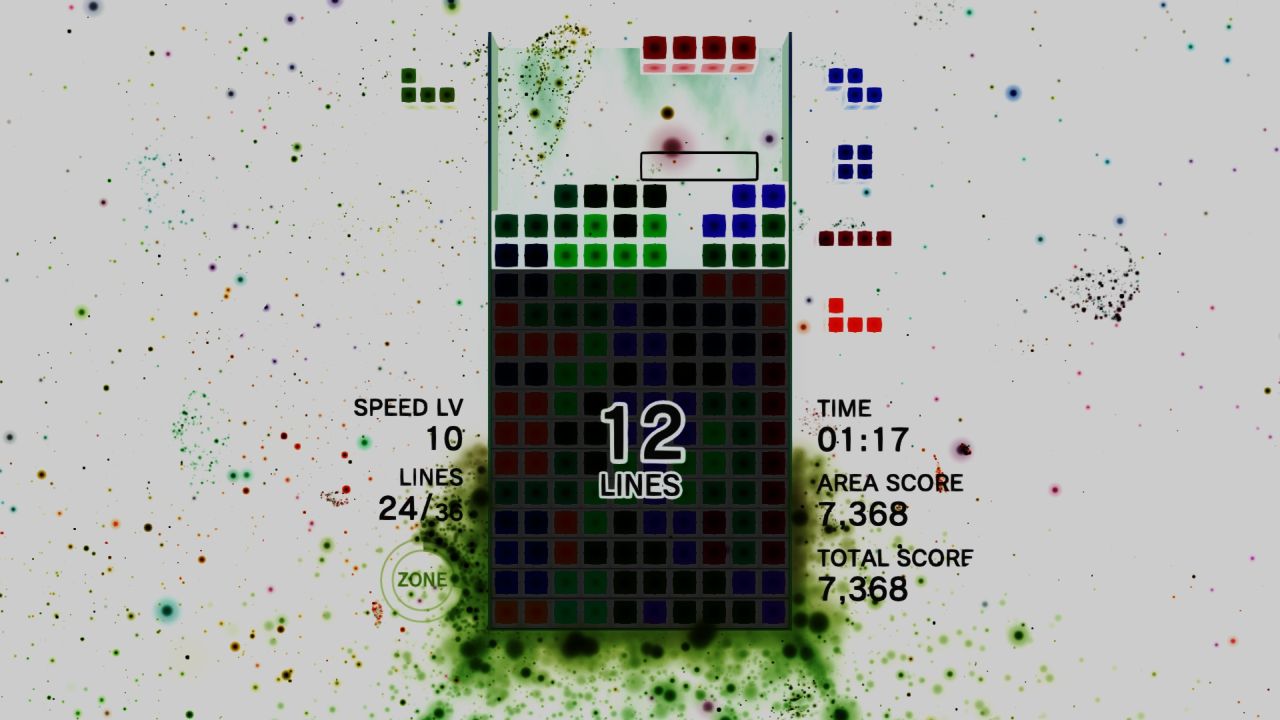 Tetris Effect as a single player experience is one that is almost like no other. Three years later, it’s still one of the most auditory and visually stunning experiences in gaming, especially for a puzzle game. It’s a game that I like to refer to as Tetris with RTX on, the bitrate killer, or the Windows screensaver turned up to 11. The lighting and particle effects are jaw dropping, beautiful, and sometimes (admittedly) distracting. But that does not take away from such an amazing experience.

Its visuals mixed with the music and sounds pair smoothly like peanut butter does with jelly. There are so many different boards all with their own visual and musical themes. Every level is such an ASMR inducing trip. Please, if you do plan to play this game, I implore you to play it with high-quality speakers, surround sound headphones, and a monitor with high image quality.

One of the single player modes consists of a short, but sweet campaign called Journey Mode. You’ll play through different stages of Tetris, clearing a certain number of lines to go onto the next stage. Tetris Effect introduced its unique “zone” mechanic where the player can essentially stop time to create line clears larger than a 4-line (aka a Tetris). The highest possible line clear setup on record was a 24-line ‘impossibilitris’.

Tetris Effect as a single player experience is one that is almost like no other. Three years later, it’s still one of the most auditory and visually stunning experiences in gaming, especially for a puzzle game.

Other than that, there is a selection of 15 different Effect modes, consisting of some Tetris classics like the 150-Line clear Marathon mode, the 3-minute Ultra mode, and the 40-Line clear Sprint mode. Other modes include a relaxing, ambient classic playlists, specific gimmick modes where you have to perform all-clears, high combos, and clearing target blocks.

Then there are even wackier modes like the Countdown mode that has players playing normal Tetris, but with random I-pieces falling onto the board. There is also the bitrate killing mode that is the Purify mode where players have to clear dark blocks in a set amount of time, and finally the Mystery mode, a game type where players will endure all kinds of crazy modifiers like a flipped board, exploding pieces, invisible boards, or giant tetriminos.

The single player experience for Tetris Effect is plentiful, especially for a game that has been getting quite a lot of price cuts since then. Its new addition, the Connected multiplayer expansion, is the icing on the cake; it’s what creates the definitive Tetris experience to date. The multiplayer in Tetris Effect: Connected is much more than a 1-on-1 mode where two players face off, clearing lines and sending garbage to each other like in other games. There are four multiplayer modes to choose from: the Connected co-op mode, Zone Battle, Score Attack, and Classic Score Attack.

It’d be a disservice to say which mode is the most unique, because they all have their specific appeals to players of different facets of the franchise.

The Connected cooperative mode has three players team up against a series of bosses that ramp up in difficulty. In my rundown of the Connected mode, I referred to this ‘as like a raid boss mode, but with Tetris’. The three players have to clear lines to fill up a shared meter at the bottom of their playing fields. However, these bosses fight back against players using a series of different board difficulty modifiers like adding in random tetriminos, making the boards invisible, jumbling up the pieces on players’ boards, and many more. When the meter fills up for the players, their boards all converge into one giant Tetris board, where they then have to clear as many lines as one unit. The more lines cleared, the bigger the attack will be against the boss. The attacks raise up the playing field for the boss, making them more susceptible to topping out.

The next mode is the standard Zone Battle mode. It’s the typical modern Tetris mode where two people face off, clearing lines and sending garbage to each other, in hopes that their opponent tops out first. However, this mode brings in the Zone mechanic from the single player mode, which can heavily turn the tide in a match.

Then there’s the Score Attack mode, which is like Zone Battle but without the garbage or zone. It lives up to its name as just two players facing off in a race to see who comes out with the higher score. Once a player tops out, their opponent has to chase down their score within two minutes. Unless the person who tops out had a lower score, their opponent automatically wins. 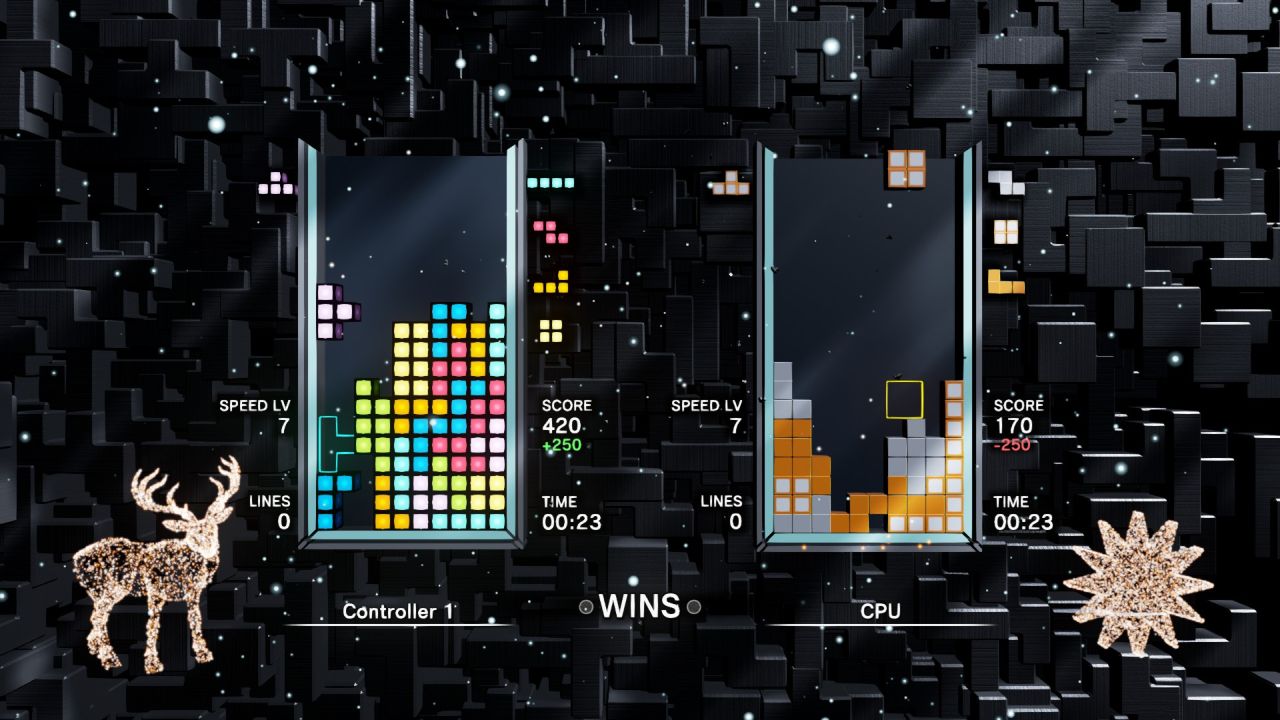 Lastly, there’s the Classic Score Attack mode which pays homage to the 1989 Classic Tetris. This mode is unique in the sense that its mechanics are nothing like the rest of Tetris Effect: Connected. This is the mode that fans of the game will populate, with their DAS and hyper tapping techniques to really strengthen the competition. It’s not exactly a 1 for 1 like the game that has grown to viral levels of popularity from the CTWC, but it’s a damn good recreation of it.

What makes this game stand out the most from having so many modes to choose from is the fact that it’s also received full crossplay functionality. The game is out on current PlayStation and Xbox consoles as well as PC. This means that someone on the PlayStation 4 or 5 can play with people on the Xbox One or Series consoles and even PC.

When this game comes out for the Nintendo Switch on October 8, 2021, players on the current existing platforms will also be able to match up with Switch players. This is such a monumental and important feature for a multiplatform to have nowadays. It creates an even bigger incentive for people to play with their friends, regardless of platform. This will also help lessen matchmaking times and keep the player base much more active.

Tetris Effect: Connected is the definitive Tetris experience to this day. It boasts a plethora of single player and multiplayer modes. There’s something for everyone when it comes to this game. From the music and visuals to the competitive potential in its multiplayer modes, this game has it all from the classic puzzler in a beautiful coat of paint. Its addition of crossplay will make it even more enjoyable among friends and tournament organizers, allowing for its already humble community to flourish even further.