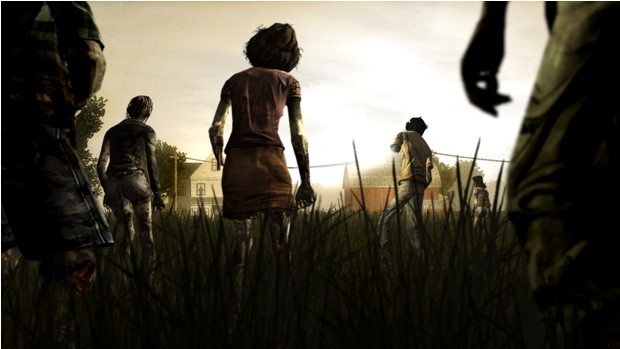 Rarely do the words ‘narrative’ and ‘zombies’ get thrown together in the same sentence, unless it’s “They shouldn’t have bothered putting some crappy narrative in a game about zombies. I just wanna blow them Walkers’ limbs off!” Okay, that was actually two sentences… two fairly stupid sentences, but you get the point. If you have ever heard of The Walking Dead, however, then you know that the term character-driven-zombie-story actually makes some amount of sense. Yes, The Walking Dead is a video game adaptation of Robert Kirkman’s comic book series of the same name; it is not directly related to the show on AMC other than the fact that they are based on the same ‘universe’ and have an overall similar vibe, but that opinion may vary from person to person.

First thing’s first, it’s a little hard to qualify this as a game. It has many, many gameplay elements and has an interface akin to video games, but in actuality it feels more like an interactive story than anything else. Almost in the same way that Dear Esther isn’t much of an actual “game,” however Dear Esther’s story remains the same regardless of what the player does. In the case of The Walking Dead, you actually have a say in how the story unfolds. Some of the choices you make are based on basic A, B, C options like “save person X or person Y,” but most of the time the changed come from what you say in conversations with other characters. These conversations will determine your overall relationship with the character you are interacting with and actually has a somewhat noticeable impact on the direction of the story. Since only the first episode of the five part series has been released, many of the decisions you have made haven’t really panned out yet. However, what you see unfold towards the end of the episode and what you see happen in the “Next time on the Walking Dead” video before the credits shows obvious repercussions for your actions.

In the case of The Walking Dead, you actually have a say in how the story unfolds.

There is a noticeable distinction between which characters you are theoretically supposed to like and those you aren’t and the reason for this is, most of the time, the writing is not all that bad really. It’s nice to be able to say that about a video game these days since we have a tendency to see the same quality of writing of the same various stories over and over and over again, year after year. Does the writing deserve to get some prestigious award? Probably not, but that’s only because of the constant narration of the main character’s inner thoughts. Every now and then, the main protagonist, Lee, will say something like “I need to climb out that window” or “That’s the door to the pharmacy” when the game has already classified what that door is and where it goes. Basically, it’s a way of letting the player know what they need to do without having the game throw a hint on the screen every five minutes. Unfortunately, it’s painfully obvious that that’s exactly what these lines of dialogue are. The writers don’t even try to make it subtle by making these particular lines sound more natural. Even Halo 3: ODST did a fairly decent job of using that little technique.

It’s surprising that those tasked with writing the script for a game based on a series very well known for its story and writing would overlook something so obvious. It is quite a contradiction to the overall quality of the writing and can pull you out of the immersion for a moment every now and then. Thankfully, these ‘tutorial’ lines are typically far and few between, so it doesn’t ruin the experience. The game having its fair share of bugs doesn’t totally help, though. There’s nothing game-breaking that I’ve experienced, mostly just minor annoyances. For instance, some of the cutscenes are a little jittery, and it’s not the framerate; it seems more like there’s weird skip when the camera changes angles. Also, it looks like dialogue choices associated with certain mini-quests in the game are still available when you are talking to a character that is associated with said quest, even though you actually already finished the quest. Whether this is a bug or just a design oversight is unclear, but it doesn’t have any real negative impact on the game. One bug that is particularly annoying is sometimes if you have to restart from a checkpoint, the camera spawns UNDERGROUND. It’s quite disorienting and it’s surprising that an update hasn’t addressed this yet, but the fact that this game is multiplatform might be contributing to delay of updates (thanks Microsoft, Sony).

This particular genre rarely intrigues me, mostly because it’s very ‘on-rails.’ That being said, this game is very well done. It has its downsides, as I’ve listed above, but it has well designed characters, an interesting story, and successfully makes the player feel involved. Often, when I watch AMC’s adaptation of The Walking Dead, I feel very frustrated with many of the characters. In this case, you take control of the main character and help drive the story in a way that you feel comfortable with. Instead of watching a tv show where you have gotten sick of a character’s attitude and no one is shutting him up, here there is most likely an option to punch him in the face if you so choose. The episodes only last around two hours, so don’t expect to have a whole lot happen if you get the game before the second episode comes out. If you are someone who wants to avoid all of the combat sequences and get straight to the story, then The Walking Dead is an absolute must. If you just want to blow heads off, then this game isn’t for you. Sure, there are zombies and there’s gore, but any combat is very scripted; again, on-rails. Left 4 Dead 2 offers plenty of that and also happens to take place in the south, fancy that. It certainly is an acquired taste, but if you love this niche genre of gaming, you don’t need to worry too much about this game.