Werewolf: The Apocalypse – Heart of the Forest Review It’s been an interesting month for fans of the werewolf genre with the release of Werewolf: The Apocalypse – Earthblood and now the Playstation 4 and Xbox One release of Werewolf: The Apocalypse – Heart of the Forest. While Earthblood came out earlier this month, Heart of the Forest actually predates it, having been around on PC since October 2020 with a Switch version following in January 2021.

The initial roleplaying game upon which it is based, Werewolf: The Apocalypse follows the Garou – aka Werewolves – as they fight against both the supernatural force known as the Wyrm and urban civilisation itself. Much like Earthblood and Vampire: The Masquerade, Heart of the Forest is set within the World of Darkness – a world where all sorts of supernatural beings such as Werewolves and Vampires live in secret alongside humanity.

Werewolf: The Apocalypse – Heart of the forest focuses on the second form of conflict that the Garou face – that of urban civilisation. The forest is crying out and it’s the player’s job to answer that call. It’s obviously a work of fiction, but it is very much inspired by the real life anti-logging protests that took place in the Białowieża Forest  – the Puszcza – in 2016 and 2017. It follows the story of a young woman called Maia who, after experiencing some very strange dreams, decides to travel to Białowieża, Poland, to retrace her roots.

Due to her apparent connection to the Puszcza, Maia finds herself right in the middle of the conflict between loggers who seek to cut the forest down and the protesters who seek to save it. As she delves into this conflict and uncovers the secrets of the forest, she starts to unravel the mystery of her own heritage and her life becomes a whole lot more complicated.

The artwork for Heart of the Forest is truly unique as it incorporates a mixture of photography and hand drawing. It was an interesting choice which actually lends itself really well to a visual novel. Each scene had multiple layers of depths to it and I found myself noticing new things the longer I looked at them. Because of this, they were able to use real photographs of Białowieża which adds a sense of realism to a game with supernatural elements.

Heart of the Forest also uses music and sound effects extremely well too. From the serene sounds of the forest and the sound of logging to the animalistic growls and sound of flesh being torn apart, you really feel immersed, especially if you’re using headphones. 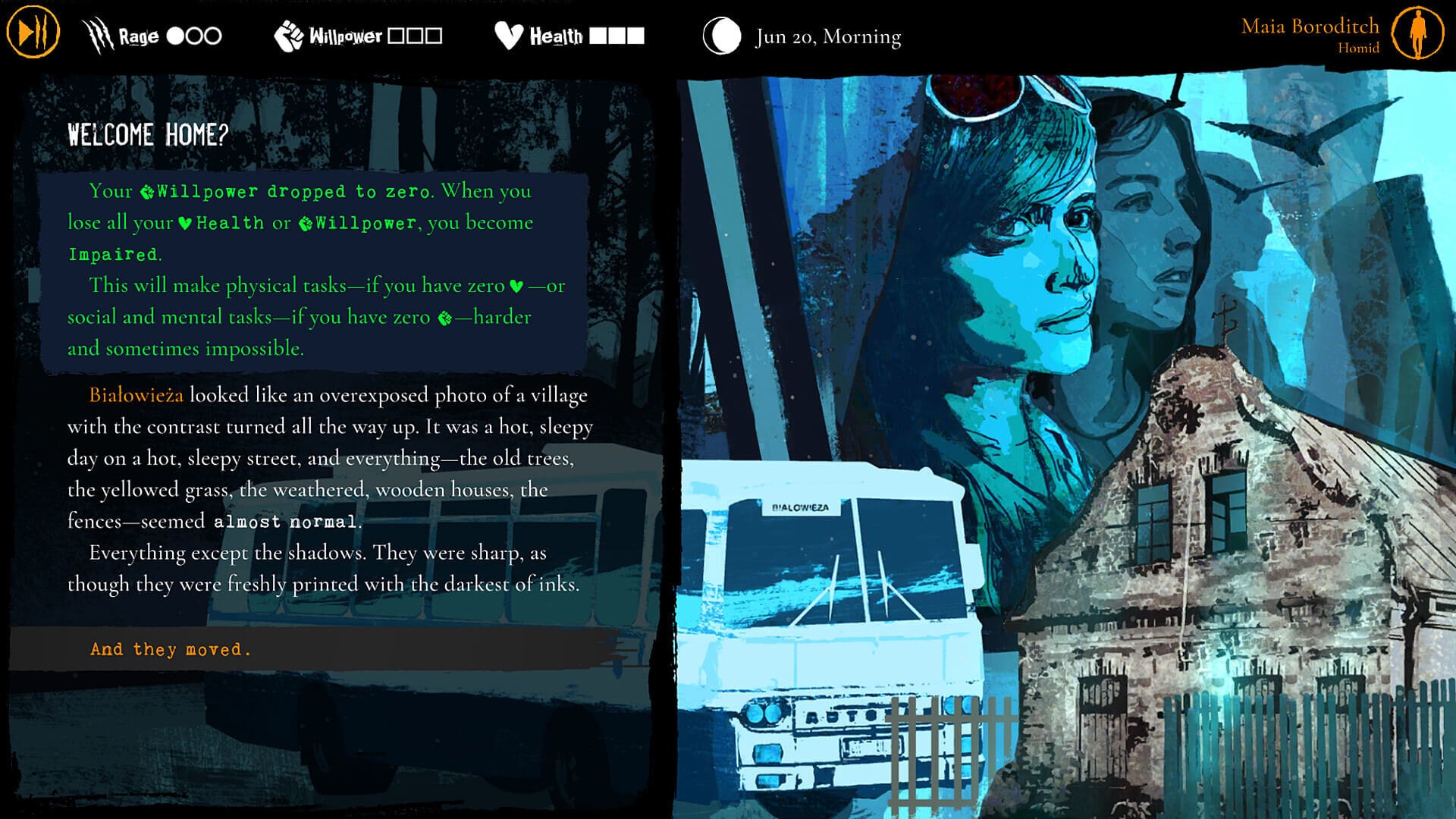 Heart of the forest is a visual novel but it remains true to the spirit of the original roleplaying game by incorporating rpg elements. Rather than simply picking and choosing from a set of options to push the game onwards, you also have to take into account things like rage, willpower and health. A higher rage level allows you to make bolder decisions, but more closed-minded whereas a lower level makes you more open-minded, but you’re much more afraid to act in certain situations.

You have to try and balance this level unless you want to go for an extreme approach in either of those directions. Certain choices will either increase or decrease these stats, so that’s also something you need to take into account throughout your playthrough. If your health or willpower reach zero, physical or mental tasks respectively become harder or even impossible. Thankfully, these things can be replenished by fulfilling certain goals. 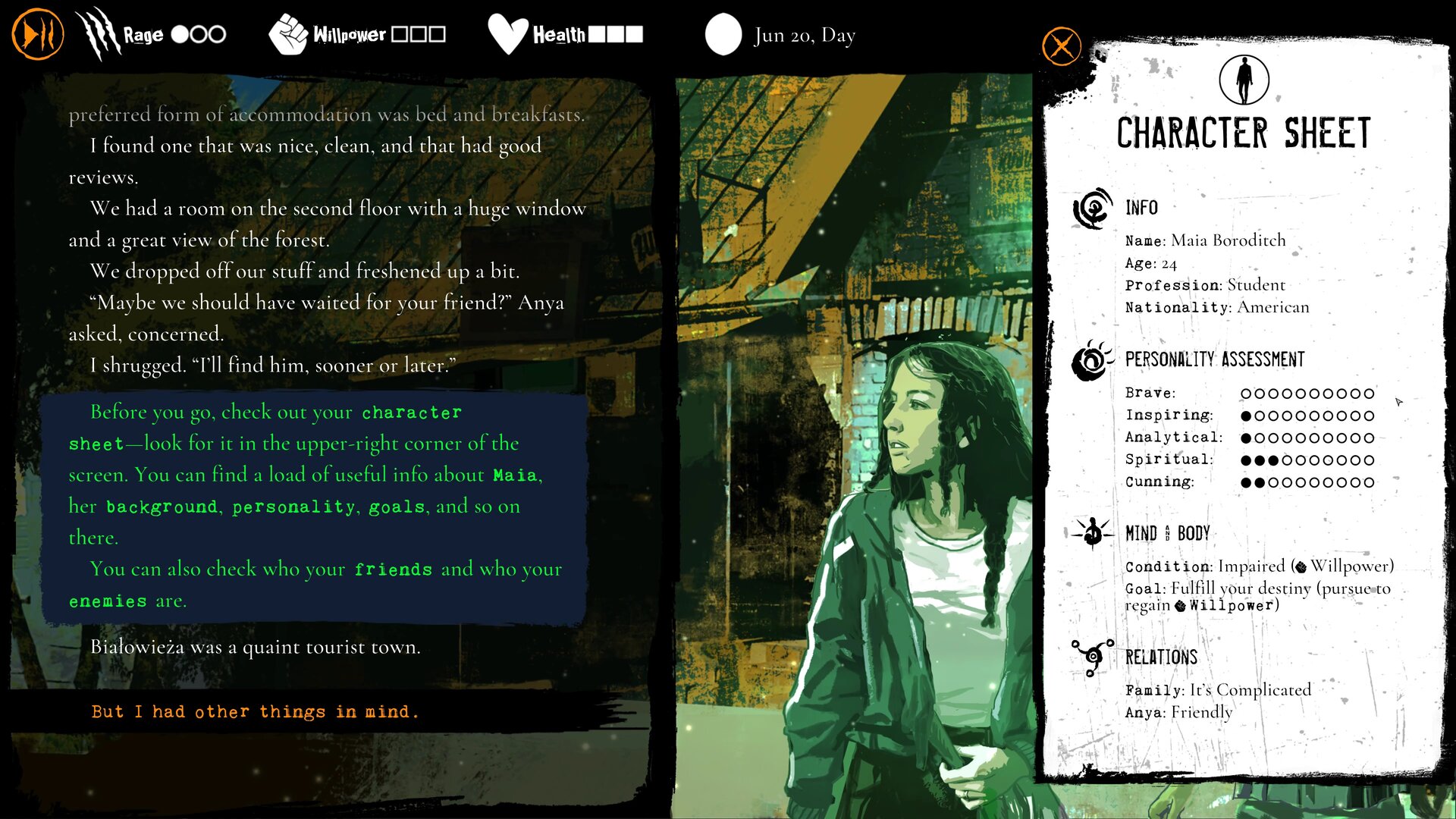 The inclusion of such roleplay mechanics added an extra layer of depth to the game, but there were times the choices seemed unnecessary. There was one point where all I had to do to regain health was select ‘I feel better’. This might make sense from a plot standpoint, but as a gameplay mechanism, it might have simply been better to just have it included in the text rather than an actual choice to input since there was no option for us to not feel better.

Heart of the Forest isn’t a particularly long game. Broken down into six chapters, it can be completed in around three to four hours but with multiple branches to the story and five main endings, there’s incentive to replay. The developers suggest that it could take around fifteen hours to complete the game fully so there’s quite a bit to sink your teeth into if you want to explore the multiple endings. 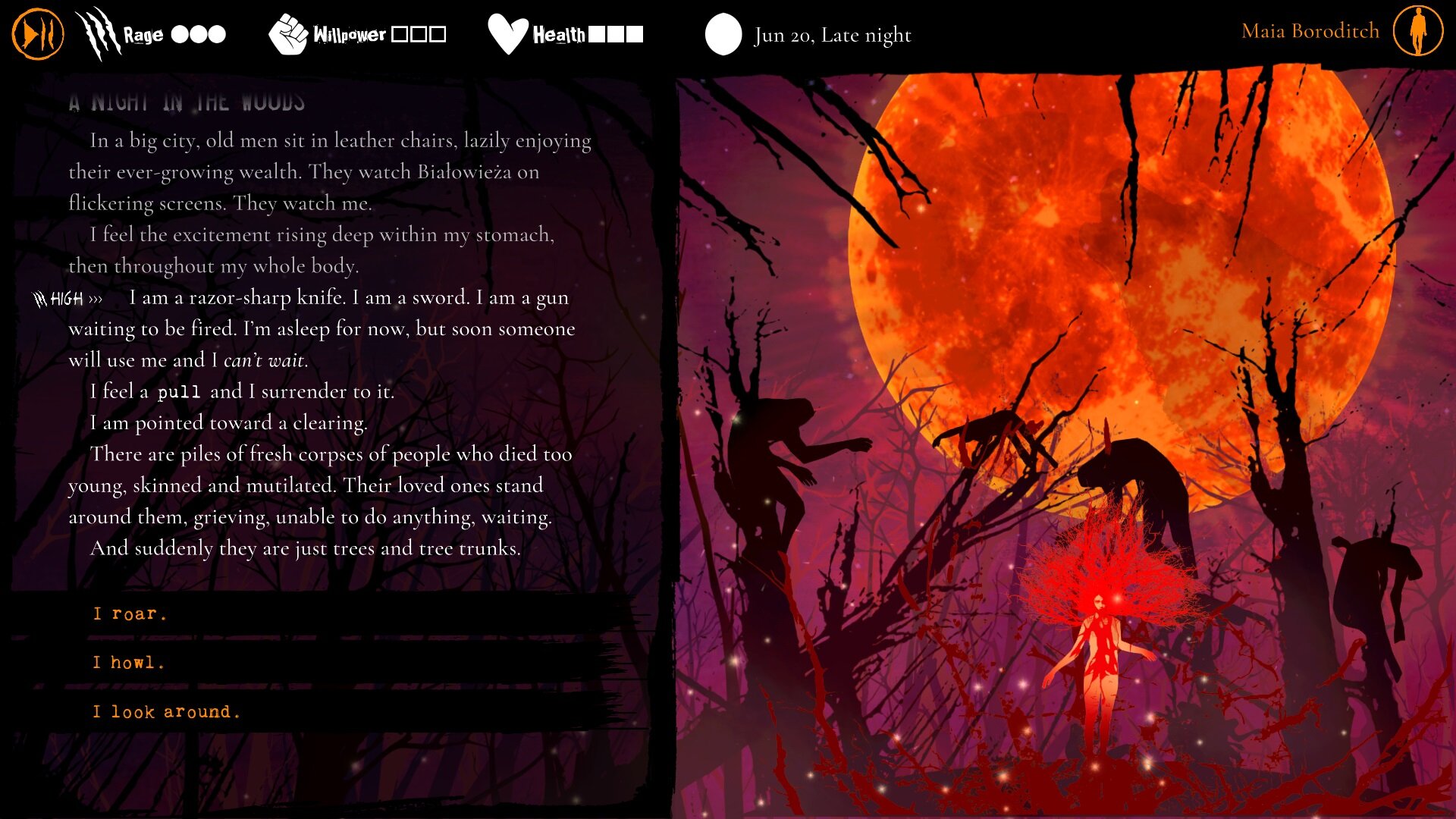 My favourite thing about Heart of the Forest was, without a doubt, all the werewolf lore. Now, that might sound pretty obvious – a game about werewolves is going to feature lore, after all – but it’s so rich. A lot of time and effort has been put into capturing the essence of the source material as faithfully as possible. Not only do you have the different werewolf forms ranging from the Homid (the human form) to Lupus ( the pure wolf form) and everything in between but you also have the significance of the moon on a werewolf’s character traits.

For example, Garou born beneath the full moon are classed as warriors and as such, have specific traits distinct to them. It’s just a shame that the majority of this lore isn’t really touched upon until towards the end of the game which makes it feel a little rushed. In a way, this makes sense as the game is just as much about Maia discovering herself as it is defending the forest, but it would have been nice to have seen more lore early on.

Despite feeling a little rushed at times, Werewolf: The Apocalypse – Heart of the Forest is a unique take on the werewolf genre that not only remains true to the spirit of the original roleplaying game, but also adds it’s own mark with its story of self discovery. With a unique art style, effective use of sound and plenty of lore, Heart of the Forest is well worth checking out if you’re a fan of visual novels and the werewolf genre itself. It’s just a shame there wasn’t more of it.

Werewolf: The Apocalypse – Heart of the Forest