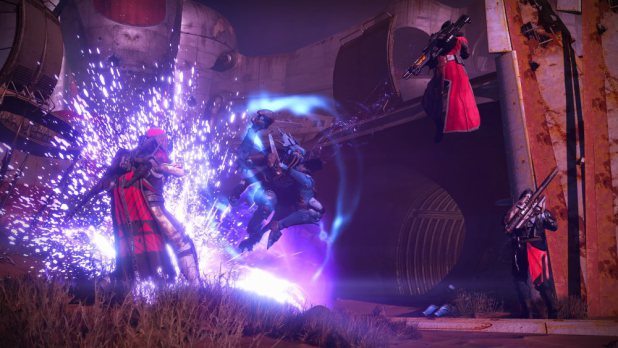 In a new video for Destiny House Of Wolves the developers over at Bungie go into detal regarding the upcoming second expansion for Destiny.

The video goes into the depths of Destiny Expansion II: House Of Wolves by having developers tell us more about the content over the video for four minutes. There will be five story missions within the Reef where players will be tasked to find and capture Skolas. New characters and new strikes are also included in the content.

The Crucible takes center stage with a few maps including The Widow’s Court which takes place on Earth in a European dead zone complete with crumbling cathedrals, Black Shield takes place on the moon of Mars and Thieves Den takes place on Venus inside an active volcano (that’s safe). There is also Timekeeper which is a PlayStation exclusive Crucible map, that is a relatively small map.

Prison Of Elders is a team and combat focused mode that  you will take on waves of enemies culminating in a boss fight. The matchmaking version will be randomized and also have random modifiers that can help or hinder your progression in the Prison Of Elders. Every few rounds something called ‘Critical Objective’ will appear and will offer additional challenge during the Prison Of Elders. There is also a more dificult Challenge Mode which lists a few for it that has a set of unique bosses. If everyone dies, you wipe.

Finally the Trials Of Osiris is a new Crucible area where powers are enabled and offers a new game mode. Elmination will see players basically kill eachother in short two-minute rounds in a 3v3 environment. When you are killed, you stay down until you a revived or a new round starts. Check out all the content below in the video including a look at the PlayStation exclusive crucible map.

Destiny House Of Wolves is set to launch for Xbox One, PlayStation 4, Xbox 360 and PlayStation 3 on May 19th.