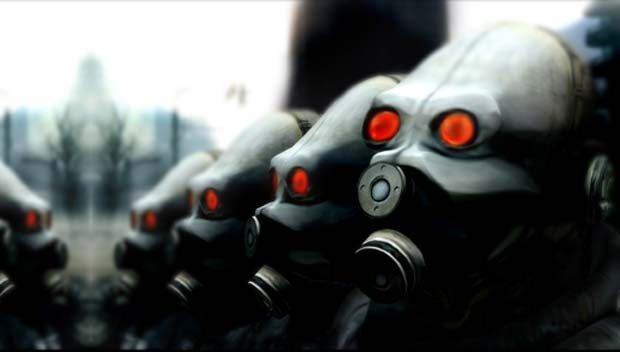 First person shooters are a staple in video game culture and have not been around for a very long time. Despite this, many fantastic FPSs have been released and I have compiled a list of the best first person shooters ever made in my opinion. The list is in order from 10, being the lowest, and 1, being the highest. All these games are great however and all must be played by FPS fans. 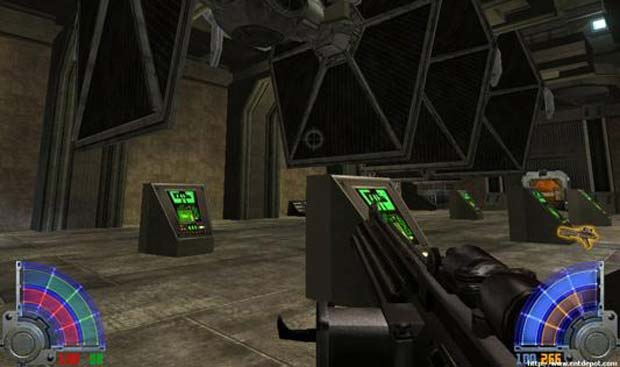 Star Wars has always been dear to my heart. First person shooters in the Star Wars universe however have not. That was until I first played Jedi Academy. The game combines great action mechanics into the wonderful world of Star Wars. The ability to seamlessly switch from rifle to saber with force powers mixed in makes it a true Star Wars game that is both fun to play and accurate to the mythos. It was one of the first games I thought of when compiling this list, though many great games are yet to come. 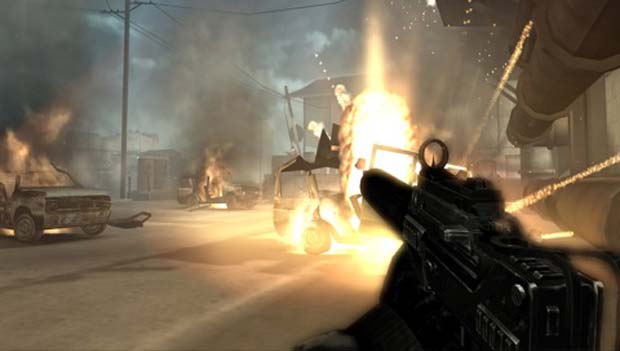 Black, the Criterion game that should’ve been bigger than sliced bread, is number nine. The multiplatform shooter contained intense firefights and environmental damage before it was thought to be possible. It pushed each system’s abilities to their limits with dazzling visuals and a solid physics engine. Not only was it technologically amazing but it was a solid game. It had its faults but the concept was there for great things in the future. Unfortunately the game’s lack of sales and general disinterest has seemed to scare Criterion away from the FPS genre, but hopefully a Black 2 is a possibility. 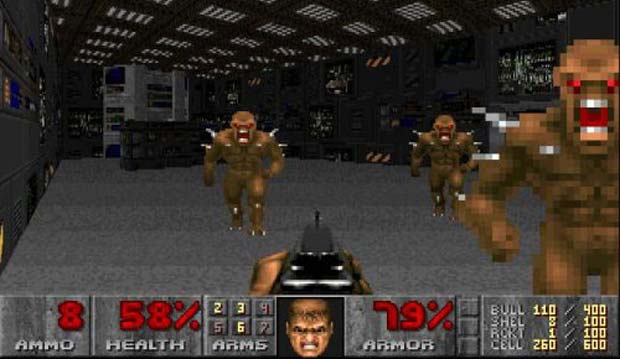 I couldn’t write this list without mentioning Doom. It was one of the earliest FPSs out that would make you scream like the opposite sex that you were at the current time you played it. Looking back on the game, it’s junk, but in relation to the time it was released, you have to admit it’s fairly impressive. Although extraordinarily linear and obviously graphics that would make you yawn by today’s standards, it’s always a good idea to go back for at least nostalgia’s sake. 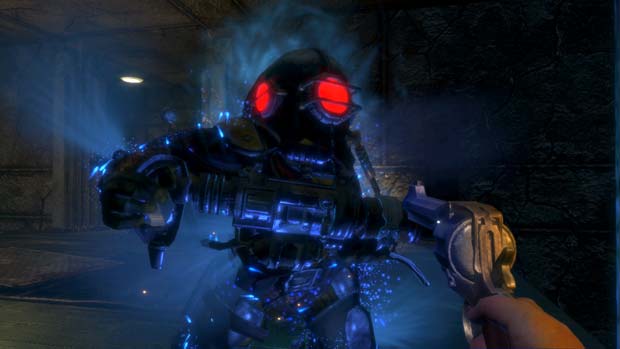 It may seem unfair to include current first person shooters in the list, but it’s the best of all time, not of the 90’s. Bioshock was a big success for combining the always lovable FPS format with an intricate story, unique gameplay elements, and a terrifyingly strange world. The game was a brand new idea in a WWII run genre and a welcome change in many gamer’s hearts. Onwards… 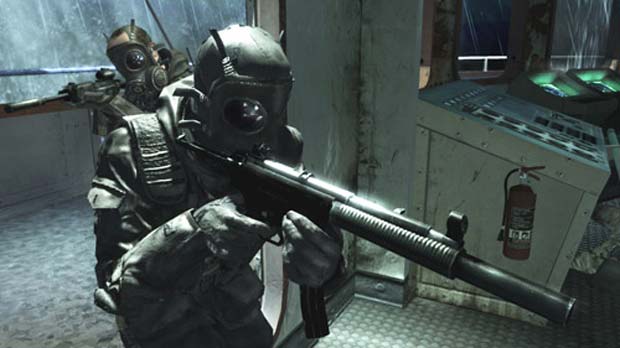 Infinity Ward has become the singleplayer set piece artists who also know how to make a powerhouse of a multiplayer mode because of Call of Duty 4: Modern Warfare. CoD4 started what is now becoming an almost necessity in a shooter: online leveling. That one idea made the game break records and top charts while no other FPS could compete in sales. It also set the bar for every other Call of Duty game to follow and has helped push forward several other very successful titles. Black Ops and Modern Warfare 2 are great games, but Call of Duty 4 started it all. 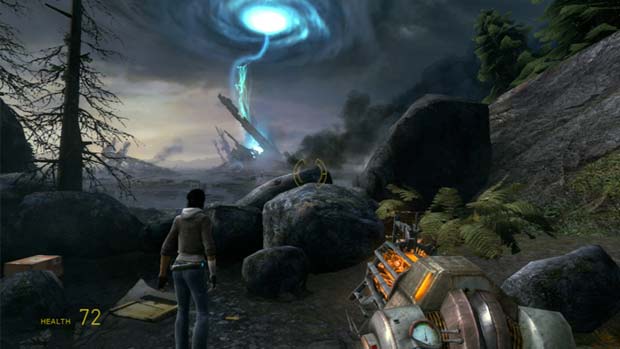 Half-Life 2 changes the direction yet again, going back to a slower paced shooter. Half-Life 2 won numerous awards when it was released and rightfully so. Similarly to Jedi Academy, it combined puzzling with shooting. The combination became gamers’ peanut butter and chocolate as it racked up sales and was beloved by critiques and gamers everywhere. The amazing world, groundbreaking visuals, interesting story, lovingly crafted physics, and sci-fi gadgets came together to make this incredible game. 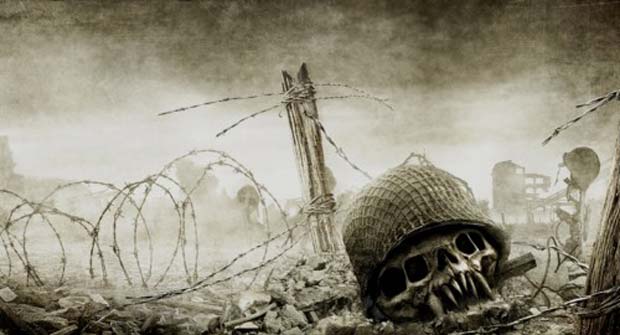 The Playstation 3 had a very rocky start when it was released back in 2006 but the one game that early adopters and critiques both rejoiced over was Resistance: Fall of Man. Almost a satire of the saturated WWII market, Resistance placed players in a war which at first feels like another World War affair, but quickly transforms into a sci-fi epic. Following a single character throughout, the game takes you to around Europe as you fight off the chimera swarm. Unique weapons, enemies, and locations as well as the technical achievements, make this shooter my fourth favourite of all time. 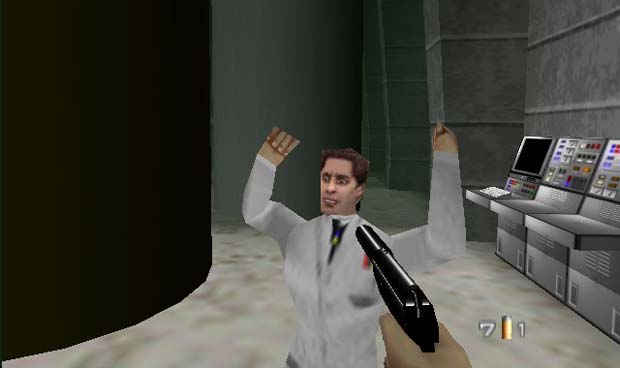 I doubt there is a single FPS list in existence that doesn’t mention GoldenEye. GoldenEye is the game that, at least for me, really showed how amazingly fun spilt screen could be in a shooter. Even today I prefer split screen over online multiplayer for the mere fact of the social and physical competition that stems from it. GE also had a memorable campaign and I for one can almost recite the entirety of the first level in my head. Still, the fun was in split screen and split screen is where the cool kids played. Cheats like paintball mode made it somehow last even longer. I can’t think of a game that deserves number three more. 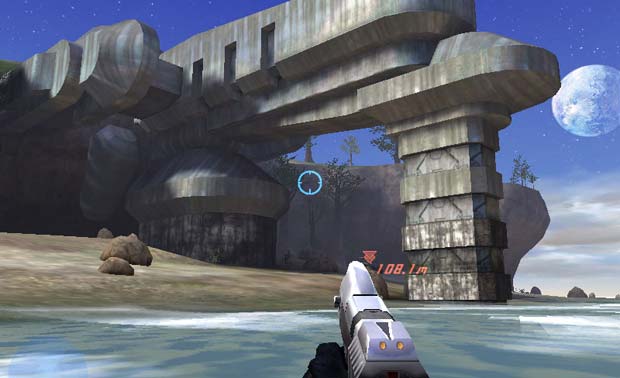 The first Xbox exclusive on the list snags the number two spot and is the one and only, Halo: Combat Evolved. It was seen by many as the first well made first person shooter for the console. It combined the ever popular sci-fi genre with a badass character in a very non-linear world. The campaign was fantastic, but again, multiplayer is where it was at. Halo introduced many great multiplayer features and had Xbox gamers rejoicing and helped give Xbox Live a name. I know I have spent many hours back in school playing some LAN games with my friends on the computer while my teacher would just talk. Remember, never pay attention in school. 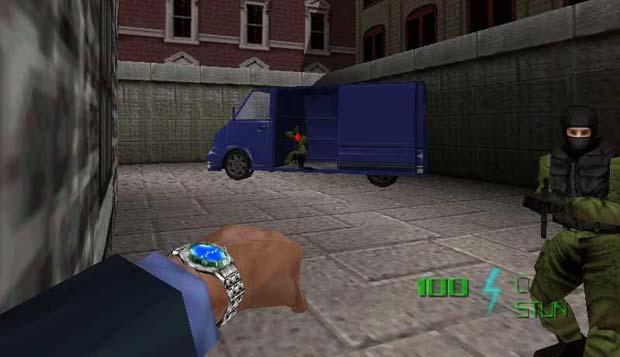 1.  James Bond: The World Is Not Enough

Probably the most controversial entry, if the harsh definition should even be applied, in the list is the number one spot which goes to James Bond: The World Is Not Enough. I loved GoldenEye but TWINE was a big improvement in my eyes. The weapons and maps, in reference to the multiplayer, were all tweaked and changed for the better and of course they added AI bots to the mix to steal even more of my time. The James Bond franchise was at it’s height during this time, and TWINE is my absolute favourite FPS of all time.

There are plenty of great first person shooters out there and here are some honourable mentions:

That was my list. Hopefully no one gets too fumed if their favourite game wasn’t mentioned.