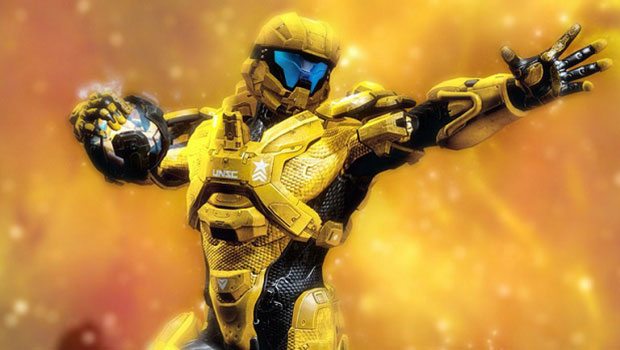 For the first time since the launch of Halo 4, a playlist entirely devoted to Grifball will be added to the  mixture of game types in Halo 4 multiplayer.  343 Industries recently announced that next week’s update will include episode seven of Spartan Ops, new specializations, and the playlist update that features “several different Grifball experiences”.

“We’ve worked closely with the Grifball Hub to create several different Grifball experiences in this new matchmaking playlist,” said Jessica Shea of 343.   “Grifball is, without a doubt, the greatest online sport. The game type was first created by Burnie Burns of Rooster Teeth back in the days of Halo 3, where it gained an online following and quickly became one of the most played custom games in the history of Halo Multiplayer. It features two teams of four, who are equipped with Gravity Hammers and Energy Swords.

These teams spawn facing one another in a large arena known as “the court.” In the center of the Grifball court lays the ball, or bomb. At the start of the match, both teams rush towards the bomb in an overall effort to plant it at their enemy’s spawn. If you haven’t yet played and the above sounds complicated, don’t worry – you’ll get the hang of it right away, and likely play for many hours and forget that you have any responsibilities at all.”

Also in the update, the Engineer and Stalker Specializations will be made available, and you can find the descriptions of those two, below.

Engineer – Spartan optimization for the subversion, repair and reconstitution of a wide range of technology, including Covenant and Forerunner complex networks. The Drop Recon Armor Mod allows users to predict the location and time of an Ordnance Drop through an external suborbital monitoring system.

Stalker – Spartan optimization for target shadowing missions which require tactical invisibility despite operating at an extremely close range to the target itself. The Nemesis armor mod allows users to target and track down previous attacking enemies, highlighting them on the armor’s passive sensors.

Yesterday, Shea also spoke about the Forge maps that currently reside in the Community Forge Playlist.  This user-generated content could be integrated into different playlists, but that it might take a couple of weeks.