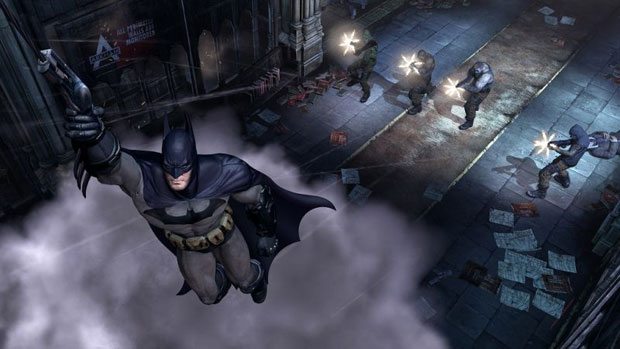 Rocksteady’s Batman: Arkham Asylum broke the mold. A mold created by decades of misques by game developers when attempting to use licensed material from our favorite comics.  In those previous ventures nine times out of ten, the end result was a diasterous clusterfluck leaving nothing in it’s wake but disappointment. Arkaham Asylum changed the game in some regards, and set a new bar for comic books games to measure up to.  Most importantly, Rocksteady showed that it was indeed possible to harnass the badassery of a comic book and make a video game that measures up for both audiences.

If you’ve been following the intel being sparingly released up until now, you know that Arkham City is a much larger game than it’s predecessor. Exactly how much larger, is to be seen, but it’s described as about four times larger than Arkham Asylum. Our hands on preview of the game, which occurred at E3 2011 didn’t afford us to check out all that Gotham had to offer, with many of games sections inaccessible for the purpose of the demo. As it was explained, the game will constantly be evolving with sections of the city being unlocked as you progress through the game. While you might not be able to get down to the ground level of all areas that can be seen due to the rioting inhabitants of the city, from a birds eye view, Gotham is massive in Batman: Arkham City. Did you ever wonder what it feels like to be perched atop a building of Gotham City to survey the city that you’ve sworn to protect? If so, you’re in luck.

If Arkham Asylum was about empowering the player to put them in the shoes of the Batman, Arkham City is definitely about the refinement of that experience. Refinement in the sense that there is plenty that returns to the game that will be very familiar to fans.  That being said, Batman: Arkham City doesn’t stray very far from the path with it’s combat mechanics. Going from roof to ground held the opportunity to try out some new equpiment that the Caped Crusader will be utilizing this time around, giving you the ability to swing into combat, catching your enemies by surprise in a seamless fashion.   The original had a great combat system that really empowered the player, and this time around it feels like the developer really nailed the element of surprise.  Using the gadgets to get the jump on your enemy was a great feature of the first game, and feels even better this time around.  Small tweaks, and better fluidity left a lasting impression.

Even in the small portion of the game that we got to play, Arkham City makes it perfectly clear that it’s an even deeper experience than the previous game.  A much larger table is set in Batman: Arkham City.  The city seems to be teeming with life (or death), but the bigger thing at play is that it feels like the living breathing world of Gotham that has been recreated from the comics.  A seedy place, a place that is definitely in need of someone with your skill set.  And since your skill set involves beating baddies to a pulp with your fists, and baffling them with your advanced technical gadgetry, you’re in the right place.  Expanding on those skills that made Batman: Arkham Asylum such a joy to play, is what immediately sets Arkham City apart from its predecessor.  If you’re into subtle improvements that make the great, extraordinary, you’ll likely fall in love all over again with Arkham City, I  did, and the demo was fairly brief.

Our time with the demo was short, but in that time you could tell that Arkham City is a much more dynamic place than before. A much more lively place, where you’ll have your hands full of things to do, people to see, and criminal plans to foil. Told from a place that fans of the darker of the Batman comics will certainly appreciate,  Arkham City definitely feels like it has even more of an edge than it’s predecessor. Having just about their only competition as themselves in the comic book game adaptation gig, Rocksteady has done a fine job at making their first offering look like childs play compared to the sequel.