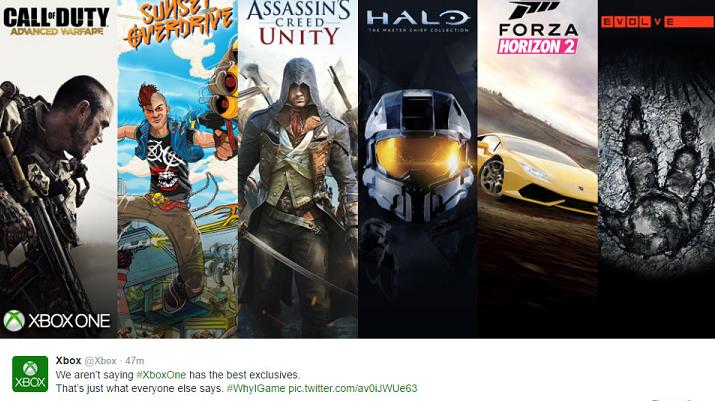 The official Xbox twitter page oddly tweeted out an image saying some huge third-party games are Xbox One exclusives. That’s kind of misleading.

The tweet showed images of Call of Duty: Advanced Warfare, Sunset Overdrive, Assassin’s Creed Unity, Halo: The Master Chief Collection, Forza Horizon 2 and Evolve. Out of the games listed, only three of them are Xbox One exclusives. If you want to get technical, only Sunset Overdrive is a real Xbox One exclusive. Forza Horizon 2 is getting an Xbox 360 version. Halo: The Master Chief Collection is a remake that contains old Halo games. It’s an Xbox One exclusive sure, but the older games were released for the Xbox and Xbox 360 too.

The official Xbox twitter page shouldn’t have misled people into thinking all of these games are Xbox One exclusives. Call of Duty: Advanced Warfare is also coming to Xbox 360, PC, PS4 and PS3. Assassin’s Creed Unity is coming to PC and PS4. As for Evolve, that game is coming out on PC and PS4 too.