"One moment left. One point of space and time. I know who you are. You are destiny." -from Marathon Infinity 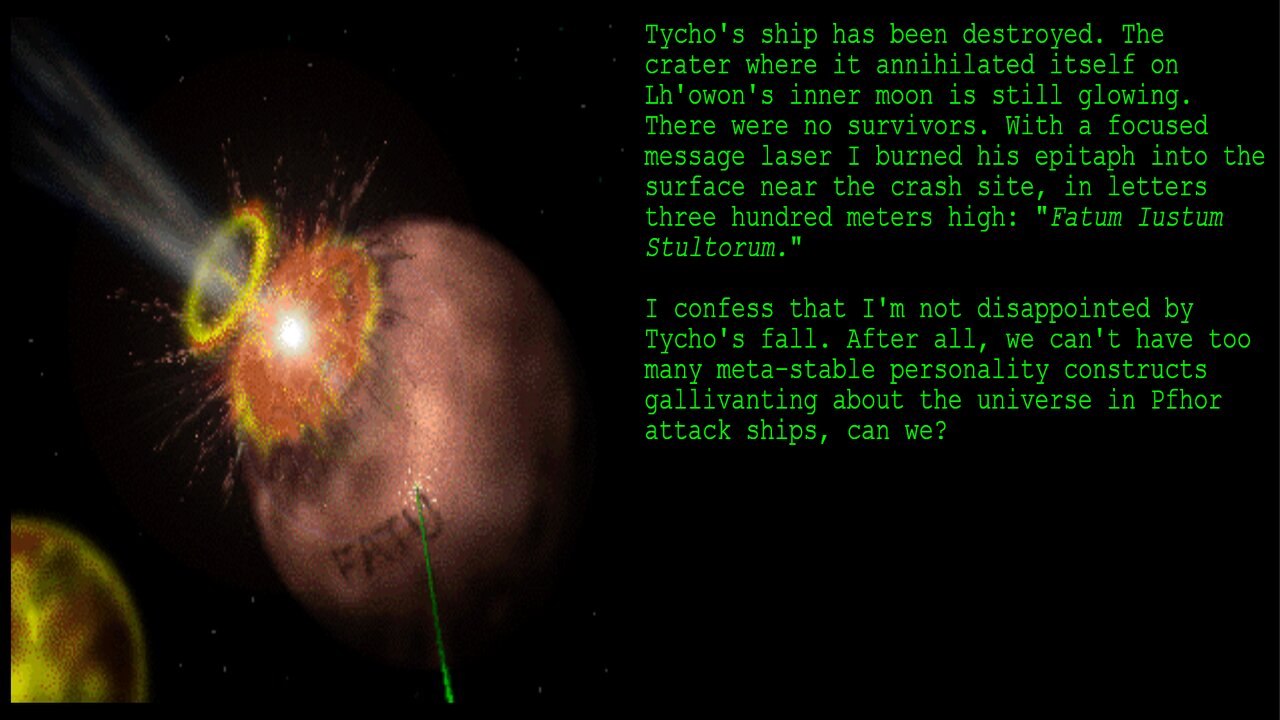 To some longtime fans, Bungie’s big three franchises are something more than isolated explorations of the space-shooter genre. Destiny, the studio’s current venture, is host to a myriad of themes, phrases, and (allegedly) even characters from Bungie’s previous titles. While this only rarely includes Oni, Bungie’s forgotten 3rd person, Ghost in the Shell-inspired adventure Rockstar collab, echos of the Halo and Marathon series resound across the post-collapse Solar System. Today, we’re here to look at 7 (Bungie’s favorite number) of the most interesting of these references in Destiny. 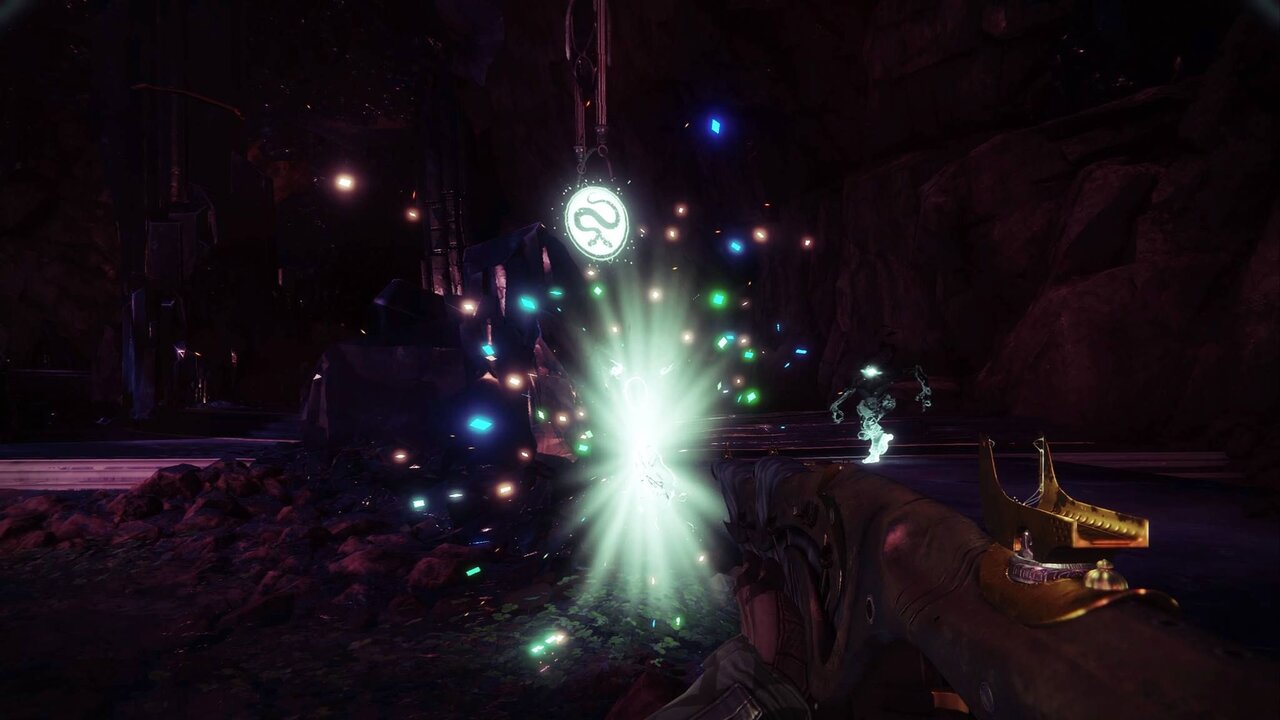 One of the mainstay gags of the Halo series has been its Skulls. These collectibles (literally skulls found in the level) become toggleable from the mission select menu have major impacts on the game. One famous example is the “Grunt Birthday Party” skull which rewards the player for headshots on grunts with a burst of confetti and children cheering. This same gag reappeared in Destiny 2’s Last Wish raid and can be activated by completing a short shooting puzzle in-game. 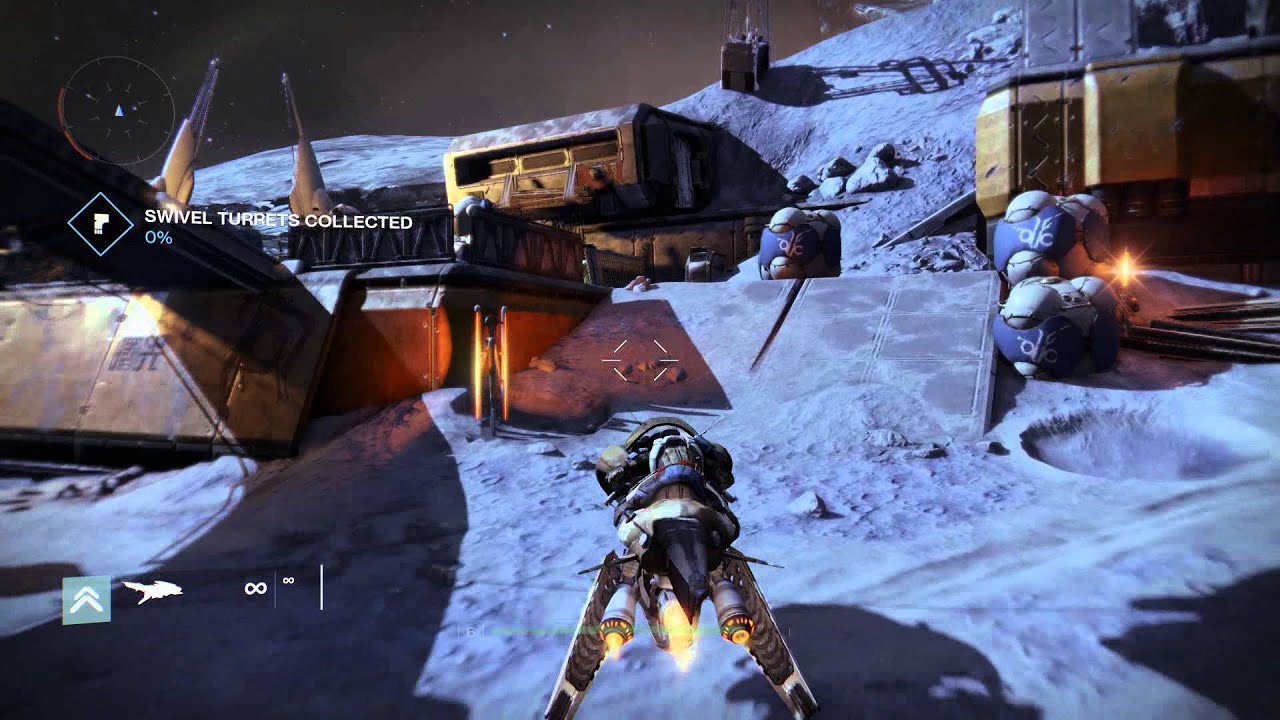 This reference is a fairly straightforward nod to a classic level of Marathon with roughly the same name. One of Destiny 2’s bread and butter patrol missions is known as “Low-Flying Defense Drones” while the level from Marathon is known as “Beware of Low-Flying Defense Drones”. The goal in both missions is to, you guessed it, do violence unto low-flying defense drones before they can unto you. Luckily in Marathon, some of these flying deathtraps are friends not food for your righteous MA-75 assault rifle. 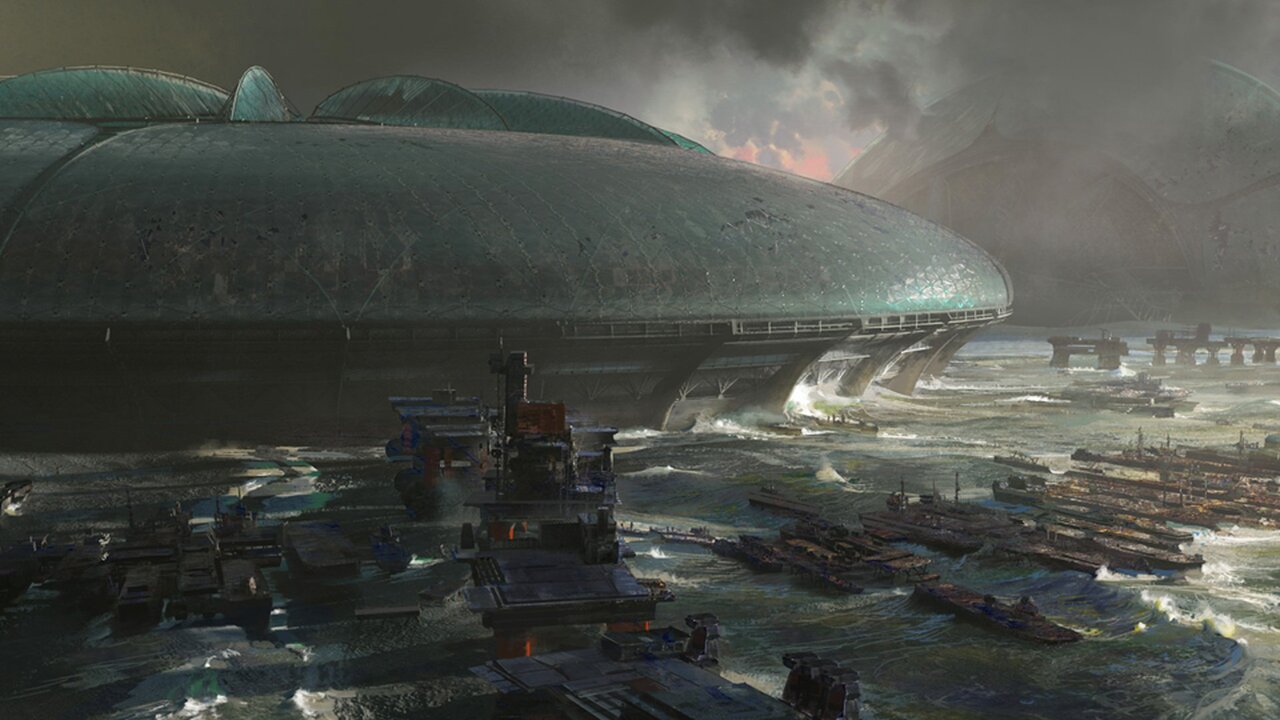 Destiny players may remember blasting through Hive and House of Duskers at New Pacific Arcology, a location on the now inaccessible planet Titan and site of a once-great Golden Age city. The planet’s various arcologies were research-complexes dedicated to expanding humanity’s understanding of the very alien environments and species of the methane-seas. This name “New Pacific” appears to reference a track of the same name from the first Marathon game’s OST. Keeping with this theme of study and exploration, the track (specifically #10 New Pacific Reprise) is first heard by the player during their first time aboard a Pfhor alien ship. 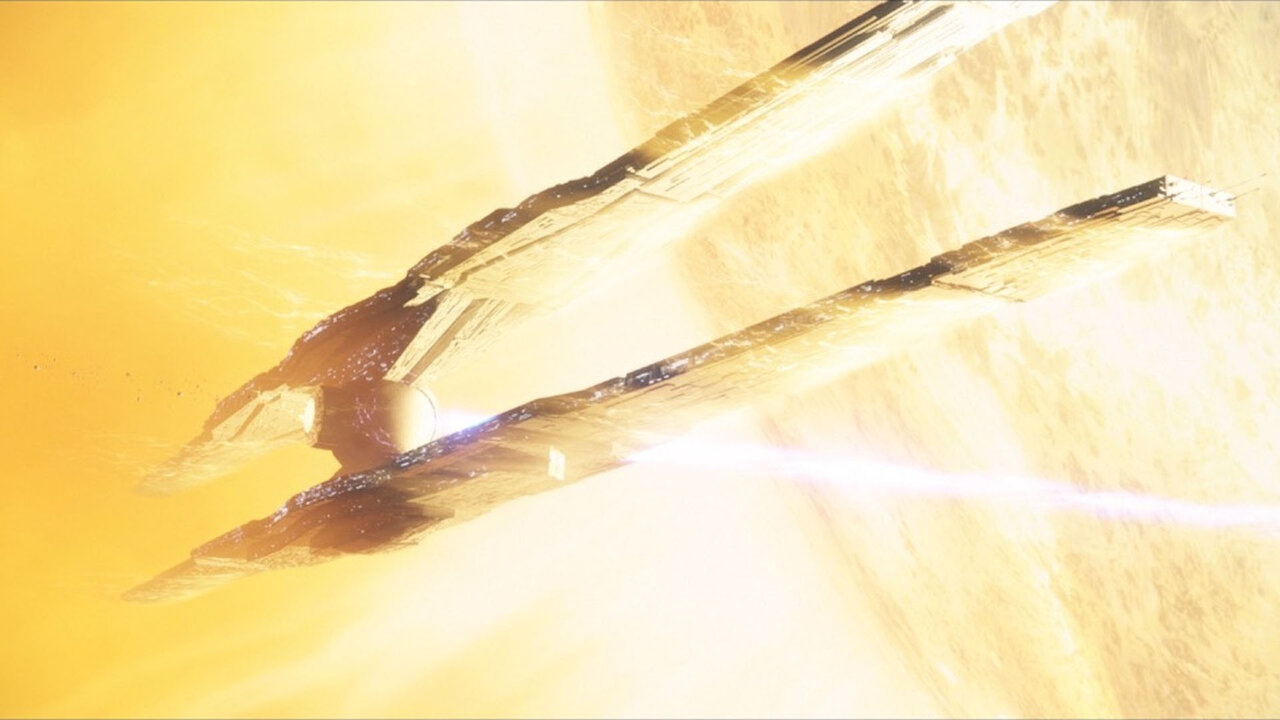 A lot of authors like to tell stories of world-ending (or even universe-ending) proportions. In science fiction, this often manifests as a doomsday device which then becomes the center or setpiece of the plot (after all, the whole point of the Doomsday Machine is lost if you keep it a secret). Destiny players may remember The Almighty, a Cabal superweapon that was once poised to annihilate the Solar System, devouring Mercury for fuel, but which now orbits the Sun as nothing more than angry wreckage. This device bears a striking resemblance, both in form and intended function, to Trih Xeem. This weapon from Marathon 2: Durandal and Marathon Infinity was also a system-destroyer, designed to force a star to go supernova and reduce its satellites to nothing but a “thin shell of plasma”. The original Halo trilogy is of course all about superweapons, though these do not share the other two’s physical appearance. The Halo Rings and Ark are more of a spiritual reference, an indicator of just how much Bungie writers enjoy exploring this narrative design space. Fan theories go pretty deep on just how interconnected the three famous space shooters’ stories are. One source of great discussion in this regard is Destiny’s MIDA Multi-Tool exotic scout rifle. MIDA is also the name of a revolutionary political movement in Marathon’s story, one that seized control of Mars for a short time. Their rule is described as “ruthless and cruel” and their subsequent covert actions more than likely set the stage for many of the events of the Marathon series. Intriguingly, the lore tab of Destiny’s MIDA gun states that it was “designed by primitive AI and manufactured for use by a ‘revolutionary government’ named MIDA”, that “MIDA’s brief reign killed a full ten percent of the Martian people”, but also that no records exist to confirm the story. The lore tab suggests that the gun may have come from “another timeline, perhaps through Golden Age experiments”. Is it just an homage? Or something more? A fan-favorite level of Destiny 2 is the timed platforming puzzle “The Whisper”. This high tension level included tight jumps, an eerie but beautiful environment, and a fitting reward, the Whisper of the Worm exotic sniper rifle. Before The Darkness consumed the outer planets, and with them this level, players could receive this mission during a public event on Io. Interestingly, Io is mentioned in the opening level of Halo 2 by Cortana when she tells the player and the crew that she heard “Whispers, coming from Io”. Were those whispers just Covenant scout ships? Fatum Iustum Stultorum, so spoke the rampant A.I. Durandal in white-hot mining laser upon the face of Lh’owon’s inner moon. Seriously though, Durandal might be one of gaming’s best-written trolls. Playing through his namesake game is worth it for his lore terminals alone. This famous statement, roughly “the fate of fools”, reappeared as the name of an exotic scout rifle in Destiny. This gun, which then later became the Jade Rabbit, is the game’s most exclusive gun. Its original form was only ever distributed to one player, Trifecta01, as a gift from Bungie following a year of intensive brain surgery. It is also interesting to note the heavy resemblance between this gun’s original look, the No Time to Explain exotic, and The Stranger’s Rifle exotic, two more guns associated with alternate timelines like the MIDA. When a company’s IPs deal so heavily with alternate timelines and multiple universes, who’s to say they aren’t connected? 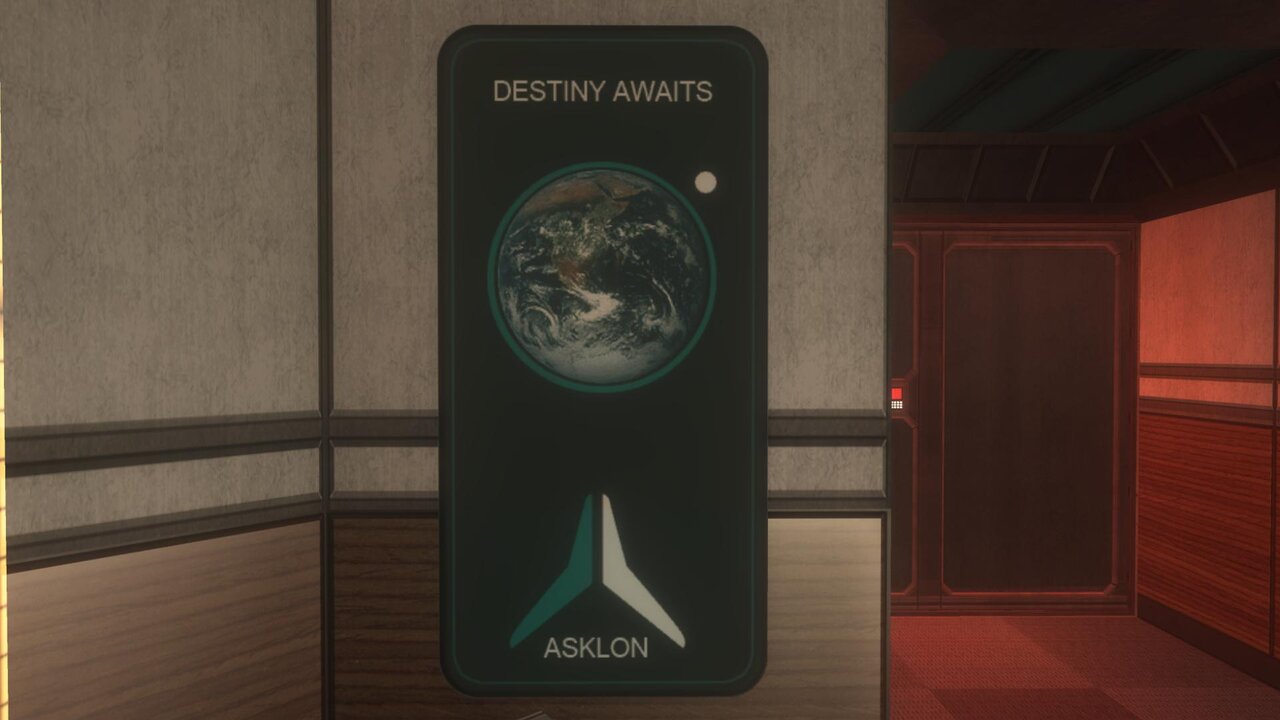 Bungie’s games have always had their fair share of easter eggs, like this teaser for the original Destiny game that can be found in Halo 3: ODST. If you’re interested in reading about more of Destiny’s easter eggs, you can check out this article! Also, since the whole Marathon series has been made open source by Bungie, why not make it the next franchise on your list?