The 15 Best Spirit Ashes in Elden Ring According to Players

Which were at the top of the food chain? 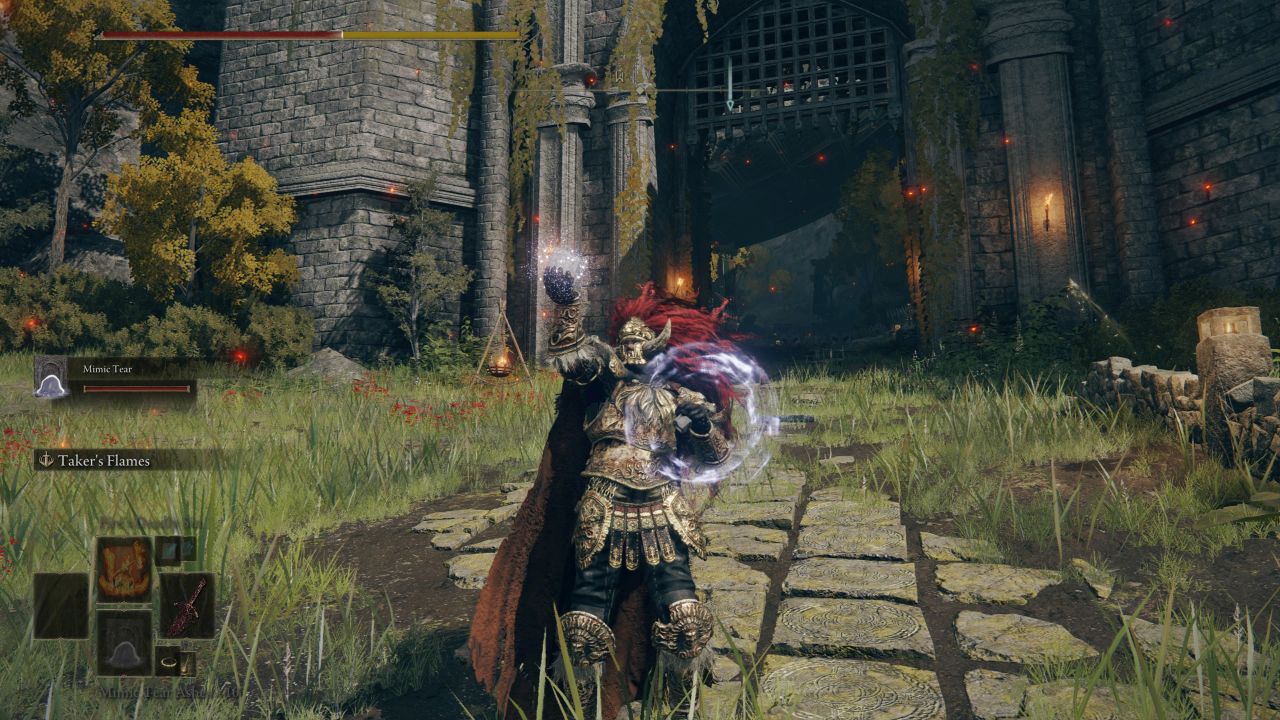 Elden Ring presents players with so many things to use in their gameplay, it’s quite wild to see that new builds are being made months from launch. We have definitely formed a meta at this point, and some statistics are here to prove that to an extent. In a Famitsu survey conducted in early April, they had about 1,700 participants who answered questions ranging from favorite bosses, NPCs, and even areas. In this survey, people also answered what their favorite Spirit Ashes were. Here, we’ll show and analyze the 15 best Spirit Ashes in Elden Ring, according to players.

In the Famitsu survey, the people answering were able to choose up to five of their favorite Spirit Ashes. Of all you can possibly equip in the game, the top fifteen are in ascending order. 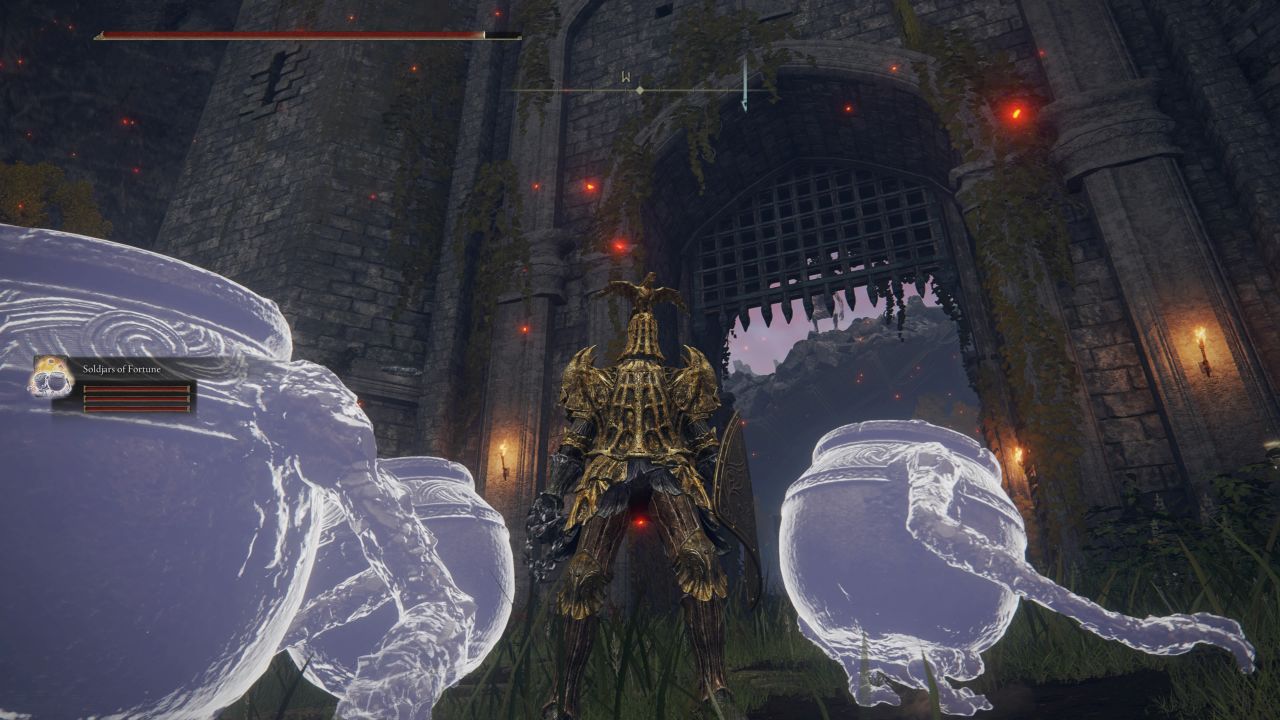 There were no explanations given how the Soldjars ranked so high in the survey. What we can assume is that because of the love for Iron Fist Alexander, people, in general, liked the wholesomeness and memes that came from the warrior jar along with their clever design.

These Spirit Ashes aren’t what we’d consider being “top tier”, let alone high tier. They can take a good amount of damage for what they’re worth, but the moment they take any kind of fire damage or lethal damage, they explode on death, hurting nearby enemies and you. The Marionette Soldiers are a solid choice to help with the mid-game portion of Elden Ring. Their barrage of arrows can stagger smaller fries and help break the posture of tougher enemies and even bosses. They complement melee builds very well, especially when the player draws aggro so they can continue their arrow shooting. The Marionette Soldiers are annoying enemies to deal with. However, when they are on your side, they become the enemy’s nuisance. 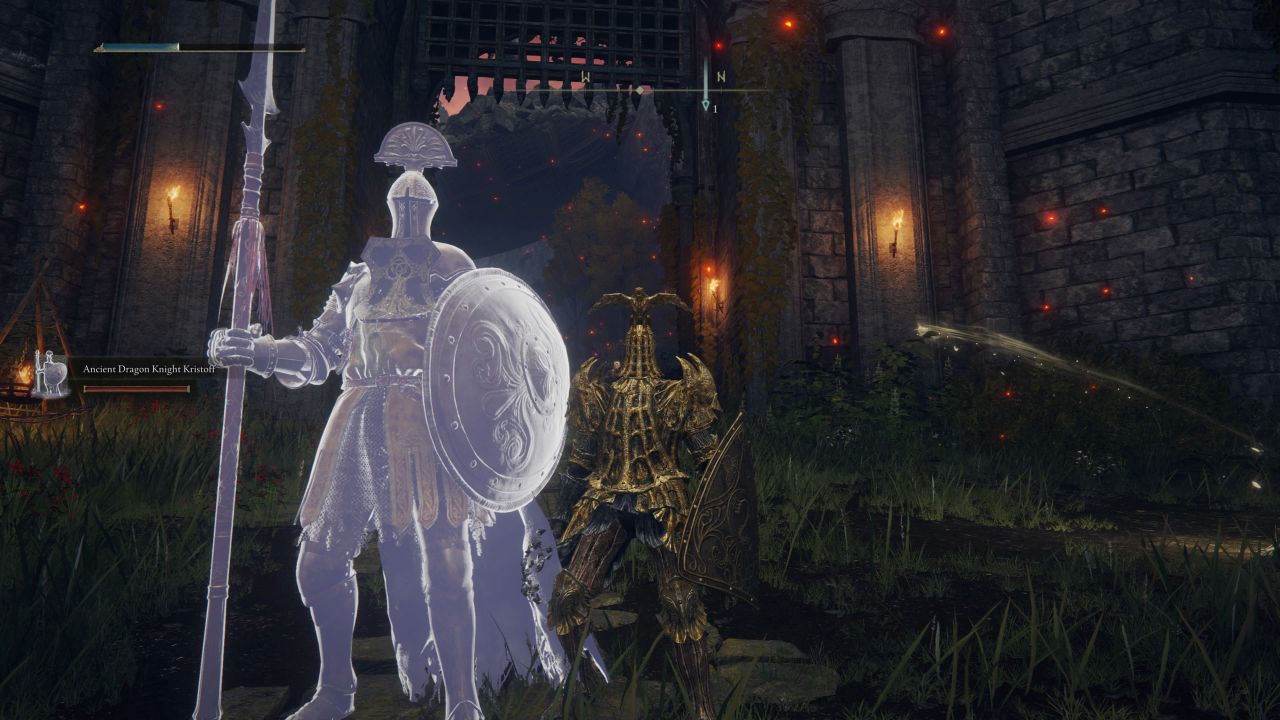 Leyndell Knights are some of the most dangerous enemies to fight in Elden Ring. They can negate damage because of their great shield and deal immense damage from melee and their lightning strikes. To have one fighting by your side can prove to be extremely useful. It’s no surprise that a named version of it as a Spirit Ash ranks as high as it did. 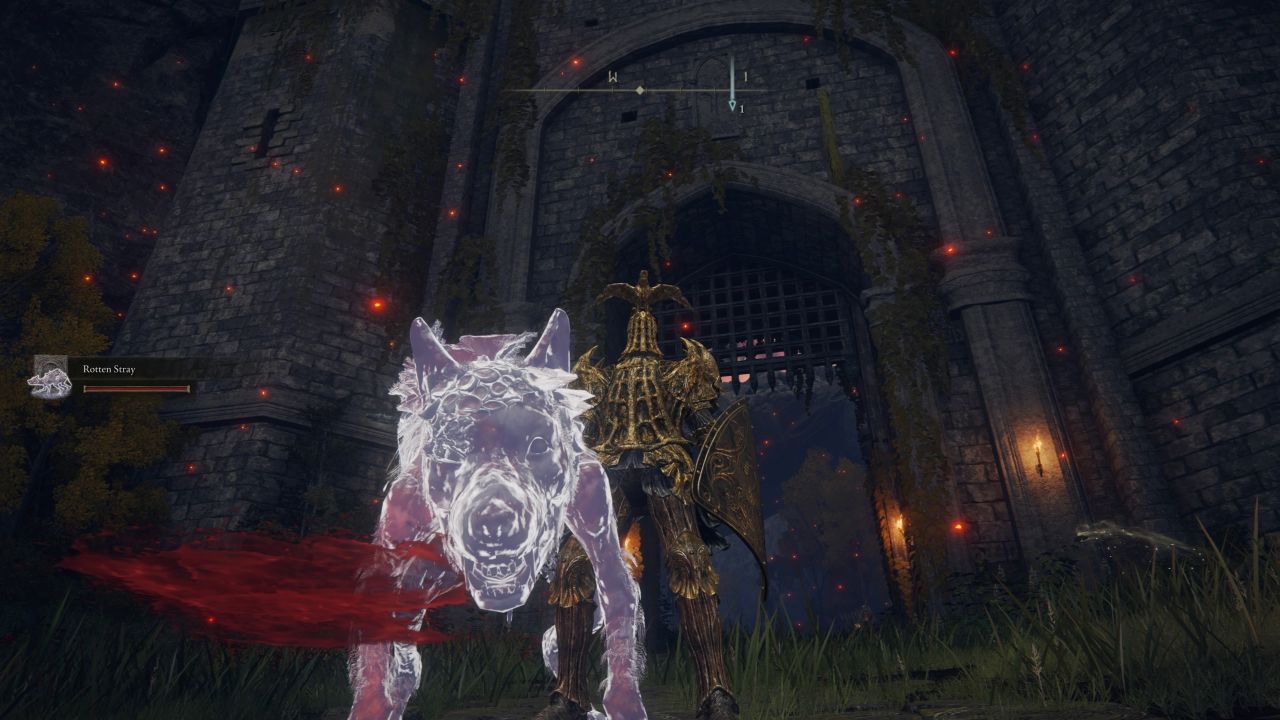 For people who really liked the Lone Wolf Ashes in the early game and still wanted a canine companion, the Rotten Stray was a good alternative. It might not come in numbers like the wolves, but what it can do is inflict Scarlet Rot. With just a few successful hits, the Rotten Stray can prove its worthiness by maintaining harsh DoT against even the toughest bosses beyond its death. When Elden Ring just came out, the Nightmaiden and Swordstress were considered one of the better summons. They cast decent spells and fought with ranged attacks. They were a better replacement for ranged summons like the aforementioned Marionette Soldiers because of their damage output. They are still quite unique to have by your side, even if they do cost quite a bit of FP to cast. 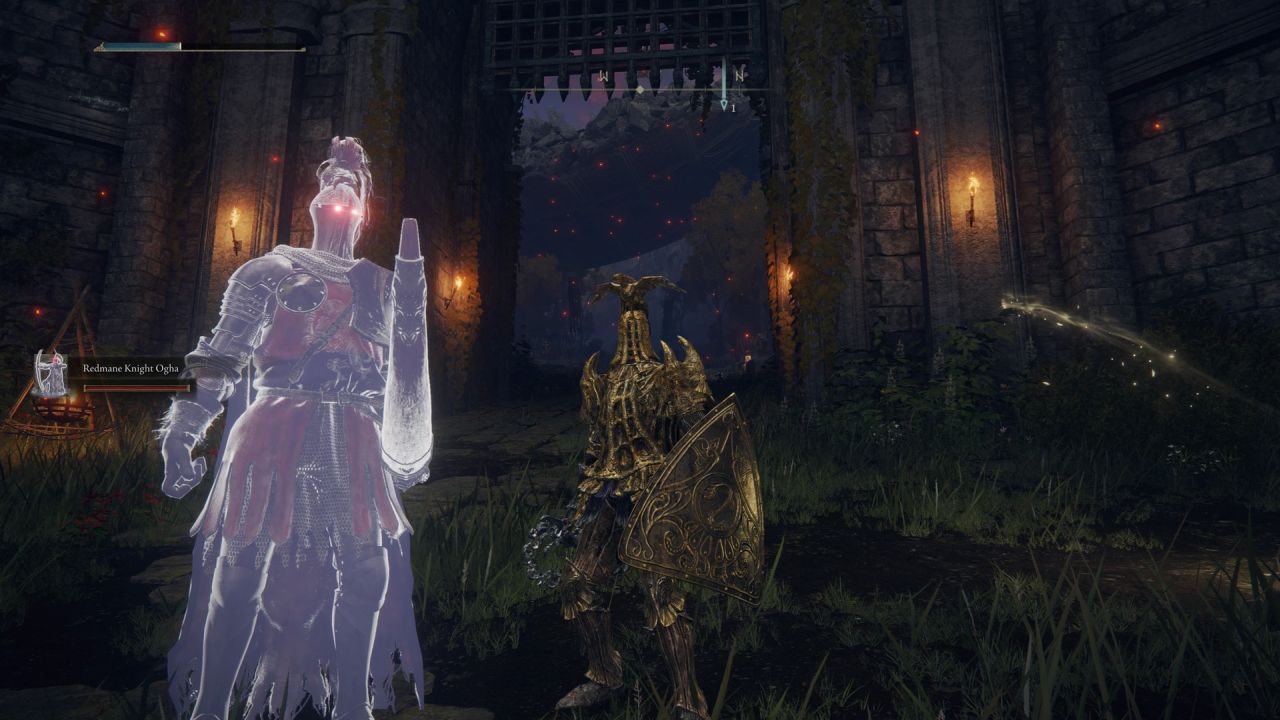 Like many other knight summonses, Ogha has good offensive and defensive capabilities. The difference between him and the other knights is that he will act heavily on the offensive when first summoned. After being in a battle for some time, he will also conjure up an arrow rain, similar to that of Radahn’s abilities in his fight. Oghaa is good for when you want burst damage, so the popularity shows mostly for his utility. 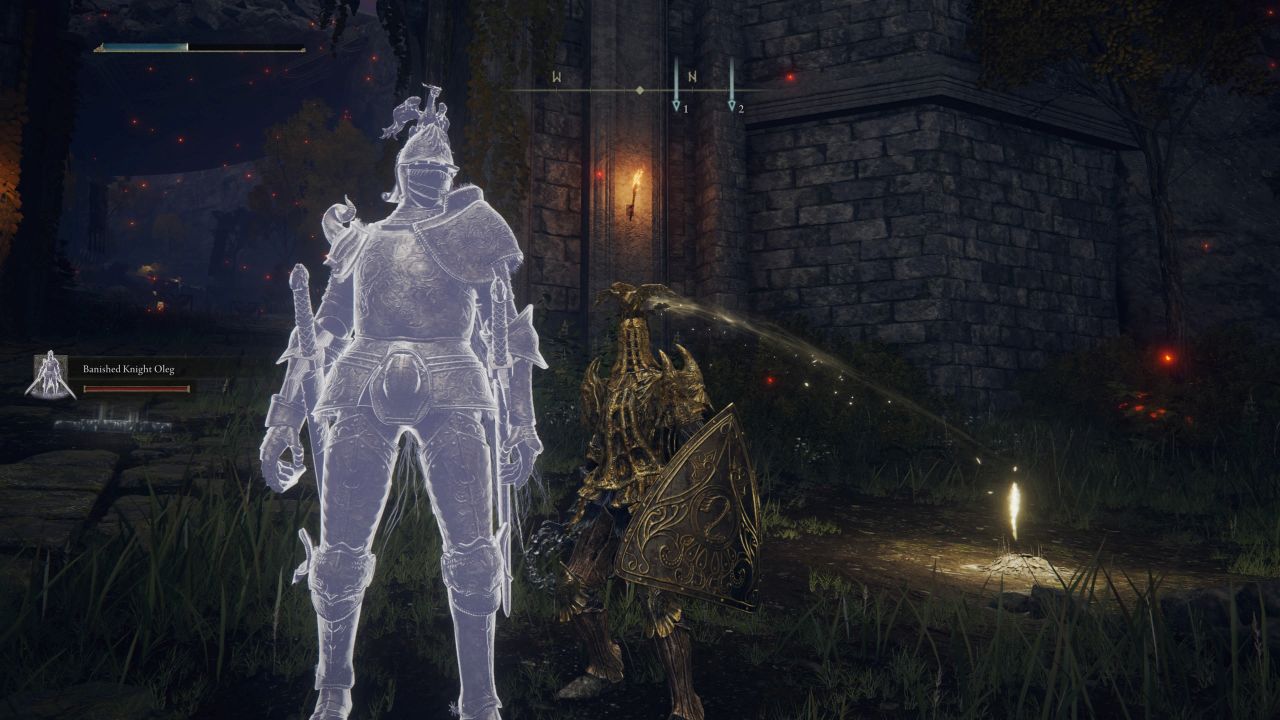 Banished Knight Oleg is quite the powerhouse. He takes on the fighting style and appearance of the knights you fight in Crumbling Farum Azula. This means he’s high on the offensive, giving opponents little room to go in for attacks. As a spirit summon, he can also stand his own. Oleg is an overall good pick for people using all sorts of builds. Of all the warrior-class elite Spirit Ashes, Lhutel probably takes the cake for the best all-rounder. While the other knight summonses can do just fine on their own, blocking can only negate so much damage. This is where Lhutel has the upper hand. She can teleport and make use of her shield, so she can outright avoid damage and provide aggro away from you. She’s also the only summon who can cast Death Blight. 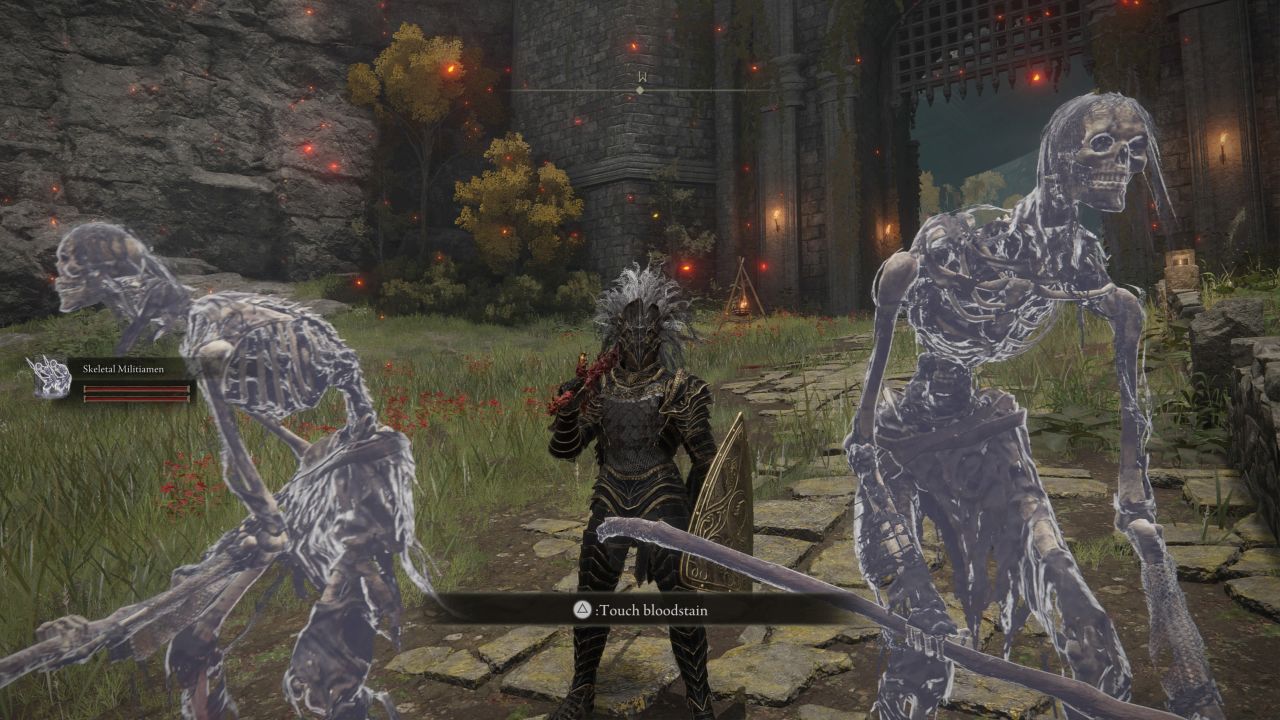 The Skeletal Militiamen were the next best alternative to early-game Spirit Ash summons in Elden Ring. It was a battle between them or the Lone Wolves. The Lone Wolves provided a bit more DPS and stagger but died quickly. The Militiamen had a lot more utility because they can live indefinitely if their self-revives were not interrupted. 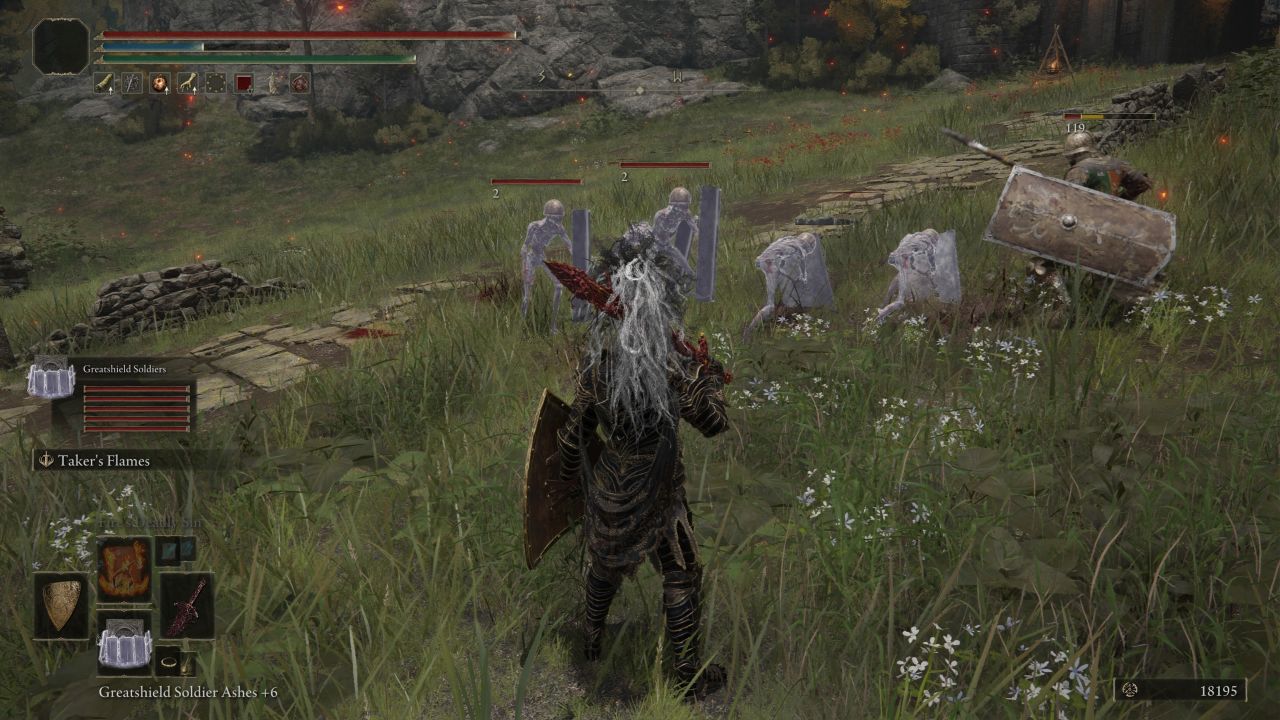 If you wanted your Spirit Summons to act more as a means of drawing enemy aggro for free hits, the Greatshield Soldiers were a godsend for the mid-game. You summon five soldiers who can block a lot of incoming attacks. Strength comes in numbers, so they can also stagger bosses and give you easy backstabs and finishers. People who were stuck in the early game of Elden Ring often sought out any summons to help fight alongside them in fights. The one that was most accessible to the start was the Lone Wolf Ashes. Since this was also the first FromSoftware game for many people, they had to learn how to telegraph enemy attacks but needed some kind of handicap. The Lone Wolves wouldn’t be able to solo anything, but provided good distractions! 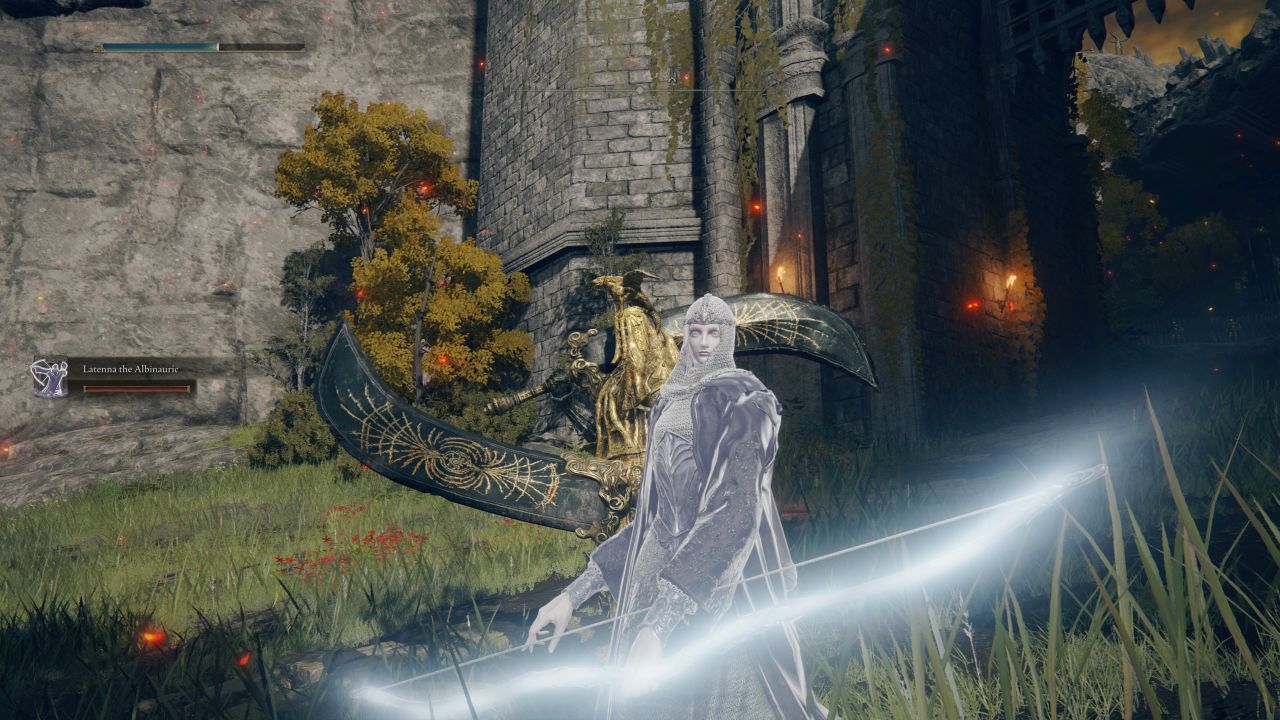 In the recent patches that balanced the items in-game, the meta was becoming more clearly defined. For melee builds, one of the best Spirits was Latenna. She can deal some crazy damage from afar, making her a strong choice for people who run melee builds. While they provide offense and constant aggro, Latenna can sit pretty from afar and wither down the toughest enemies’ health to zero. 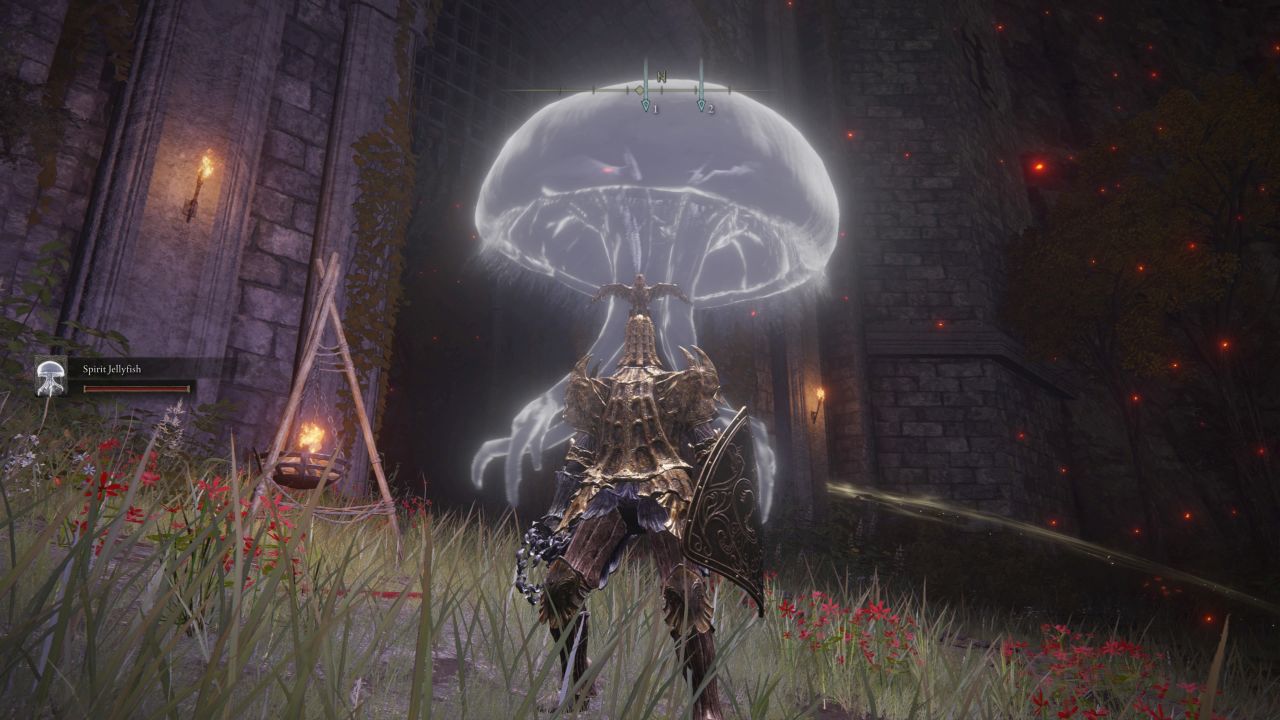 The Jellyfish being the third most popular pick in this survey makes sense. They’re obtained rather early in the game and can provide good aggro and utility. They don’t really do well later in the game, so they serve as a throwaway for aggro and quick poison DoT. Perhaps they are also aesthetically pleasing to look at, who knows? 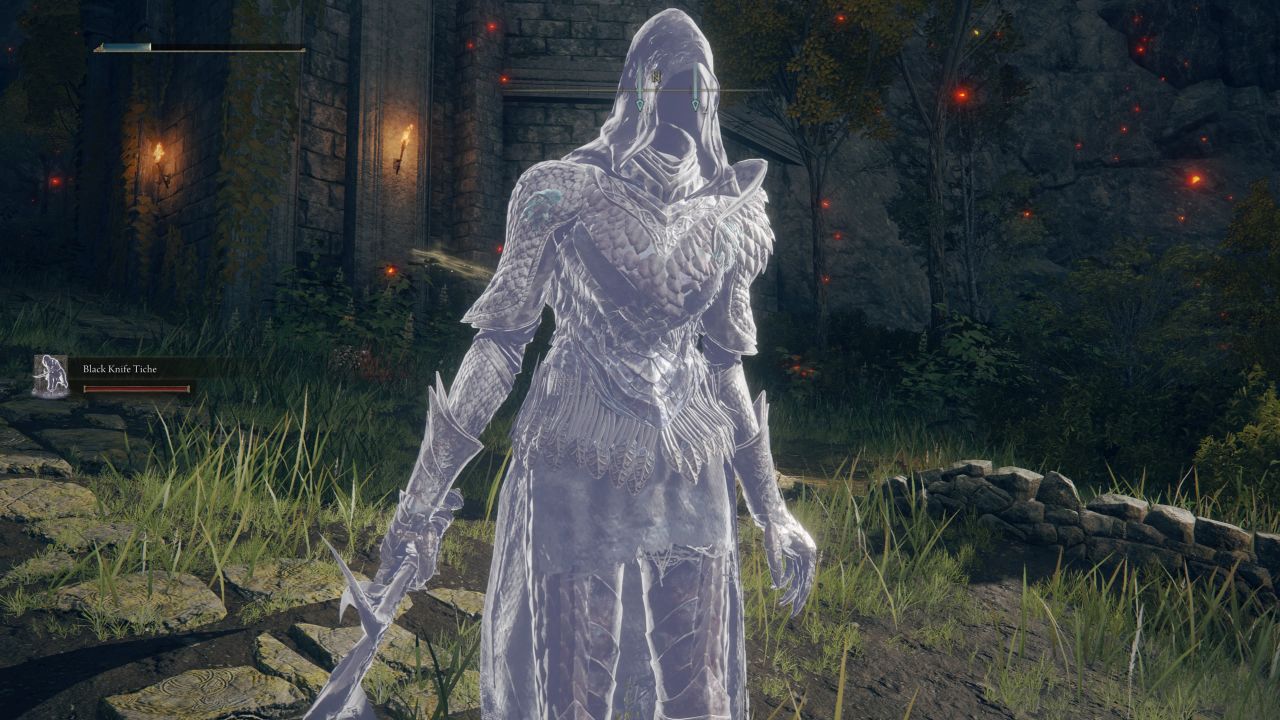 When the first wave of nerfs came to Elden Ring, a lot of struggling players needed a solid backup for what could be the next best Spirit Ashes. That’s where Black Knife Tiche came in. She can deal some serious damage and inflict Bloodflame, which is considered the best form of DoT in the game. Also, like the Mimic Tear, she too can heal herself, making her much more powerful. 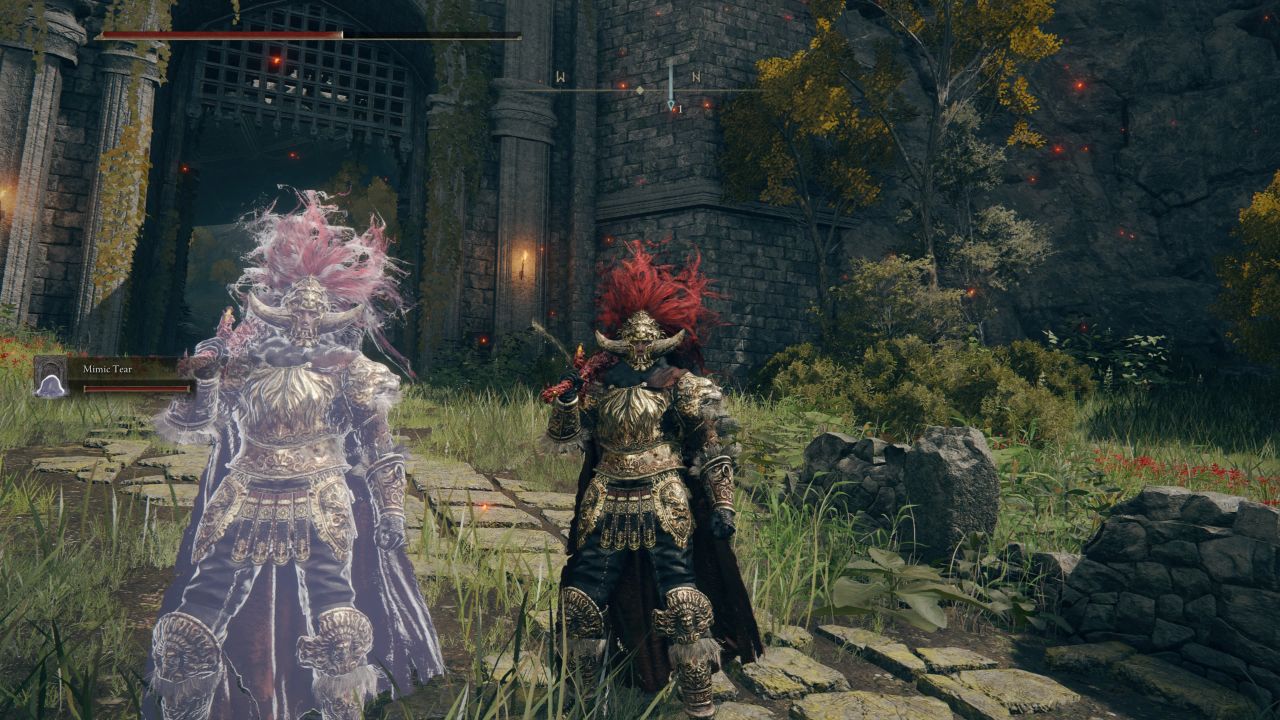 While the Mimic Tear isn’t what it once was in the Vanilla build of Elden Ring, it can still do some crazy damage. This thing copies the build you have, giving you essentially double the damage output for a short period. If you focus heavily on FP-based attacks like from a sorcery build, it has infinite FP. You can’t quite cheese the entire roster before the first major patch, but it can still help turn the tide in battle. Even in the current meta, the Mimic Tear is still considered to be one of the best Spirit Ashes in Elden Ring.