No matter how you place these Naruto stories, you can't go wrong if you watch them all. Naruto and Naruto Shippuden have collectively amassed some amazing arcs showcasing its titular protagonist’s and his friends’ highs and lows.  It starts in earnest as Naruto Uzumaki embarks on his path as a trainee ninja, but he quickly picks up steam when he realizes his latent potential.  The arcs turn from individual missions with the lives of himself and his comrades at stake to battling existential threats to him and other Jinchuriki like Naruto, to outright thwarting disaster for his home and all the 5 Great Shinobi Countries.  Some of the best arcs are among Naruto’s biggest victories or defeats, while others put his exceptional supporting cast in the spotlight.  Here’s our list of the Best Naruto Arcs, Ranked.

For concision and removing nonessential content, fill arcs will not be counted, and this will not include the Boruto series since that is still ongoing.  The list goes as follows: As part of a nefarious plot by Sunagakure (Village Hidden in the Sand) and Otogakure (Village Hidden in the Sound) against Konohagakure (Village Hidden in the Leaves, Naruto’s home), Orochimaru plots to use this as an attempt for a joint attack on the village responsible for diverting funds and missions to itself.  His machinations were largely for his reasons, however, as he used this to act on a personal vendetta against the village’s 3rd Hokage, which he achieved.  Also featured here is the first large-scale confrontation between Naruto and a rampaging Tailed-Beast, Shukaku, left to run amok by a completely unhinged Gaara.  The results of this arc leave a ripple effect but lead to healing ties between Konoha and Sunagakure over time. There’s a variety of important developments that take place in this arc, such as the introduction of Kisame and Itachi; finding the new Hokage, Tsunade, after the death of the 3rd Hokage; Naruto learning the iconic Rasengan; and the confrontation of the Sannin, 3 shinobi originally trained by none other than the 3rd Hokage himself, Hiruzen Sarutobi.  The arc features some great moments like Naruto defeating Kabuto in single combat, Sasuke confronting Itachi, and 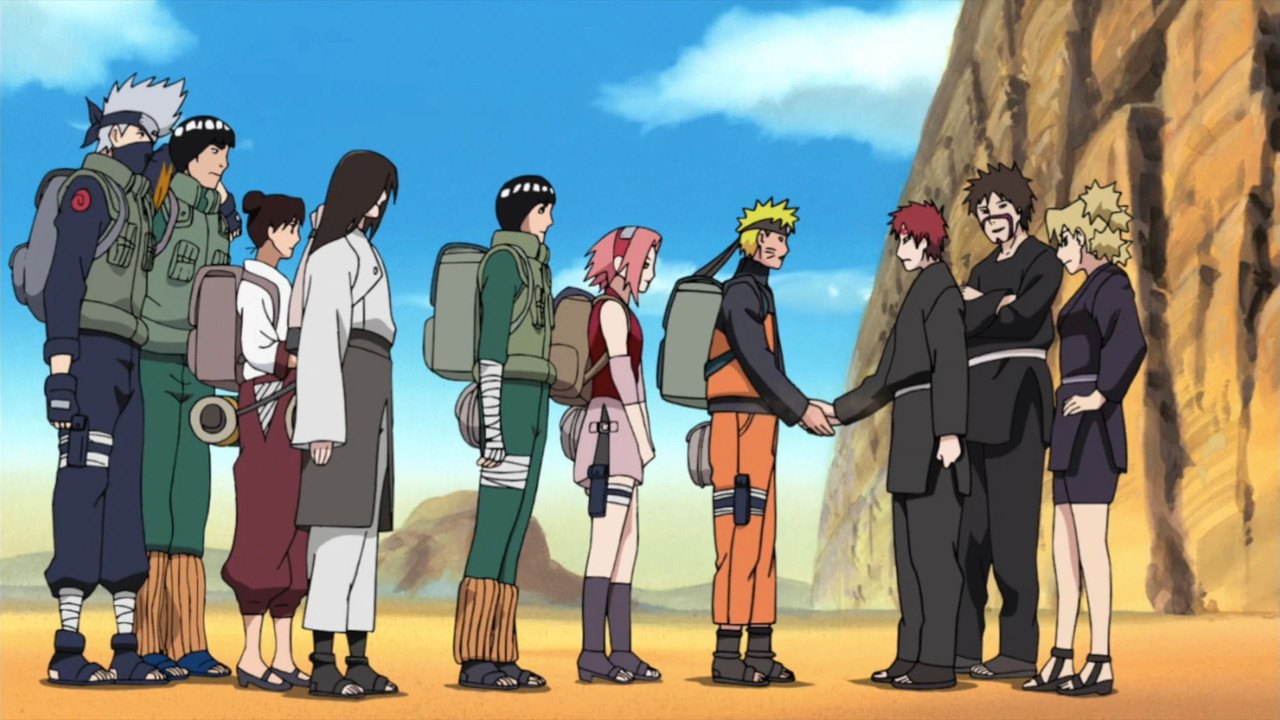 In the first major arc of Shippuden, Naruto has returned to Konoha with a slew of new abilities and a greater mastery of his particular skill set as a ninja.  While still not having fully realized his potential, he’s demonstrated his worth as a defender of Konohagakure and has prepared himself against the existential threat to him and other Jinchuriki posed by the villainous syndicate, Akatsuki.  The group, however, ends up targeting Gaara, who is the new Kazekage, and in their efforts, they nearly accomplish their mission, with some excellent turns by Sasori and Deidara.  Particularly great moments include Sakura proving to be a heavy-hitting asset against Sasori, and Naruto saving Gaara’s life, bonding them even more deeply. 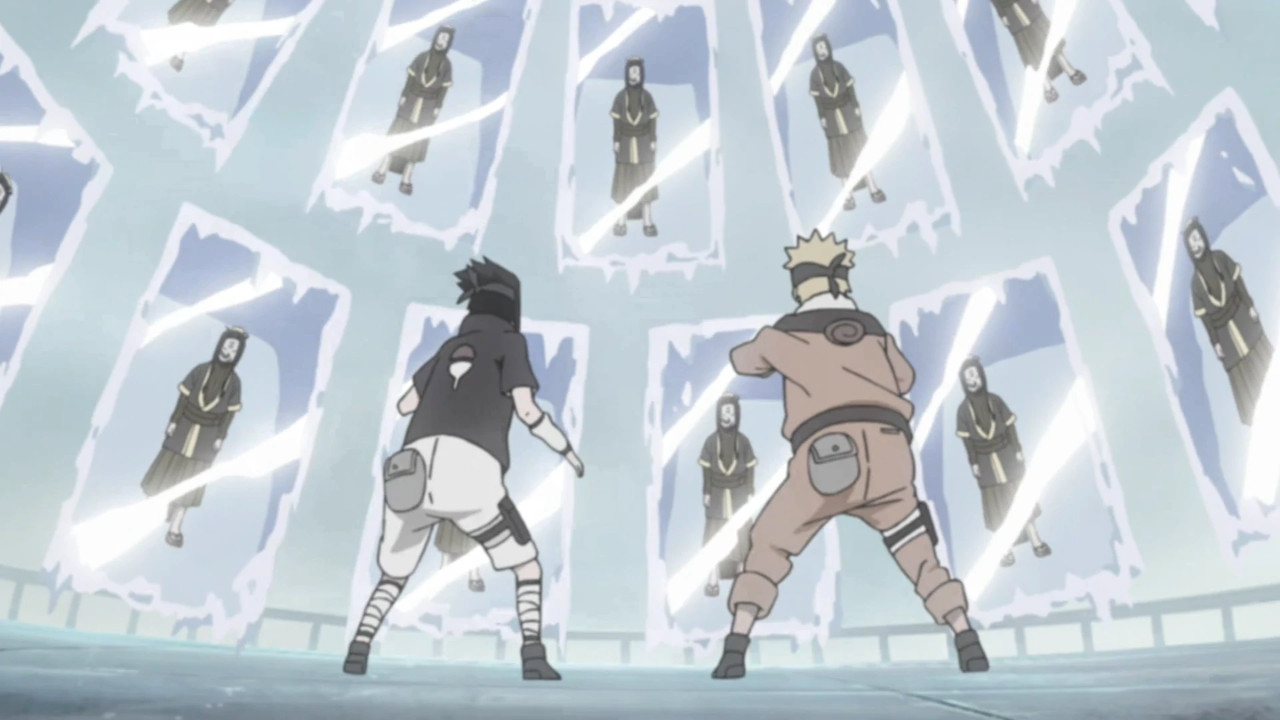 The first major arc in Naruto sees Team 7 having to learn teamwork, displays Naruto’s rivalry with Sasuke resulting in productive output where they push each other’s limits, and some incredible fight scenes as well as numerous brushes with death for the entire team.  They meet their first truly dangerous opponents, Zabuza Momochi and Haku, and take on their first truly difficult mission as genin.

Kakashi, a fan favorite, got to demonstrate his deadly abilities as the Copy Ninja of Konoha, and we got to see the first instance of how creator Kishimoto could quickly shift even the most dastardly, menacing foes into sympathetic ones with changes as subtle as revealing their full faces, with some surprisingly tender moments.  It was also here that Naruto first unleashed a fraction of his latent power. The strongest point of the Chunin Exams was easy that Naruto’s supporting cast got a good degree of focus, and their particular talents were put on display.  We got to see Shikamaru’s gifts for a strategy on display like never before, being the first of many; Sakura took on a greater role, wanting to step out from her teammates’ shadows; and entirely new characters were introduced, such as the memorable Rock Lee, the Hyuga family, and shinobi from the Village Hidden in the Sand, Sunagakure.  We got to see Kishimoto’s creative display of ninja prowess, and a dramatic shift of Team 7’s status quo, with Sasuke, finally bearing proper witness to Naruto’s vast potential for raw power and tenacity. While there’s a lot that goes on in this particularly huge Naruto arc, which on occasion might drag on, the biggest highlights include the climactic confrontation between Kakashi and Obito, as well as the fights against Madara Uchiha and the Ten-Tailed Beast.  Through sheer force of wit the heroes prevail, despite incredibly fearsome foes with some utterly insane abilities (Kakashi’s answer to Obito’s evasion is particularly clever) – and we get to see an incredible fight put up by Might Guy against Madara, unleashing the full potential of the Eight Inner Gates, nearly killing the legend himself.  Finally, we see a reunion of Team 7 in this, coming up to the end of the series, and it’s wonderful. While the characters have certainly had their lives threatened in numerous instances, this story was the first instance in which key characters came dangerously close to dying in single combat with some ruthless shinobi, the Sound Four.  In an ill-fated attempt to stop Sasuke from joining up with Orochimaru and abandoning Konoha, Shikamaru assembles Neji Hyuga, Kiba Inuzuka, Choji Akamichi, and Rock Lee, and is joined by the Sand shinobi Gaara, Temari, and Kankuro later on.  They triumph over their foes in numerous deadly close calls, while Sasuke ponders the rift that’s growing between himself and his comrades, namely Naruto, who is proving to develop at a much greater rate than Sasuke.

Humiliated by his earlier defeat by Itachi, Sasuke learned that the way he could awaken his Mangekyo Sharingan eyes was to kill his best friend, who he alleged was Naruto in this case.  His motivation was dark, and it resulted in Naruto’s most harrowing challenge yet, a fight for his life while also trying to spare the life of his rival, and it results in Sasuke leaving Konoha with the intention of never coming back, setting in motion the events of Shippuden.  It was, for many characters including Naruto and Shikamaru, perhaps their greatest failure, from which they would take years to fully bounce back. This arc single-handedly wins itself a top spot in this list for its use of spectacular visuals while also outlining the fascinating and tragic backstory of the Uchiha clan.  Sasuke, Naruto’s longtime ultimate rival, confronts his brother, Itachi, in a fight where they put on display both of their incredible talents for powerful offensive Ninjutsu and deadly illusive Genjutsu.  It also produces some of the most iconic still shots in any anime and is quite the nail-biter in terms of violent intensity.  The arc ultimately concludes with Sasuke achieving one of his fundamental personal missions, but it begs the question, was this pursuit in vain? 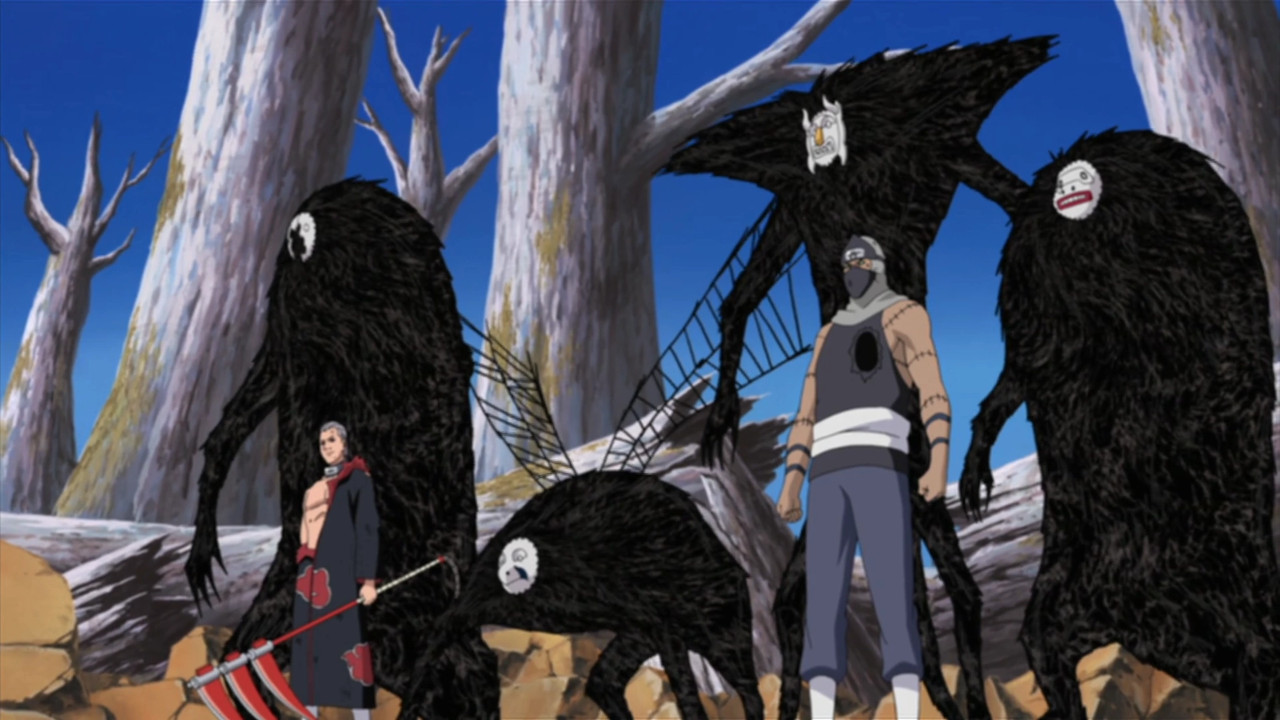 This story, while not having the highest stakes in the series, nevertheless encapsulated two central characters and fully displayed their strengths and tactics.  On one hand, Naruto surpasses his limits in an even greater fashion than before, unlocking new potential with his chakra while facing a new, deadly foe in Kakuzu.  On the other, Shikamaru Nara, who has emerged as a dark horse as a prodigiously talented shinobi and leader, wrestles with the loss of his leader and mentor, Asuma Sarutobi, and encounters more or less of a coming of age in the process when fighting his opponent, the cruel Hidan.

Both of their opponents are Akatsuki with wildly varying temperaments – Kakuzu’s being a more measured persona, while Hidan is manic, confident to a fault in his apparent immortality.  While it’s neat to see Naruto learn a new, devastating variation on his signature Rasengan, all eyes were glued to Shikamaru the moment he broke down in front of his father while attempting to cope with the loss of Asuma, slain by Hidan.  His brilliant combat prowess made for an incredible viewing experience, seeing him consistently outwit his targets, and encounter a solemn catharsis when he achieves the victory he sets out for.  This foreshadows his later role as Naruto’s right-hand man and is a ferocious display of emotion and action. There could be no other choice for the top spot.  This was the emotional culmination of Naruto’s original journey from being an outcast, the class clown, into his home’s ultimate savior, bringing Konoha back from absolute, merciless ruin at the hands of Pain, the most powerful adversary he’d faced to this day.  In this story we saw Naruto avenge the loss of his mentor, Jiraiya, confront his demons in a literal and figurative sense, as well as encounter his concealed past.  We see him wrestle with the truth behind why his father sealed Kurama inside of him, seemingly dooming him to a fate of forever being pursued and a social pariah, but ultimately empowered, for the first time meeting someone who, from the very beginning, had undying faith in him.

In a way, this arc encapsulates the most significant conclusion to Naruto’s character arc and was it not for the high-concept plot still very much in motion and loose ends revolving around Sasuke, Obito, and the rest of the story, this could have been made into the end of the series.  Naruto’s arrival on the scene produces excited cheers, and the moment Pain pushes him too far by trying to cut down a loved one, seeing him almost lose himself entirely was hard to watch.  It’s an emotional, heartwrenching portrayal of the protagonist embracing who he is, and when he is carried on the shoulders of the village that once rejected him, there’s not a dry eye in the house.

This concludes our list of the 10 Best Naruto Arcs, Ranked.  It’s genuinely difficult to list these, as so many others are memorable in their own right, but these were undeniably among the best.  Be sure to check out more anime coverage in our entertainment column, including other Naruto content like this!

Attack of the Fanboy / Entertainment / The 10 Best Naruto Arcs, Ranked