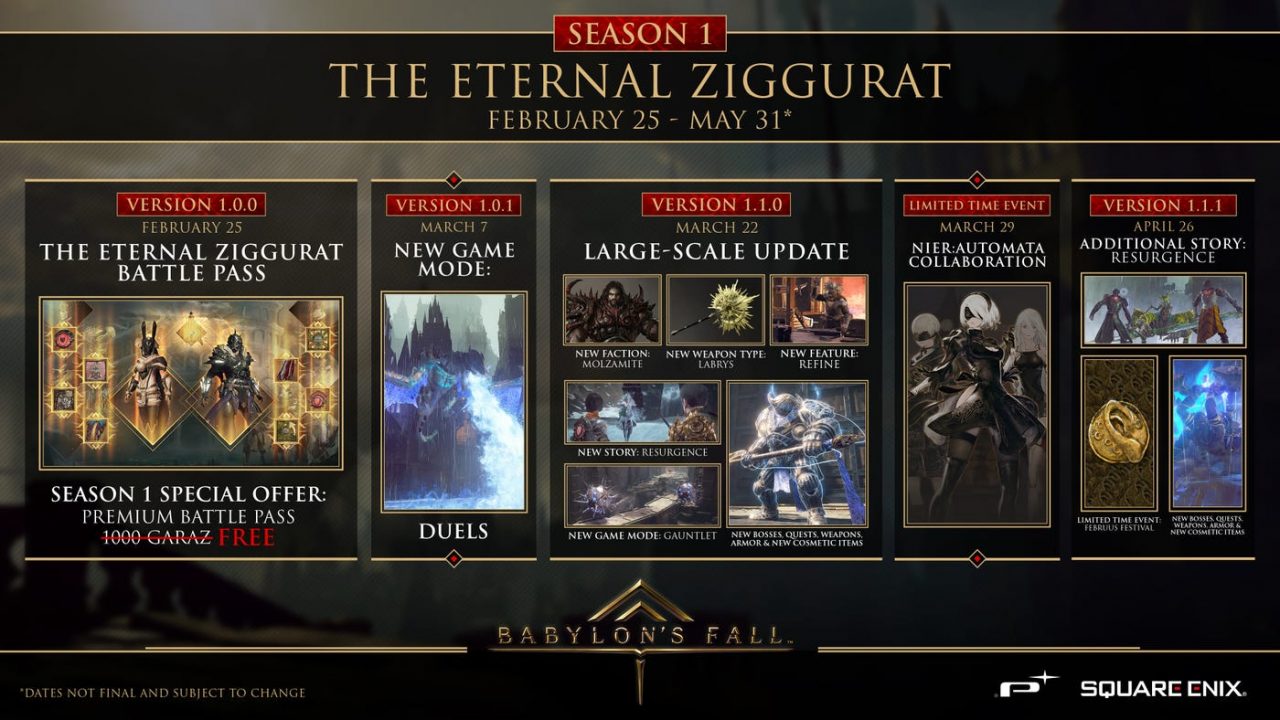 Babylon’s Fall, the new live service game from Square Enix and Platinum Games, seems to have quite a bit of content on the way. The two gaming giants have laid out a path for all new things coming out soon, and it’ll be great to see what is coming to the already content-packed game.

However, what do all of these things mean? Thankfully we are here to help out with that! Follow our guide to learn what all of the new content will look like when it comes your way.

Babylon’s Fall Season 1 – What Does It Entail?

Starting things off on a positive foot, Babylon’s Fall’s Season 1 Battle Pass will be free for all players, giving them a taste of the new content that will be coming to the new Live-Service game. If you’re unfamiliar with the premise of a Live Service game, it is a game that is continuously updated with new content, keeping things fresh for all players involved.

The first thing coming to the game is the New Game Mode – Duels, which is essentially a Hard Mode Boss Fight mode, that lets you take on extremely hard enemies by yourself or with friends to claim excellent rewards and items that you wouldn’t be able to obtain normally in-game.

March 22nd looks to bring the second new content update, with they have titled as the Large Scale Update. There will be new factions, weapons, features, game modes, story content, and enemies that will be coming your way. Rather than having a paid expansion, story content will be added regularly, allowing players to learn more about the world and story of Babylon’s Fall, which is exciting to see.

Coming on March 29th is the NieR: Automata Collaboration, which will allow players to bring 2B and the gang to the world of Babylon’s Fall. Bringing cosmetics, items, weapons, and worlds from the popular Action RPG is exciting to see, and it will great to see if they bring more Collaborations in the future.

The last update that is coming alongside this Season 1 Battle Pass is an additional story titled Resurgence, which also offers limited-time events and new bosses, quests, weapons, and cosmetics.

It’s exciting to see what Square Enix and Platinum games have in store for us, as the world is already full of content, so having more at no additional cost is a great option. Let’s hope that the Seasons continue to grow from here, bringing new collaborations and more to the table.