Getting to the top as quickly as you can. In order to make any progress in Pokemon Brilliant Diamond and Shinning Pearl, you will need to level up your Pokemon. Having higher-level Pokemon will let you easily take on any gym that stands in your way and is necessary for taking on the Pokemon League. Once you start making progress, you can go get the HM Fly to speed up getting around.  Leveling up Pokemon in Brilliant Diamond and Shinning Pearl is a bit different than previous entries in the Pokemon series. In battles, all Pokemon in your party will gain XP, even if they didn’t fight. With that, it seems like leveling Pokemon is easy, but there is a slight catch to it. We will cover these changes and the best way to get XP in this guide.

How to level up quickly

If all the Pokemon in your party gain XP, then leveling up is simple. Just slap your best Pokemon in your starter slot and you should be golden to run around in tall grass until you need to heal up. While this will work it is not the most efficient method. Even though all Pokemon in your party gain XP, the XP gains are not equal across all Pokemon. As you can see in the picture below one of my Pokemon only got 15 XP while all the others got over 20. That’s because that Pokemon did not participate in the battle and is at a higher level than the Pokemon I fought. 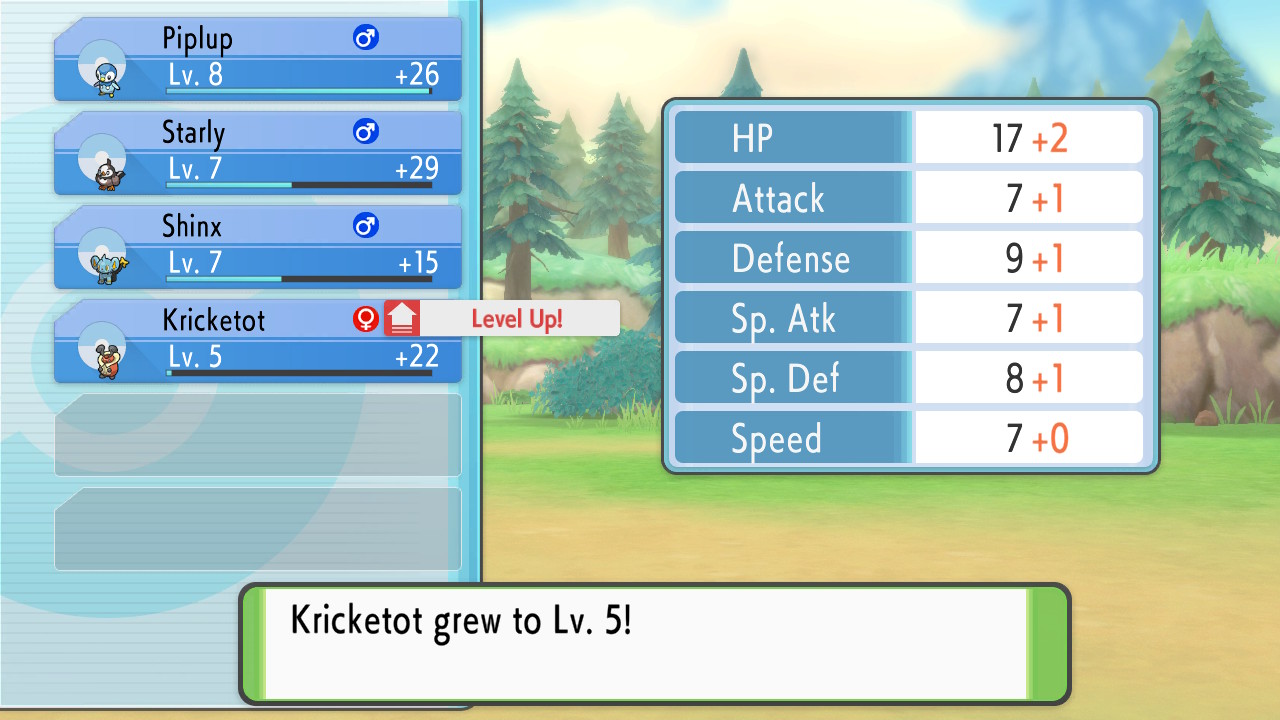 In order to get the most XP out of a battle, you will need to do switch leveling.  What that means is that you will need to put whatever Pokemon you want to gain the most XP as your starter. Once in a battle, you will switch to your strongest Pokemon and win the battle. In the case of the above screenshot, I had Starly go into battle first and then switched to my Piplup to actually fight the battle. Starly got the most XP because it was a lower level than my Piplup and it was used in battle even though it didn’t attack.

To grind even more efficiently you can have lower-level Pokemon in your party while you use the switch leveling method. Since the Kriketot was level 4 going into the battle it gained more XP than the Shinx even though it never left my bag. This way you can level up Pokemon you may need later in the game and have them be at useable levels when they are needed. If you need any more help with the new Pokemon games make sure to check out our other guides.