Help your allies or sabotage your enemies. Bravely Default 2 houses a world full of mythical beasts, mystical areas, quirky characters and of course, Pictomancers that use art as a means of destroying enemies or supporting allies. If that sounds odd to you, that’s because it is. The Pictomancer Job is a very unique one, grasping its theme beautifully. Artists are supposed to be creative in nature, and Pictomancers are that and more, able to become any role you choose for them to be. In this guide, we will discussing about this weird kit of theirs, including what they can achieve in the field.

Don’t let a Pictomancer fool you with their supposedly timid nature and cute brushes. They are powerful wizards, able to tap into the mystical effects of their Artistry Command and either cause harmful effects to monsters, or help you fight your way through waves of enemies. 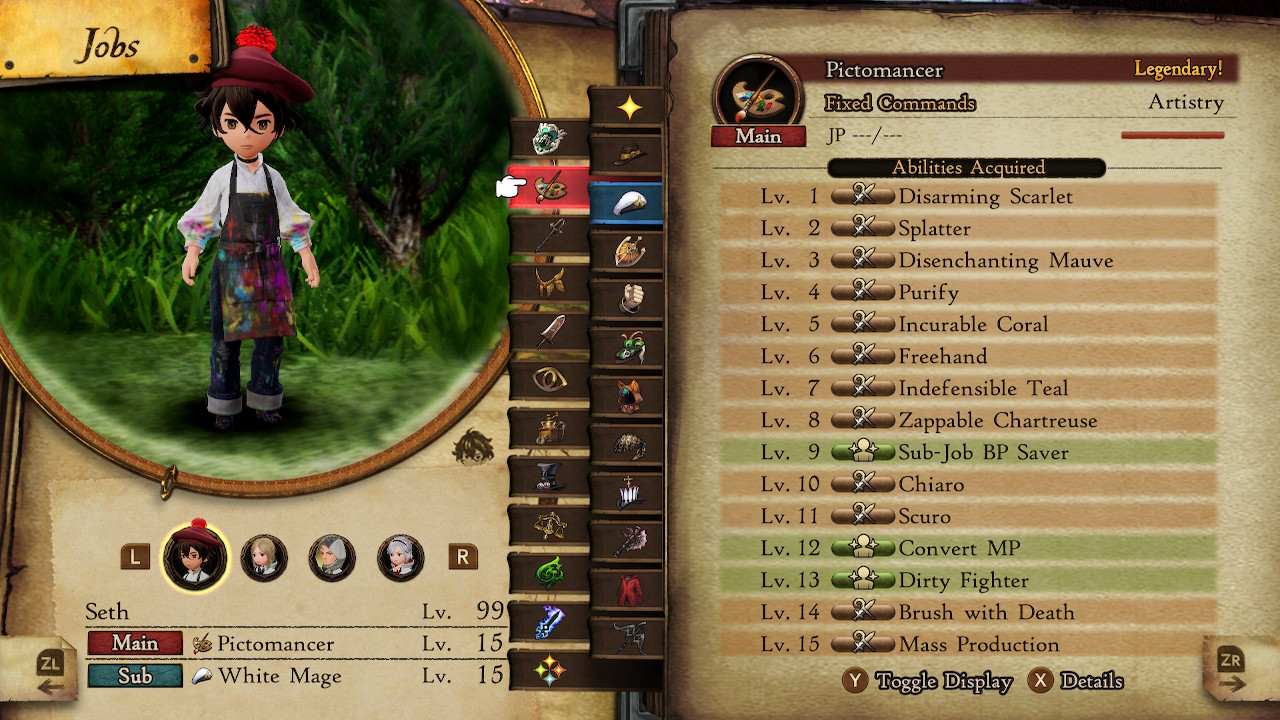 To start this guide, it is appropriate to say that Pictomancers are one of the most versatile Jobs in Bravely Default 2, that are also fun to use and play with. This is a little unfair, as it is clear not every Job in the game received the same treatment as this one. With very helpful abilities, excellent passives and having both the option of being an offensive presence, as well as a support pillar in the team, this is a class that can pretty much do everything.

Not only that, but Pictomancers can do very well in any type of combination with other Jobs. Main or sub-job, they bring enough to the table in both cases to consider themselves quite valuable in any team composition. If you decide using them offensively, they are the first Job in the game where you can access Light and Dark Skills. One of each element though, but they are enough to cover a lot of enemy weaknesses. Just a head’s up, if you decide having them as a sub-job, make sure to equip Spiritmaster’s passive ability, Sub-Job Speciality 1, to be able to have the effects of the Pictomancer’s Speciality I. Adn don’t forget their own great passive ability, Sub-Job BP Saver, that makes any skills from a sub-job to cost a BP less than normal. Yes, this can turn abilities that cost 1 BP, to a 0 cost move.

Where they shine the most though, is the great amount of debuffs they have, alongside their signature negative ailment they can cause, Daub. Pretty much being able to reduce an enemy’s defenses to dust, your whole team will start feeling stronger just from this debuff alone. Having their second Speciality active, this is further enhanced as it increases the turns the debuffs will remain active.

On top of all the goodies above, your Self-Expression ability is the reason why a Pictomancer can be so good at supporting themselves, and in result the whole team. Essentially, it reverses the negative effects of their skills whenever you target yourself, being able to increase your potential instead of hurting you. So what we have here, is a saboteur that can further enhance themselves to be even stronger as a battle progresses.

Lastly, if all of the above sounds good to you, I have one more treat to mention. Let me touch on the fact that Pictomancers have also access to an instant-death ability, after unlocking their level 15 potential, and their Mass Production skill lets them turn single-target spells to AOE. The boons this Job has increase by the minute, hence why I mentioned how interesting it is and how fun it is to use it in battle.

There you have it, this is all the basic knowledge you need to start experimenting with the Pictomancer Job, and hopefully this brief guide gave you some insight as to what their kit is capable of doing. Next, we will be analyzing the infamous Dragoons and all their great passive abilities.