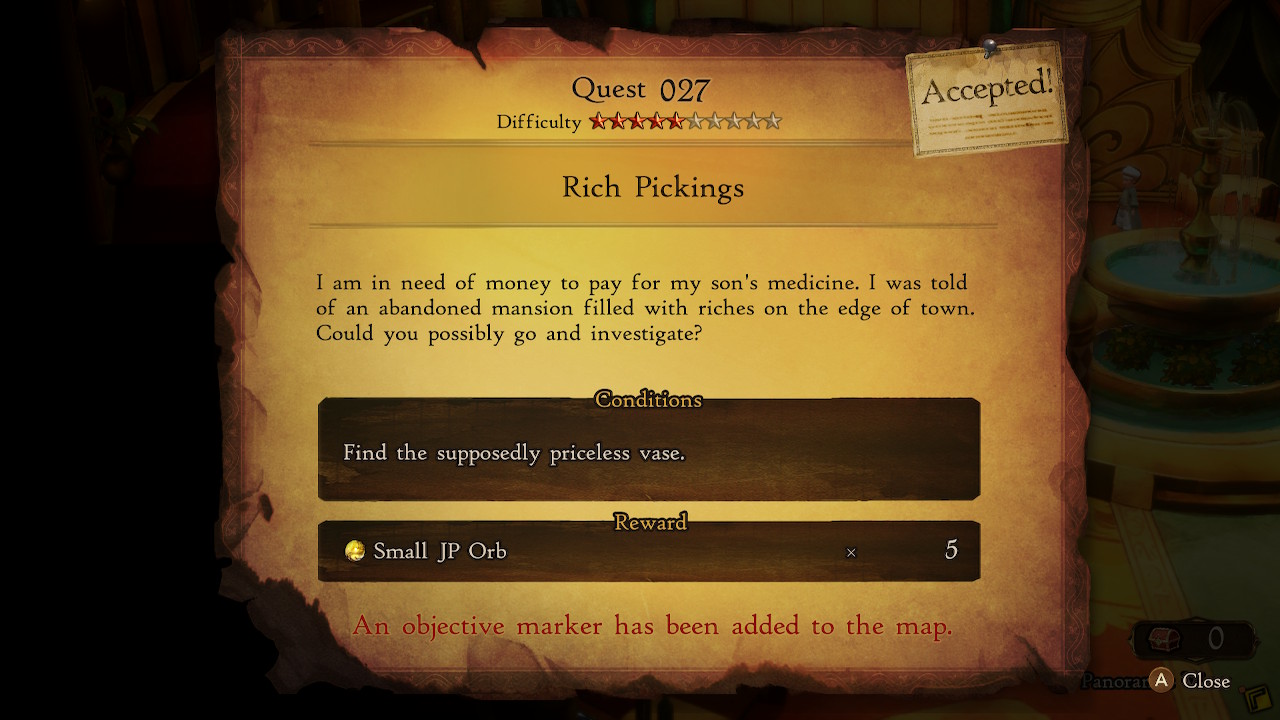 Rich Pickings in Bravely Default 2 features your first optional dungeon, and you’ll unlock it after clearing the final battle in Chapter 1. This side quest also features the return of Dag and Selene, the dubious mercenary duo from the start of the game.

Rich Pickings in Bravely Default 2 is a 5-star difficulty side quest, and you’ll earn 5x Small JP Orb for completing it. Head to Savalon and enter the Gaming Hall on the right of the map, then speak with the man on the left.

A cutscene will play, where he’ll tell you of an abandoned mansion filled with valuable treasure he could use to pay for his son’s medical expenses, but it’s filled with deadly monsters.

You’re not the only group he has told, however. The two mercenaries from the Prologue in Bravely Default 2 are also in pursuit of the treasures within the mansion, so you’ll have to beat them to the goods.

Once you have Rich Pickings head outside Savalon and venture to the northeastern portion of the map. If you face your camera north you’ll head up and right, around the oasis towards some cliffs. You should see the Abandoned Mansion in the upper-right of the minimap. 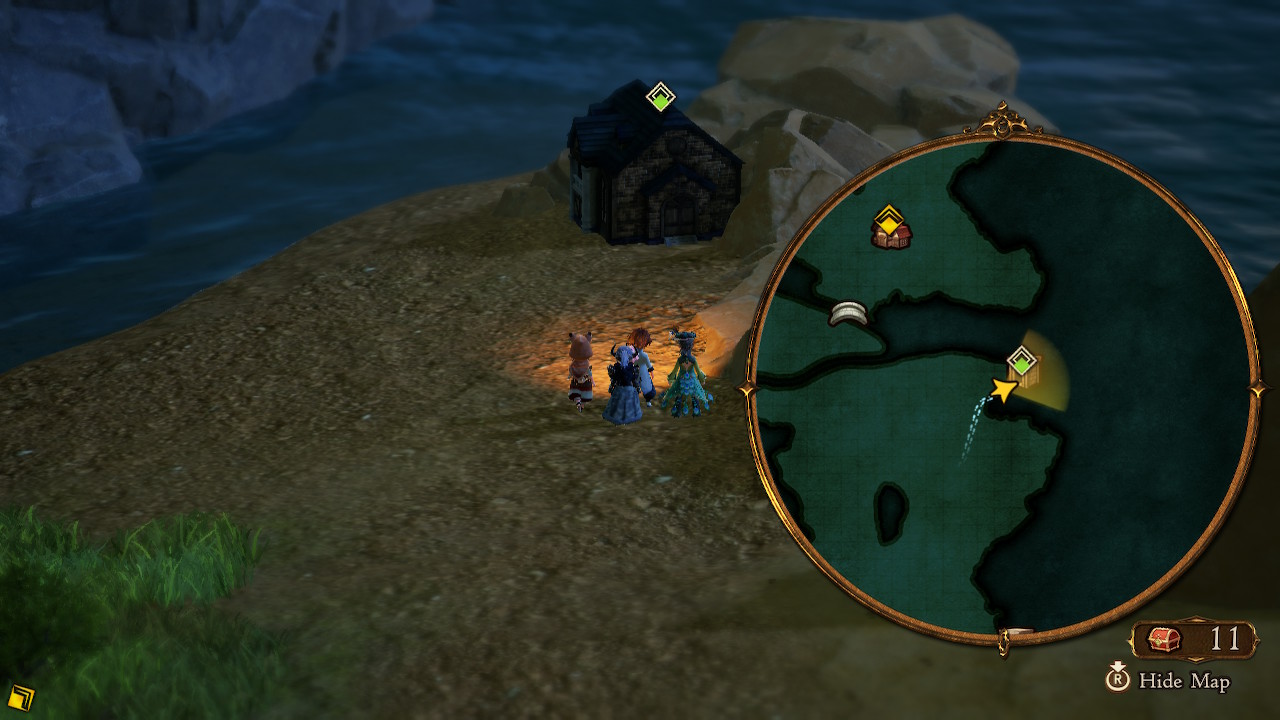 Enter and walk a way in to trigger a cutscene. Once it ends you’ll be free to explore the mansion for the treasure. There are a few actual chests to loot here, and there are plenty of monsters. Skip the monster and chest sections below if you want to simply get on with Rich Pickings in Bravely Default 2 (though the path the chests follow does lead you through the quest as well).

To continue Rich Pickings head up the stairs in the Foyer and into the central door on the middle floor. There are technically two chests on this middle floor, but one can’t be reached till later in the dungeon (like the two upstairs).

A chest not tied to the actual chest count will be marked for the quest. To reach the quest chest head left and around, picking your way through all the discarded furniture.

Looting the chest will trigger a cutscene, where it appears no one, including Dag and Selene, can find any treasure. Turns out either someone beat everyone to the punch, or something more nefarious is hoarding the goods.

Go up the stairs and work your way across the top floor while heading right and up. You’ll eventually reach another set of stairs leading back down. Once you load into the next floor head left and up into the top room and down another staircase.

There’s a save point here, so pop a tent and save your progress prior to entering the room and facing your next boss battle in Bravely Default 2. 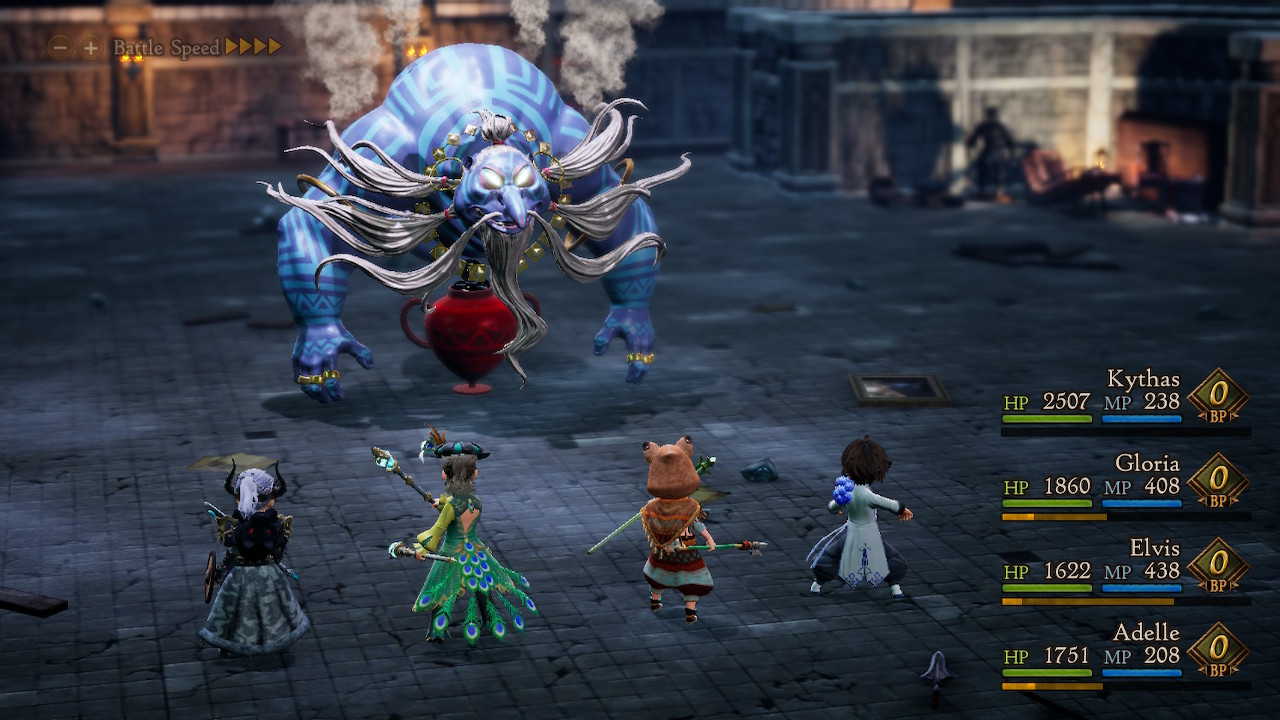 After you best the Amphora a cutscene will play, in which the team will realize the value of the vase they just smashed. Once it ends use the conveniently placed door in the rear to leave the Abandoned Mansion and return to town.

When you arrive back in Savalon go to the Gaming Hall and report back to the man, who will be dismayed to hear you had to smash the vase since there was a monster in it and all.

You’ll learn the other duo (Selene and Dag) gave the man a necklace to help the man pay for his son’s medical expenses. Turns out Dag has a bit of a heart after all. You’ll get your reward of five Small JP Orbs and Rich Pickings in Bravely Default 2 will come to a close.