Dominate the competition with this versatile STG44 build. The STG44 is a jack of all trades and the master of none, but that’s what makes it so favored; it’s versatile and can be used effectively in any situation. This is the best loadout we’ve found that takes advantage of the STG44’s flexibility: 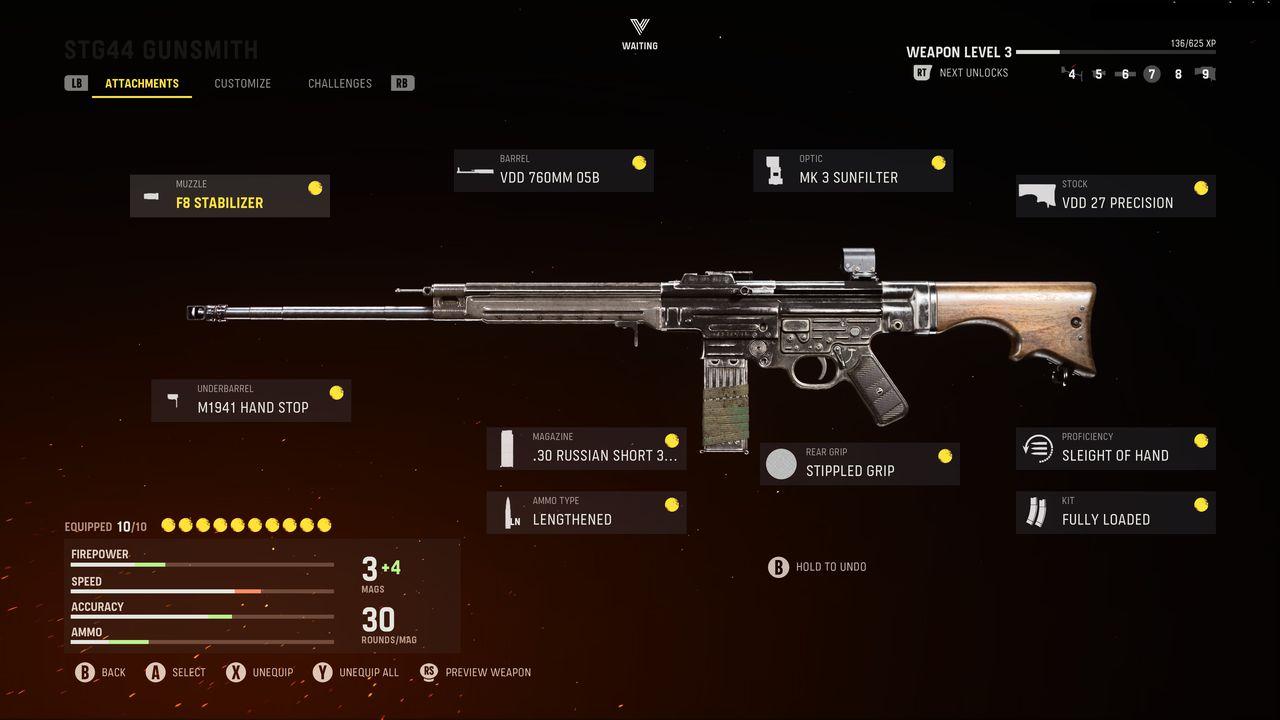 Like most weapons, the optic you prefer is personal preference and mode-dependant. However, we found the Mk 3 Sunfilter to be the best all-round option for switching distances.

The F8 Stabilizer is a muzzle you’ll be seeing often across loadouts. It improves accuracy and damage range, with the tradeoff of a slightly lower sprint-to-fire speed and lower hip-fire accuracy.

Another bonus to accuracy, the VDD 760mm 05b boosts precision and control, reduces scope sway & gun bob and increases damage range. Similarly to the F8 Stabilizer, this barrel also reduces sprint-to-fire speed and hip-fire accuracy, as well as slowing down how fast you walk while aiming down sights.

Don’t worry too much bout these impediments, as the rest of the loadout attenuates them quite well.

m1941 Hand Stop is an excellent choice for an Underbarrel, due to its accuracy and recoil control bonuses. The only tradeoff is hip-fire accuracy, which you won’t be doing much of with the STG44.

For your magazine choice, .30 Russian Short 30 Round Mags is your best choice. It improves TTK (time to kill) by increasing damage and its drop-offs are compensated by the rest of the loadout.

Choosing a Stippled Grip aids your initial accuracy and recoil, which is essential when using a weapon and loadout with a fast TTK. The better you can aim straight away, the more chance you have to kill your opponent first.

VDD 27 Precision will increase your recoil control significantly and also makes up for the ADS lost from other attachments. You can run without a stock if you prefer movement speed to recoil control.

Lengthened ammo buffs bullet velocity. The faster the bullets reach the enemy; the faster they die. These sound like very minor things but can make the difference between killing and dying, especially when combined with synergetic attachments like the .30 Russian Short 30 Round Mags.

Sleight of Hand improves your reload time between kills, so you can quickly move on to the next.

Fully Loaded is a good kit to choose to ensure you don’t have to reload and can rack up multi-kills at the start of every respawn. You can safely choose Surplus instead if you just care about grinding XP.

The Machine Pistol is a solid choice for a secondary weapon to use as a backup, or at close range. Its insanely fast fire speed can get you out of tough spots.

Your lethal grenade will depend on the game mode, but the Throwing Knife is effective at quickly and silently killing enemies in all modes. MK2 Frag Grenade and Gammon Bomb can be good for clearing out rooms of enemies tightly packed together, while the other lethal items can also be great at controlling areas. There’s ultimately no wrong choice here.

Stim may not be as powerful as in previous iterations of Call of Duty, but still a go-to for an assault rifle build. It allows you to get straight back into the action and wrack up kills without having to wait for recovery. With the STG44’s TTK, it’d be a waste having to rest. 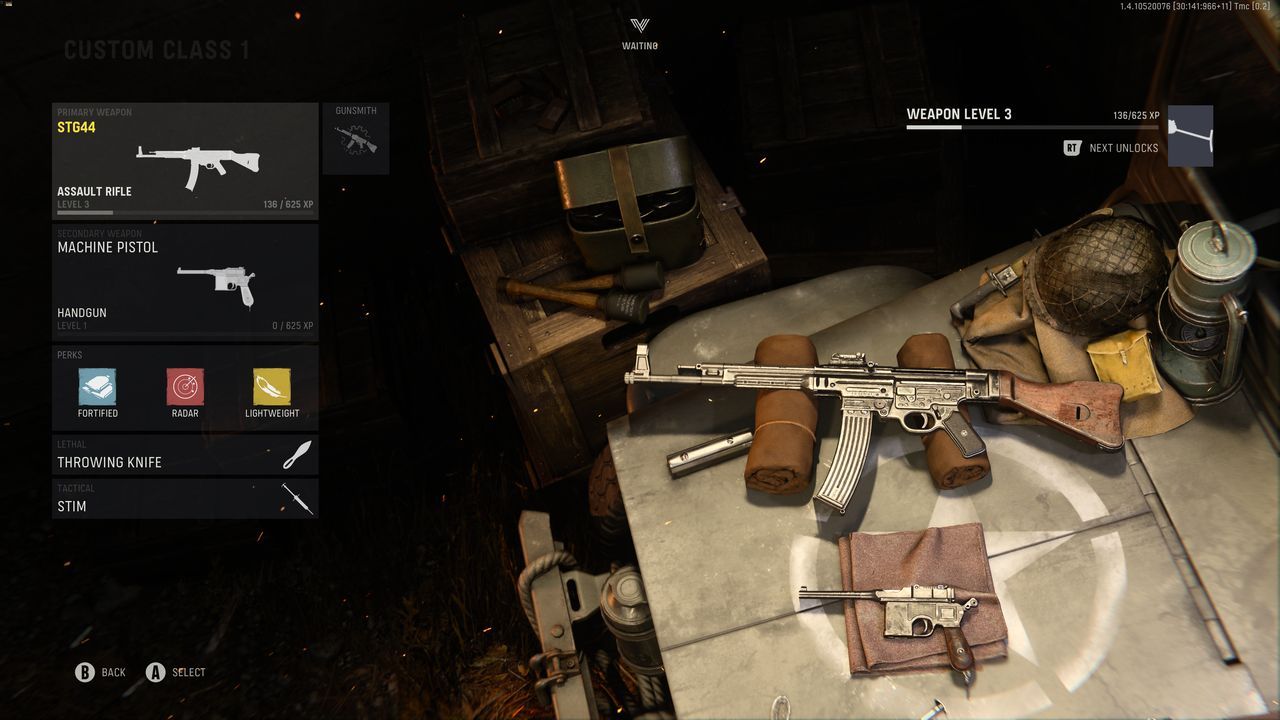 All perks in the ‘Perk 1’ category are useful and completely situational, but we found Ghost to be a good all-rounder. It can protect you from early-game killstreaks, so you can safely build up your own. Ninja can also be a great perk for sneaky kills and map movement.

Tracker is an incredibly useful perk. Not only can you track enemies with the footprint trail they leave behind, but death markers of enemies you kill are completely hidden to the enemy team. With no death markers left behind, enemies are much less likely to expect you, making kills that much easier. Especially with how fast the STG44 can mow down opponents caught off-guard. Radar can also be useful for situational awareness if that’s something you prefer.

Since the attachments in this build lose a lot of movement speed, Lightweight can amend that by providing a significant increase. Double Time can increase Tactical Sprint if you find yourself sprinting more than you walk.

Looking for a solid SMG? Check out ‘Call of Duty Vanguard: Best MP-40 Loadout‘. You can also find more useful guides on our Call of Duty: Vanguard tag page.