The latest news in the world of video games at Attack of the Fanboy
September 4th, 2018 by Jelani James Like in any JRPG, you’ll be spending most of your time in Dragon Quest XI: Echoes of an Elusive Age battling the forces of evil. And though an understanding of combat will be required, if you want to save the land of Erdrea in style, then you’re going to need to become acquainted with a feature known as the Character Builder.

What Is The Character Builder?

The Character Builder is a feature that you unlock early in the game that allows each character to learn new abilities outside the ones they gain by leveling up. Accessible via the Pause Menu under the Misc. tab, players will be able to use it to give each party member generic things such as new skills and passive abilities or more interesting ones such as a increased stat enhancement while in the Pep state and increasing the effectiveness of specific weapons.

How Does It Work?

Whenever a character levels up, they’re provided with a set amount of points (referred to in-game as Skill Points) that can be used to unlock any panel of their choosing so long as an adjacent one has also been unlocked (this number is increased to four in the case of mystery panels).

As such, you won’t be able to immediately unlock the most powerful abilities and skills from the get-go. Instead, you’ll need to steadily work your way up one of the trees on a character’s grid until you unlock a panel adjacent to the skill or ability you want.

No two grids are the same but they all follow the same trend:

As you’ll notice, some characters share the same trees as one another. However, don’t take that to mean that they’ll learn the same skills and abilities as one another by going down them. For instance, despite both Serena and Jade having a Spear Tree, Serena will never learn Lightning Thrust while Jade won’t learn the various parry and counter skills her counterpart does.

Is There Anything Else To Look Out For Or Avoid? 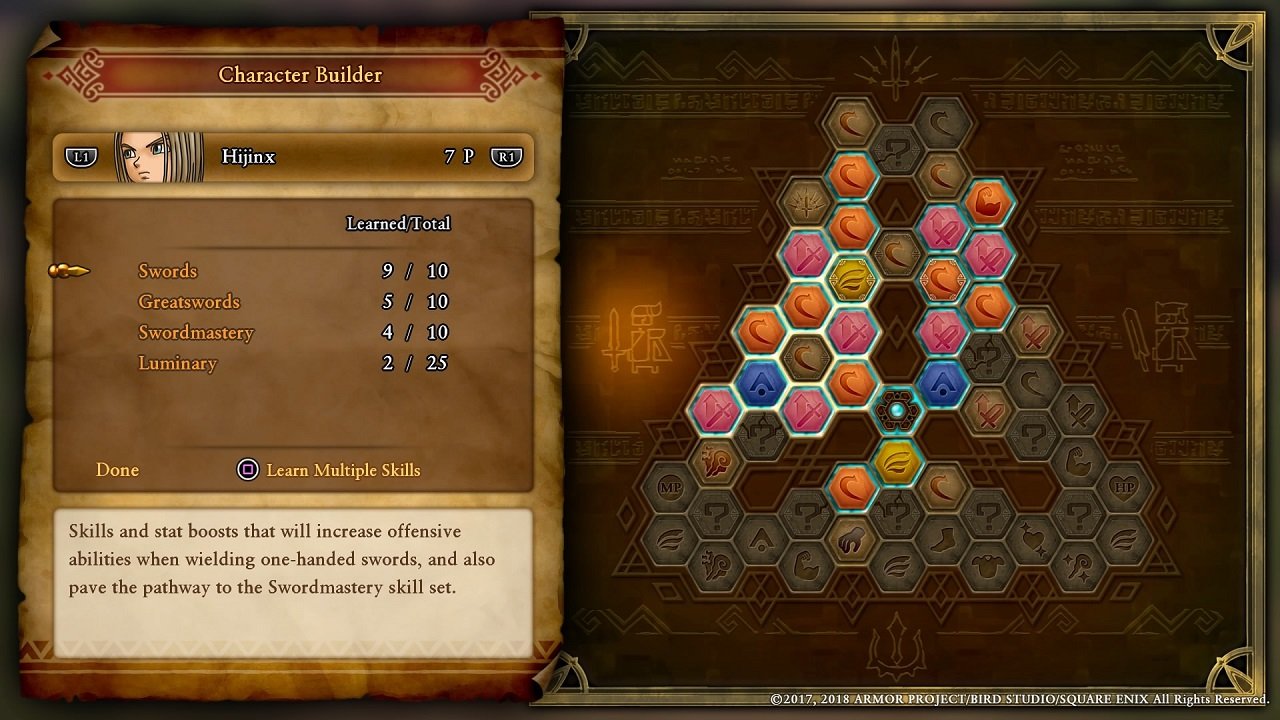 It’s worth mentioning that you can choose Rectification at a sacred statue or chapel to get a refund (progress on the whole tree is lost at a rate of 20 gold per skill point) if you pick up something that you don’t like, but indeed there are.

First of all, it’s highly recommended that you start by focusing on a weapon and unique tree. Feel free to choose multiple weapon trees if you wish, but do know that if a skill is found on a specific weapon tree, then it can only be used by the weapon in question. In fact, the same goes for weapon-unique passive abilities. On the other hand, there are no such restrictions placed on unique trees, so those can be used to gain some strong abilities or stat boosts that benefit any build if you’re willing to experiment.

While on the subject of weapon trees, there are some that are worth avoiding altogether unless there’s a mystery panel separating it from another tree. To name one, Claws are a bad pick for Jade because she learns some incredible Spear skills and they’re next to useless for Rab because he’s a mage.

Furthermore, there are some panels that provide extra skill points upon unlocking them, but you have no way of knowing which ones they are until they’re actually unlocked. It’s a laborious process, but those at a decent level and have the time could benefit from refunding all their skill points and unlocking panels until they find one of the panels in question. You can simply return to the main menu if you don’t find it, and if you do, then you can refund your skill points to keep the newly acquired ones if they were gained from a panel that you didn’t need.

Lastly, you aren’t going to max out anyone’s Character Builder without heavy grinding so don’t worry about it until the end of the game.

That’s it for the Character Builder in Dragon Quest XI: Echoes of an Elusive Age. It’s a simple way to build the characters the way you like. It would have been cool to see more weapons like Fans, Hammers and Bows, but I think I can live with what we have.