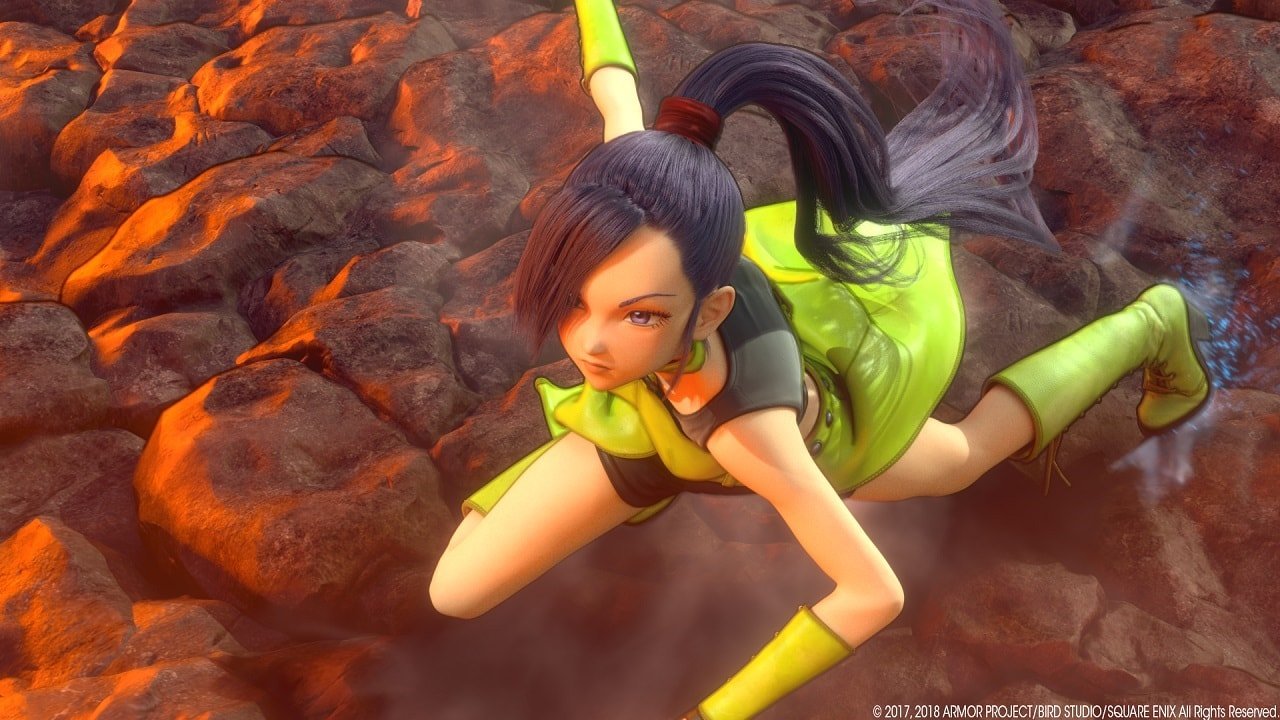 Jade is your traditional fighter-type character, boasting an impressive mix of HP, STR, AGI and DFT, allowing her to always deal solid damage. Granted, she won’t necessarily deal as much damage as Erik when he’s using Divide, but she’ll always be able to deal her damage consistently without needing to set anything up. If there is one area that she’s weak in, then it would be her MP — it’s the lowest in the game, making repeated use of her most-damaging skills risky unless you’re near a campsite, have MP restoration items or let Rab use M-Pathy.

In short, she’s a very consistent physical attacker, but her MP expenditure can prove to be her undoing if left unchecked.

As you might expect from a fighter-type character, Jade has absolutely no spells to speak of — which is fine since her natural M.Mi and M.Me are both 0. Thankfully, the only non-Character Builder skill she has is the only one she needs: a self-buff, that, among other things, increases her attack, defense and resistance to status ailments. 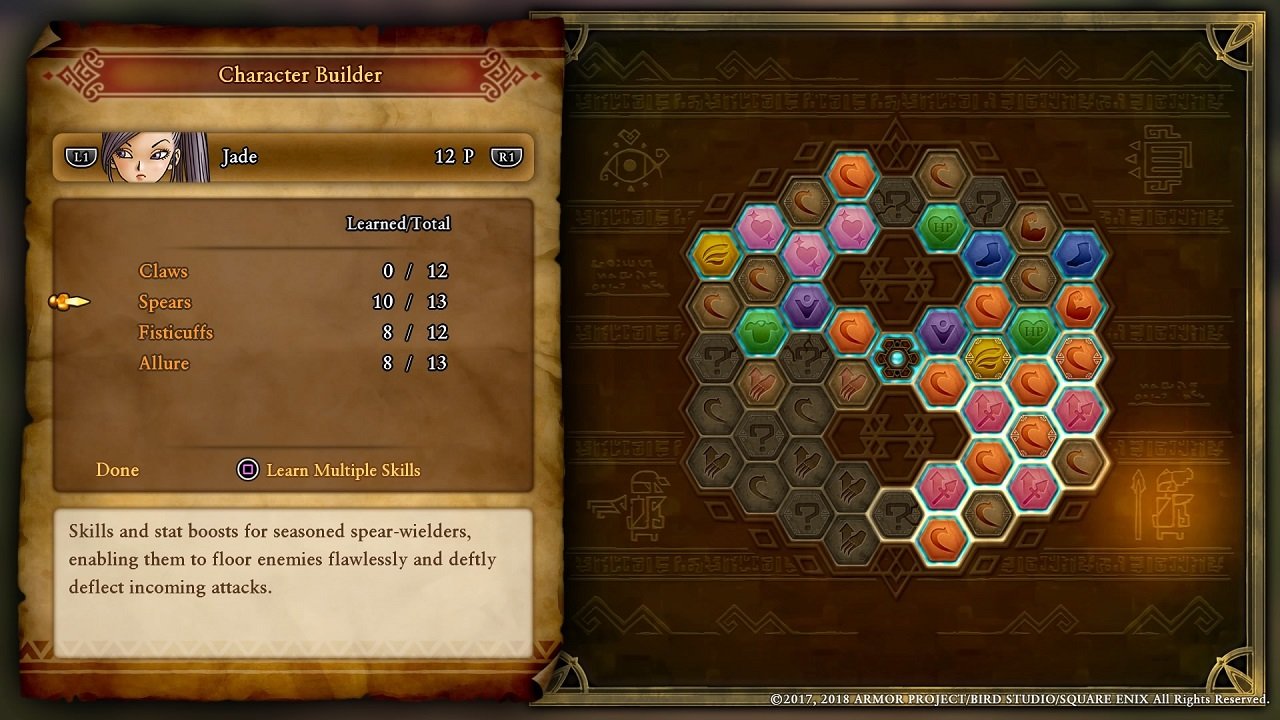 I’m not a big of fan of claws and though Jade’s stats and her Claw tree have a good synergy, I still can’t recommend investing in this tree first.

If you do choose to make this Jade’s weapon of choice, then Air Raiser (single target, wind-elemental damage), Can Opener (effective against machines), Hard Claw (three-hit attack on a single target) and Crone’s Claw (double strength attack that steals MP) are the skills to look out for.

And of course, go after the various passive effects to boost her self-healing ability and damage.

As for why I don’t recommend this tree? Because Jade’s Spears tree is legit.

Spears are where it’s at, even if the passive abilities are inferior to Serena’s version.

If you’re looking for raw single-target damage, then you could do far worse than picking up Crushed Ice (four-hit, ice-elemental attack on a single target) and Multithrust (four-hit, multi-target attack). Simply choose your attack based on the resistance of the enemy you’re attacking.

Meanwhile, if you want to go for broke against high defense enemies (Machines, Metal Slimes, etc.), then Lightning Thrust will be very useful thanks to its ability to guarantee a critical hit when it connects. You might be tempted to skimp out on SP by choosing Thunder Thrust, which does the same thing but at a lower cost, but don’t: the accuracy is worse.

Lastly, Flashback is a skill that lowers Jade’s defense in exchange for guaranteed counterattacks over two turns, which may be of some use for those who like taking risks. The damage is certainly there, but it’s entirely dependent on whether the enemy decides to use a normal attack on her.

Jade doesn’t get as much out of her Fisticuffs tree as she does with Spears, but it has the benefit of being useful regardless of which weapon she’s using.

Aside from all of those passive bonuses (especially the Agility and HP +30), be sure to pick up Vacuum Smash (wind-elemental damage on a group) and Multifeet (seven-hit, multi-target attack). Both will find plenty of use and Multifeet has the added benefit of being highly effective against Metal Slimes if you’re not comfortable with using Lightning Thrust, as well as just being a strong attack that comes at a reasonable 10 MP cost.

I know what you’re thinking: “Why would Jade have any need for Allure when she’s a fighter?”

Well, the answer to that is simple: it’s surprisingly effective. Not only are some of these skills rather strong (maybe not as strong as Fisticuffs, though), but they also scale off of Charm (in terms of damage and status infliction rate) — the one stat that Jade eclipses everyone else in before equipment comes into play and still shines in afterward.

Of particular note are: Femme Fatale (AOE attack that can steal the targets’ HP and has a chance to put enemies to sleep) and Pink Tornado (AOE wind-elemental damage with a chance to beguile). Just like with Fisticuffs, these can be used in conjunction with any of Jade’s weapons.

Finally, like always, be sure to pick up Pep-Up Power-Up when you get the chance.

That’s it for Jade’s role in Dragon Quest XI: Echoes of an Elusive Age. Though she has problems with MP management, she can easily tear through enemies if she’s not in a situation where that is a concern. And if brute force isn’t what’s required, she always has the option of applying a…feminine touch to the situation.