The Luminary has just about everything you would expect from a main character in a Dragon Quest game, not only boasting solid Health, Strength, Magical Might and Magical Mending, but the appropriate skills and abilities to make the most of them. His only weakness is that he takes a long time to develop. Do you want strong physical attack abilities? Well, you’re going to have to invest in several skills and abilities that you don’t need first. Want some high tier spells? That’s fine, but you aren’t getting both the offensive spells and healing spells in one go without a bit of extra work. Looking for some buffs or debuffs? Sorry, that was a trick question — he can’t learn those.

In short, he has everything you would want out of an MC and then some — just don’t expect it to come quickly or all at once.

A fairly standard showing as far as MCs go, with a healthy mix of offensive spells and support spells to go along with his physical skills he’ll learn from the Character Builder. He’ll also be able to strike at every elemental weakness after a later event, but said moment comes rather late in the game. 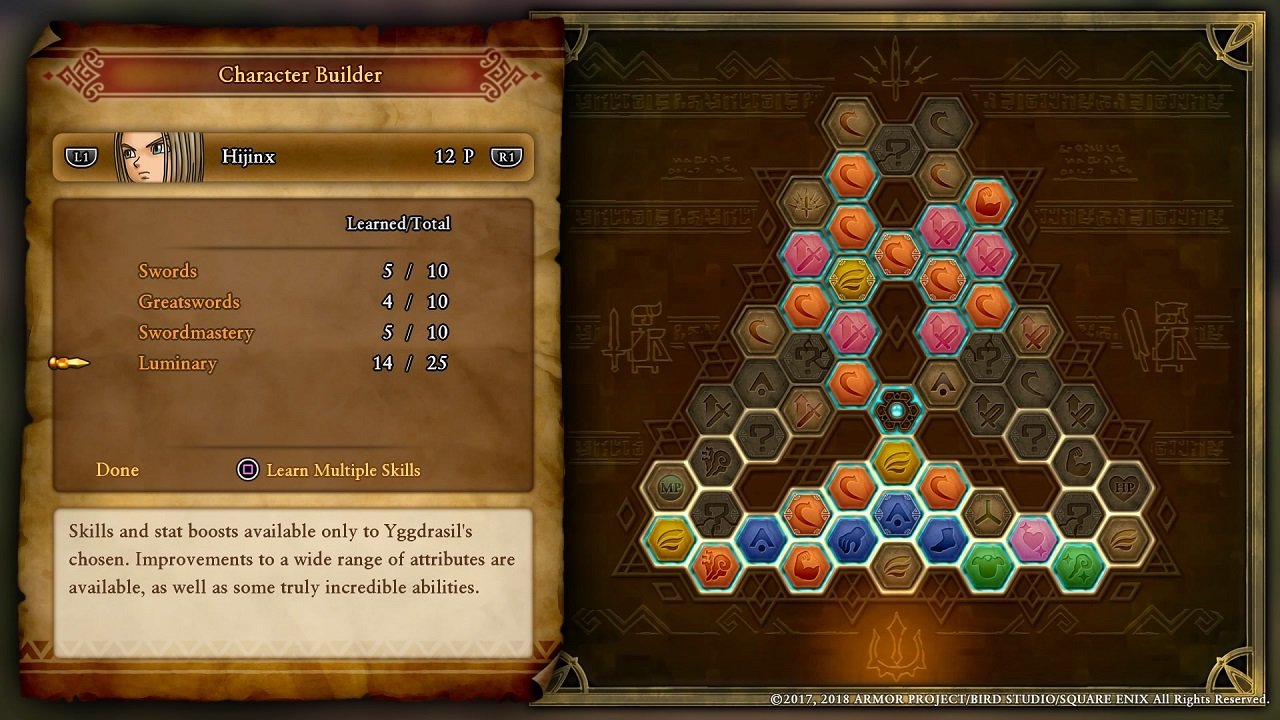 The sword tree isn’t impressive by any stretch of the imagination. Not only are its passive abilities somewhat weak and few in number, but the skills will start to show their age by the time you reach the fourth city (Level 20 or so).

That said, there are three major reasons why the MC will want to invest in it. First, his best physical skills requires them; second, it’s required to access the Swordmastery tree which has the skills in question; and lastly, his ultimate weapon is a sword, so the passive effects do spell benefit it.

Stick with it in the early game and you’ll be rewarded in the late. That’s it, really. The ability to use them with shields helps with survivability, at least.

Greatswords are fantastic in the early game, sporting high damage and useful skills at the expense of survivability (which isn’t that big of a deal since most enemies aren’t really dangerous at that point in the story). Really, the only reason why Greatswords start to fall out of favor is because Swords receive a huge spike in usefulness once you have enough SP to invest in the Swordmastery tree.

Regardless of whether you pick Swords or Greatswords, your goal is to invest enough SP in both their respective trees to get Sword Dance, a sword skill that allows the Luminary to attack a group of enemies four times or deal ~4x his normal damage to a single foe. Between the damage and low MP (8) cost, this skill will make using swords worth it — a sentiment that will surely be doubled down upon if you pick up Gigaslash which does damage to all enemies.

Before then, sword users should pick up Falcon Slash which is basically a half-strength, half-MP Sword Dance, whereas those sticking with Greatswords should invest in STR+25 (which will ultimately be useful regardless of your weapon) and Counter When Blocking/Parrying which pairs up nicely with the Greatsword Tree’s Greatsword Guard to allow the Luminary to deal damage even while on the defensive.

Investing in this tree is what will allow the Luminary to no longer solely be a melee powerhouse, but a competent healer (Fullheal, Omniheal) and spellcaster (Zap, Zapple, Kazap), as well. The only issue is that since you have to go to the left for offensive spells and to the right for recovery, it’s impossible to get all of them unless you have a large reserve of SP or neglected the Swordmastery tree. Fortunately, there’s a way around this: Rectification. If you enter the Luminary Tree from either the Sword or Greatsword tree, you can purchase the M.Mi+5 or STR+15 panels and then get a refund on your SP, allowing you easy access to both Kazap and Omniheal with a little extra SP to spare. The only downside is that this will also result in you losing access to Sword Dance if you already had it, so be sure to unlock the two stat boost nodes I mentioned before heading up to pick up your Swordmastery skills.

And aside from the many stat boost panels and Pep-Up Power-Up, which further boosts the stat gains granted by Pep and thus should always be purchased if you have the chance, there’s Pep Up, which allows the Luminary to enter Pep any time he wants. The Pep state might not last as long compared to when it is achieved through normal means and it’s quite expensive to cast early on, but the ability to use whatever Pep Power you like at nearly any time is broken. As an added bonus, the panel used to unlock it is easily accessible, so you don’t have to spend much SP to reach it.

That’s it for the Luminary’s role in Dragon Quest XI: Echoes of an Elusive Age. You don’t have to use him, but with everything he has (again, instant Pep) and the fact that it’s his quest, why wouldn’t you?

Need help with something else? Head to the Luminary’s Guide for more Dragon Quest XI guides.