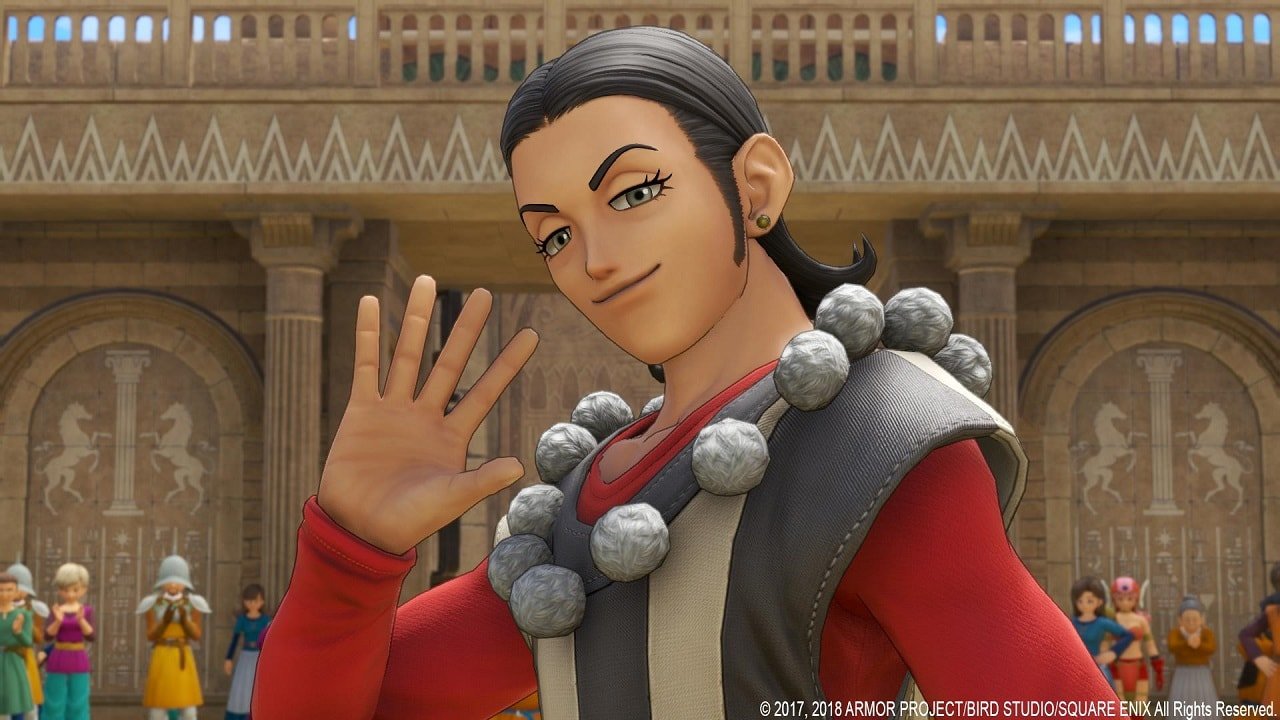 Sylvando is easily the most interesting character in this game from a mechanical perspective (he’s also great story-wise!). He has a little bit of everything, boasting basically every type of skill and has the stats to make fairly effective use of them. Unfortunately, he has two problems that prevent him from realizing his full potential:

Once everything gets rolling, though? As he says, Sylvando will take the stage.

In short, Sylvando will be an average, albeit versatile character for most of the game, but your patience will pay off if you’re willing to do Dragon Quest XI’s side content.

As you might have expected, Sylvando’s spell repertoire is all over the place. He can heal, buff, clear status effects, debuff and even deal damage with his multitude of spells. Though none of them are exception, his Oomph-line spells are noteworthy for making him the first character capable of buffing your team’s attack power. Now that I think about it, Sylvando will actually be responsible for a number of “team firsts”… you’ll see. 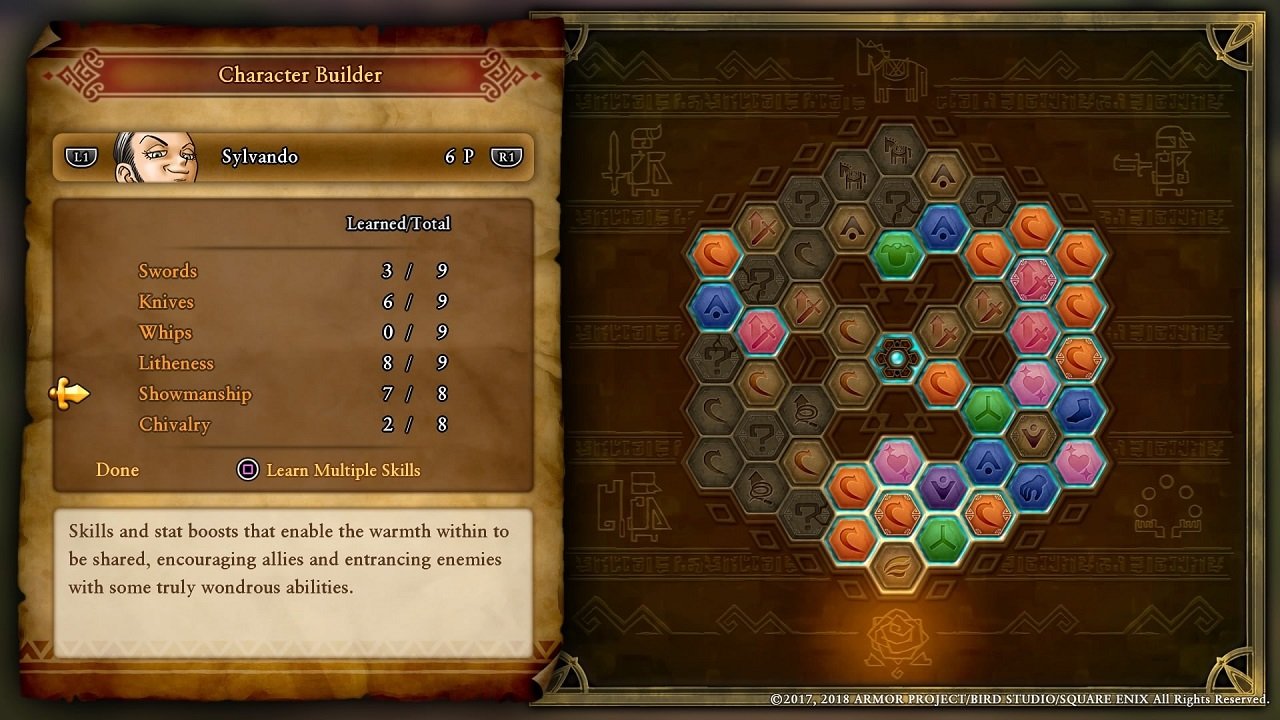 It’s odd that Sylvando starts with a sword because the associated tree is absolute garbage. There’s barely any attack power or critical hit chance boosts, and all of the skills are standard. Hell, you can’t even invest in it to sneak your way towards some high level skills like others characters can.

The only redeeming quality for this tree is Metal Slash, as its one-half of a Pep Power needed for a side quest and useful for Metal Slime hunting. Do be aware, however, that even those uses will be rendered obsolete rather quickly.

Much like Erik during the early game, Sylvando will get the most mileage out of knives by comboing either Cobra Strike and Victimisser or Sleeper Hit and Persecutter for that sweet 6x bonus damage. And as an added bonus, this combo is easier to make use of thanks to his early access to Nastier Knives increasing his status infliction rate.

Beyond that? Well, Sylvando’s ultimate weapon is a knife, so you’ll probably be inclined to use it despite the relatively low attack power.

I’ve said it before and I’ll say it again: I like whips — they can hit all enemies within a group and are fantastic for spreading status ailments to multiple targets.

Compared to Veronica, Sylvando’s Whip tree is inferior, lacking skills such as Twin Dragon Lash (2-hit aoe attack with each blow doing more damage that usual) and Whipcrackle (strong lightning-elemental aoe skill). In exchange, however, he has Lash Batter which has a chance to beguile a group of enemies and a higher natural strength stat.

As such, Sylvando will be the prime candidate to become your whip user in non-grind-heavy playthroughs that doesn’t have take on either of his specialized roles.

The Litheness tree is where Sylvando’s unique traits will start to manifest. From the get-go, he will have access to Hot Lick, a fire-elemental skill that scales off of DFT, and Sobering Slap, a sublime support skill that removes paralysis, sleep, confusion and beguilement from a single ally.

Furthermore, on top of all of those juicy stat boosts, the tree also contains Tap Dance (doubles Sylvando’s evasion rate) and Have a Ball (six half-damage hits to a group of enemies which also has a chance to inflict confusion).

All of a sudden, we’ve gone from relatively weak trees to solid ones, and we haven’t even reached the good stuff yet.

Sorry, let me start over.

Showmanship is the unique tree that you should rush (ideally via Litheness) and invest heavily in from the moment Sylvando joins your party, as this is where his key skills are located. Leading the pack among these is Hustle Dance, which will be the first AOE heal available to you if you take my advice. Not only does Hustle Dance come at a time when AOE damage starts to become more common, but it doesn’t scale off of Magical Mending, but Charm instead. This might not seem too special at first because his natural Charm growth is average, but it will eventually skyrocket if given the proper equipment, making Sylvando your strongest healer if built correctly.

And lastly, there’s the Charm +40 which houses a bonus 10 SP when unlocked and Dual-Wielding that can be used to equip another one of Sylvando’s special knives, taking his Hustle Dance and That’s Amore to staggering new heights.

You can go through the entire game without unlocking Chivalry, and though you probably won’t miss it, you’ll definitely appreciate it once it’s unlocked.

Simply put, Chivalry allows Sylvando to serve as a tank for your party, effectively making use of the only stat he naturally excels in: RES. Not only can he take hits using Whipping Boy, but he can reduce the damage he receives once you purchase Whipping Joy and counterattack upon getting Whipping Ploy. Furthermore, he’ll become tankier in general thanks to the Resilience +20 node and Grand Stand skill (attack and defense self-buff).

Aside from being able to tank for his allies, Chivalry will also grant Sylvando a unique skill known as Ladies First which will allow a chosen female ally to immediately act (a fine way to help Serena if her low AGI becomes a problem).

Lastly, Pep-Up Power-Up should be acquired when given the chance (per usual), and if you want to try something different, you can use Finger of Justice for non-CHA-based damage.

That’s it for Sylvando’s role in Dragon Quest XI: Echoes of an Elusive Age. He might start off painfully average, but if you make the right choices and get the proper gear, he’ll easily become one of your most useful characters. Just be prepared for what feels like hours of slaving away in the casino…unless you like that sort of thing.