Tip the scales of this fight with this guide! 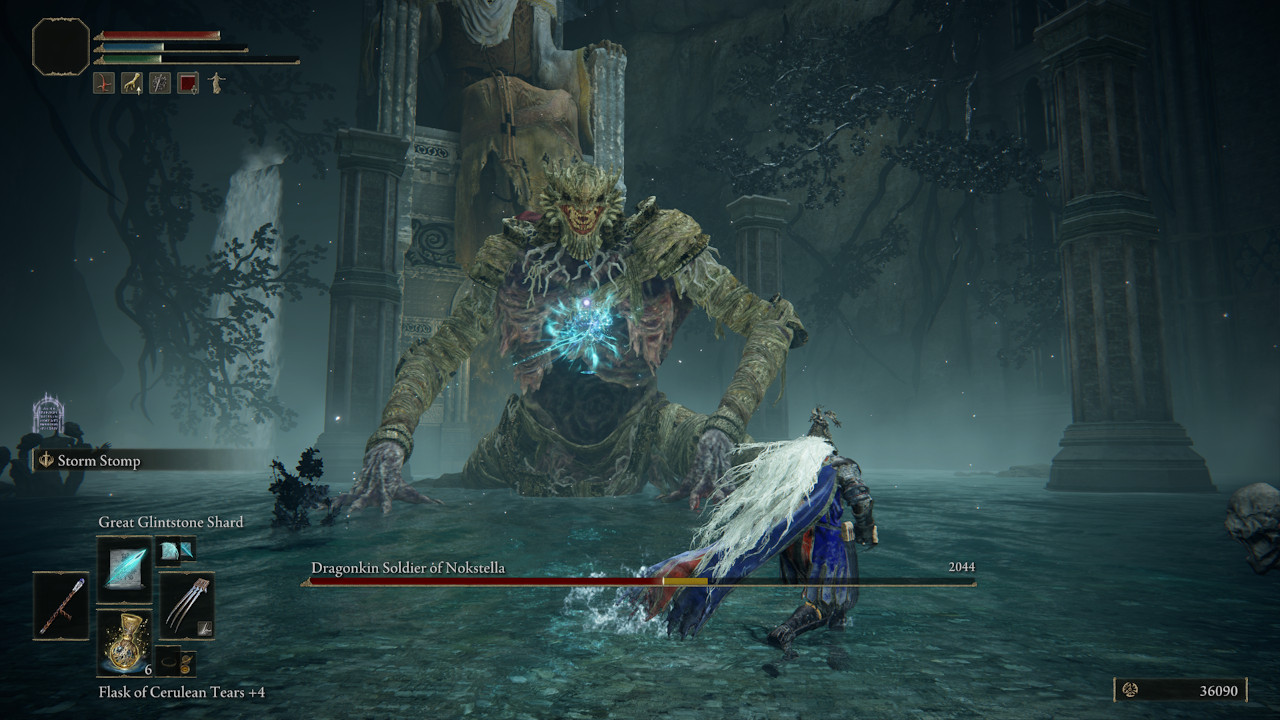 You’re in Ainsel River, enjoying the mysterious and dangerous corners of this area characteristic of Elden Ring when suddenly, you come up to a breathtaking and horrifying sight.  Up ahead are countless petrified bodies, and a mummified giant atop a throne.  You dare to step ahead and are ambushed from above by a giant defender, the Dragonkin Soldier of its namesake city, Nokstella, and it doesn’t look eager to negotiate.  Read on for our guide on How to Beat the Dragonkin Soldier in Elden Ring!

The Dragonkin Soldier is a big, agile opponent capable of covering long distances even with its melee attacks, and has decent magic capabilities on top of that, so use the pillars on the field as cover.  The boss isn’t extremely bulky or defensive and is a big, easy target for close or ranged combat.  If you break it down with enough attacks by a heavy weapon such as a hammer, it’ll collapse and you’ll be able to unleash a critical attack on its face. 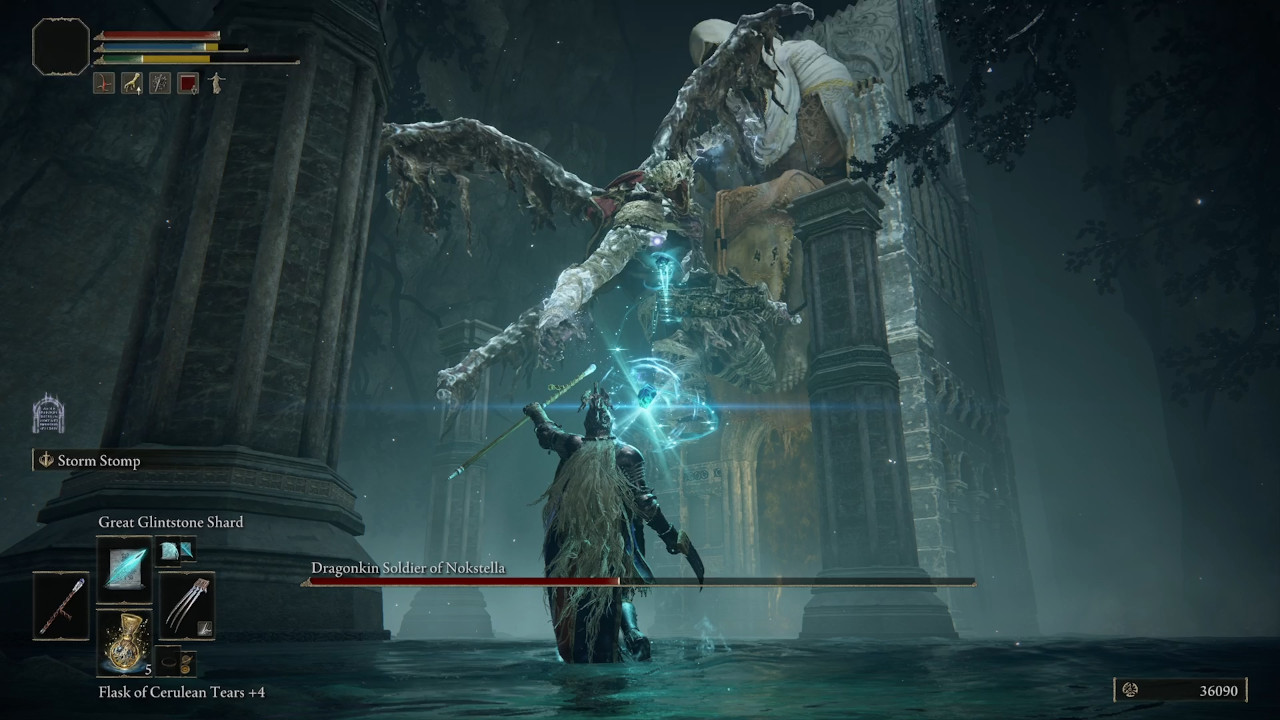 The Dragonkin Soldier has 3 noteworthy attacks you should watch out for.  Its more common attacks are well-telegraphed, often sweeping the ground nearby with its arms, but there are a couple of noteworthy techniques it can use to trip you up.  The first important one is a physical attack where it takes to the air, raises its left arm, and lunges down at you for a quick attack.

Another is a magic-based one where your main warning is a circular template that appears beneath where you are standing, which pulses with energy; run away from this template or dodge out to avoid this attack.  Finally, the boss’ signature Frozen Lightning Spear is a giant magical spear projectile it launches at you, and it causes an explosion where it lands.  Either of these is still relatively reasonable to dodge, and the boss can be taken down with patience. 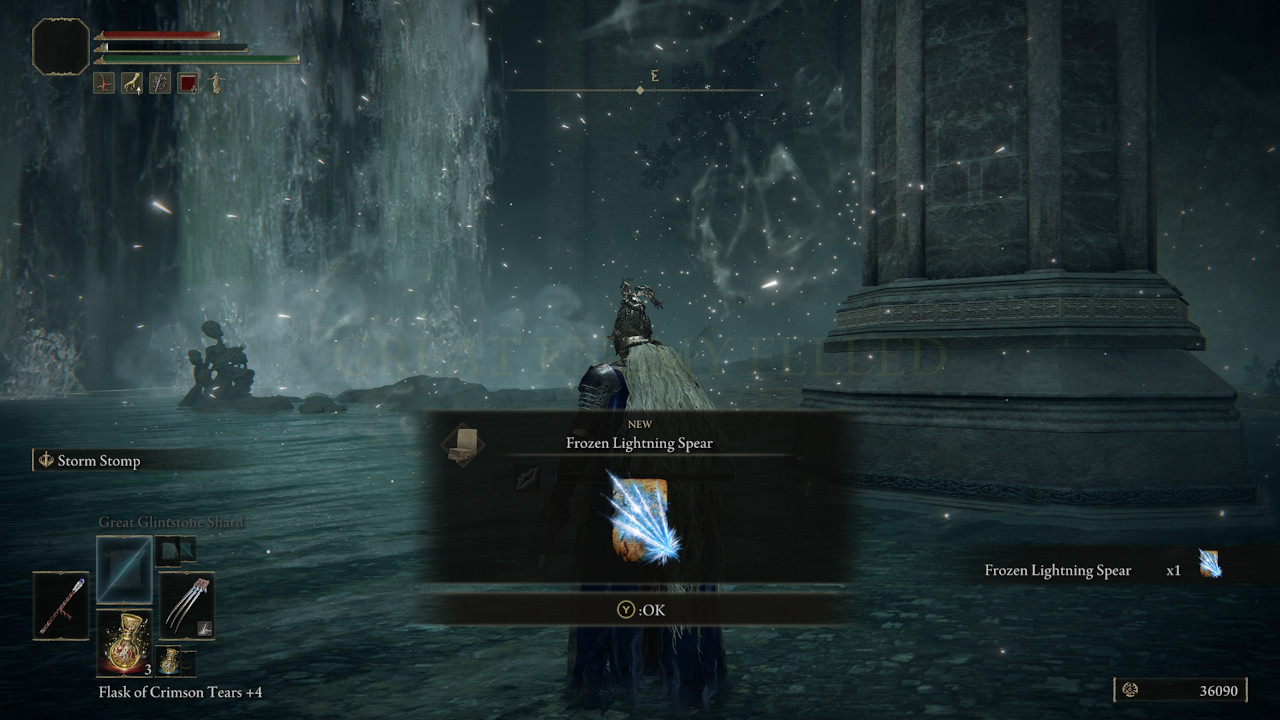 Your prize for winning is 12,000 runes and the Frozen Lightning Spear incantation.  This will also open up a site of grace in the area, so explore as you wish from here, ambush-free, for now.

This concludes our guide on How to Beat the Dragonkin Soldier in Elden Ring!  Be sure to check out our other guides including the map of the surrounding Ainsel River area, as well as our review!