Will you push for the top score in these difficult domains? 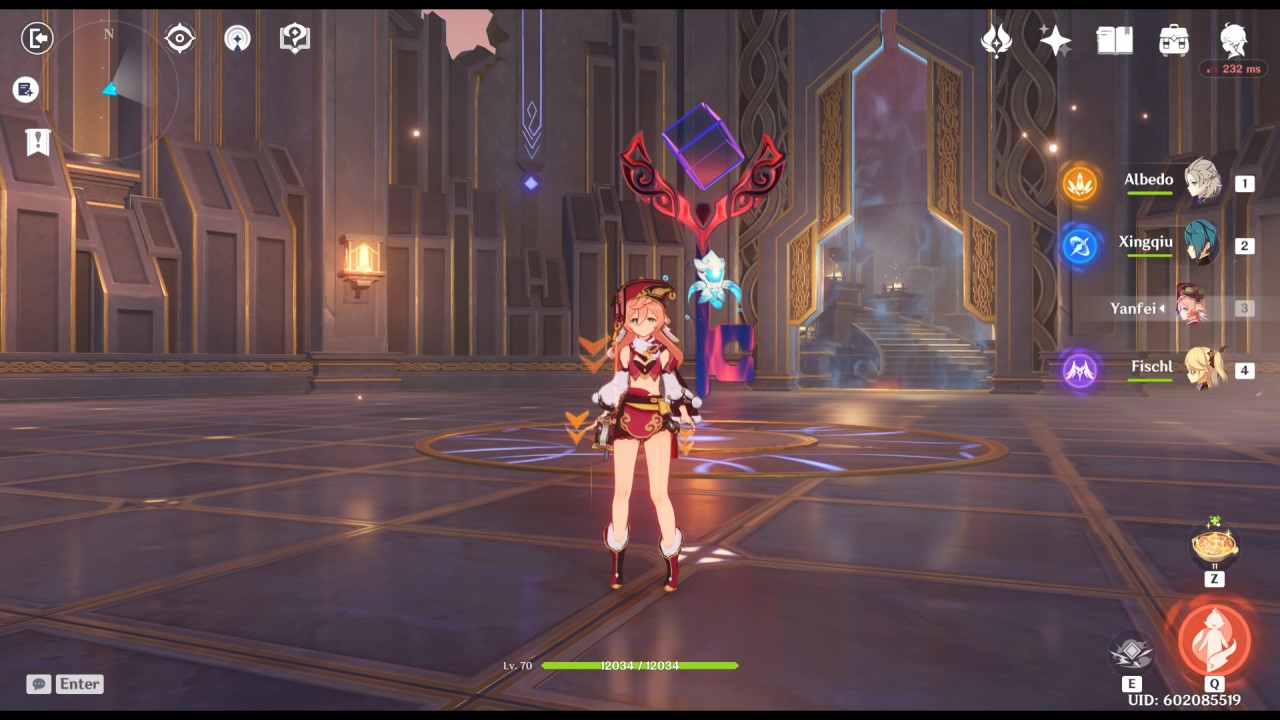 The Twisted Realm is a “new” domain in Genshin Impact, exclusive to the Energy Amplifier event. It’s similar to the Hypostasis event from earlier this year: you’ll select the challenge you want to take on, then tune the difficulty and modifiers to your liking in the pursuit of a high score. It can be tackled in coop, but you’ll need to manually form parties with either your friends or randoms (there’s no matchmaking for the Twisted Realm, which is a bummer). That said, you can easily grab all the Primogems on offer in the Energy Amplifier event if you don’t mind running the Twisted Realm on lower difficulties.

Genshin Impact Twisted Realm – How to Clear the Domain 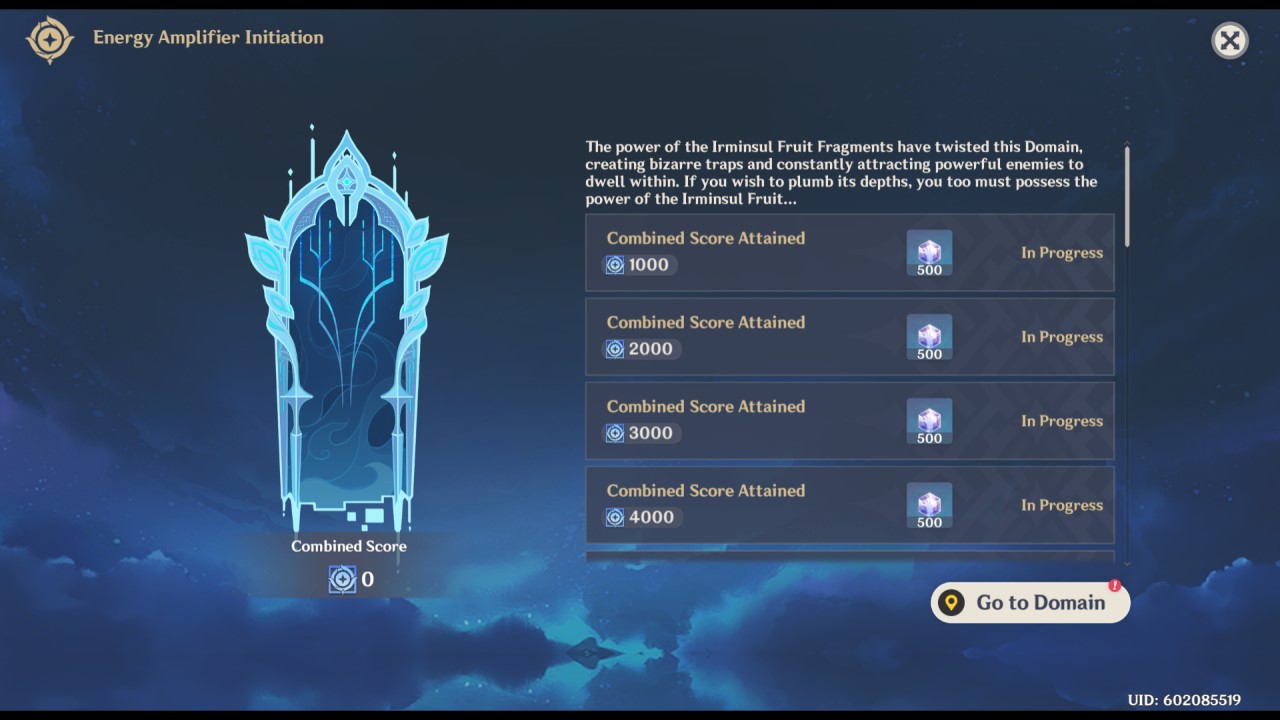 Each will have a selection of enemies to overcome, and a special Ley Line Disorder that will make your run more difficult. As an example, the Doman of Deceit features Geovishap Hatchlings and Geovishaps, and the Ley Line Disorder makes it so, “defeated opponents will drop unstable High-Energy Crystal Cores that will explode when characters get close to them, dealing Geo Damage to nearby characters.” The details for each challenge will be unveiled as they unlock, and they can be previewed upon entering the Twisted Realm.

If all you are after are the Primogems from the Energy Amplifier event then you only need to clear each domain once to grab 60 (per domain). Difficulty doesn’t matter in this case: your first time clear will reward you with Primogems, but you have to redeem them from the domain selection menu at the Twisted Realm.

If you want Fractured Fruit Data you need to clear certain score thresholds. Every 1000 points will award Fractured Fruit Data, up to 20,000 points (this total is a combination of all four of your high scores across each domain). Keep in mind the amount of Fractured Fruit Data earned from each threshold decreases the higher you go, so travelers that are at a lower level, don’t have any friends to assist, or both can grab the majority of event shop rewards by at least reaching a score of 10,000 (Normal difficulty with enough modifiers to reach 2500 in each domain). 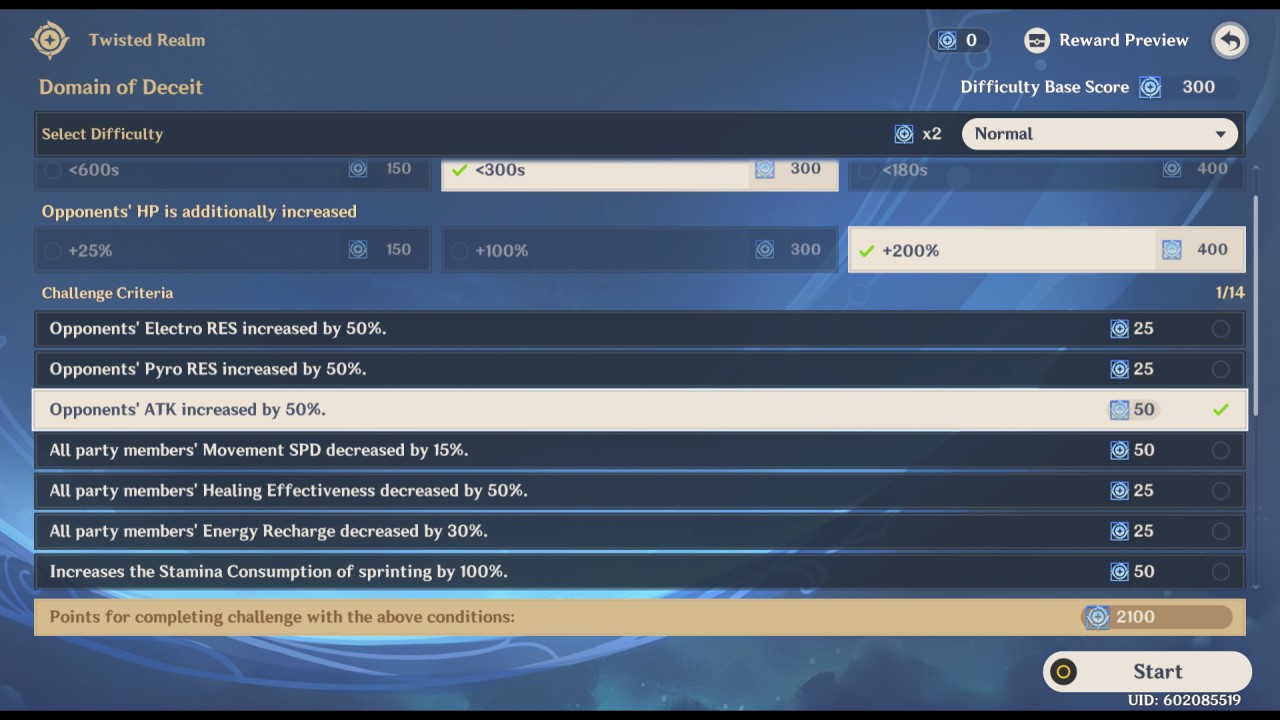 To increase you score you need to first select a difficulty (which will multiply the total score your modifiers add up to). After, pick the length of the domain and the total health of your foes, followed by the modifiers you are willing to deal with. As a general rule of thumb you want to avoid anything that actively reduces your damage. That said, pack a lunch: you’re gonna need food for healing and buffs if you want to make your life in the Twisted Realm easier.

Remember to keep an eye on the difficulty modifiers in each domain and not only adjust your team accordingly, but your Energy Amplifier. Change up the Fractured Fruit you have slotted in to better benefit your run – in short, if you’re not going to bring a Cryo character then don’t have Fruit equipped that relies on Cryo characters. Build for success, and use the Energy Amplifier to overcome deficiencies in your team. Balance both and you’ll overcome the Twisted Realm in Genshin Impact.