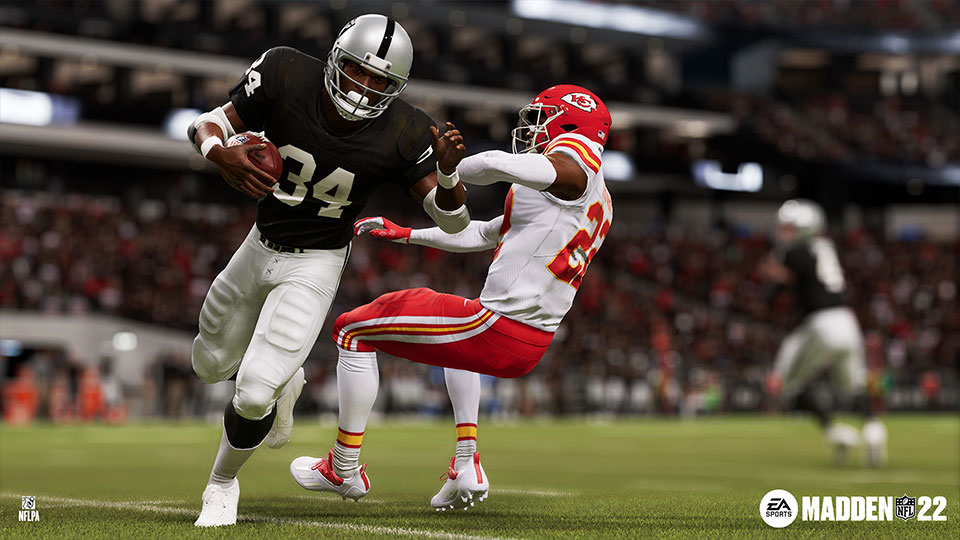 Update 2.03 has arrived for Madden NFL 22 and here are all the changes and fixes added with this patch. The game has been massively improved since its launch and it all started with the update released last month which added an astounding amount of changes like new X-factor abilities, added likenesses, and tons of quality of life improvements that you generally don’t see that soon after a release of Madden NFL 22’s magnitude. That update was one of those game-changing ones that often changes the direction a game is going. Update 2.03 is more of a housekeeping update, but there is still plenty to like here. Here is everything new with the Madden NFL 22 Update 2.03 Patch Notes.

The huge addition to this update comes in the form of the legendary Bo Jackson. Everyone who plays Madden NFL 22 from November 19th to January 14th will get an 85 rated Bo Jackson in a raiders jersey added to their Ultimate Team Squad. In addition to this, a bunch of Bo Jackson gear will appear in the game as well, so fans of the superstar will certainly find a lot to love in this update. For the entirety of this update duration, Bo Jackson will also appear on the cover of Madden NFL 22, marking an iconic moment for the franchise which generally features current players on their covers each year. Madden NFL 22 Update 1.08 Patch Notes Update 1.o8 has arrived for Madden NFL 22, and here’s the full list of changes and fixes added with this...
Attack of the Fanboy

Madden NFL 22 Update 2.01 Patch Notes Everything new with the Madden NFL 22 2.01 Update.
Attack of the Fanboy