"Only through conflict do we evolve." One of the bigger Hero changes in Overwatch 2 is that Doomfist is now a Tank instead of a Damage dealer. While some of his gameplay remains unchanged, he is still quite the powerhouse. Here, we can break down his strengths, go over his abilities, and give some strategies on how to use this Hero.

Since Doomfist is now a Tank Hero, he has a larger health pool to make up for the change. His abilities will also generate temporary health for him, allowing for additional damage to be absorbed.

He still has his Hand Cannon which is his primary form of fire. The damage has been slightly nerfed but has been given a faster regeneration time. It’s like a shotgun that reloads automatically. Since it’s also like a shotgun, it’s much more effective at close ranges.

His first ability, Seismic Slam, works similarly to that of Winston’s Jump Pack ability. You propel yourself into the air and slam down in the direction you’re facing. It creates an AoE shockwave that damages nearby enemies. Additionally, this can be canceled to throw people off or for mobility purposes. 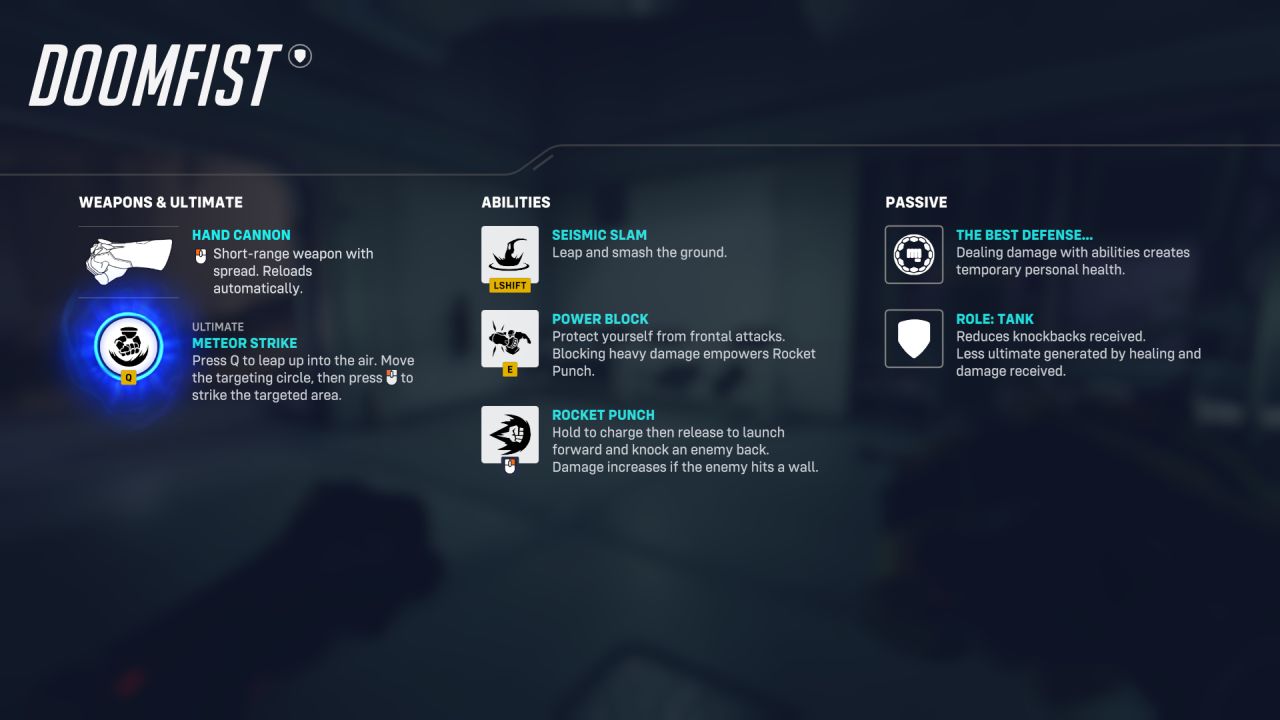 As for where things are massively changed, he no longer has Rising Uppercut. Instead, Doomfist has a new ability called Power Block. During this, he takes significantly reduced damage from the front, which then adds more power to this next ability, Rocket Punch.

Since Doomfist is no longer a DPS character, his Rocket Punch has had its damage reduced to work more as an AoE crowd-controlling ability. It can still do some work if powered up with Power Block, but it is now used more to knock enemies back, with bonus damage if they hit a wall.

Finally, his Ultimate ability, Meteor Strike, is now used more as another crowd-controlling ability. Think of it like Reinhardt’s Earthshatter ability. Instead of knocking down opponents, it slows them down by half their speed. This is ideal to either slow an enemy team down that needs to get to a point or even pick off a more nimble composition.

Doomfist is another solid pick if you’re going for a dive comp. Much like the new Tank Hero, Junker Queen, he can lead the charge into a fight. He also plays a bit like Zarya, taking in some damage to charge up another ability. Instead of being as lethal as he once was, he can definitely slow down enemy advancement and even help at softening up targets.

He pairs well with a team that is aggressive. If he’s paired with a Zenyatta, that Orb of Harmony can help him stay alive longer in the front lines. He can also help Lucio stay relatively close in battle, slowing down the actions of his teammates. Having a team of ranged attackers won’t help Doomfist much here.

You have to know when to pick your fights and who to pick them with using this Hero. Doomfist can’t simply run in and save the day. He needs a team to back him up. His kit is a lot more intense, so you have to be doing more than just shooting his primary fire.

He’s best used in a setting where his team can be close to him. Some tanks can dish out a decent amount of damage like D.Va, but he provides more utility than anything. Don’t expect to be the premier damage dealer, but more of the person to take aggro and lock down an area.

Also, don’t overextend. Even though Doomfist can absorb damage and gain health back from abilities, you don’t want to feed Ult charges for the enemy team. He also shouldn’t be the one to deal with the harder-to-hit targets like Genji, Tracer, or Sombra.