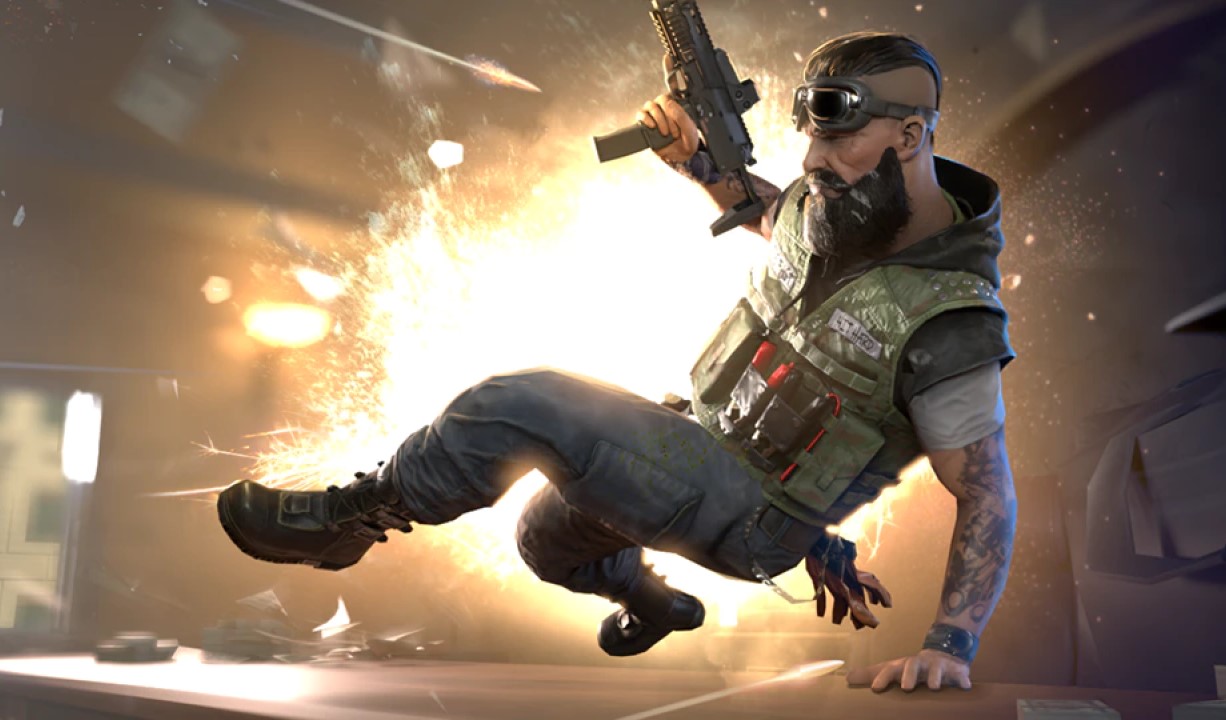 Currently, there are eight attackers that you will be able to play when the game launches. Let’s go over which attackers you should set your sites on first.

Glaz has received numerous buffs on the main version of Rainbow Six Siege to bring him more in line with other operators’ viability. Even with the buffs, he is still on the lower end of the operator popularity. Since the mobile version of Glaz doesn’t have access to the same arsenal as the main branch version of Glaz, he is the weakest of all the attackers game-wise.

Glaz may have one of the strongest weapons in the game, a DMR that can three-tap most operators. But this requires you to be deadly accurate and to hit all your shots before an enemy notices you. Glaz is most well played covering a choke point or watching a planted bomb. He’s not entirely useless, but every other operator has a more prominent role in team play and taking a site.

Ying’s Candelas can quickly blind any defender in a room and make them an easy target. The issue is that her Candelas can blind any teammates hit by it as well, making it more of a liability than a useful tool. While her LMG provides her great room-clearing potential when combined with her Candelas, she is more of a solo pusher since no attackers can look in the general direction she throws her Candelas. Unless they want to be blind for a few seconds and provide no cover during the time Ying would be pushing in.

Sledge is an all-around solid and simple operator. His gadget is a sledgehammer that can be used to open any soft walls and floors as well as open any barricaded doors. His assault rifle is also average damage-wise with very controllable recoil. The main thing holding him back is that he does nothing outstanding and using his gadget too much can be a detriment to the team.

Opening a few holes for your team is good but most operators can achieve the same effect on a soft wall or floor with punch holes or a hard breaching gadget. If you open too many holes as Sledge, the defenders will have an easy time retaking a site as they can just use one of the many holes to peek you.

Using a shock drone to destroy electronic gadgets the defenders may have seems like a great idea on paper and is decent in the game. The issue comes from the limitations it puts on your drone. After you destroy the defenders’ gadgets, you will normally want to use your drone to scout out where defenders are hiding in the site without exposing yourself.

Twitch’s shock drones can’t jump and don’t move as fast as regular drones, which makes them a much easier target for a defender to hit. This means you can check at least two spots for defenders before you are out of drones and have to peek at every angle for yourself.

For anyone that has played Rainbow Six Siege before, the name Ash is sure to bring up some memories. Whether you were the Ash players that rushed into a site and took everyone down before people knew what was happening, or you were on the receiving end of an Ash rush.

It makes sense that she would be as oppressive in Rainbow Six Siege Mobile as she is in the main version of the game. With her staple R4-C and breaching rounds, she is sure to catch any defenders off guard with a swift rush into the site.

A big part of siege is the ability to reinforce a wall and consider it safe. Having the ability to break down these safe walls and shake up a defense is what makes Thermite so strong. The only downside you run into with Thermite is that you can only take down two or three walls depending on how many breaching charges you have.

Championing the highest ban rate out of all the operators in the game, Thatcher must be the most powerful operator to be this hated. Despite the high ban rate, his ability is quite simple. He can throw EMP grenades that disable or destroy any defender’s electronic gadgets.

Such a simple gadget may make the highest ban rate seem silly until you go up against it. A defending team can spend as many resources defending a wall as they want and all thatcher needs to do is throw a grenade on his side of the wall to open it up for a hard breacher. 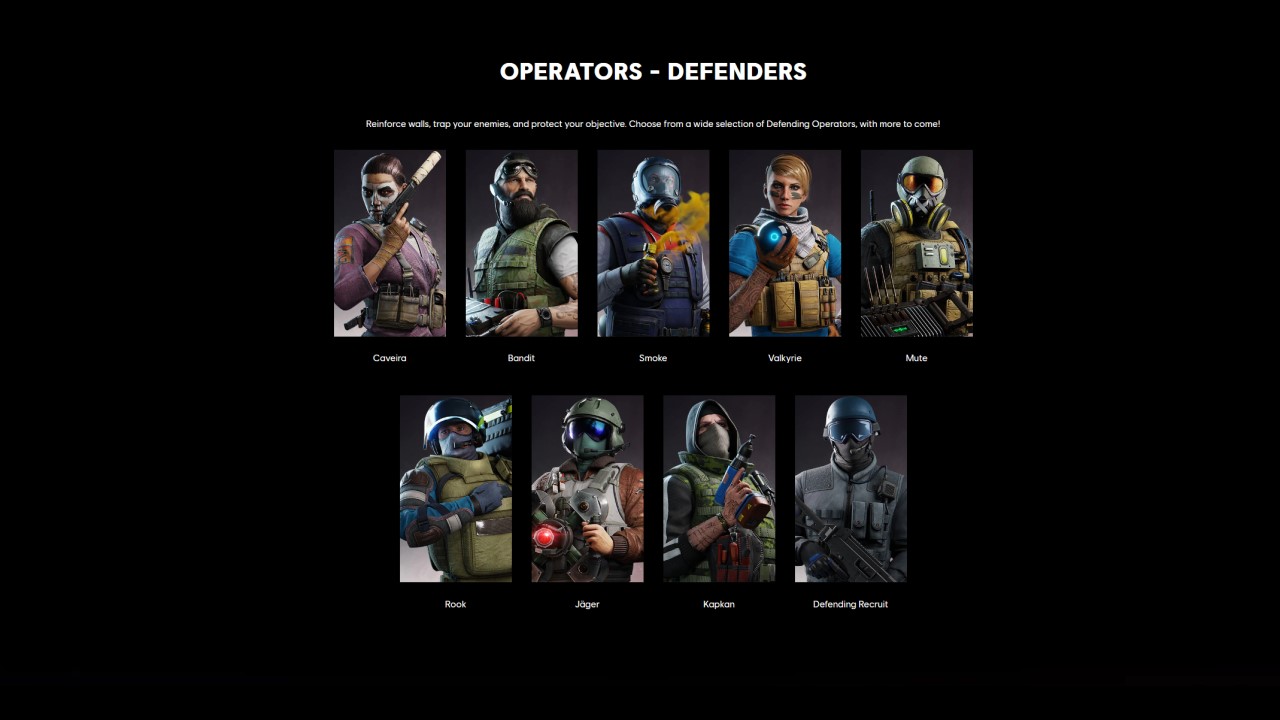 Just because he is at the bottom does not mean that Rook is a useless defender. He is just quite simple and brings very little defence-wise to a team. By putting on one of his bulletproof vests, his teammates will gain a bit of extra health. However, the health gain is so small that it normally means they need only one extra shot to bring them down.

This is made even more redundant since siege has the one-shot headshot system no matter what weapon or armor you are wearing. Rook is still the go-to choice for anchoring on site as he is the tankiest operator in the game. But outside of that, he pales in comparison to other defenders.

Traps are a great way to catch unsuspecting players off guard and pick up a free kill. But as players get better at the game, simply knowing a Kapkan is in play will have them checking every doorway they walk through.

You may still be able to pick up a clutch kill from the grave as the round is ending and the attackers are rushing into the site to plant the bomb. But most of the time all of your traps will be shot out by a twitch drone as soon as you put them down.

The ability to place a camera anywhere on the map is quite strong and is made even stronger when you are communicating with your teammates so you don’t need to ping with the camera. But to make the most use of the cameras you will need that communication that isn’t normally there in your average game.

In a regular game, your teammates will use the cameras after they die and ping once with them causing the attackers to look around and most likely find your camera. You may be able to find a few sneaky spots to throw them into that will let teammates ping away and distract attackers, but that will be quite rare.

Grenades are one of the safest ways to either kill a defender or force them out of the spot they are hiding in so they can be killed. This makes Jäger’s ability to deploy a Magpie Defense System seem quite strong and it is. The only drawback to Jäger is you have to tuck the Magpies away since they can easily be shot and destroyed.

Bandit’s Shock Wire batteries are one of the two ways to prevent a hard breacher from opening up a reinforced wall. This can slow down the attackers as they will need to find some way to destroy the battery if they want to open the wall or rethink their whole attacking plan.

You can also put the batteries into the barbed wire that Bandit has to create an actual shock wire. However, this is quite useless since the batter can be easily shot as it is in the middle of the wire that the attackers would pass through.

Although his Jammers fulfill a similar role to Bandit’s batteries, Mute’s Jammers can do a bit more. On top of blocking a hard breacher from opening a reinforced wall, a Jammer can cover two walls if placed properly. They can also be used to block drones from coming in through drone holes or doorways.

If you place the jammer properly, you can block off a doorway or drone hole without exposing the jammer to that angle. This makes it much harder for a Twitch drone to get into the site and destroy the rest of the defender’s gadgets.

Before the addition of Jackel to the game, Caveria was a menace. If attackers did not properly clear every single hiding spot, they could easily be snuck up by a Caveira and wiped out before they knew what happened.

Caveira also makes solo pushes much more dangerous. If she catches someone by themselves, she can down them and interrogate them to reveal the location of all other attackers for a short duration.

Smoke has one of the few ways to truly shut down an entrance into the site in the game. While attackers could just simply run through his smoke, they would come out the other side unsure where to look and softened up for an easy kill by any defender that hears them rushing through.

This means that smoke can effectively shut down an entrance for 30 seconds total will all of his smoke grenades. If any of these operators seemed interesting to you, make sure to go sign up for early access to Rainbow Six Siege Mobile so you can start unlocking them now.