A swarm is coming. 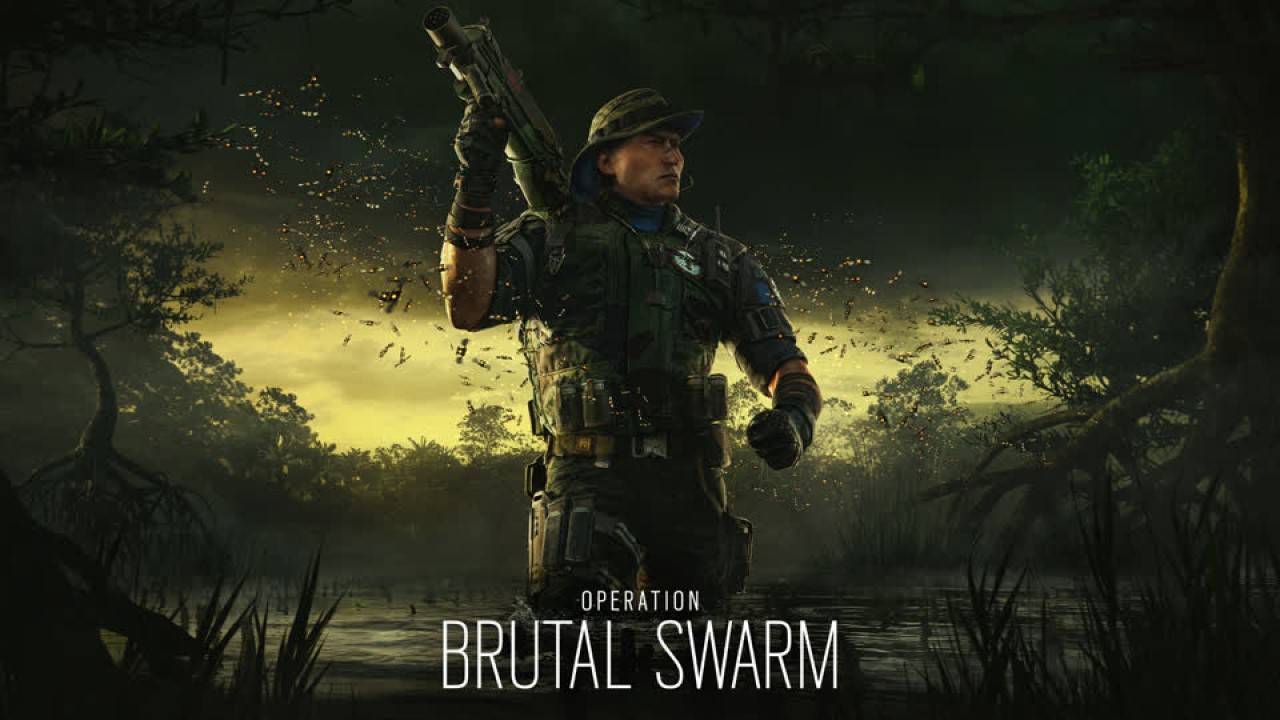 With Operation Vector Glare coming to a close, the Rainbow Six Siege community is getting ready for Operation Brutal Swarm. With not only a new operator coming to the table, but the return of a fan favorite map as a permanent addition to the roster and a new gadget to help out attackers. A couple more quality of life changes will be coming players’ way and a new method to punish abusive text chat. Let’s go over all of the new additions coming with Operation Brutal Swarm to Rainbow Six Siege.

Grim will be the latest operator joining the attacking roster. He is a three-speed operator that can use either the 552 Commando assault rifle or the SG-CQB shotgun with the P299 pistol as a secondary and either breach charges or a claymore as a gadget. He also brings his Kawan Hive Launcher with him which is a great tool for pushing defenders out of hiding spots or covering a flank.

The Kawan Hive Launcher can be used to fire out a canister that will deploy a swarm of robotic bees that hover in the area for a period of time. If a defender is inside the swarm or walks into it, they will be swarmed by the bees and have their location tracked in real-time and shown to all the attackers. If the defender leaves the swarm, the bees will still follow them for a short period and provide periodic pings of the defender’s location to the attackers until all of the bees fade away.

Recoil is once again in the limelight with this overhaul being a drastic change from previous seasons. The aim of this new recoil is “making weapon recoil more meaningful”. This was done to counteract the LMG meta that was prominent and supposed to be addressed at the mid-season of Vector Glare. The new recoil system has been designed to be more punishing toward full auto fire with a scaling recoil system.

The longer you fire a weapon the harsher the recoil will get with most weapons going through three stages of recoil each more intense than the last. LMGs and other high-capacity magazine weapons will have the fourth stage of recoil they can reach if you fire the full mag. The recoil has been scaled depending on the power level of the weapon, so assault rifles will have more recoil than SMGs will. The goal of this change is to reward burst fire with better accuracy rather than holding down the trigger.

During previous Road to Siege Invitationals events, a stadium map has been available to play in a special event playlist. Many players enjoyed their time on this map and were sad to see it go with the end of every SI. The new Stadium Bravo map is designed in a similar fashion to the previous stadium map but with it being a “combination of Border and Coastline” according to the patch notes.

This means the map will most likely have none of the bulletproof glass windows as to make it more competitively viable. It will be nice to see the game in more of a training setting since every match is supposed to be a training exercise.

In an effort to decrease the ban rate of Thatcher, a new gadget is being given to some attacking operators. This impact EMP will function similarly to Thatcher’s EMP gadget put as the name states it will explode on impact rather than rolling around on the ground. The radius of the EMP will also be much smaller than Tatcher’s gadget. This means you won’t be able to hit a Kaid claw and a Bandit Battery with one impact EMP.

This gadget will be available to use on Montagne, Dokkaebi, Gridlock, Sledge, Osa, Lion, Nokk and Blackbeard. None of these operators will be losing a gadget they had access to for these new impact EMPs. The EMPs will instead be a third gadget option for each of these operators’ loadouts.

The war with cheaters is a never-ending battle but now you can help by providing more accurate data. Previously if you wanted to report someone for cheating you would have to do it either during the game or at the match recap. This gave players a report first ask question never way of handling anyone they thought was cheating. Now you can review the match replay to really determine if a player was cheating and report them from the match replay. While this won’t change the reporting of a blatant cheater, it will help get players that try to hide their cheats properly dealt with.

Another change coming is targeted at toxic text chat. New penalties are coming for people who abuse text chat with the first change being players who are repeat offenders will be automatically muted in every match for 30 matches. Players can choose to manually unmute them to read their text chat but seeing a player muted at the start of a game is a good sign to leave them that way. This change will be coming later in the season. When it does roll out, all players will have a grace period to adjust to the change.

Other Changes Coming With Brutal Swarm

Those are all the currently known changes coming with Operation Brutal Swarm. There is still a bit of time until the operation is released so some of this information may change. If you need any more help with Rainbow Six Siege make sure to check out our other guides.