Complete the Savali scavenger hunt to unlock an armor set. 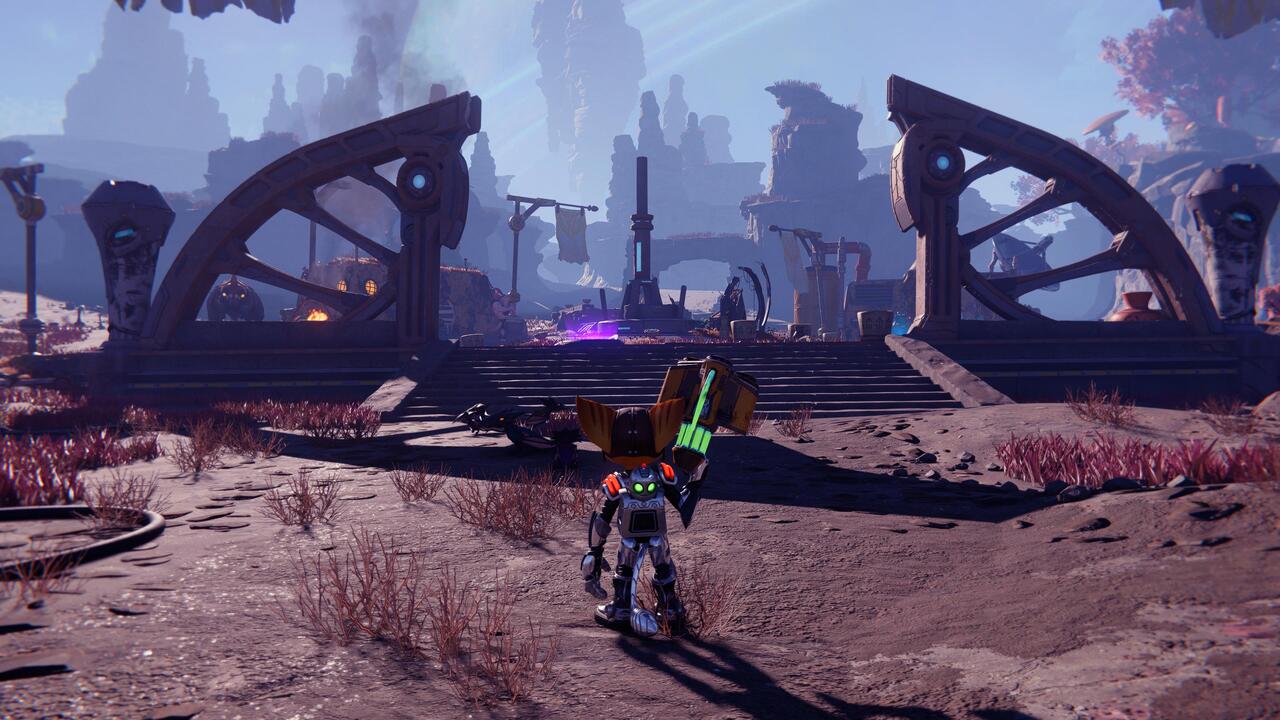 There are 12 Lorbs scattered across Savali. Once you find three of them and bring them to the Monk Scholar, he will mark the remaining nine on your map. Here is map with the locations of all 12 Lorbs. Keep reading below for more detailed descriptions and locations. 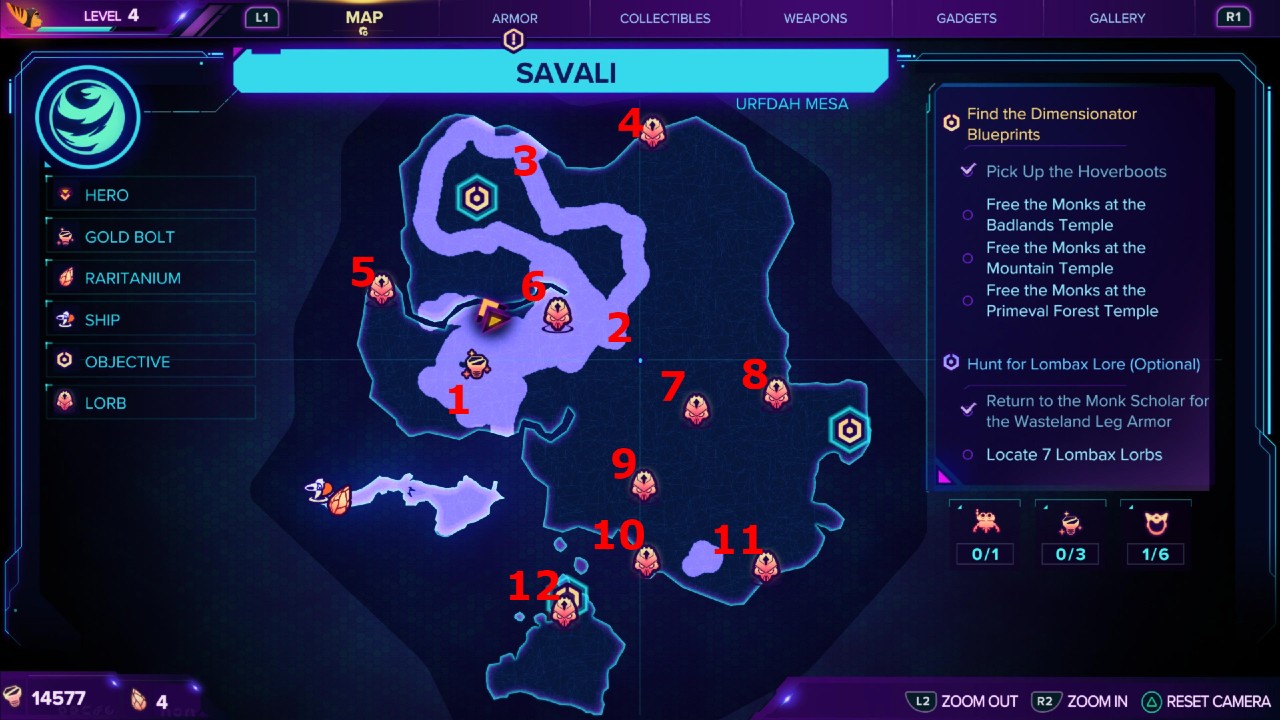 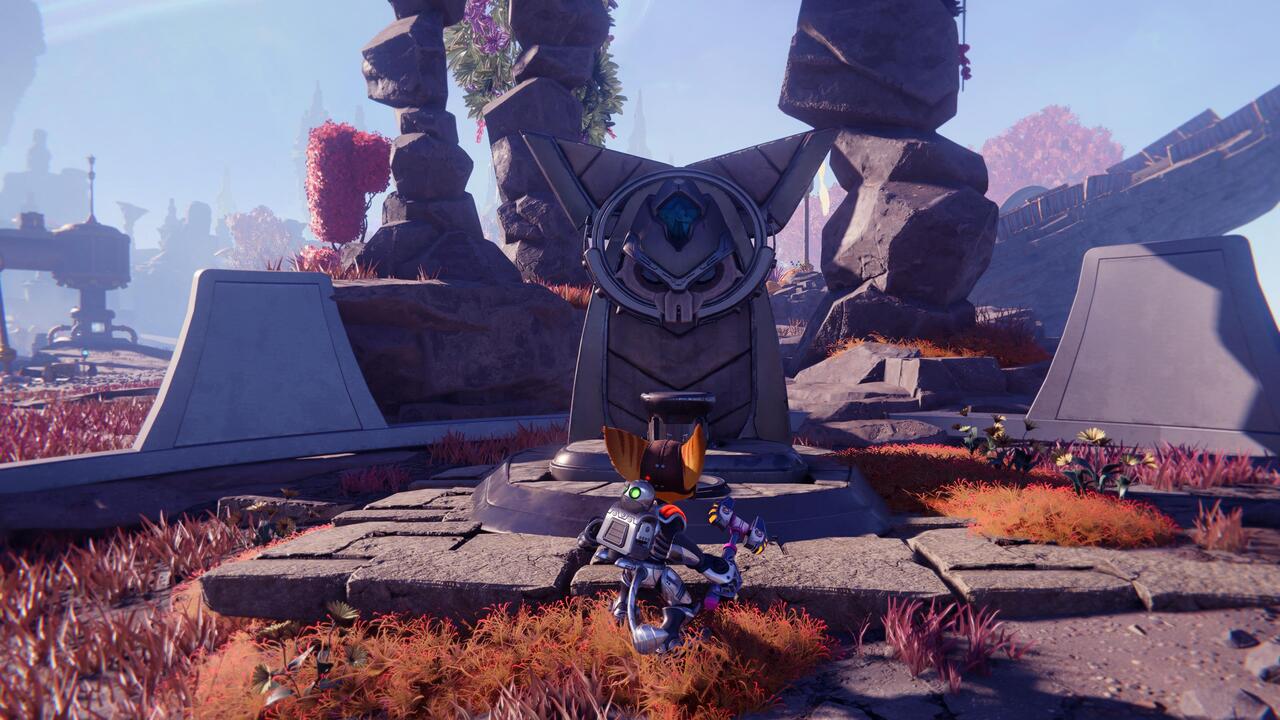 The first Lorb is located in the western portion of Savali, near the Gold Bolt on an elevated platform. In this area, there’s a dome shield that you can deactivate by pressing three switches connected by a long wire. You’ll need to use the Hoverboots and speed along the three switches in order to activate them all. Once you hit all three of them, the shield will power down and you’ll find a Lombax Shrine containing the Lorb. 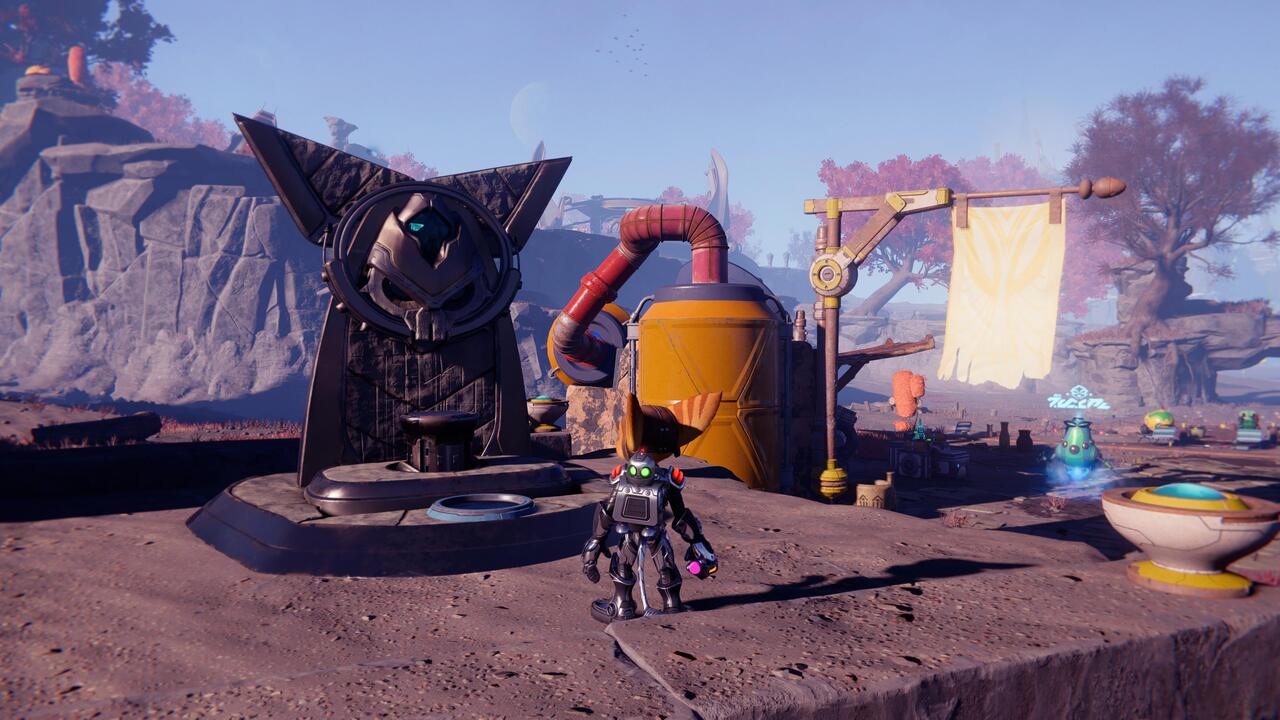 The second Lorb is sitting out in the open near Ms. Zurkon’s shop in the center of Savali. You’ll find the Lombax Shrine on an elevated platform right behind Ms. Zurkon. 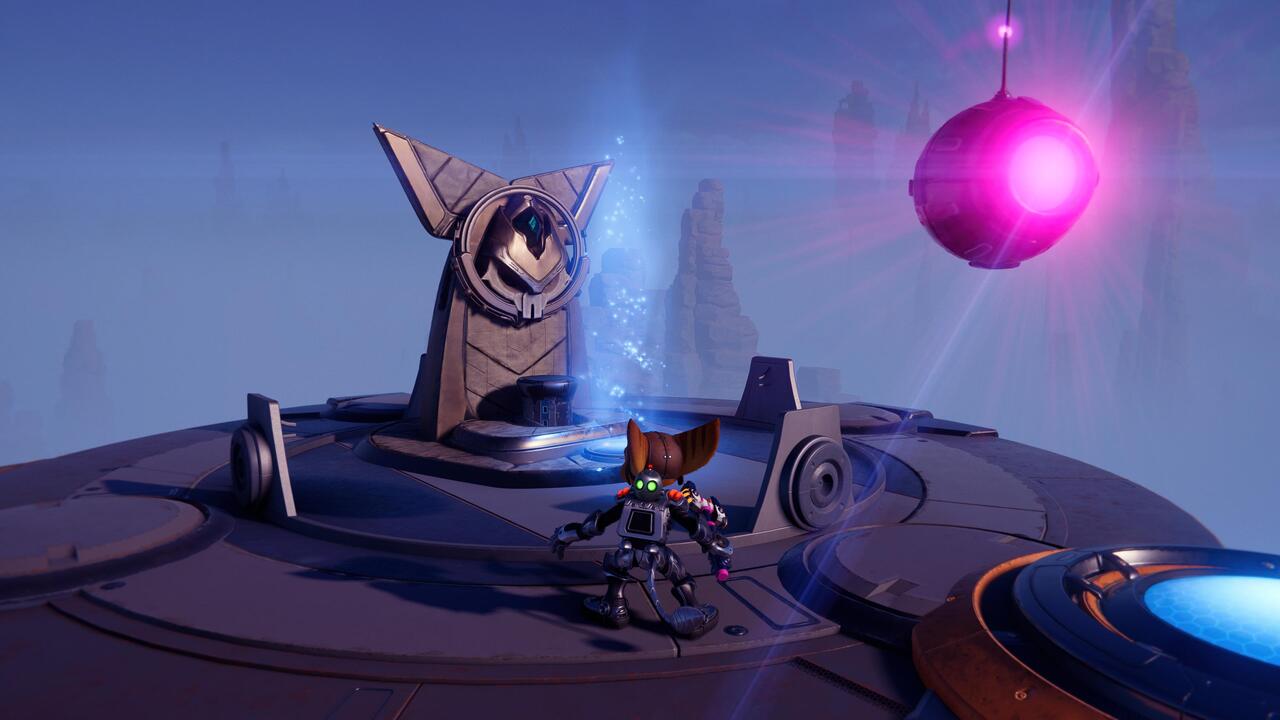 The third Lorb is on a floating platform that is zooming around the northwest corner of Savali. To catch it, you’ll need to use the Hoverboots at maximum speed. When you get close enough, the purple orb on the platform will allow you to grapple to it by pressing L1. Once you get onto the platform, step onto the switch to stop it from moving and power down the shield. With the shield down, you can access the Lombax Shrine and get the third Lorb. 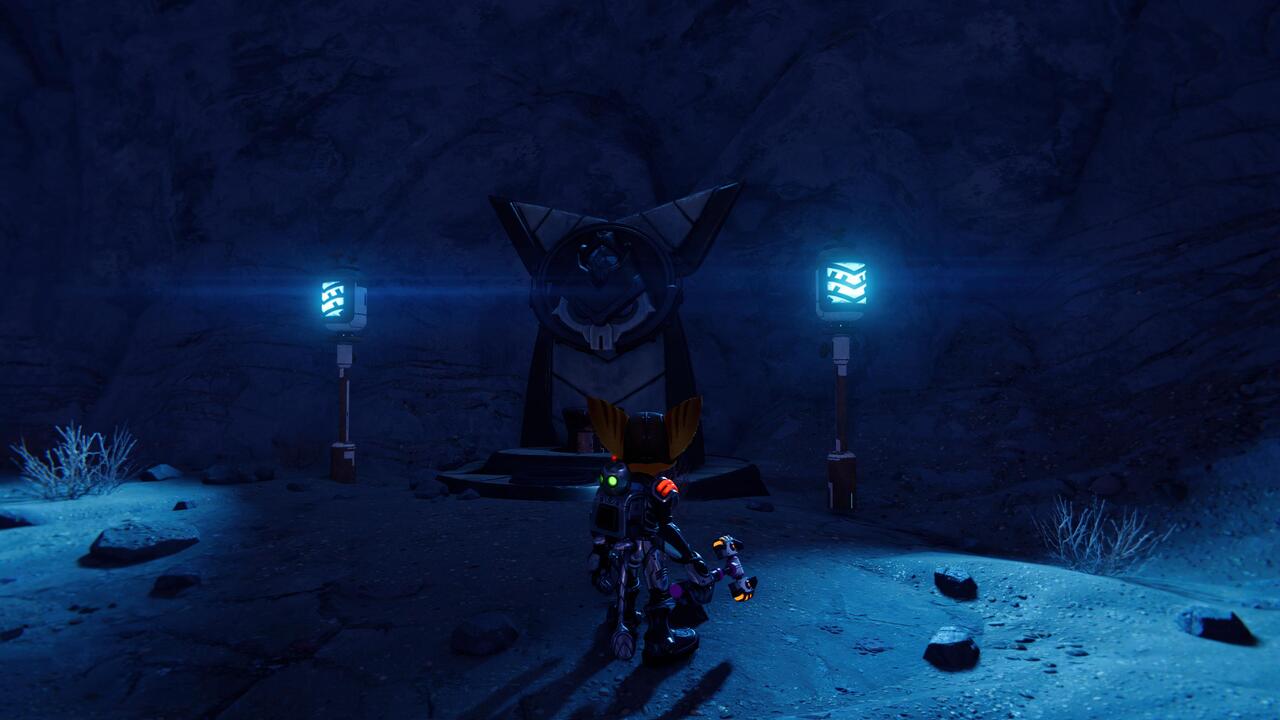 The fourth Lorb is located along the northern edge of Savali in a cave full of Sandsharks. In order to collect it, you must first clear the area of enemies. They’re only Sandsharks though, so it’s not a tough fight at all. 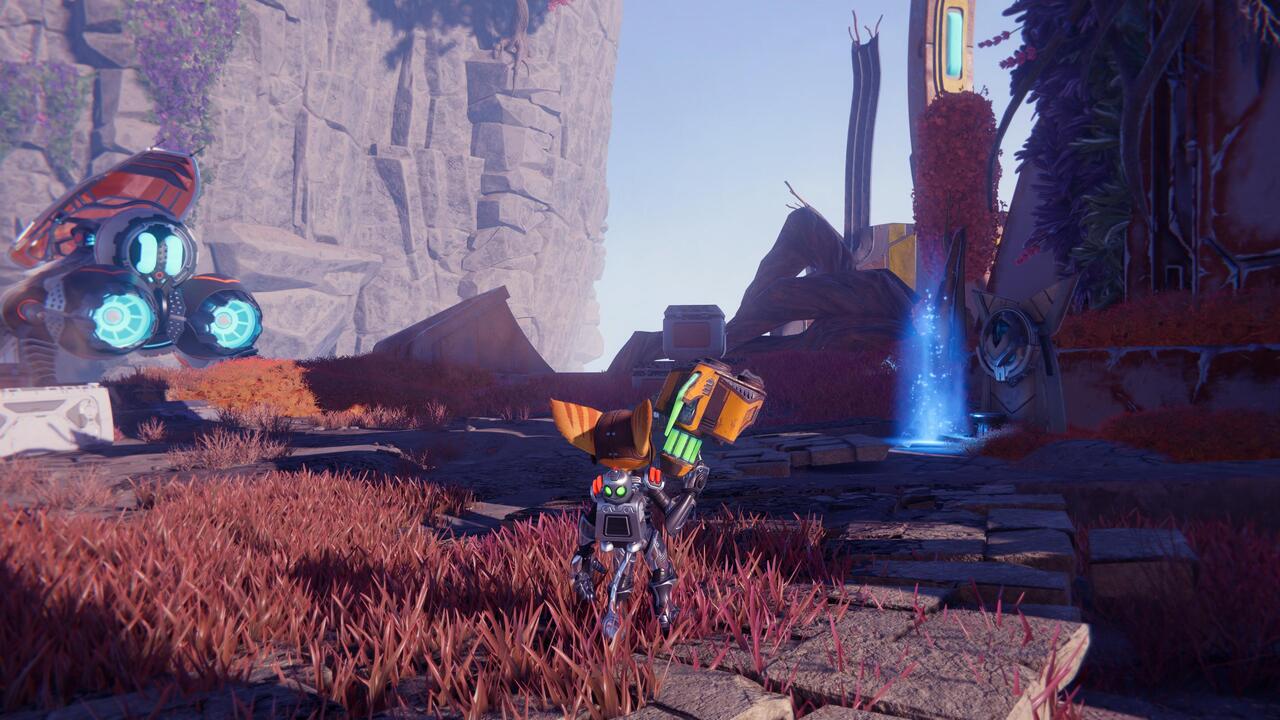 The fifth Lorb is located on the western edge of Savali. It’s guarded by a group of Nefarious Troopers that you have to defeat in order to access the Lombax Shrine. 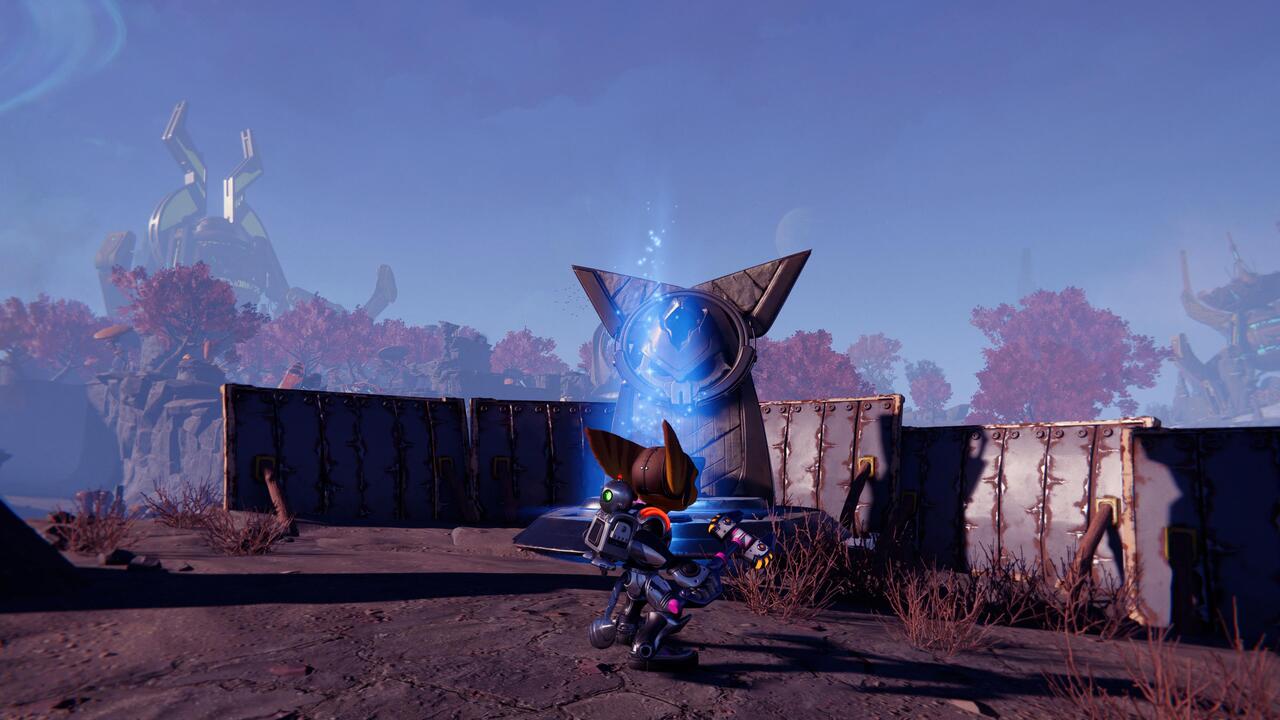 The sixth Lorb can be found on top of a platform near the center of the map, west of Ms. Zurkon’s shop. To reach it, you need to use a ramp located across the crevasse a short distance to the north. Make sure you have the Hoverboots at maximum speed so you can make the jump. 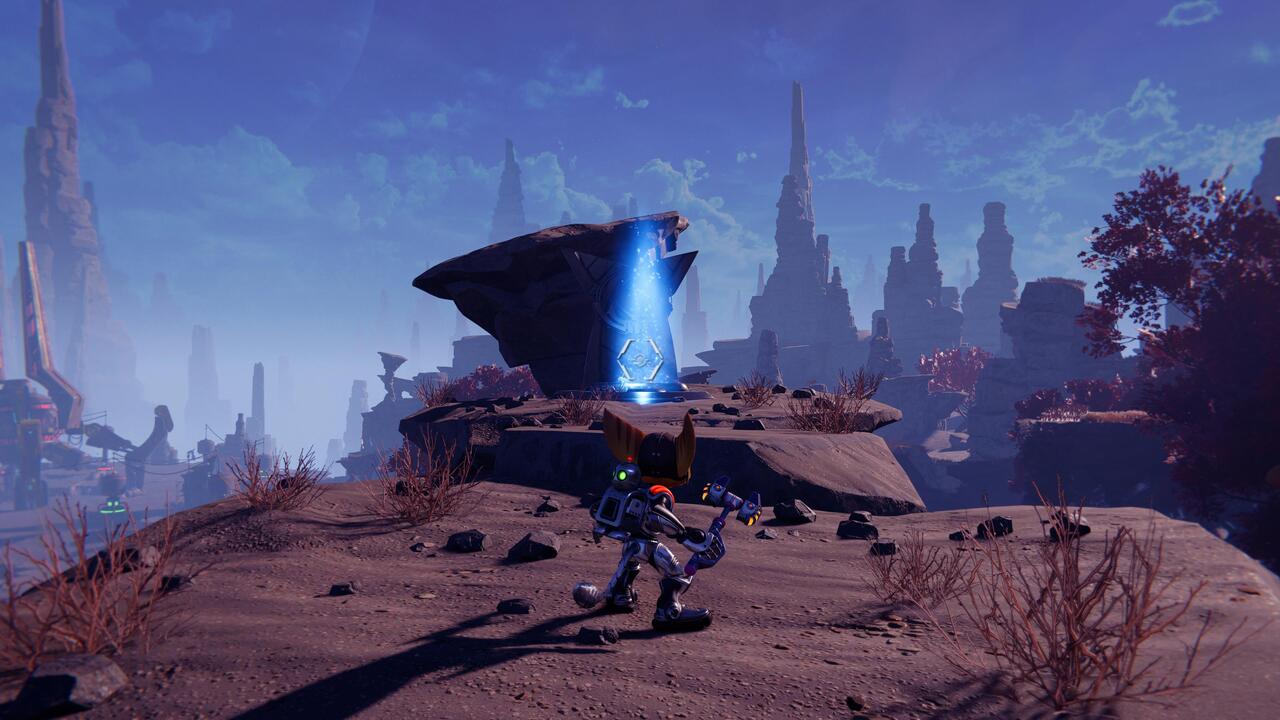 The seventh Lorb is located on an elevated platform in the southeast region of Savali. To reach it, you need to use a ramp located to the west of it. Then, bounce on the mushroom to reach the nearby high platform. Once you’re up there, look around for a dimensional rift that you can grapple to. This will lead you to a second mushroom, which you can bounce off of in order to grapple to a second dimensional rift next to the Lombax Shrine. 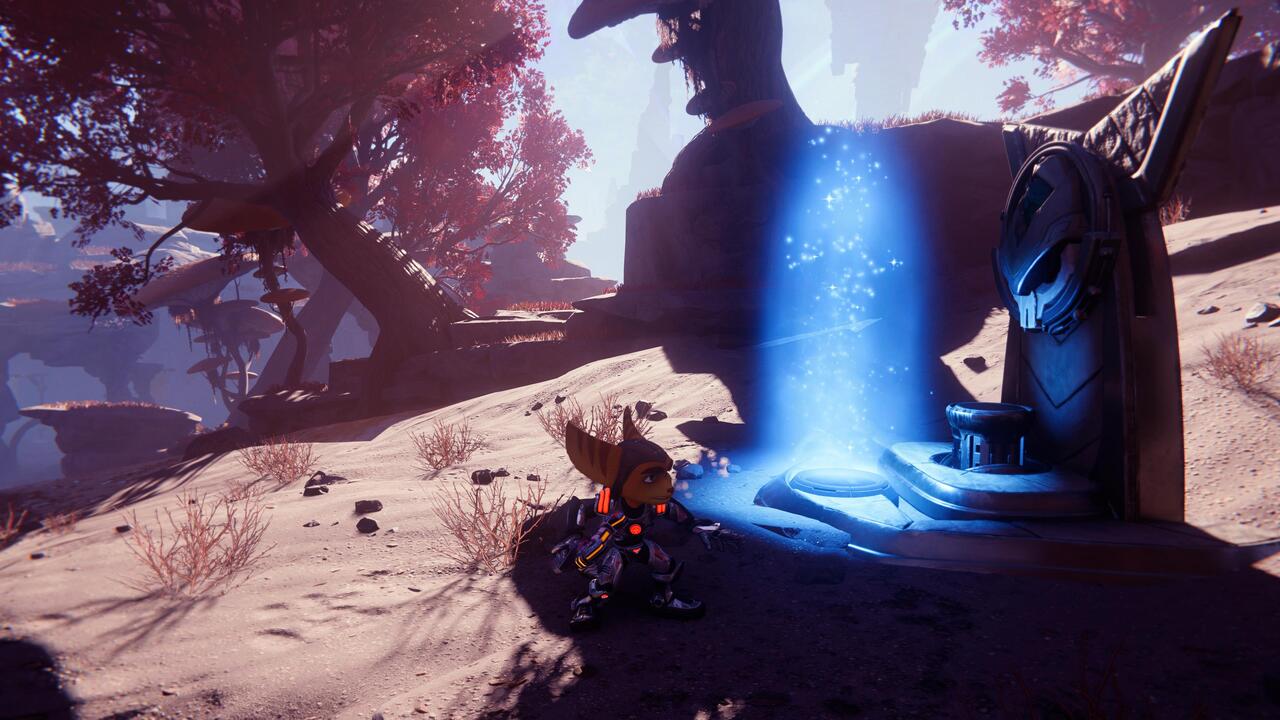 The eight Lorb is located near the eastern edge of Savali. To access the Lombax Shrine, you’ll have to defeat a few Sandsharks and some flying bug enemies. 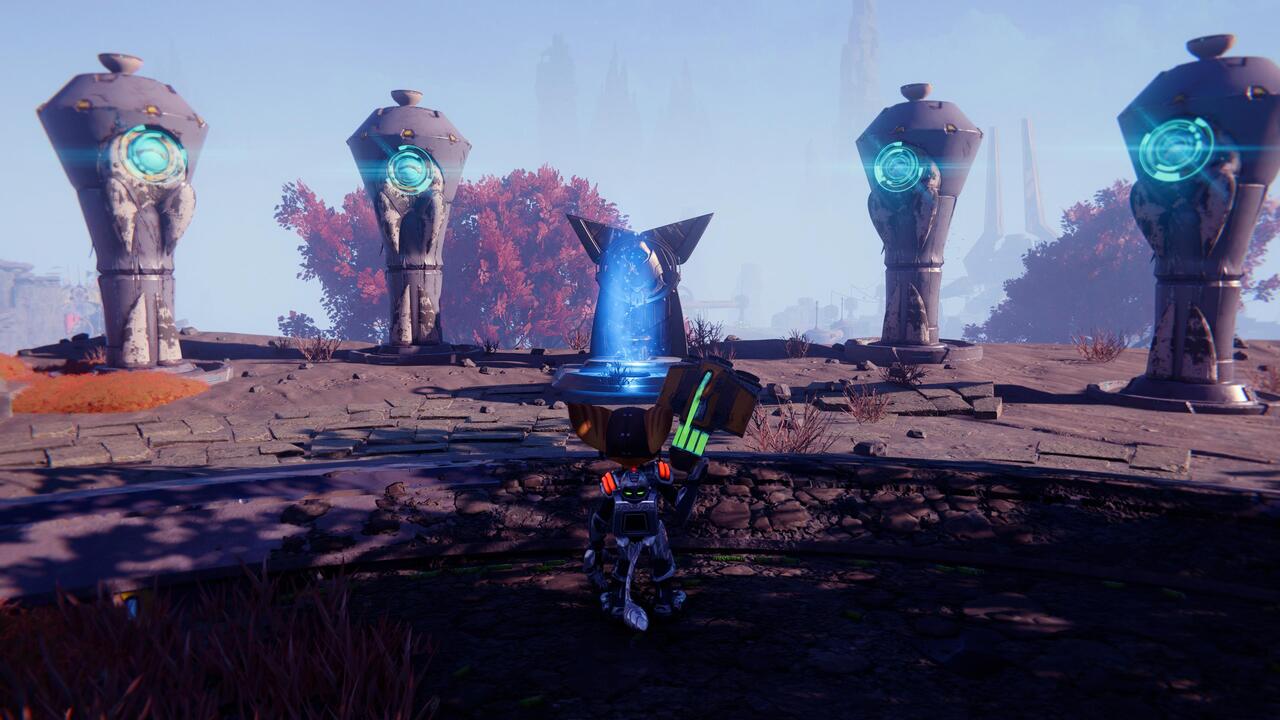 The ninth Lorb is located in the southern region of Savali. There are four pillars with blue lights on them, but one pillar has a red light. If you shoot the red light, it will turn blue but another pillar will turn red. It may seem like this is a puzzle, but it’s not. Just shoot the red light four times and the Lombax Shrine will reveal itself. 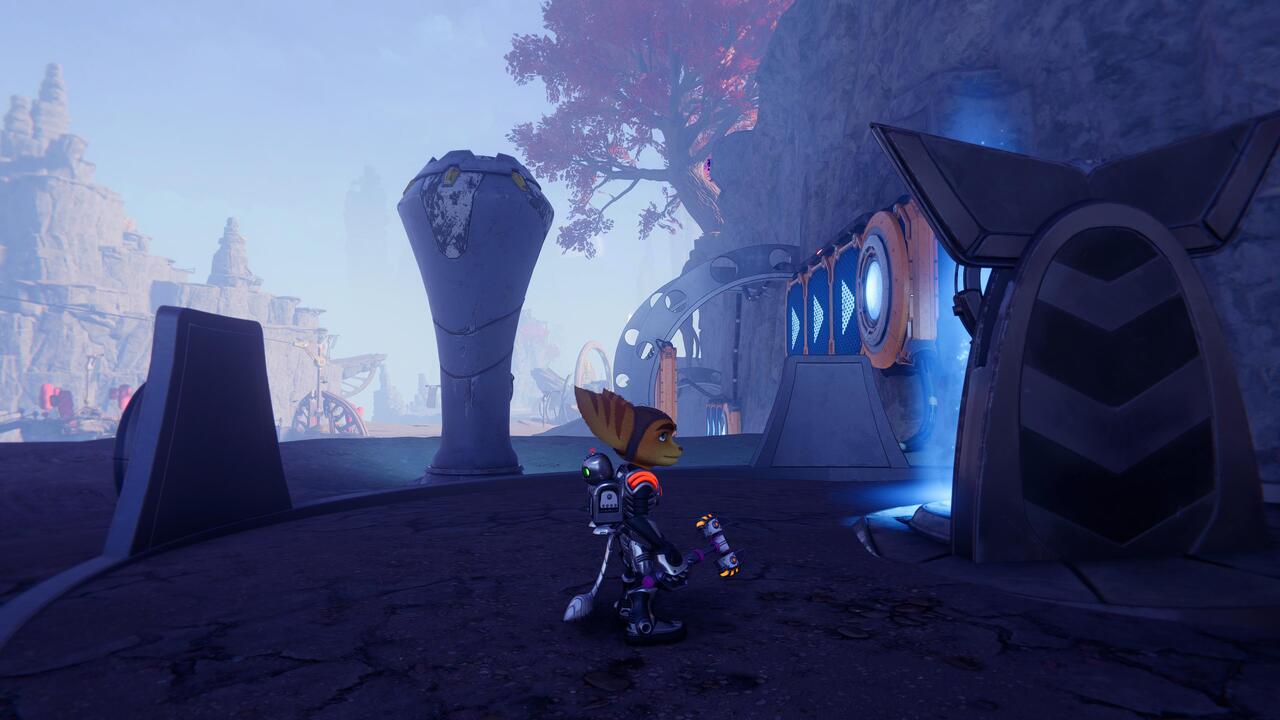 The tenth Lorb is located on the southern edge of the map. To reach it, you have to go around to the bottom left corner of the map near the three islands connected by bridges leading to the Mountain Temple. There, you’ll see wall running pads lined up along the cliffside to the east. Wall run along the pads, hitting every switch along the way, and you’ll reach the Lombax Shrine. 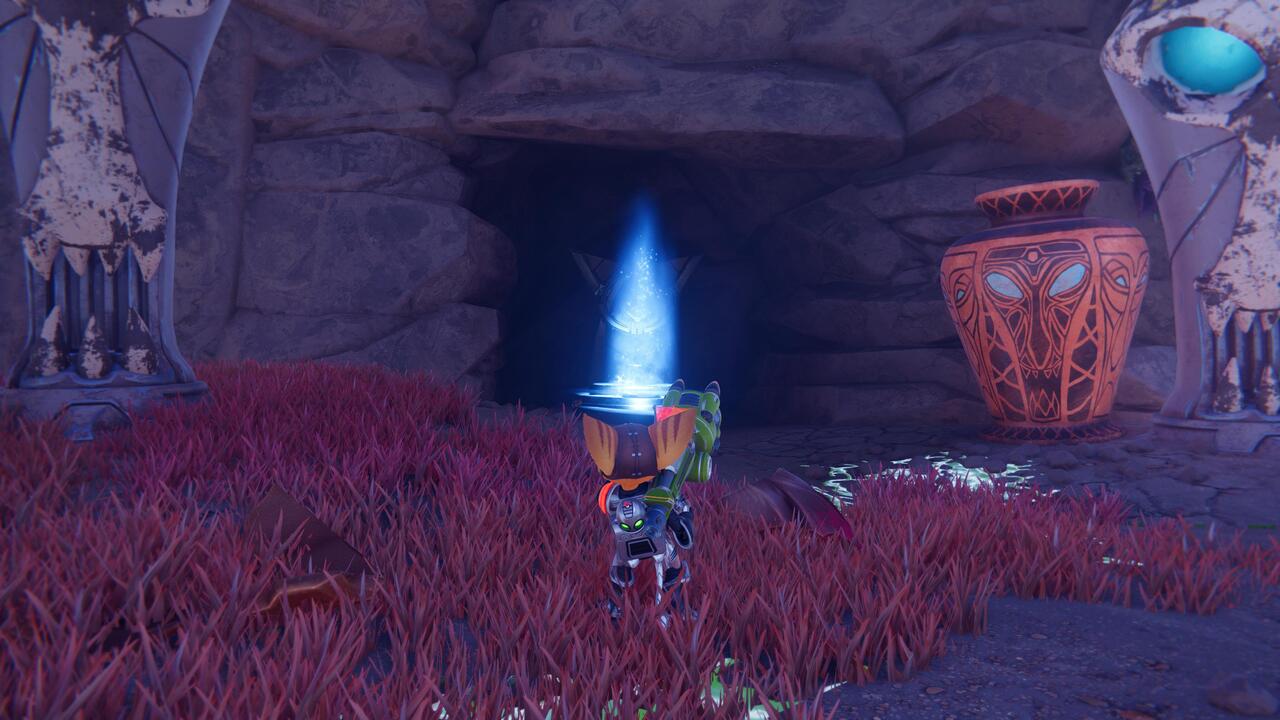 The eleventh Lorb can be found on the southeastern edge of Savali. You have to drop down off the edge of the map to a lower area in order to reach it. Once you reach the right spot, some enemies will attack you. Dispose of them and destroy the crates blocking the obvious cave entrance to find the Lombax Shrine. 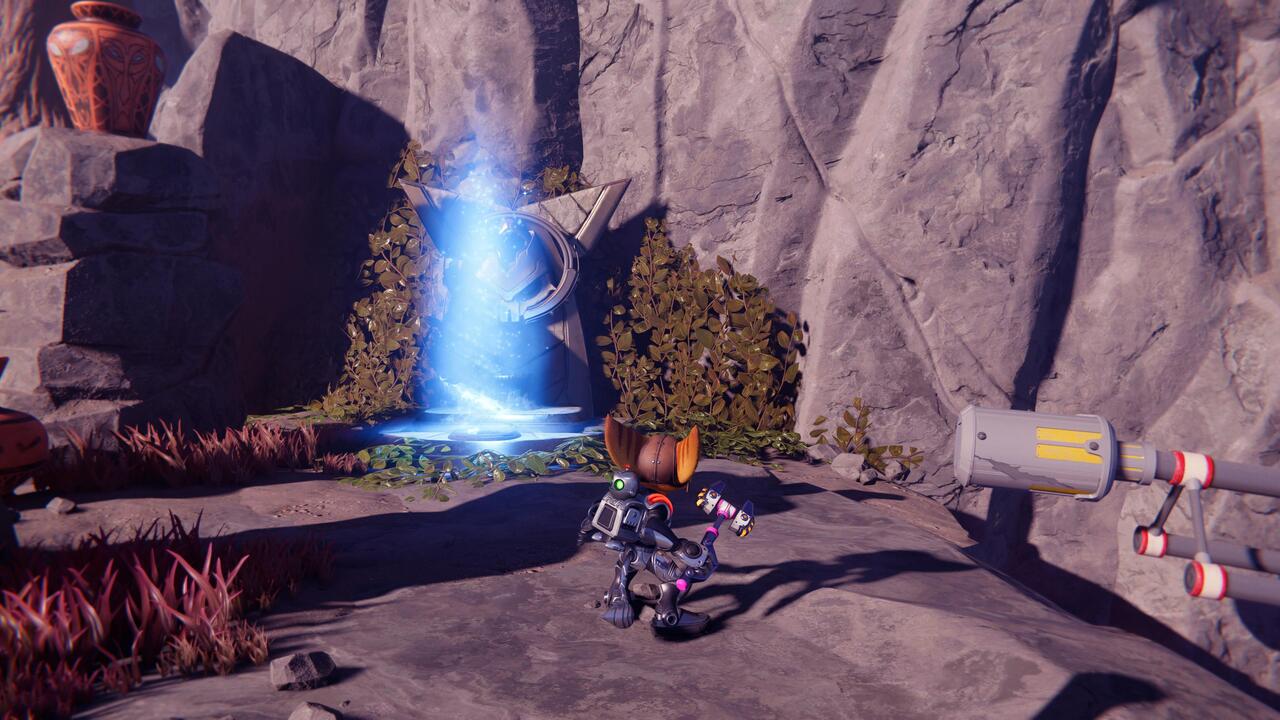 The twelfth Lorb is located on the southernmost island of the map near the Mountain Temple. When you first cross the bridges, turn right and head under the arch. You’ll see a few dimensional rifts. Grapple to them and then grind along the rail at the top to reach the Lombax Shrine.

Ratchet and Clank: Rift Apart is available now on PlayStation 5. Check out our review of the game here.