The Elder Scrolls Online Champion Points 2.0 – How Does the New CP Update Work

The more things change, the more they stay (somewhat) the same. The Elder Scrolls Online Update 29 (AKA Patch v6.3.0) has recently deployed to the PTS, and it includes the long requested Champion Points 2.0 overhaul. There’s plenty in common between the current Champion Points system and the upcoming CP overhaul, but the changes have been dramatic enough to throw all of our builds into disarray. In this guide I’ll break down the basics of the new system, so you can jump in with both feet once the Champion Points 2.0 overhaul debuts alongside Update 29 in March. Do consider that all information is from the v.6.3.0 PTS server, and is subject to change.

Champion Points 2.0 functions similarly to the existing CP system in The Elder Scrolls Online. You’ll still earn points from accruing experience after level 50, and they are still broken down into three categories. You’ll continue to assign your Champion Points into stars within a constellation to unlock passive stat increases, and there will be a cap to how much CP you can earn and invest. The basic principles behind the Champion Point system are not changing in Update 29, but the constellations and the stars within are a departure from the CP system currently in The Elder Scrolls Online. Let’s boil down the largest changes into an easy to read format: The Green – Craft – provides boosts to crafting, gathering, and trade, though it does feature stealth and thievery-oriented passives. The Blue Warfare constellation in Update 29 will host the majority of damage and healing augmenting passives, whilst the Red Fitness constellation will provide increases to health, regeneration, evasion, and other “tankier” stats. In other words, Warfare is for damage dealers and healers, and Fitness is for tanks, though all three roles will benefit from passives in each. It’s just easier to parse what passives benefit your build in The Elder Scrolls Online now.

We will continue to earn and dump Champion Points into these constellations once Update 29 goes live, but instead of earning a small statistical increase that diminishes with every point invested, we’ll instead have to clear certain point thresholds. For example, Tumbling in the Fitness tree reduces the cost of Dodge Rolling by 120 Stamina per stage. There are four stages total in Tumbling, each reached at 15 CP thresholds up to a cap of 60 (passives now have hard ceilings). So, at 15 CP invested my Dodge Roll will cost 120 Stamina less, but if I invest 60 CP my Dodge Roll will cost 480 less stamina. This change should make figuring out builds and Champion Point investments in The Elder Scrolls Online easier to understand. That said, not all of the passives in a constellation can be invested in from the start. Likes stars in an actual constellation, each passive is linked to another, and you’ll have to invest a small amount in some to unlock better, more powerful passive deeper within the constellation.

There are two final notes I want to go over before wrapping up this Champion Points 2.0 explainer. First, the CP cap in The Elder Scrolls Online will be raised to 3600 (up from the current 810 cap), and the experience curve will be adjusted to make earning Champion Points faster when Update 29 lands. Finally, there are currently two “sub-constellations” in the Warfare tree. Selecting these purple stars will zoom the screen in to a smaller constellation within the parent one, both featuring a handful of Active and standard passives with a specific theme. Zenimax has stated they intend to use these sub-constellations to further expand on Champion Points 2.0 as The Elder Scrolls Online ages, and the CP cap will rise as needed to support these. 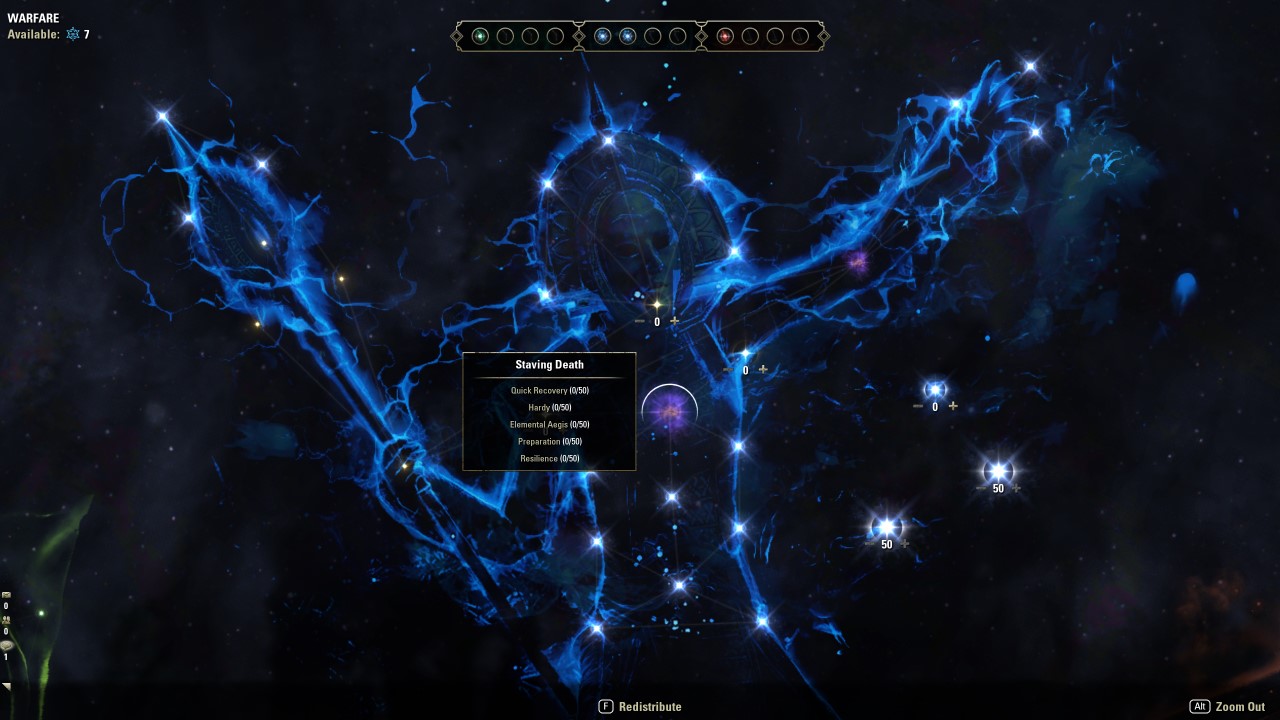