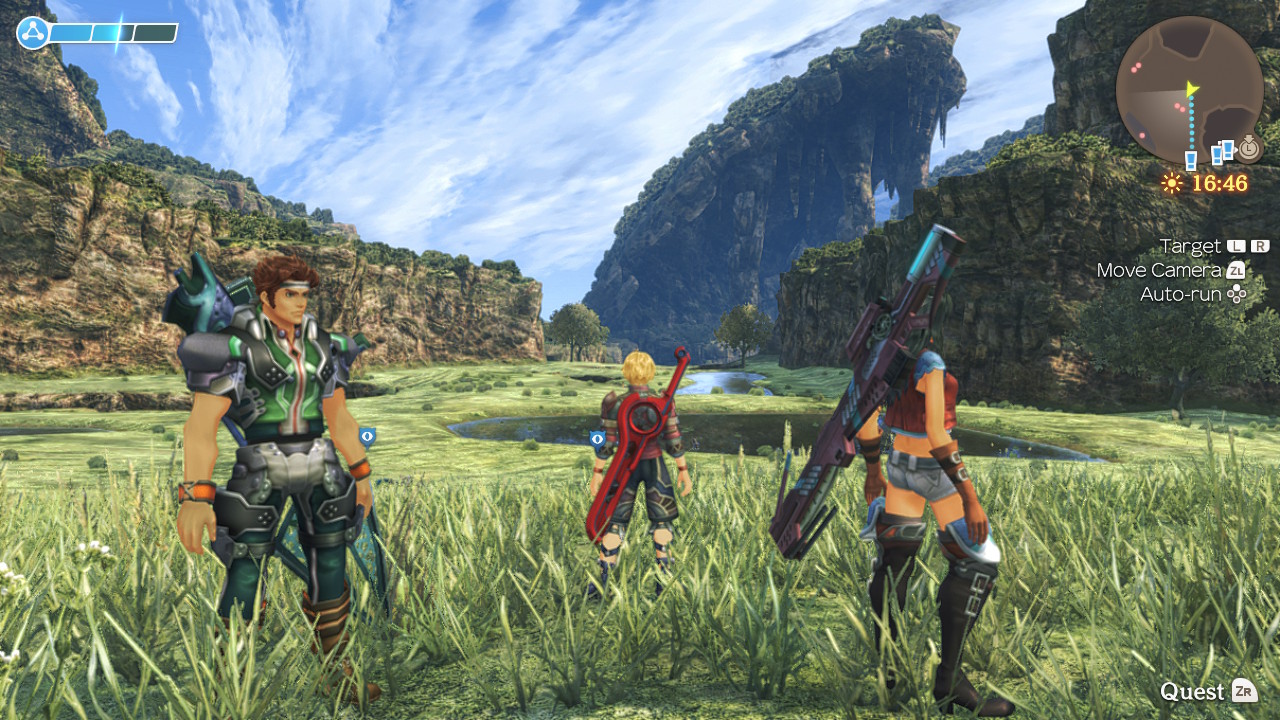 Affinity is an incredibly important stat in Xenoblade Chronicles: Definitive Edition. It measures the level of the bonds between your party members and characters throughout the world, and it has tangible effects on gameplay as well. Characters with high Affinity levels can share skills with one another via Skill Links, and increasing Affinity with NPCs can increase your reputation in an area and lead to more quests and better items through trading. This is a guide to Affinity in Xenoblade Chronicles: Definitive Edition, including the best ways to increase it.

What is Affinity in Xenoblade Chronicles: Definitive Edition?

Affinity is a representation of the relationship between playable party members and named NPCs throughout the world of Xenoblade Chronicles. Affinity starts at 0 for most characters and can be raised up to a maximum of 5000. There are five different levels of Affinity, each represented by a face with a certain color, and each of them is listed below.

According to the above list, Affinity levels can be ordered from Yellow<Green<Blue<Purple<Pink. Affinity can be viewed in the Affinity Chart available in the game’s pause menu. Increasing Affinity between playable characters has numerous benefits both inside and outside of battle. Skill Links become more prominent as relationships evolve, Gem Crafting becomes much easier, and several Heart-to-Hearts become available as party members grow closer. 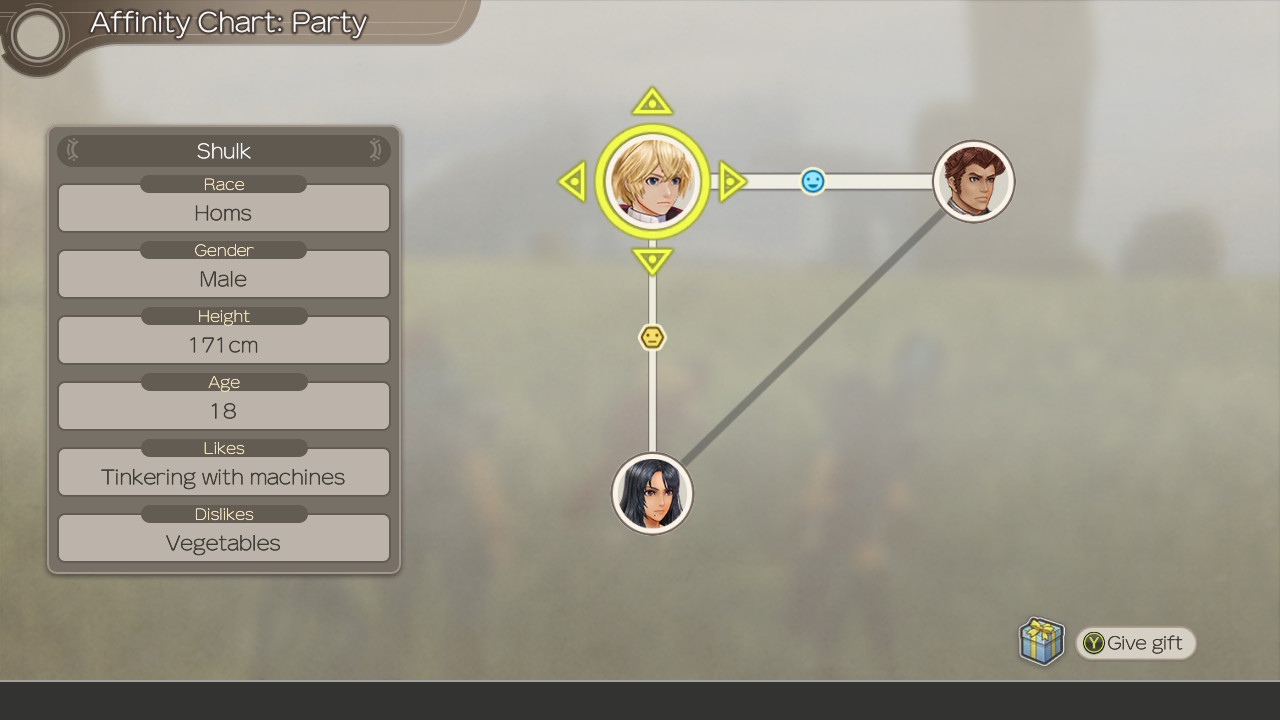 Affinity isn’t just restricted to playable characters. Named NPCs also have Affinity levels with one another, and these relationships can be improved by talking to them and completing their quests. Individual NPC Affinity levels don’t matter too much in Xenoblade Chronicles, but having happier characters in a given location will raise the party’s Area Affinity.

Area Affinity is a measure of your party’s Reputation in a given area, and it is measured on a scale of 1-5 stars. It can be viewed in the Affinity Chart in the game’s pause menu. In the screenshot below, I’ve done some quests for the folks in the Colony 9 Area at the beginning of the game, so Shulk and friends have a two-star Area Affinity there as opposed to the base one-star reputation level in the Colony 6 Area. As Area Affinity increases in a location, more quests will become available and NPCs will carry better trade items in their inventories. 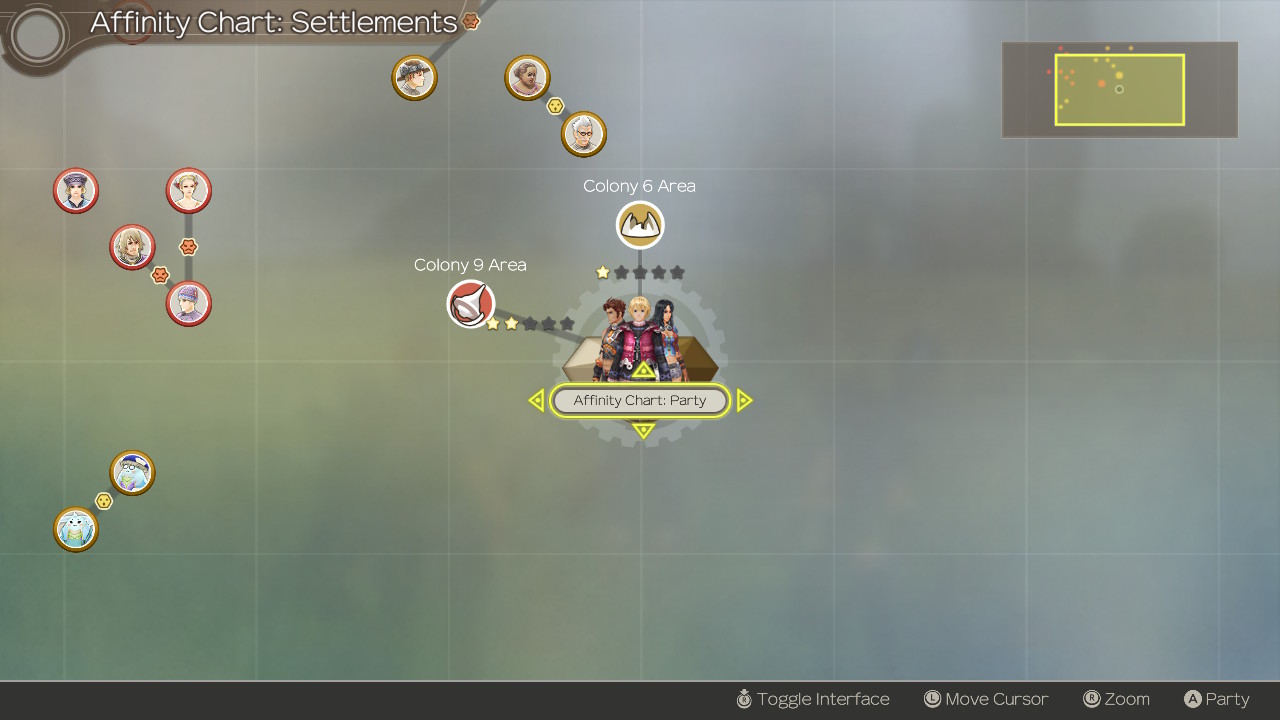 What Does Affinity Do?

Affinity has several benefits in Xenoblade Chronicles. Having higher Affinity levels increasing the chances of a Chain Link occurring during a Chain Attack, allowing the party to deal extra damage and extend their combo. More Skill Links also become available as characters grow closer, so party members can share unlocked skills with one another as long as they have a high enough Affinity. Heart-to-Hearts are also gated behind certain Affinity levels. Even in the starting areas of the game, there are Heart-to-Hearts that require party members that have yet to be unlocked and Affinity levels that are nearly maxed out. Check out our Xenoblade Heart-to-Heart guide for more details on those. Finally, characters with high Affinity will be more effective at Gem Crafting, which can result in better gems to slot into your gear. Also, as stated above, increasing Area Affinity in certain locations will unlock access to additional quests and rarer items when trading with NPCs.

How to Raise Affinity Fast in Xenoblade Chronicles: Definitive Edition

Practically everything you do will increase Affinity between your party members, but there are a few ways to raise Affinity fast in Xenoblade Chronicles. When you accept and complete side quests, your active party members will periodically chime in while you speak to the quest giver, and this increases the Affinity level between the party leader and that character. For example, if you’re playing as Shulk and Reyn speaks up when turning in a quest, you’ll see hearts pop up signifying that their Affinity level has gone up. This only works with active party members, so be sure to cycle between everyone to keep the party’s Affinity high.

To quickly increase Affinity outside of combat, you can give presents to other characters. Some characters prefer certain items over others, and giving someone the wrong item can actually decrease their Affinity in some cases. To give presents in Xenoblade Chronicles, go to the Affinity Chart and press the Y button. Then, you can select the gift you’d like to give as well as the recipient. Another way of increasing Affinity outside of combat is by selecting the correct dialogue options during Heart-to-Hearts. Although you need certain Affinity levels to view some Heart-to-Hearts, saying the right things during these encounters can give your characters a nice extra Affinity boost.

During combat, Chain Attacks are an excellent way to increase Affinity amongst your party members. A successful Chain Attack increases Affinity for everyone in the party. Also, anytime a button prompt for the B button shows up on screen, press it. These prompts signify Burst Affinity, which is a fancy way of saying you can cheer your party members on if they dodge an attack, land a critical hit, or do anything else special during a fight. Reviving a downed party member or encouraging an ally with the B button when you’re near them is another way to get a small boost to Affinity.