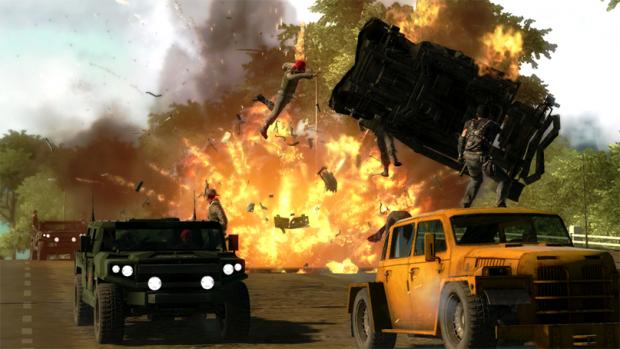 Two years after release, Just Cause 2 still manages to log over 100,000 unique players each week, with some putting in over 200 hours of game time. While giving players the ability to explore a vast set of tropical islands with unprecedented player freedom undoubtedly plays a role in the game’s longevity, Avalanche Studios boss Christofer Sundberg tells Eurogamer that the title’s success is due to the fact that Just Cause 2 is a polished and deep game which hasn’t attempted to screw gamers out of money with cash-grabbing DLC.

“DLC is not needed to keep players engaged if the game is well executed,” he said, going on to state that developers and publishers “run around as headless chickens” trying to squeeze every penny out of gamers through the concept of add-on content:

“We create a game allowing players to properly explore and have fun and not focusing so much on the actual end goal of the game. As most publishers and developers have run around as headless chickens the last three years looking for a way to make money DLC was definitively a tool to try to keep players engaged, but how many games have been truly successful with DLC? Not that many.”

Sundberg noted that although Just Cause 2 saw minimal DLC, the content was restricted to aesthetic items and weapon/vehicle packs, and that it was the launch product itself that has kept players engaged.

“I like DLC, but the DLC we released for JC2 was standard stuff and they haven’t helped keep the players motivated to keep on playing. It was the game itself. The big thing now is to force multiplayer into games that are really single-player games just to combat second hand sales and that makes absolutely no sense as it just consumes budget and does not add any value except on the back of the box.”

The Avalanche boss added that DLC can in fact add value to the core experience of a game, but that very few developers as of late have managed to employ the content successfully and instead resort to adding on “crap” that they weren’t able to include with the game at launch:

“Proper DLC that adds VALUE is great but so far very few games have motivated me to actually pay for the DLC. I’ve just paid for the crap that developers decided to cut because they didn’t have the time to get into the game. ‘We save that for DLC’ – famous last words.”

Sundberg concluded by boldly commenting on what he sees as pure speculation within the industry in regard to the future of games distribution, saying, “I do not believe in the death of consoles and the bright future of F2P.” Though Sundberg’s comments may not sit well with those involved with the iOS and F2P models, there is unquestionably truth in his statements. Analysts and developers alike have contributed their “two cents” as to how the decline of the console era is imminent and the era of iOS and free-to-play is on the rise, though the only certainty the industry currently holds is uncertainty.