The latest news in the world of video games at Attack of the Fanboy
October 17th, 2015 by William Schwartz 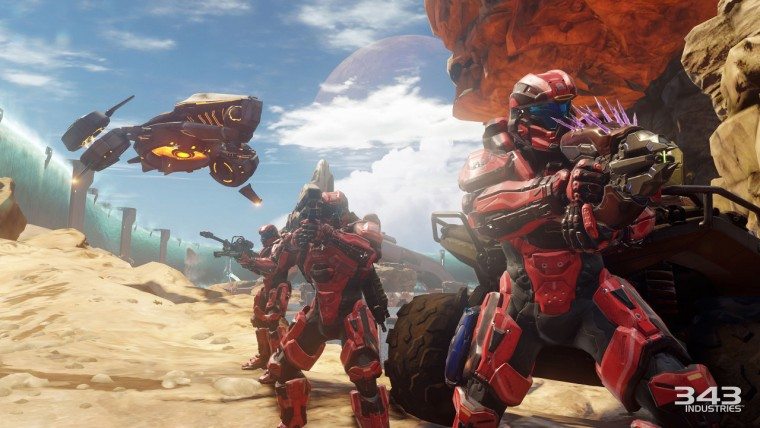 With a little under 10 days until Halo: 5 Guardians’ release, developer 343i have detailed several systems relating to the Arena multiplayer.

In order to ensure even and competitive matches, 343i have introduced the Competitive Skill Rating (CSR) system.

“When you first hop into any of the Arena playlists, you will play a series of placement matches before being earning your CSR. After you complete 10 games, you will be placed into one of 7 CSR ranks based on your performance. Coming out of the Arena beta, we’ve renamed the ranks based on community feedback to provide a more familiar and easily understood sense of progression between ranks. The final CSR ranks for Halo 5: Guardians are Bronze, Silver, Gold, Platinum, Diamond, Onyx, and Champion.”

343i stress that the only way to increase your rank is by winning matches. What does this mean? Well, the hope is that players will work together in the team-oriented playlists to ensure their team’s victory, rather than focusing on their own score.

“Whether you drop 30 kills in a game of Slayer or single-handedly capture every flag in a CTF match, wins are the only way to improve your CSR. As you win, you will progress through the 6 tiers of your rank. If you are skilled enough to continue winning at tier 6, you will advance to the next rank (yay!). Losing games will cause your progress within a rank to decrease, but you will never drop down a whole rank from losing. For example, if you spend all month working your way into Silver, losing won’t drop you back to Bronze.”

Nobody likes joining an unbalanced, laggy game, but 343i insist that this won’t be commonplace in Halo 5: Guardians.

“Finding a balanced, low-ping match is of the utmost importance when playing Arena. Halo 5 is designed to have a high skill ceiling, and we know how frustrating it can be to play with or against players who aren’t at your skill level. We prioritize match quality above all else when finding matches in Arena. We begin by trying to find other players that are at your exact CSR. If we can’t find enough players, we very slowly open up this limitation and look for players that are around your same skill.”

343i also state that you’ll never join a match that’s already in progress, ensuring that your CSR won’t be unfairly implicated by joining a losing team halfway through.

“Since joining a match in progress is disabled for Arena matchmaking (still available in Custom Games and in Warzone), quitting out of a match damages the quality and experience for the other seven players in that match. Leaving your teammates high and dry is not cool. If you quit out of games, not only will you suffer a loss and forfeit any REQ points or XP but you’ll also receive a temporary cooldown penalty (ban) preventing you from matchmaking in Arena.”

Finally, 343i detailed how they’ll be locking down on any players behaving in a negative manner.

“To maintain the quality of the Arena experience and sanctity of competition, a number of rules are in place for all Arena playlists. Halo 5: Guardians is engineered to detect and track the following behavior:”

“If you repeatedly engage in negative behaviors such as the ones listed above, you will receive a ban and be prevented from entering matchmaking. The duration of each ban is dependent on the offense and becomes more severe with each successive infraction, so continually killing your teammates to steal the Sniper Rifle will quickly lead to long timeouts from matchmade play.”

To check out the full list of details, head on over to HaloWaypoint.