After the Hype: Crysis 2 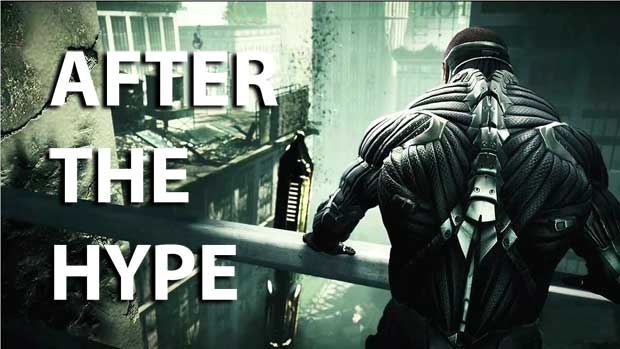 Let me start off by saying that I was a big fan of Crysis 2.  It was a day one buy for me (Xbox 360) and I have no regrets.  That being said, after spending some quality time with the game, as much as I was impressed, I see far more potential to be had.  I am happy too, because it shows us that there are more great things to come from both the Crysis series, and CryEngine 3.  Below are some of the things that I think Crysis 2 did very, well, in addition to some of the things it needs to improve.

1. The Nanosuit: Shooter gameplay was getting pretty stale in my books until Crysis 2 came along.  The nanosuit added an entirely new dimension to the game in both strategy and scope.  How do I want to kick ass today? Straight up gun on gun?  Stealth take-downs?  Kicking cars into enemies?  Throwing crap at people?  Jumping on people? All fun, all the time. The harder the difficulty, the more fun it was.

2. Sandbox battlefields: During the single player campaign I salivated every time I was notified “tactical options available.”  The maps were large enough to give options, yet small enough to keep focus.

3. Size and scale: Bigger is better in Crysis 2.  The sense of visual scale in the game was very impressive.  I often myself only half listening to dialogue while I took in the sights of each level.

4. Multiplayer: I easily spent 25 hours on the two versions of the Crysis 2 demo on the 360.  That says a lot, since most full games don’t give me that kind of  shelf-life.  The freshness the nanosuit really makes Crysis 2 one of the most diverse and unique FPS multiplayer out there.  I also find the lag to be negligible compared to other shooters (COD), which is a big bonus.

5. Graphics: The best on any console right now.  Not only are graphics stunning, but level design and art direction are just phenomenal. In a genre saturated with beige and greys, Crysis 2 is a breath of fresh air.  Plus, the lighting effects in this game have no peer when it comes to quality.

1. Pop-in: This is not a game-breaker by any means, but it is noticeable, especially in multiplayer.  If this can be fixed, Crysis 3 will be a console beast.

2. Story: As far as shooters go, it was decent, but I hope Crysis 3 focuses more on making a good story and developing some characters.  I feel that a good game is made up of a combination of 1. solid game-play (stability, mechanics, variety, etc), 2. graphics (stability, art direction, etc), and 3. story (characters, plot, etc).  I think Crysis 2 lacked the latter.

3. Vehicles: If Crysis 2 had the effortless vehicle combat like Halo or Battlefield it would be hard to beat.  The current vehicle offerings are a good start, but I would love to see it expanded upon, especially in multiplayer.

4.  Enemy variety: I loved the enemies of Crysis 2, but like many shooters these days, some increased variety would be great.

At the end of the day, Crysis 2 is a must have game for any fan of the sci-fi or shooter genre.  In many ways this is an immensely impressive game for it’s graphics, art direction, scope, and game-play.  However like most games out there it is not perfect, especially in the story department.  Crytek could really make Crysis 3 a great game with a bit more polish and more emphasis on quality story and character development.  Still though, it makes you think that if Crytek’s first console offering is this good… Crysis 3 should really be one to watch for.