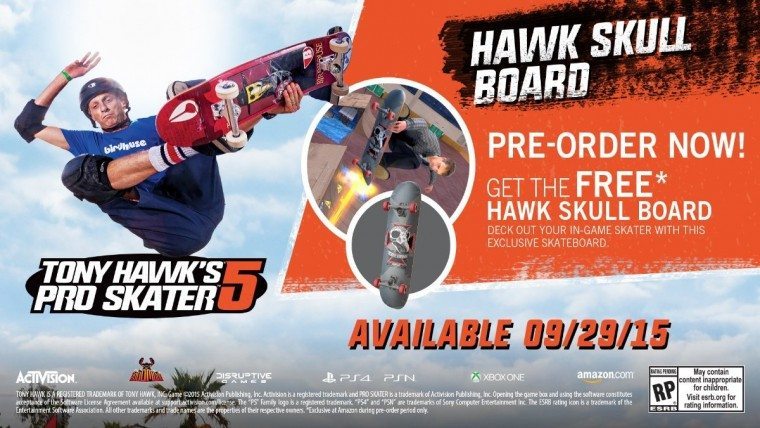 Amazon has revealed a small pre-order bonus you can get if you purchase Tony Hawk’s Pro Skater 5.

As an Amazon exclusive, people that pre-order Tony Hawk’s Pro Skater 5 from the retailer will receive the “Hawk Skull Board”. It’s available for the PS4 and Xbox One versions of the game only.

This special board can be used in all levels of the game and in all games modes. It also has a unique design with its on effects trail too. If you want to stand out from the crowd, this board will allow you to look different.

Amazon will email the code for this pre-order bonus two business days after they ship out the game to you. Be sure to check your email inbox to see if they code has been sent to you successfully.

If you plan on buying the PS3 and Xbox 360 version of Tony Hawk’s Pro Skater 5 from Amazon, there’s no pre-order bonus waiting for you sadly. Not to mention the release date for the last-gen version is November 10th in lieu of September 29th on the newer consoles.