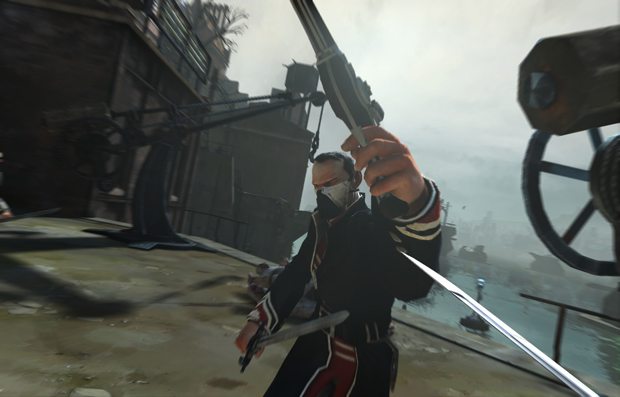 Dishonored was just recently announced to be an upcoming stealthy action game from Arkane Studios. The one lone screenshots shows of very little about the new game, but from what we can see is that both the player and the other character are holding swords.  It also appears to be set in rather neutral looking industrial setting.  The game is said to be built around playing the role of Corvo, your’e a legendary bodyguard for ‘The Empress’.  You’ll find that you have been falsely accused of and imprisoned for her murder.

It’s a game that is built around the art of being a stealthy player, but Corvo is also a very adept warrior, so when the gloves do come off, expect fireworks.  As Game Informer reports, where dishonored stands out is in it’s combination of many things that gamers are accustomed to but adding a new twist : the ability to mix, match, and combine the elements of the game for different effects.

Dishonored has several major elements that combine to create its unique gameplay: mobility, powers & gadgets, environment, and AI. The trick is that a single power doesn’t just do damage or heal you. You can combine them organically to create interesting effects. Stop time and knock a bunch of stuff off a table in one direction then book it in another, so the guards search for you in the wrong place. Summon a swarm of rats to attack one guard, but possess one of the rats and escape in the chaos. Every problem has as many solutions as you want it to.

It’s an assassination game that reacts to how violent you are. An unusual “chaos” system tracks how much collateral damage you cause, and the game world changes as a result of your actions. Unlike a light/dark side meter, though, it’s a behind-the-scenes element that affects story decisions without punishing the player or pushing them to play one way or another.

As it sounds so far, Dishonored sounds like a first person Assassin’s Creed style of game, with a bit of the inFamous franchise thrown in for good measure.  We’re looking forward to hearing more about this upcoming game in the near future.