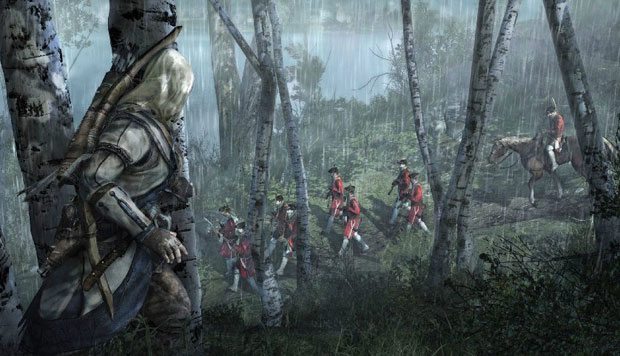 According to Ubisoft, Assassin’s Creed III is aiming to bring a “next-gen look” on the current generation of consoles.  How this is going to be accomplished is anyone’s guess, but in a recent interview with Game Informer Alex Hutchinson spoke with the magazine about this ambitious new project.

Following the reveal of the upcoming game, Hutchinson sat down with the magazine to explain.  “It’s a scary thing to say, but I think the goal was to look next-gen on current-gen,” said Hutchinson.  “We have this goal to do something completely new, but still remain true to the franchise.  People want familiarity, but also something radically new.  So we have the familiar pillars of fighting, navigation, and social stealth, but brand new environments and brand new ways to use them and extend them.”

Of these brand new environments, trees will play a large part in Connor’s tactics.  “There are plenty of games with forests, but the forests are just collections of assets; you walk around them…Whereas if we can make trees and wilderness as much a playground as Altair and Ezio made cities, then it’s huge.”  An obvious contributor to this next-gen feel I would think.

Whether or not Ubisoft will be able to convey that sense of a next generation game on current generation consoles is yet to be seen, but from the looks of it, Assassin’s Creed fans are in for a treat with the new scenario, protagonist, and Assassin’s Creed III which arrives on October 30th for all major consoles.