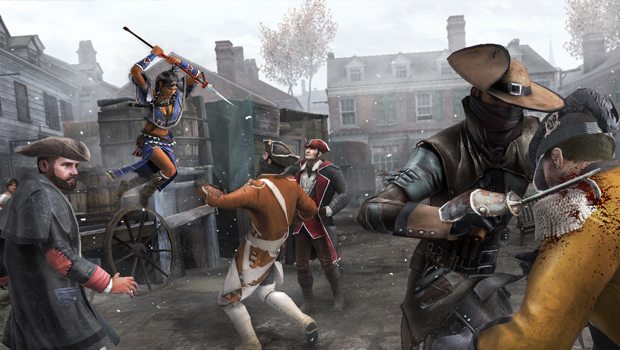 When Assassin’s Creed III hits stores in October, you’ll still be able to take great pride and amusement in stabbing your unsuspecting buddies in the back via the game’s competitive multiplayer mode. What you’ll be able to do for the first time in an Assassin’s Creed however, is work together with those same friends in taking out NPC targets. For many of you, it might not be as fun as killing your pals, but the new co-op mode is looking as if it’s shaping up nicely.

In “Wolfpack,” two to four players are challenged with a sequence-run of assassinations. Finding the target works much like the competitive mode’s system does in which you’re given an image of your next victim and the circle radar appears. The mode offers 25 assassination “waves,” working like a “horde” mode to an extent with a lot more subtlety and a lot less running-and-gunning. Each wave becomes harder to complete, and teams gain point boosts for killing correct targets in synchronization. A timed clock ticks away the longer you take to eliminate each victim, and for each incorrect kill, the actual target will come by and incapacitate you for a short period, letting precious seconds dissipate.

While the campaign and backstory of new protagonist Connor still has the majority of our attention for Assassin’s Creed III, “Wolfpack” certainly seems like a unique addition to the franchise’s otherwise lacking multiplayer. If it looks and plays as good as it sounds, players will be able to take a refreshing and compelling break from killing their friends.