Assassin’s Creed Syndicate Will Have Three Collector’s Editions, No Steelbook For North America 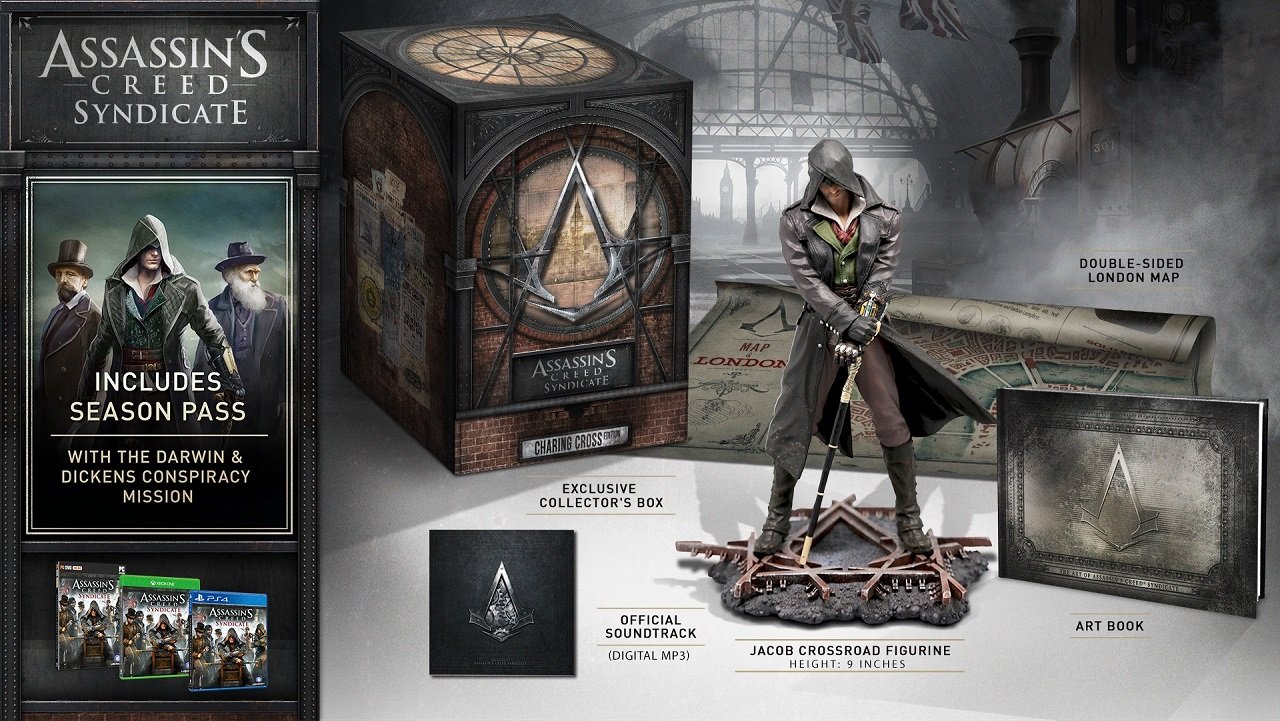 Assassin’s Creed has history of grandose collector’s editions and it appears that Assassin’s Creed Syndicate is not bucking that trend. However, it is a bit disappointing that North America won’t even be getting a steelbook.

The collector’s editions of the game can be checked out via Ubisoft’s website itself, however it seems all the editons are Ubistore exclusives. These editions are special as they come with phsyical trinkets and other such things and should not be confused with the earlier announced Standard and Gold Editions.

Now the UK on the other hand have a selection of three Collector’s Editions on top of the two regular and Gold editions. Starting with The Rooks Edition which includes everything in the regular edition, an extra train mission dubbed ‘Runaway Train’, an exclusive collector’s box, artbook, soundtrack and double-sided map of London. Check it out below. 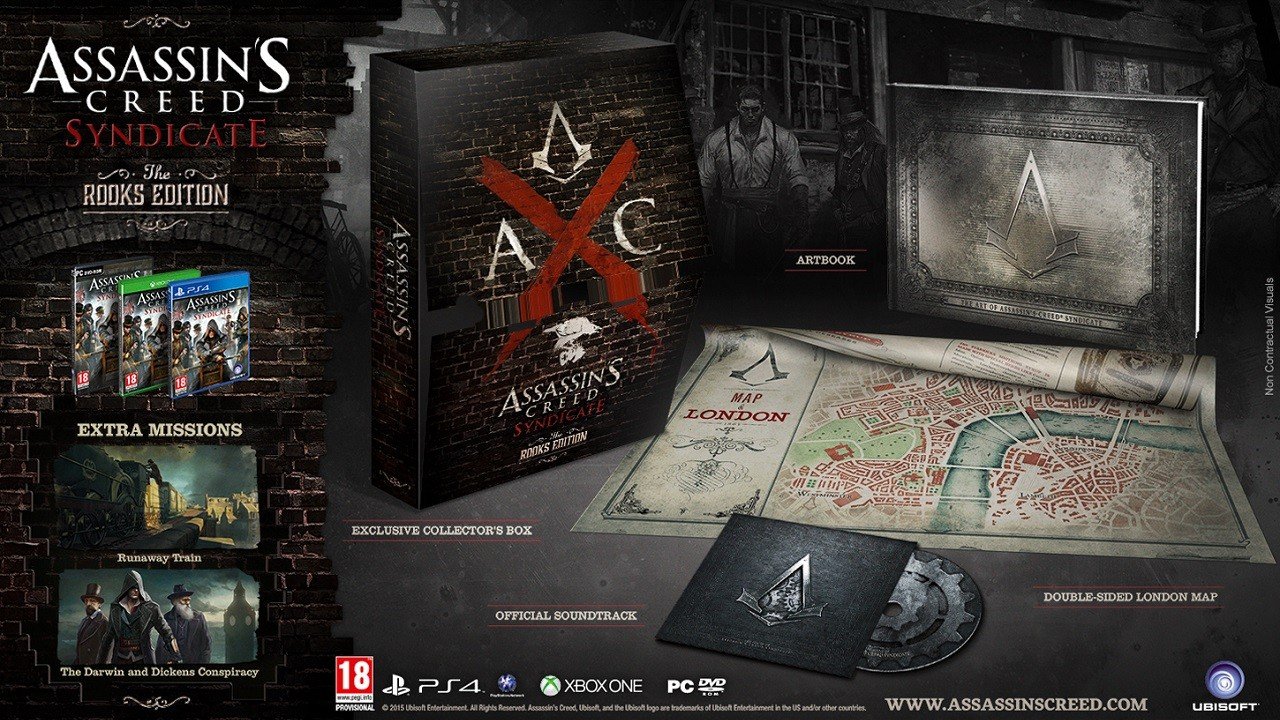 The one that really grinds my gears though is the Big Ben Collectors Case, because not only does it have everything the North American Charring Cross Edition (which is also an option in Europe), but it also includes a different stand for the Jacob statue, an exclusive numbered lithograph, an Assassin’s Creed Syndicate flask, a collector’s box to store it in and a steelbook. Gawk at it below fellow North American purchasers. 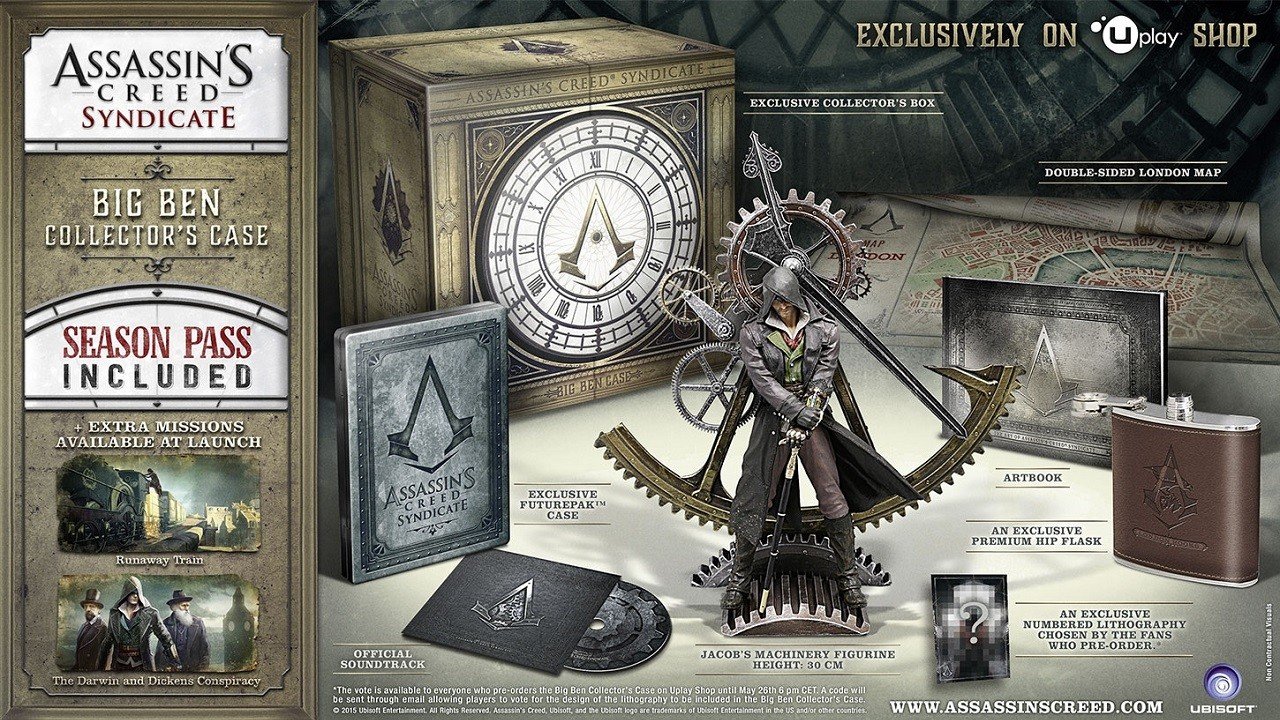 Now it hasn’t been announced for North America and most likley won’t but it is a bit disappointing that fans abroad won’t be able to enjoy a steelbook to house their game. It seems a pattern that the North American collector’s editions seem to pale in comparison to our brothers across the pond. At least we can purchase Jacobs Hidden Blade replica and his Cane Sword at Gamestop or Amazon, right?

Assassin’s Creed Syndciate is set to release on Xbox One and PlayStation 4 on October 23rd and later in the year for PC.