Back to Karkand, Battlefield 3 Returns to Wake Island 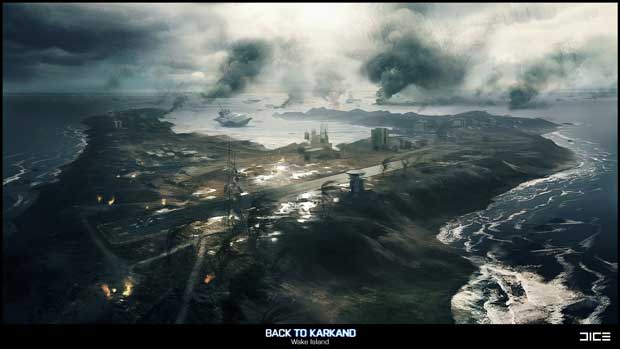 Four of the best Battlefield maps of all time are going to be completely redone for the upcoming Battlefield 3: Back to Karkand DLC.  Of the fan favorites, Wake Island which originated in Battlefield 1942, will be one of those maps included in the content which comes with all pre-orders of Limited Edition of the game.  In a recent post on the Battlefield Blog, one of the developers talks about the task at hand in re-creating one of the most popular maps in the franchise.

It’s a weird mix of pressure in staying true to the heritage of Wake Island, while at the same time having new and exciting possibilities thanks to the Frostbite 2 engine.  I feel that we have a shot at making our own unique interpretation of Wake Island. The map has seen so many iterations through so many games that we don’t feel constrained by some hard-coded template of what it must be.

The basic premise was that we looked at how real-life Wake Island [from the Pacific Theatre in WWII] looks today. We knew we couldn’t do it to scale, but that kind of one-to-one fidelity wasn’t really of interest to us. Funny thing is, it was in fact downscaled so much due to a decimal error in programming. The map was originally meant to be bigger, but the involuntary downsizing created a very cool and concentrated gaming experience.

That concentration also comes from the fact that when fighting on land, because of the island’s U-shape, you cannot escape. If there’s a tank in your way, you will have to confront it head-on sooner or later. That’s something we have tried to recreate throughout the Battlefield series: To have some kind of clear frontline.

The Battlefield 3: Back to Karkand expansion is being developed by the same team that worked on Battlefield: Bad Company 2’s Vietnam expansion.  The content includes four classic Battlefield maps, as well as unique vehicles, weapons, and unlockables.  To get the pack when the game launches this fall, you’ll need to pre-order the Battlefield 3: Limited Edition.