We spend some quality time with DICE's upcoming shooter. 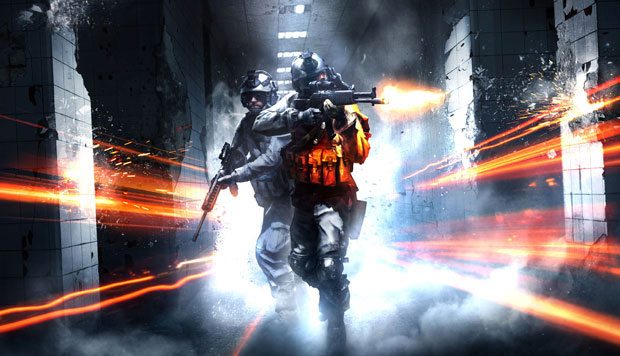 For a game that is still months away from release, I’ve played a pretty considerable amount of Battlefield 3.  Earlier this year at E3, I got the chance to play but was a bit uncertain if the actual game was living up to the ridiculous amount of hype.  I then got into the Battlefield 3 Alpha, which gave me ample opportunity to examine all the facets of the game.  They do call it an alpha for a reason, the game was definitely not without its problems.  Still fiddling around on the Operation Metro multiplayer map, there were some distinct balancing issues that gave advantages to the defenders over the attackers.  I think in all my time with the Alpha (all of two days), there was only one or two instances where the attackers were able to overcome the defenses.  I attributed this largely in part to DICE not including the squad spawning mechanic.

Fast forward a month or so, and here I am sitting in a room with my fellow “journalists” to drink, be merry, and of course, frag each other.  We started out in familiar territory, in the open park area of the Operation Metro: Rush gametype.  Playing on what is likely an extremely high powered PC, the game looked fantastic, and we had all of the adornments of an MLG pro.  For me, this is pretty much my setup at home, so I felt in a natural environment.  Having played a good deal of Battlefield Bad Company 1 & 2 this generation, I am very comfortable with the core mechanics of the Rush mode.  It’s one that highlights the importance of team play, and lets face it, that’s what Battlefield has always been about.

All classes were available from the onset, I of course chose the support class.  Having been on the receiving end of the new suppressive fire feature in the game, I knew how helpful it can be to have the ability to pin a group of soldiers to an area with the awesome firepower afforded the Support soldier.   Using the bi-pod and the LMG, you can cause some serious unexpected hiccups in even the best laid plans with the Support class.  On first shot at this, DICE has managed to create some unique gameplay mechanics that differentiate Battlefield 3 from any other first person shooter.  Being on the receiving end of a well used support class will both scare the living daylights out of you, and force you to choose an alternate route.  It can be a game changer, plus it’s simply alot of fun to see someone scurrying to get away from your fire while then getting the satisfactory take-down, or better yet, the assist that results from another team mate taking this disoriented enemy down.  For me, the first time I was on the end of someone laying down suppressive fire on my position, I found the best use of the new going prone feature. As a hail of bullets whizzed overhead, I crawled myself to safety, something you simply couldn’t do before.

The franchise has always had its roots tied deeply to the team experience, but never have they rewarded you so well for your efforts.  There’s a comprehensive system of unlockables that has many tiers of awards.  The pins, dog tag, and unlockables for guns and equipment, are all tied to different things you should strive to accomplish on the battlefield. Natural achievements that will come as you do the things that are necessary for your team to win, reward you for doing the right things. The system is intuitive. You’ll earn points for straight kills, reviving fallen teammates, spotting enemies, and offering assistance to your squad in many different areas. Some of these things are familiar, others not so much.The new rewards feel like a solid expansion on the Battlefield Bad Company points system. While I didn’t get much of a chance to see how this has changed since alpha at Pax, what I had seen in the past was more than enough to show me that there has been some serious consideration put into the leveling for the game.

While our time was short with Rush mode at EA’s PAX event, I did notice that the game still felt a bit unbalanced from an attackers and defenders perspective.  The attackers definitely seemed to be at a natural disadvantage, but considering the fact that none of these players really played with each other before, there was probably some trouble in organizing a strategy.  Also the spawning system has been completely changed, according to Daniel Matros.  My evening started to get somewhat fuzzy as we concluded our play sessions (thanks Kettle One), but I do believe that Matros confirmed to me that spawning would be handled by a device which allows squad mates to spawn on you.  It’s a perk that must be used, and not a given feature in the game.  Without the device, you would be confined to spawning in designated areas. Whether or not anyone knew this while we were playing, I’m not sure.  I know I was unaware.  The attackers made it as far as the third area before being turned back, and I had the opportunity to also try the sniping class, which I was familiar with from the alpha.  This is one area, that is a bit of a sticking point for me.  I haven’t gotten the chance to play with upper level sniper rifles, and the ones I have played with feel like they have been specifically nerfed to separate the men from the boys so to say.  This could be to avoid the problems that Battlefield BC 2 had, where a large segment of players used the snipers  and camped with little concern for their squadmates or objectives.  In Battlefield 3 this has also been remedied by the flash of the scope lens. This flash can definitely give a snipers position away if they stay in one spot for too long.  In Rush Mode, my take away from all of my playtime with the game is that there is more balance and consideration in all of the classes of Battlefield 3 than in any previous Battlefield game.

As we moved from the Rush Mode, we entered Team Deathmatch.  Now Deathmatch doesn’t look any different or play any different than the Rush mode, however it’s a much more hectic pace when you take into consideration that their are tighter confines placed on the player.  With killing your enemy being the primary objective, there’s a bit of a different strategy than in other modes.  It’s going to come down to a matter of preference for most, when you take into consideration that no vehicles will be featured in the Team Deathmatch playlists.  Some other new features do come to mind when playing the new mode, namely the new vaulting mechanics and melee abilities that take center stage in TDM.  Since the focus is on a much faster, and less deliberate style of play, you get to see the game flowing quite well with guns, melee, and the added mobility from the new vaulting animations.  Whether it can scare up some CoD fans with its uptempo pace is yet to be seen, but it certainly doesn’t lack in intensity.  The added sheer awesomeness of the Frostbite 2 Engine makes any of the modes that much better in both the eye candy and gameplay departments. It’s just worth noting since I haven’t even touched on the brilliant visuals of the game, mostly because you can watch any video and confirm that game indeed looks quite good. Battlefield 3 is near photo-realistic on the rigs we played on, with a strong emphasis on the presentation in both the audio and visual formats. This next generation of destructive technology is quite something to experience in real time. With cover slowly chipping away as you have an enemy firing round after round at you, Battlefield 3 can be a harrowing experience.

I left the Battlefield 3 event with more excitement than ever for the first person shooter which is due out in late October.  The funny thing is, I’m not excited about the same things that initially piqued my interest when the game was announced earlier this year.  Those things: the jets, tanks, helicopters, single player, co-op, and other features, are going to be as we say in New Orleans, Lagniappe. A little something extra alongside an exceptionally well polished and thoughtful game from the most basic levels.