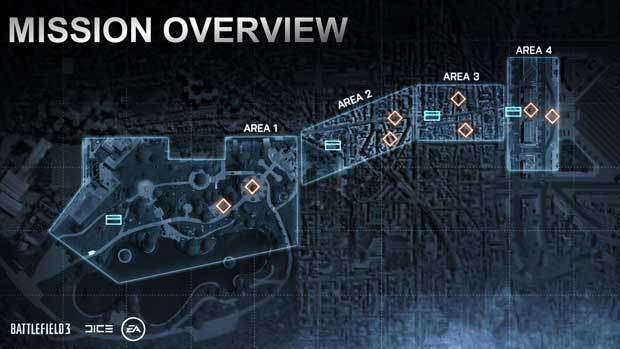 In Battlefield 3 the large sprawling maps are key to distinquishing itself apart from competing first person shooters.  Any one map on DICE’s upcoming shooter can feature close quarters, open areas, and everything in-between, as the map is opened to players as objectives are completed.  There is a  “seamless transition” (in rush mode) in the map between these contrasting areas” said DICE’s Lars Gustavsson in a recent interview.

In Rush Mode, players attack and defend objectives, pushing from area to area in the process.  As you can see by the diagram above, starting in area 1 on “Operation Metro”, attackers much diasable the key points represented by the orange markers.  Once disabled, attackers will push on to area 2, and defenders will now be tasked with defending the next area until the either the attackers are stopped (by diminishing their troop count to zero) or they disable all objectives.

This map progression is definitely one thing that set the Battlefield Bad Company series apart from other shooters.  With the Rush Mode, the traditional Conquest mode, and new Team Deathmatch modes, among others, DICE has said recently that there is something for everyone in Battlefield 3.

These transitions of the multiplayer gameplay “makes it feel like so much more than your typical walled-in multiplayer arena”.  In fact, in just one of the maps that contains four areas, Gustavsson believes each area within the map could house a decent Team Deathmatch experience.  Since DICE has already said that they’ll be bringing back Team Deathmatch in Battlefield 3, I wonder if they’ll break down the larger maps and use them as the Team Deathmatch maps.