The latest news in the world of video games at Attack of the Fanboy
July 10th, 2011 by William Schwartz 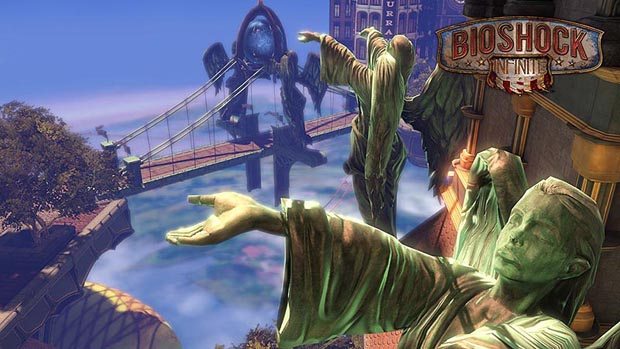 Bioshock Infinite just may be getting a multiplayer component claimed Ken Levine of Irrational Games in a recent interview.  The team that created the original Bioshock is hard at work with Bioshock Infinite, but fans want to know whether they’ll be getting a stand alone single player experience when the game launches in 2012, or if they’ll get better and revamped multiplayer addition similar to Bioshock 2.  If you’re a fan of the franchise, you know that Bioshock 1 & 2 were handled by completely different development studios.  Irrational Games which launched the 2007 single player classic, caught gamer’s attention with a ridiculously good narrative, in an atmospheric setting that stood out from anything we’ve ever played before.

The sequel Bioshock 2, was more of the same, almost to a fault.  Knowing that this was the case, 2K Marin tacked on a multiplayer component in the game, which was decent, but something short of the pedegree that most gamers associate with the Bioshock franchise.  Levine and company have already calmed the nerves when it comes to what to expect from the single player portion of the game, and it looks like we’ll be treated to a story of epic proportions, once again.  But will they decide to put multiplayer into the mix?  As it turns out, they just might.  Ken Levine told GTTV in a recent interview:

We’ve been experimenting with this [multiplayer], even during BioShock 1, and the question for us is always, ‘do we have something that really stands on it’s own, as an equal partner in the experience, not just a tacked on for the marketing department?'”

“We won that argument in BioShock 1.. If we think we have something that’s a valuable part of the experience that stands tall, but at this stage we haven’t determined that.”

At this point the single player looks to have the same sturdy legs as the original Bioshock if the 15 minute gameplay demo that rocked the gaming world is any indication.