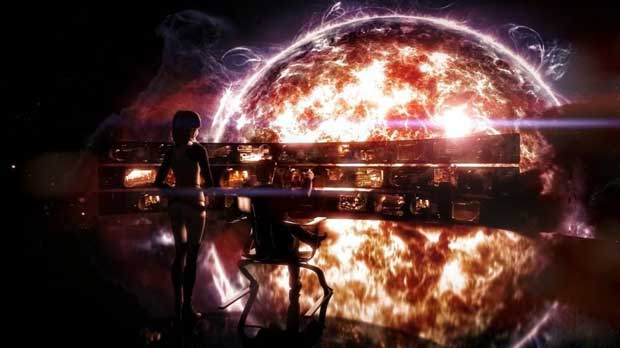 When Final Fantasy: The Spirits Within released in 2001, the film was a landmark in animation at the time.  It was a beautifully rendered movie that was not only visually stunning but may have been the inspiration for at least some of the Mass Effect franchise that we know and love today.  According to an Art Director for the game, he admits that many of the things you find in Mass Effect were inspired by the designs of The Spirits Within.

Yeah, you know we actually reference a lot from Final Fantasy: The Spirits Within. We used a lot of their GUIs and the way they did their ship – that was kind of like in some of the early designs for the Normandy.

Our attack helicopters are loosely based off that movie. There’s some great stuff, especially their glowing GUI screens; we used those a lot. I keep a folder of that stuff and I still actually tell the guys ‘just go back and look at that.’

The Mass Effect 3 Art Director, Derek Watts,  claimed in a recent interview.  Mass Effect 3 is scheduled to release in 2012 after recent delays pushed the game to next year.