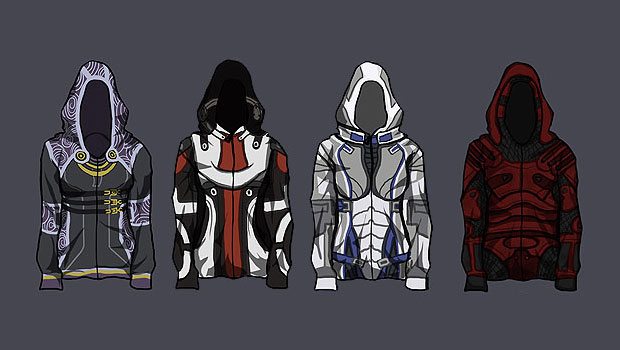 You may remember Christine Schott, better known by her deviantART user name, “lupodirosso.” Schott is a geeky fan of the Mass Effect universe just like you and I, but unlike us, she turned her nerdiness into pure, unadulterated awesomeness for the entire community to enjoy.

Schott designed a series of Mass Effect hoodies inspired by the franchise’s most popular characters and was smart enough to send along her ideas to BioWare in the off-chance that they’d actually be interested in selling such a thing. Lucky for her, and perhaps even more lucky for all of us, BioWare is very much interested, and they’ve contacted Schott informing her that the company loves the idea.

It goes without saying that the image you see above is not representative of the final product and is in fact the earliest prototype of Schott’s work. Schott herself will not even actually be churning out the final retail products, but instead will be handing her designs over to BioWare (presumably for a large chunk of money) who will take the idea from concept to physical commercial product.

“Chances are my hoodies are nowhere near the final product,” she said. “Afterall I’m no true designer and haven’t got the slightest idea what looks good on clothing and what doesn’t. I just conceptualized the idea. They [BioWare] will be redesigning the hoodies, and will sell a few as a trial run, and if it goes well more hoodies will be added I’m sure.”

We’re probably a few months away at least from seeing a plausible retail design, but if BioWare’s concepts look anything like the ones Schott drew up, you’ll most likely be seeing quite a few Asari, Quarians, and Krogan roaming the streets in the near future.