Next Black Ops 2 DLC Rumored to be Vengeance

The latest news in the world of video games at Attack of the Fanboy
June 18th, 2013 by William Schwartz 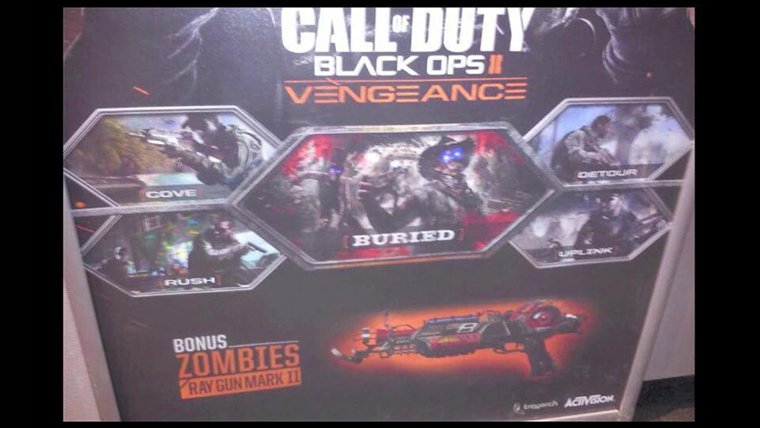 The next Call of Duty: Black Ops 2 DLC is rumored to be Vengeance, and will follow a similar structure as previous map packs.  According to a leaked image, The Vengeance Map pack will include four new multiplayer maps:   Cove, Rush, Detour, and Uplink.  Vengeance also comes with a fifth map for Zombies players, titled Buried.

The image also shows off that Zombies players will be getting a new weapon added to their arsenal.  The Zombies Ray Gun Mark II, which will be a bonus gun in the upcoming map pack if the rumor ends up being true.

Originally spotted by Redditors on the official Call of Duty: Black Ops 2 sub-reddit, some aren’t quite sure what to make of the rumor.  Some are claiming it to be fake, but it certainly appears to be authentic, or at least close to what has previously been used as marketing material in the past.

Activision still hasn’t officially announced when the next Black Ops 2 Map Pack will arrive, but Treyarch’s David Vonderhaar has begun teasing fans with a new image recently posted to Twitter.

Update:  Vengeance has been confirmed as the next map pack for Black Ops 2.  You can find a Black Ops 2 Vengeance Video Walkthrough, below